Read A Murder in Time Online

A Murder in Time 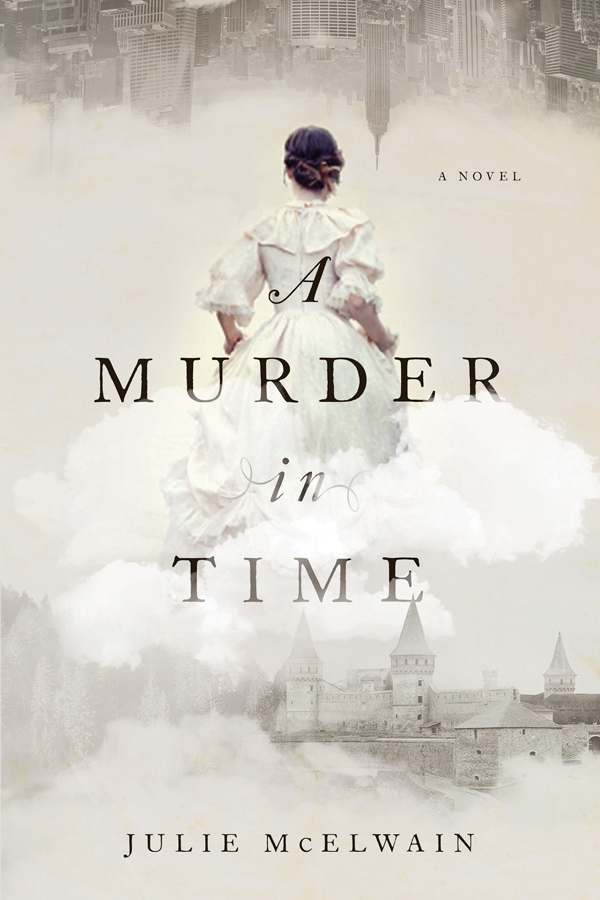 For my mom, the best woman I know

And in memory of my dad, who is still the wind beneath my wings

He was in hell.

The fire from the torches lent a satanic flicker to the cavern's rough-hewn walls, molten gold and orange playing over the profane carvings and frescoes. The oily smoke from the sconces undulated, curled, and climbed like thick black serpents toward the ceiling.

The effect pleased him.

The environment was similar to the West Wycombe Caves favored by Sir Francis Dashwood and his notorious Hell Fire Club. Like those caverns, these chambers, thirty-five feet in the bowels of the earth, had been carved out by earlier man, desperate for the flint within the chalky walls, needing the rock to fashion their archaic weapons and tools. Later, someone had transformed the rocky environment into two rooms. He suspected it had been the Papists during Good Queen Bess's rule. After she'd made Catholicism an act of treason, families who wanted to practice their faith had been driven undergroundâsometimes, like this chamber, literallyâfearing the priest-hunters and scandal, which could cost both their fortune and their lives.

Of course, he could not prove that these caves had been used for such a purposeâno stray religious relic had been left behindâbut it amused him to imagine that the pious had once prayed here.

It amused him to take the holy and make it unholy.

He smiled, just a small movement of his mouth, as he thought of the stonemasons and carpenters that he'd hired five years ago from London for this venture. They'd thought him mad. He'd seen how their eyes were drawn to some of his more inspired details in the specially commissioned friezes. He'd seen the shock. And something else . . .

They could not deceive him, even if they deceived themselves.
Fools
. He refused to lie to himself. He knew who he was. He knew
what
he was.

Still, he had something in common with the Papists. He couldn't risk exposure any more than they could. He knew that if he revealed his dark appetites, which twisted his guts to dagger points of both pleasure and pain, society would call him a monster.

It enraged him. He could feel the anger heating his blood, but he hid that, too.

Abruptly, he rose to his feet, the swift motion causing the dark velvet cape he wore to swirl around his calves like black mist. He would have enjoyed that effect, too, had he been aware of it. Yet he'd chosen the silk-lined cape not for its appearance, but for its warmth. No matter how many fire pits and torches were lit, it was impossible to dispel the chilly dampness in the underground catacombs.

The wine, of course, helped.

The men before him had been drinking steadily since the evening began, their faces flushed with claret as much as cold, and the anticipation of what he'd promised them. As he stood, they turned their gazes in his direction. In their dilated pupils, he saw the tiny flames from the candles and torches around them.

Almost carelessly, he lifted the jeweled chalice, surveying the twelve apostles he had selected for his secret club.

So young. So eager. So deliciously depraved.

“Patience, my brothers,” he ordered, and fleetingly wondered if he were addressing them, or himself.

The men laughed as though in agreement, and mimicked his gesture by lifting their own chalices, gold and silver, the metal a dull glint in the room's mottled light, and then drinking greedily. The wine had already robbed two of the young pups of their usual elegance. With a thin, cold smile, he watched them guzzle red wine, heedless when it ran in thin rivulets down their chins, staining their cravats like blood.

Even as he wondered how long they'd last, a sound, the scrape and soft slap of soles against hard stone, alerted him. The apostles heard the noise, too, and, one by one, the men fell silent. For a second, the dank air, heavy with the smell of wax and smoke, earth and brine, seemed to thrum with their expectations and peculiar excitement.

The shadows came first, bouncing off the walls in macabre distortions. Then the women rounded the corner, following the loyal servant who led them into the abyss, their dark hooded capes matching the style, if not the more expensive velvet fabric, of his apostles.

Initially, he'd considered ordering the women to dress as nuns, just as Dashwood had insisted for his Hell Fire Club more than sixty years before. As with the caves, he'd been inspired by Sir Francis's secret society, which had rocked England to its faithless core. But whereas the Hell Fire Club had been the ruination of many, he desired a more cautious path.

The men here thought it was a game, a bit of harmless debauchery against the rigid rules imposed upon them, against a lineage that was both a blessing and a curse. They were oblivious to the wild hunger inside him, the desperate need to satisfy his craving.

The women's awe at the cavernous hall was fast dissolving into nervous, ingratiating giggles. Several of them were trying to strike poses in the firelight to best show off their attributes despite the concealing cloaks they'd been asked to wear.

His mouth tightened with annoyance. That's what came from hiring whores. He'd instructed them to act innocent, but he supposed the concept was foreign to them.

Except for the little one.

Satisfaction eased aside some of his irritation as he observed her. He'd spent weeks hunting London's brothels for this particular venture. Through his emissary, he had picked thirteen of the soiled doves. Lydia was the only one he'd selected for himself.

She was young, probably not much older than fifteen. And, unlike the others, she was fresh. With her dark curls and apple-cheeked complexion, she exuded youth and innocence.

It was a sham, of course. But her eyes weren't quite as jaded as the other whores, and that appealed to him.

He set the chalice down on the long, pine serving table in the center of the room, and walked toward her, her smaller stature making her easy to identify among the relative anonymity of the cloaked figures. Her face was nearly hidden in the shadows of her hood, but he caught the nervous darting of her eyes as she glanced around. When she saw him, recognition flashed across her face and a smile trembled on her Cupid's bow mouth. Her cheeks flushed with pleasure as he reached out to grasp her slender wrist.

Her welcoming smile transformed into a surprised O when he yanked her across the cavern, to the jagged opening that formed a narrow passageway. Stopping abruptly, so abruptly that the girl stumbled into him, he turned back to the room and raised an arm.

“âDo As Thou Wilt,'” he quoted, borrowing once again from Sir Francis. His mouth curved with cold satisfaction as his apostles swooped on the harlots, and the chamber echoed with delighted laughter and thrilled screams. Distorted shadows danced against the cavern's walls. The game had begun.

Turning back into the passageway, his fingers tightening around the doxy's thin wrist, he yanked her behind him with little regard as he hurried down the tunnel. She had to run or be dragged.

“M-me Lord . . .” she gasped breathlessly. He didn't seem to hear her, as she was forced to race to keep up with his longer strides, the hood of her cloak falling to her shoulders, the dark curls tumbling around her pretty face.

A rustic oak door was at the end of the corridor. He stopped, releasing her to withdraw a key from his pocket. He tugged open the door, stepping aside in a courtly gesture that was sure to have her heart fluttering. With a flirtatious smile and a toss of her head, Lydia crossed the threshold, but he watched her coy sophistication crumble as her eyes drifted over the elaborate four-poster bed with its gleaming red satin sheets. Across the room was an enormous table and cupboard, the table scattered with at least twenty beeswax candles. Beneath that scent, one could detect other smells . . . sex, and something else . . . something not quite identifiable.

“Oh, la. 'Tis amazing, this,” she whispered, as her fingers worked on the knot at her throat, and the wool cape she'd been given for the night's pleasure slid off her thin shoulders to pool on the hard stone floor. He locked the door and began methodically stripping off his own cape and clothes, leaving them in a crumpled pile behind him as he walked, naked, toward her. He was already aroused.

Lydia smiled in a way that never failed to attract the rogues who visited Madame's establishment. Her smile slipped, though, when he reached her and, taking the muslin gown in his hands, shredded it in two in a swift, violent motion. Before she could cry out over its destruction, he was tearing her cotton chemise and short stays from her body, lifting her toward the bed.

“Lovely . . . so lovely.” His breath was hot against her flesh as he bore her down on the feather mattress. Shackling her delicate wrists above her head with one hand, he kissed his way down the slim white column of her throat to one small breast. Dress forgotten, she relaxed under the sensual onslaught, delighted to feel his mouth and tongue laving her. A soft sigh escaped her lips as she began to dream about a future that had nothing to do with Madame Duprey. A future far away from the fat, sweaty old men who came to see her at the academy.

To leave the house on Bacon Street, to have a place all her own . . .

The searing pain was so unexpected, she couldn't quite comprehend it even as her body jerked in reaction. Crying out, her eyes flew open in shock and met the man's as he lifted his head. Dread rippled through her as she saw the bright flecks of blood on his lips.

Even then it took her a moment to connect that to the hot, painful throbbing on her left breast.

Her eyes slewed downward. She felt a jolt of fear and horror as she caught sight of the wound.

The Blue Marble Gambit by Boson, Jupiter
The Boxcar Children by Gertrude Warner
Blazing Ice by John H. Wright
The Next Victim by Jonnie Jacobs
Pirates and Prejudice by Louise, Kara
First Love: A Superbundle Boxed Set of Seven New Adult Romances by Kent, Julia
038 The Final Scene by Carolyn Keene
Someone Like You by Cathy Kelly
Criptozoico by Brian W. Aldiss
A Moment of Truth: A Complete Bonus Set (A Matter of Trust #1-2) by Q. T. Ruby
Our partner