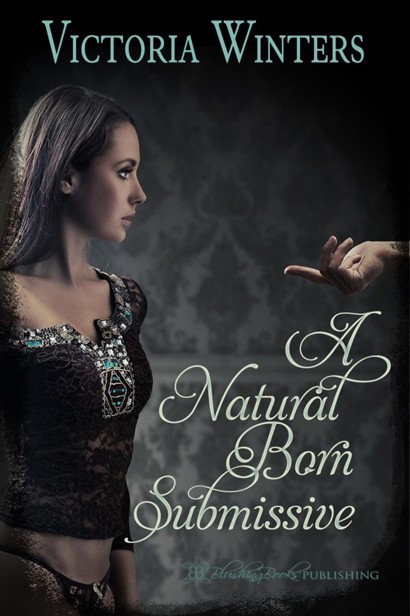 ©2014 by Blushing Books® and Victoria Winters

No part of the book may be reproduced or transmitted in any form or by any means, electronic or mechanical, including photocopying, recording, or by any information storage and retrieval system, without permission in writing from the publisher.

is registered in the US Patent and Trademark Office.

This book is intended for
adults only
. Spanking and other sexual activities represented in this book are fantasies only, intended for adults. Nothing in this book should be interpreted as Blushing Books' or the author's advocating any non-consensual spanking activity or the spanking of minors.

She turned slowly as her eyes became accustomed to the darkness.  There was just enough light to make out a stage, a large dance floor and some furniture – tables and chairs and a padded bench with cuffs hanging off the sides.  A nearby wall held an assortment of titillating implements.  As she backed away from it, she felt something solid against her back and turned to see a cage suspended from the ceiling.  Reaching out a tentative hand, she touched it and stood watching for a moment as it swung back and forth.

"Hello, is anyone there?" she called out, willing herself not to bolt.  No answer.  Again her eyes were drawn to the wall with the strange display and she hesitantly walked over to take a closer look.  There was a rattan cane with a curved handle, what appeared to be a riding crop, a formidable-looking paddle with the words "Board of Education" inlaid on it, various whips, a martinet – at least that's what she thought it was – with a handle and several thin strands that had some sort of metal attached to each of the ends.  Alice didn't even consciously realize that her hands had gone behind her to cover her bottom.

"May I help you?" a deep, sonorous male voice whispered in her right ear.  Alice spun around, startled, to find herself face to face with a most unusual man.
A vampire
, was her first thought, then she bit her lip at her own foolishness.
Vampires don't exist
, she reminded herself, although if they had, this guy would have fit the bill.  He was tall with dark hair that fell down to his broad shoulders.  His toned torso tapered to a slender waistline.  Even his clothing was old-fashioned – a loose white shirt tucked into fitted pants that were tight in all the right places.  But it was his eyes that caught her attention.  They were a surprising light blue and shone in the darkened room.  There was something timeless about the man, although on closer inspection he looked to be about her age – in his mid-forties.

Alice put out her hand and introduced herself in her most professional manner.  "Hi, I'm Alice Chappelle, the producer of Channel 2's
Talk Of The Town
.  I have an appointment with Victor Priest."

The man took her proffered hand in both of his and held it for a moment.  Alice couldn't help but smile to herself.  His hands were warm, ruling him out as one of the undead.

Stop that, now!
she scolded herself.
You are not some teenage girl, hung up on the paranormal.  Pull yourself together.

"And you are?" she asked the unusual gentleman who still had a firm grip on her right hand.

"I am Victor Priest, and welcome to my little club, The Beaten Path.  Please come in, Miss Chappelle, and have a seat."

Victor studied Alice as he spoke, observing that she was a very pretty lady in her prime, who was just beginning to show the first signs of aging in the form of faint lines around her eyes and mouth.  He loved women at this stage of life.  They possessed a beauty that had ripened with maturity, along with elegance and vibrancy that came only with life experience.  But Victor sensed something else in Alice, a shy vulnerability that he found both intriguing and contradictory, given her profession.  Watching her as she'd glanced nervously around, he couldn't help but wonder if she were a closet submissive.

Suddenly Alice felt terribly self-conscious as he led her to a waiting chair.  Mr. Priest seemed to be sizing her up, openly looking her up and down.  She had twisted her long dark hair into a sleek bun that morning, and now she found herself reaching up to check that it was still in place and wondered if she should not have left it down.  She adjusted her dark-rimmed glasses and tugged at the tight skirt of her dark business suit as she walked.

Stop fidgeting!
she told herself
.  It's an interview, not a date!

"Do please sit down, Mr. Priest,"she said.  His standing was making her nervous, as if he didn't intend for the interview to last long, but she had a list of questions about the club  and hoped the answers would give viewers an insight into why it might be popular.

"Tell me, Mr. Priest …" she began, when he continued to stand.

"Victor," he corrected her.

"Victor, I've heard stories about this club.  What kind of people does it attract?"  She had pulled out a pad of paper and clicked her pen, getting right down to business.

"Do they tend to come in as couples, or is it a place where one can find someone to dominate or to--to submit to?" she asked, angry at herself for stammering.  She looked down at her notepad, avoiding the gaze that threatened to draw her in, and wondered if his magnetism would be as apparent on camera.

"Let me ask you, Alice – how did you find out about my little club?" Victor asked.

"I remembered reading an article about the club in a
Vegas Weekly
a while back.  We are always looking for unusual people and businesses to feature on our show.  Why do you ask?"

"The people who are drawn to The Beaten Path usually find us on their own."

Victor studied Alice, trying to read her emotions.  His initial impression of her was that she was completely professional, but now she seemed scattered, nervous.  And he also detected something else:  dishonesty.  The article she was referring to had come out two years prior and had been a very small piece.  That she had chosen to follow up on it suggested that her interest was more personal than professional.  He decided to play along, pulling out a chair, sitting across from Alice, and crossing his long legs.

Alice glanced at him, adjusted her glasses, and continued:  "So let me get this straight--people who have fantasies about being submissive or having someone to dominate can live out their fantasies here.  Is that correct?"  She blushed, realizing she'd not gone beyond asking him to expound on her original question.

What's wrong with me?

"Yes my dear, but it's much, much more than that.  Here one can find their other self, their guide who will introduce them to a whole new world.  Would you like to give it a try?" Victor asked, hiding a smile as he watched Alice flounder, struck speechless by the unexpected directness of his question.

She fumbled with her notepad as she shook her head.  "No.  Of course not.  It's not my cup of tea.  No.  I've never even thought about submitting to a man."

She glanced up to see a slow smile spread across his handsome face.  "I said nothing about being submissive or with a man, my dear.  You could instead be dominant with a man or woman."

Alice felt her flush deepen as she realized he was toying with her, and inwardly cursed her stupidity at allowing it.

You're an objective professional.  That's why you're here, Alice. You can do this!

"That's an interesting perspective, Mr. Priest," she said, and forced herself to look at him.  "I don't know if you've ever seen our show, but we like to inform our conservative local viewers about unusual activities going on in our city.  Do you think your club would be right for that?  Would you be interested in opening the club for a piece on what it is you offer?  It might help educate some people.  I know it would certainly get them talking."

"I don't think I can help you, Miss Chappelle.  The members of The Beaten Path find their way here.  Most are very private, and I'm quite sure most would not be willing to allow themselves to be filmed.  Of course, I may be wrong.  Why don't you stay and see for yourself?"

"I--I … well, perhaps I could bring our show host, Katt Templeton, back with me tonight and see what she thinks.  Would that be all right?"

"It would," he said, thoughtfully.  "However, I strongly suggest that you at least attempt to blend in so that our patrons will not feel that they are being observed in too clinical a fashion."

"Of course, of course, no problem whatsoever," Alice reassured him, but then a thought occurred:  "Um, how would one dress to blend in around here?"

"Wear black," was all the help Victor gave.

"Of course.  You can't go wrong with black, right?" Alice asked, forcing a smile as she stood to shake his hand.  Once again he held her hand rather than relinquishing it, and Alice felt herself grow warm and flushed at the contact and then gave a little gasp as he leaned forward and kissed Alice first on one cheek and then the other.

"That is how we say goodbye where I come from," he explained.

"Oh … well … goodbye.  Until later." She mumbled a hasty thank you as she exited, relieved to finally reach her car.  Once inside, she reached for her Manilow's Greatest Hits CD and pushed it into the player, her go-to selection for those times when she felt stressed or nervous.  Barry's tender voice made her instantly relax, the strains of
Ready To Take A Chance Again
enveloping her like an old friend as she pulled the car from the lot of The Beaten Path.  As she drove, Alice pulled the band out of her hair, releasing the long tresses from the confinement of the bun and rolling down the window so the wind could ripple the long strands.