A Non-Blonde Cheerleader in Love 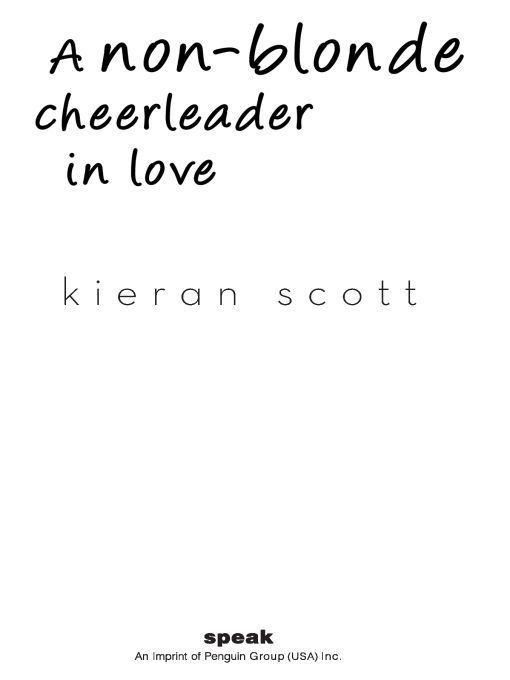 Guys? On the cheerleading squad?

“All right! Let’s get this meeting started!” Coach announced.

Then the door opened again and everyone fell silent. The distinct sound of boy laughter was followed by the appearance at the door of none other than Daniel Healy. My Daniel Healy. My gorgeous, beautiful, non-wrestling, guitar-playing Daniel Healy. Who was, apparently, very good at keeping a secret.

“You’ve
got
to be kidding me,” Sage said.

My jaw dropped like a stone. Daniel looked at me, smirked and sauntered into the room. Clearly he was enjoying the expression of total stupefaction on my face. But the shock didn’t stop there. He was followed by Terrell Truluck, wide receiver extraordinaire; Steven Schwinn, intrepid
Weekly Catch
reporter; and a big, beefy Asian kid who, for some reason, I knew to be named Joe. A few other guys trickled in and together the boy brigade filled up the back row.

I could
feel
the total bafflement of my squad mates. Meanwhile, Coach Holmes’ smile nearly engulfed the room.

Daniel gave me a jaunty wave, loving every minute of this. I tried to lob back a look of death, but just ended up grinning. Daniel on the cheerleading squad? This could be so,
so
cool!

OTHER BOOKS YOU MAY ENJOY 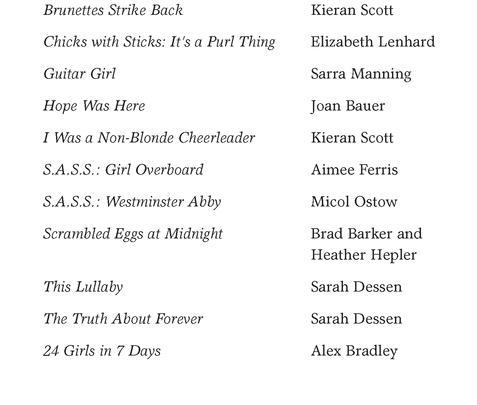 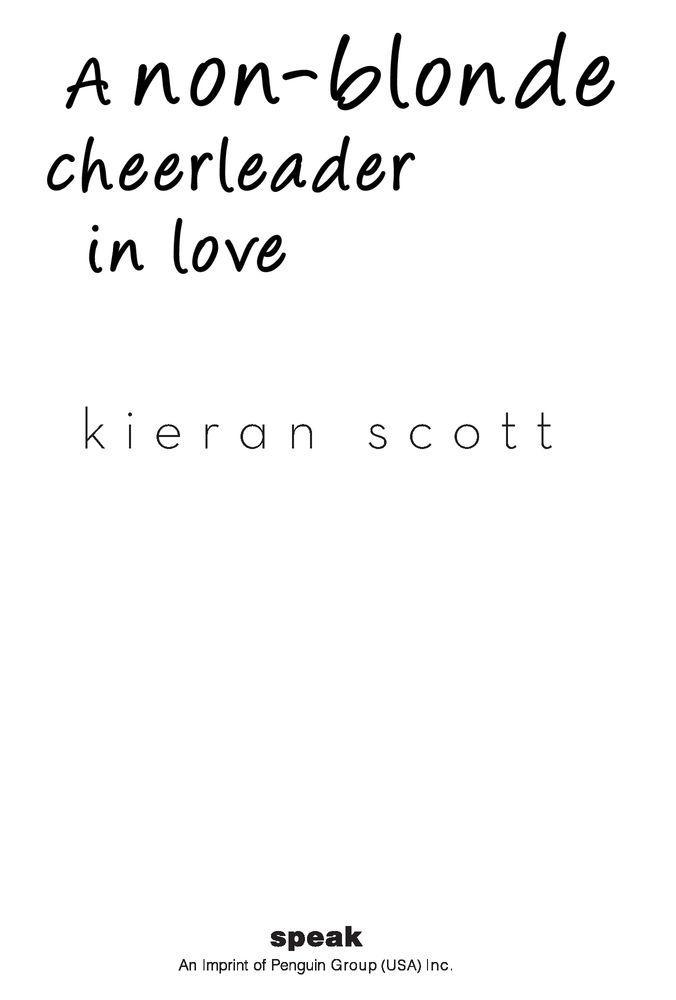 First published in the United States of America by G. P. Putnam’s Sons,
a division of Penguin Young Readers Group, 2007
Published by Speak, an imprint of Penguin Group (USA) Inc., 2008

THE LIBRARY OF CONGRESS HAS CATALOGED THE G. P. PUTNAM’S SONS EDITION AS FOLLOWS:
Scott, Kieran, 1974-
A non-blonde cheerleader in love / Kieran Scott.
p. cm.
Summary: When the Sand Dune High cheerleading squad goes coed, Annisa and the rest of
the team must learn to get along without turning the season into a battle of the sexes.

The publisher does not have any control over and does not assume
any responsibility for author or third-party Web sites or their content.

Special thanks to my All Star cheer squad:
Sarah Burnes, Jen Bonnell, Wendy Stewart, Shira Citron and
Ally Stevenson, all of whom always make me feel like I can do no wrong.
(You guys can fight over who gets to be captain.)

As always, I’d also like to thank my family, Mom, Erin and Ian,
for their encouragement, support and, well, their plain old silliness.

To my myspace cheerleading friends and all the fans who have written
to me, thanks for keeping me in the know and inspiring me every day.
As long as there are girls as fabulous, intelligent and positive as you
out there, I know there’s a reason to keep on working!

Most of all, thank you to Matt, who just keeps making me happy.

“He’s coming, everyone!” Tara Timothy hissed with one of her patented no-nonsense glares. “Get ready!”

The dozens of students and faculty members that had gathered in the lobby for the impromptu wrestling pep rally instantly fell silent. No one messed with Tara Timothy, fear-inspiring leader of the Sand Dune High cheerleading squad. Excuse me, the
national champion
Sand Dune High cheerleading squad. We had just won at nationals a few weeks back and I still liked the ring to our nifty little title. Sometimes I still couldn’t believe that I, Annisa Gobrowski, former member of a fairly uninspired cheer squad from New Jersey, was now a member of the greatest squad in the land.

I stood on my tiptoes to see through the glass doors of the school. Sure enough, K. C. Lawrence’s blue Jeep Wrangler had just pulled into a space near the top of the parking lot.

Together with the rest of the squad, I backed up under the light-blue-and-yellow “Pin ’Em Crabs!” banner we had all worked on at Tara’s house the night before. Suddenly I felt someone’s arms encircling my waist from behind.

My heart fluttered around in my chest as his warm breath made goose bumps pop out all over my skin.

“Hey, yourself,” I replied over my shoulder, feeling oh so cutesy coupley.

Daniel, blond, tan and
huhmana-huhmana
as ever, quickly smooched my cheek. Yes,
my
cheek. He was my very own hunk of boyfriendly perfection. Mine all mine. Daniel was my very first boyfriend and, even better, this was going to be my very first Christmas
with
a boyfriend. That’s right, the holiday to end all holidays was just around the corner and with Daniel in my life I had
so
much to look forward to. Kisses under the mistletoe, long walks in the snow . . . I mean, the sand . . . Ah, it was going to be perfection. When I had moved to Florida from New Jersey a couple months back, I had thought my life was pretty much over. But lately things were seriously looking up.

Daniel gave me a squeeze and whispered in my ear again. “I missed you.”

“You walked me to school ten minutes ago,” I told him, blushing.

“Longest ten minutes of my life,” he replied.

“Ugh. Could you guys be any more dramatic?” Sage Barnard said, flipping her Jessica Simpson curls over her shoulder. “Spare us.”

Sage shot us an irritated scowl—as she always did whenever Daniel touched, kissed or even breathed the same air as me—then moved to the other end of the squad line. I didn’t know what her problem was. She and Daniel had been broken up for a couple of months now and she already had a new boyfriend. His older brother Christopher.

“So, how does it feel to be a civilian?” I asked Daniel.

Daniel was not in a shirt and tie like the rest of the wrestling team because he had recently quit so he could concentrate on his music—guitar, to be exact. I was still proud of him for standing up to his father and Christopher—who was a senior and still on the team. Until this year both Daniel and Christopher had played football in the fall, wrestled in the winter and run track in the spring. They were so alike that Christopher’s friends took to calling Daniel “Mini-Chris.” But now that Daniel had found his own thing, they’d have to come up with a new nickname.

“Here he is! Healy, back off!” Tara demanded, thrusting one of her poms at him.

Daniel instantly released me and took a few steps back, hands raised.

Moments later the glass door swung open and K. C. Lawrence, superstar of the SDH wrestling team, walked in. K.C. was on the short side (good wrestlers often are, I’m told—something to do with center of gravity), but totally buff. He was perpetually tan, as most of the kids around here were, and you could see the green of his eyes from about a mile away. He also had long, blond surfer hair that just grazed his shoulders.

Ride 'Em (A Giddyup Novel) by Delphine Dryden
On Immunity : An Inoculation (9781555973278) by Biss, Eula
Army Of The Winter Court (Skeleton Key) by Ali Winters, Skeleton Key
The Savage Grace: A Dark Divine Novel by Despain, Bree
Victoria Holt by The Time of the Hunter's Moon
Sweet Beginning by V. M. Holk
The Curiosity Keeper by Sarah E. Ladd
Stacking the Deck (A Betting on Romance Novel Book 2) by Cheri Allan
Immortal by Bill Clem
Rendezvous by Sami Lee
Our partner