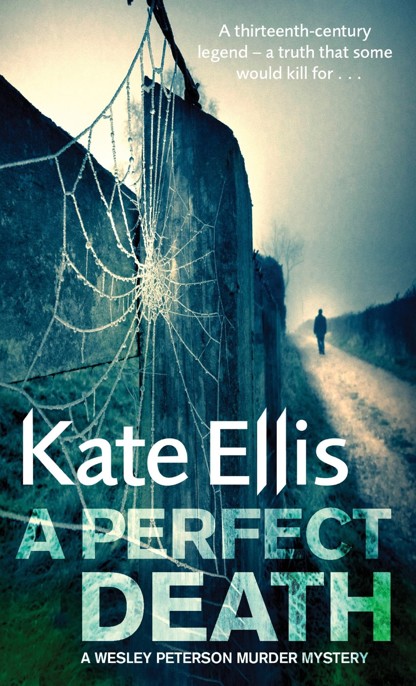 Kate Ellis was born and brought up in Liverpool and studied drama in Manchester. She has worked in teaching, marketing and
accountancy and first enjoyed literary success as a winner of the North West Playwrights competition. Keenly interested in
medieval history and archaeology, Kate lives in North Cheshire with her husband, Roger, and their two sons.

For Cal and John

‘This is the place.’

Something in those whispered words made the young woman shudder.

‘You’re scaring me,’ she whispered. She had come this far to learn the truth and she wasn’t going to give up now, even though
all her senses were screaming that something wasn’t right.

Her companion was moving fast, leaning slightly with the weight of the holdall. Not for the first time she wondered what was
in it. They had almost reached the hedgerow at the end of the field and she could just see the river through the gaps in the
trees, oily dark, swelling and shifting in the moonlight.

She could hear the water lapping drowsily against the shore but the sound of her companion’s voice in the darkness ahead broke
the river’s sleepy spell. ‘It happened around here.’

‘Her execution. This is where she was burned to death.’

Suddenly she knew that going there had been a dreadful mistake. But it was too late now for escape. Her companion had begun
to walk towards her, determined and mechanical. And in that lonely spot there was nobody around to hear her scream.

It hadn’t rained for ten days and the ground was tinder dry. Perfect kindling for a fire, she thought with terrifying foresight.
She felt a sharp blow to the side of her head and stumbled, stunned and helpless, to the ground, grabbing at her attacker’s
clothing. Then she felt her arms being pinned roughly behind her back and something being wound around her wrists: something
hard, a strap or a belt. Finding a sudden strength, she tried to lash out but another blow landed and everything went dark.

As the cold liquid splashed about her some of it landed on her face and brought her back to consciousness for a few moments.
She coughed with the stench. Now she knew what the holdall had contained. Petrol.

There was a sound like rushing wind as the vapour caught alight and when the flames began to lick at her limbs her body jerked
with shock as agony overwhelmed her.

Her screams died away on the salty air. And through the flames she could just make out her executioner’s face, masked with
a grubby handkerchief to block out the heat and the stench of burning flesh, as the fire consumed her like a voracious animal.

Then came the silence. The silence of the dead.

Legends. All we have is legends. But in every legend there is a grain – or perhaps more than a grain – of truth.

I first read the story in a book of Devon tales. I took little notice back then but, when I began to help Yves with his work,
I remembered that story and began to delve further.

The legend of the burning girl – or the burning bride – had been recorded over the years by various local storytellers and
historians. A lord, so the story goes, went to the Crusades and returned with a bride he’d rescued from the flames as she
was about to be burned as a heretic. The only crusade that appears to fit is that in the Languedoc against the Albigensians,
as there are no accounts of anyone actually being burned for heresy during the campaigns in the Middle East.

Legends. How they confuse and mislead. And yet I am sure I’m getting near the truth. I even know the name of the burning girl.
Jeanne de Minerve. Jeanne the Heretic. I sympathise with Jeanne because I too am a heretic of sorts: a seeker after truth
who won’t be fobbed off with what I’m told.

(From papers found in the possession of Professor
Yves Demancour)

Wesley and Pam Peterson had no idea that they were being watched as they sat at the restaurant table. The watcher sat in the
shadows of the Calvary Garden smoking a cigarette on the stone steps of the central cross while, somewhere on the other side
of the square, the small, dark haired singer – a devotee of Edith Piaf – assured her audience that she regretted nothing,
her voice quivering with passion.

Pam raised her hand and pushed her straight brown hair off her face before looking round. It seemed that every cobble of the
ancient Place Marcou was utilised, crammed with the tables and chairs of a dozen rival restaurants, and the strings of lights
around the square gave the place a festive look as an army of waiters in black T-shirts scurried around with trays held high.

‘How was the pudding?’ There was a note of anxiety in Wesley’s voice.

Pam patted her stomach, took a long sip of red wine and slumped back in her seat with a blissful smile on her face.

Wesley leaned forward. ‘What do you fancy doing now?’ He hesitated for a second, looking into her eyes. ‘Early night?’

Her hand came to rest on his. ‘Sounds good.’ Then the smile turned into an apologetic grin. ‘Mind you, I’ve eaten far too
much, so how about a quick walk round the walls first, eh?’

‘OK. If you want,’ said Wesley with an understanding smile. A romantic walk before returning to the hotel was fine by him.

It was dusk but the air was still comfortably warm.
For a precious week Wesley and Pam had had the freedom to do as they pleased without jobs or children to consider. At first,
having lost the habit of spontaneity, they had hesitated to make the most of it, like caged birds suddenly shown an open door
to the outside world. It had taken two days in the Languedoc sun with no decisions to make, apart from which restaurant to
choose, before they began to relax and enjoy the old walled city of Carcassonne.

As soon as the bill was settled, they stood up, their chairs scraping on the cobbles. Pam slipped her hand into Wesley’s and
as they strolled out of the square the singer moved on to “Chanson d’Amour”.

‘This is the life,’ he heard Pam mutter to no one in particular as they started to weave their way through the narrow streets
hand in hand, past the tables of what seemed like a thousand restaurants. When they reached the paved square in front of the
cathedral of Saint Nazaire, they rested on a stone bench for a few leisurely minutes, staring up at the leering gargoyles,
before wandering on towards the walls.

Once they had passed through the shadowy gateways of the Tour Saint Nazaire, they found themselves on the wide gravel path
between the concentric walls. Wesley squeezed Pam’s hand and she smiled up at him. Before the holiday she’d seemed a little
preoccupied, as though there’d been something on her mind … something she was reluctant to share with him. But that might have
been his imagination. She might have just been tired after a long term of teaching.

Although it was quieter here between the walls than
in Carcassonne’s bustling streets and squares, a lot of tourists were still out and about taking the evening air. But, once
they had passed the Porte Narbonnaise, they suddenly found themselves alone watching the swifts and bats swooping and wheeling
between the towers in their nightly show of prowess. Wesley felt Pam’s hand slip around his waist and he was overwhelmed by
a sudden wave of happiness. This really was the life – reality could wait.

Then a sudden sound made him turn his head and he thought he caught a glimpse of something in the corner of his retina: a
slight movement in the shadows of a doorway leading into one of the outer towers, which was topped by a cone of slates. But
he told himself that it was probably his imagination. A place like this, with its history of sieges and bloody battles, was
bound to retain echoes of suffering in its warm, glowing stones. That was how ghost stories began.

As they strolled on, Pam stopped every now and then to shake the sandy gravel out of her sandals. They passed a French couple
with two young children trotting obediently by their mother’s side and Wesley saw Pam shoot them an envious look. If Michael
had been there with them he would have been asking constant questions and Amelia would have been whining about some imagined
discomfort. But tonight this wasn’t their problem. The children were back in Devon with Wesley’s sister. And the world of
police and crime couldn’t touch them. Not even Gerry Heffernan’s influence could stretch this far.

It was growing darker as they reached the Porte de
Rodez and the towers around them glowed golden in the newly lit floodlights.

Pam broke away from her husband and climbed the steps up to the parapet walk, where she paused to stare out over the Ville
Basse, Carcassonne’s newer, sprawling city spread out below them like a sea of twinkling lights. Wesley stood at the foot
of the steps feeling content and slightly tipsy with the wine he’d had at dinner. Perfectly at peace with the world. And totally
unaware that something was about to shatter his leisurely idyll.

A man’s voice spoke his name almost in a whisper and Wesley’s heart began to beat a little faster as the tranquil spell was
suddenly broken. He swung round and saw a tall figure standing a few yards away but in the deep shadows cast by the city walls
he found it hard to make out the newcomer’s features.

Wesley held his breath as the figure stepped forward: a man around his own age wearing faded jeans, a washed-out black T-shirt
and a tattered ethnic scarf around his neck. His mousy hair was long and in his left hand he carried a guitar case.

Wesley stared at the half-familiar face – at the freckled snub nose and the wide mouth fixed in a semi-permanent crooked smile
– and long-distant memories of his early days at university gradually began to stir in his brain. ‘It’s not Ian, is it? Ian
Rowe?’

The man’s smile widened and suddenly Wesley
knew he was right. But Rowe looked different: thinner and more careworn. The Ian Rowe he’d known back at university was well
built, verging on the plump, with a penchant for bright shirts and partying. That Ian Rowe had dropped out of his archaeology
course at the end of his second year after failing his exams. And the detective in Wesley couldn’t help wondering what had
happened to him in the intervening years. And how he came to be here in the south of France just as he and Pam were having
a cosy few days
à deux
.

He nodded towards Pam, who was standing on the ramparts, watching them with curiosity. ‘I recognise your girlfriend … wasn’t
she at …?’

‘How very grown up,’ Rowe said with a hint of bitterness. ‘But you always were grown up, weren’t you, Wesley Peterson?