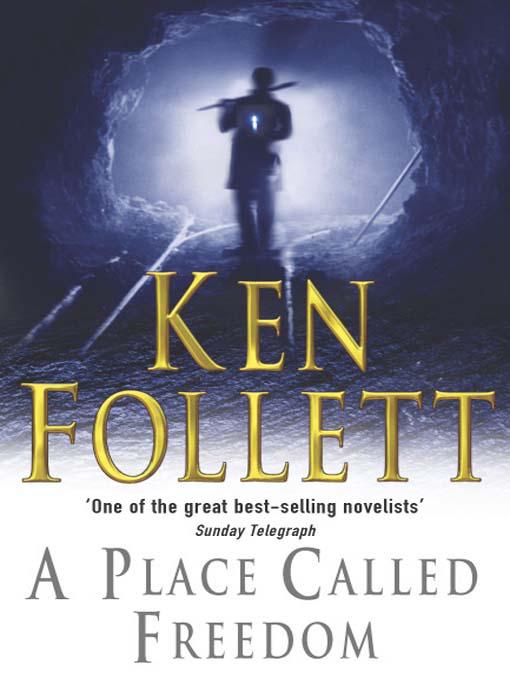 “Follett keeps the pace fast and the writing crisp.”

“The action and the tension should keep fans happily turning pages.”

A DANGEROUS FORTUNE
NIGHT OVER WATER
THE PILLARS OF THE EARTH
LIE DOWN WITH LIONS
ON WINGS OF EAGLES
THE MAN FROM ST. PETERSBURG
THE KEY TO REBECCA
TRIPLE
EYE OF THE NEEDLE
A PLACE CALLED FREEDOM*
THE THIRD TWIN*
THE HAMMER OF EDEN*
CODE TO ZERO
JACKDAWS
HORNET FLIGHT

Published in the United States by Fawcett Books, an imprint of The Random House Publishing Group, a division of Random House, Inc., New York, and simultaneously in Canada by Random House of Canada Limited, Toronto.

Fawcett is a registered trademark and the Fawcett colophon is a trademark of Random House, Inc.

This edition published by arrangement with Crown Publishers, Inc.

Dedicated to
the memory of
JOHN SMITH

I did a lot of gardening when I first moved into High Glen House, and that’s how I found the iron collar
.

The house was falling down and the garden was overgrown. A crazy old lady had lived here for twenty years and never given it a lick of paint. She died and I bought it from her son, who owns the Toyota dealership in Kirkburn, the nearest town, fifty miles away
.

You might wonder why a person would buy a dilapidated house fifty miles from nowhere. But I just love this valley. There are shy deer in the woods and an eagles’ nest right at the top of the ridge. Out in the garden I would spend half the time leaning on my spade and staring at the blue-green mountainsides
.

But I did some digging too. I decided to plant some shrubs around the outhouse. It’s not a handsome building—clapboard walls with no windows—and I wanted to screen it with bushes. While I was digging the trench, I found a box
.

It wasn’t very big, about the size of those cases that contain twelve bottles of good wine. It wasn’t fancy either: just plain unvarnished wood held together with rusty nails. I broke it open with the blade of my spade
.

There were two things inside
.

One was a big old book. I got quite excited at that: perhaps it was a family Bible, with an intriguing history written on the flyleaf—the births, marriages and deaths of people who had lived in my house a hundred years ago. But I was disappointed. When I opened it I found
that the pages had turned to pulp. Not a word could be read
.

The other item was an oilcloth bag. That, too, was rotten, and when I touched it with my gardening gloves it disintegrated. Inside was an iron ring about six inches across. It was tarnished, but the oilcloth bag had prevented it from rusting away
.

It looked crudely made, probably by a village blacksmith, and at first I thought it might have been part of a cart or a plow. But why had someone wrapped it carefully in oilcloth to preserve it? There was a break in the ring and it had been bent. I began to think of it as a collar that some prisoner had been forced to wear. When the prisoner escaped the ring had been broken with a heavy blacksmiths tool, then bent to get it off
.

I took it in the house and started to clean it up. It was slow work, so I steeped it in RustAway overnight then tried again in the morning. As I polished it with a rag, an inscription became visible
.

It was engraved in old-fashioned curly writing, and it took me a while to figure it out, but this is what it said:

This man is the property of
Sir George Jamisson of Life
A.D.
1767

It’s here on my desk, beside the computer. I use it as a paperweight. I often pick it up and turn it in my hands, rereading that inscription. If the iron collar could talk, I think to myself what kind of story would it tell?