Read A Pocketful of Holes and Dreams Online

A Pocketful of Holes and Dreams 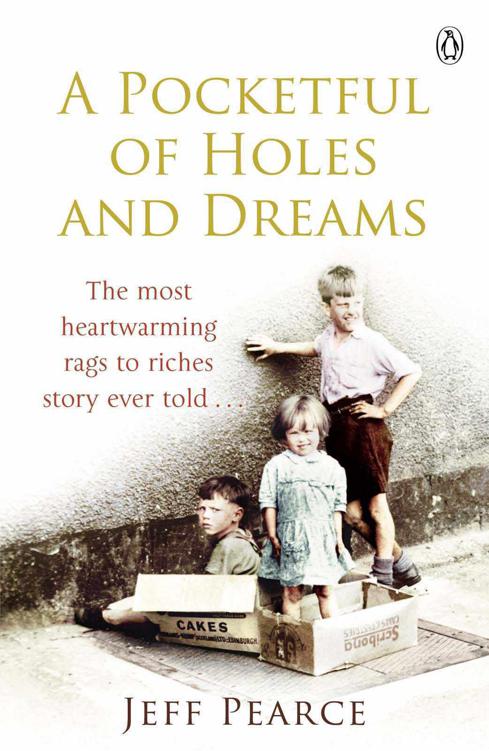 A Pocketful of Holes and Dreams

Jeff Pearce was born in the slums of Liverpool in 1953, and from the moment he could walk he worked with his mother selling secondhand clothes on a market stall. Leaving school at the age of fourteen, unable to read or write, he embarked on an amazing journey that would see him make and lose millions in the ‘rag trade’ before eventually winning the highest accolade the fashion business had to offer. He is retired nowadays and lives on a small farm in Cheshire with his wife, Gina, two Argentinean polo ponies, Susie the dog and Daisy the cat.

To find out more, visit
www.jeffpearce.co.uk

I am eternally grateful to Kit Knowles, my friend and part-time assistant who has deciphered my hieroglyphics, dotted the ‘i’s and crossed the ‘t’s patiently over the past years. A special thank you to Lesley, for being on the other end of the phone whenever I needed her input on the family history; and just for being my big sister. A big thanks to my author friend George Skelly for his help and advice when I most needed it. Thanks to my good old mates Matt Barr and Danny Tallon, whose enthusiasm encouraged me to keep going and to finish my book. To my agent, Luigi Bonomi, for believing in me, and I cannot thank all at Penguin enough for helping me tell my story to the world.

A Pocketful of Holes

In loving memory of Elsie, my mother, for having given me the greatest gift a son could ever wish for.

This book is also dedicated to three other women in my life, Gina, Katie and Faye, for all their love, laughter and support over the years; with particular thanks to Gina, for literally being my writing hand.

3.   One Thing after Another

26.  The Human Spirit Shines Through

If only the Boss could have been more of a father. But he wasn’t. There were times when he seemed to live in a completely different world to the rest of us. I rarely saw him while I was growing up, and if I did it was when I came home from school, when I would find him shaving over the kitchen sink.

Seeing me standing there, he’d put his hand in his pocket, jingling coins before taking out half a crown. ‘Son, go and get me a pack of twenty Rothmans King Size and a packet of Seven O’Clock razor blades,’ he’d say. He only smoked Rothmans. Other brands like Woodbines and Senior Service were too common for him.

Getting himself ready for work was an afternoon ritual, with Mum waiting on him hand and foot, treating him as if he was a Hollywood movie star. Dad modelled himself on Clark Gable – so many people had told him he was the mirror image of him. Mum made sure his shirts and collars were freshly laundered, with starched collar and cuffs, and he always wore a tie and a pair of gleaming cufflinks.

And his preparations didn’t end with a shave and a clean shirt. He’d blacken his moustache with a cosmetic pencil and apply vast amounts of Brylcreem to his thick black hair, positioning the waves carefully and frequently checking his reflection in the mirror. His vanity needed constant reassurance of his good looks; it was an attention to detail bordering on the obsessive. He’d even turn his shoes over to check that Mum had polished the arch on the sole as well as the uppers! She was very much his ‘gentleman’s valet’.

Despite his failings as a provider, Mum adored him and dreamt that, one day, he would change, becoming the perfect husband and a good father to his children. But, in reality, my father lived a lie, just pretending to the world that he was an affluent man. He certainly looked the part.

Once he was away from home, his young family ceased to exist. He’d do anything for his ‘cronies’, as Mum called them, giving them his last penny, knowing full well he’d never see it again; and they would feed his ego with compliments and flattery. They were the ones who nicknamed him ‘The Boss’, and being the weak person he was, he was easily caught up in their lies. He lived in a make-believe world, playing the part of a wealthy businessman. He refused to grow up, turning his back on his true responsibilities towards his family and his wife.

He part-owned a black taxi cab with one of his best friends, Nobby, who lived a couple of streets away. Nobby worked the day shift while my father did nights. Working out of the clubs on the seedier side of town, he’d chauffeur the prostitutes and their clients to and from the ships that were in dock at the time. It was a lucrative business for him as well as the girls, earning him at least £5 for a return trip.

Besides seeing him in the afternoons, the only other time I occasionally saw him was in the morning when I left for school. He didn’t look well groomed and tidy then. He’d be slouched in the chair, stinking of booze and tobacco, and he’d look almost frightening, with bloodshot eyes, his hair an untidy mess and his tie askew. We wouldn’t bother talking to him then. He couldn’t string a sentence together he was so drunk.

Until I was old enough to work with him, he only took me out on one occasion, and that was because Mum forced him to, pointing out that he never took his children anywhere and that a boy should spend time with his father.

We went to Southport, a coastal resort town famous for its amusement arcades and funfair. Most of the kids in our street had been there, and they told me all about it. We had to make an early start, but I was so excited I was sitting on the front step dressed in my Sunday best eagerly waiting for our special day together. We took the bus to a railway station, where we caught the train. I can’t remember much of the two-hour journey. I guess anticipation made the time fly.

When we arrived, I could see the big wheel of the fairground in the distance, slowly going around, the carriages full of people laughing and waving. That would be me soon, I thought to myself, clasping my father’s hand firmly in mine. I was terrified of losing him in the crowd.

At the fairground, Dad put me on a couple of the smaller rides, saying we could have a go on the bigger ones later. He bought us each an ice-cream, and I was really beginning to enjoy myself, looking around and planning which ride I would go on next.

While we were walking along, Dad bumped into a man he knew. The man had his three sons with him, all slightly older than me. Like us, they were there for a day out together. We joined them, Dad talking to his friend, me trailing along behind the three older boys, who ignored me. I felt much smaller and younger than them, so I just kept quiet, thinking about the adventures to come.

After a few minutes, we stopped outside a pub. Dad put his hand in his pocket and pulled out a half-crown. ‘Take this, son,’ he said. ‘I’m going in here for a pint with my friend, so you run along with these lads and have fun. Just be good and don’t get lost. Don’t worry about me – I’ll be in here.’

As Dad and his friend disappeared inside, I turned around to the other boys, but they had vanished. I caught sight of them running into the fairground, and reckoned they must have been so excited at the thought of spending the money their dad had given them they forgot to wait for me. Anyway, I didn’t want to be with them, I wanted to be with my dad, just the two of us going on all those promised big rides together. I stood there not knowing what to do, a seven-year-old rooted to the ground, too frightened to move, terrified of getting caught up in the crowds and lost.

My father hadn’t mentioned the name of the pub, and even if I’d been able to see the sign, I wouldn’t have been able to read it. What if Dad couldn’t find me? Or even forgot he’d brought me and left me stranded? I didn’t think I could find my way to the train station on my own, and I certainly wouldn’t know which train to catch or where to get off.

Waves of panic were beginning to engulf me, and I decided that the best thing to do was to get as close to the pub door I had seen Dad go in and to stay there until he came out.

My half-crown was burning a hole in my pocket, and I kept touching it to make sure I hadn’t lost it. I wanted to look at it but felt it best to keep it hidden in case some bigger lad tried to steal it from me. I so wanted to buy something for myself, but I didn’t want to lose sight of the pub door, and there were no shops close enough, so I could only wistfully look at the other kids walking past, wearing funny hats, eating sticks of rock and enjoying themselves as kids should on a special day out.

Time passed slowly. It was hot, I was thirsty and I needed to wee. I plucked up courage to nip around the back of the pub, but I had to hurry as I was terrified Dad would come out and find me gone.

The three other lads eventually came back, full of stories of the rides they’d been on. I wasn’t interested; I just wanted to get back home to my mum.

When he finally staggered out, it was easy to see that Dad had been drinking heavily. He had to hold on to me for support as we walked along. He had forgotten where the station was. I had to ask for directions. He fell asleep on the train, unaware of the seven-year-old next to him, and his drunken snores were an embarrassment. I remember wishing he was not my dad.

The Mirrored City by Michael J. Bode
Jason Priestley by Jason Priestley
The Butterfly Cabinet by Bernie McGill
Maui Madness (Zoe Donovan Mysteries Book 7) by Kathi Daley
A Bit of Rough by Felthouse, Lucy
Angry Management by Chris Crutcher
The Trigger by Tim Butcher
Doctor Who: The Masque of the Mandragora by Philip Hinchcliffe
Cordimancy by Hardman, Daniel
Blue Moon by Weaver, Pam
Our partner