Read A Prescription for Love Online

A Prescription for Love 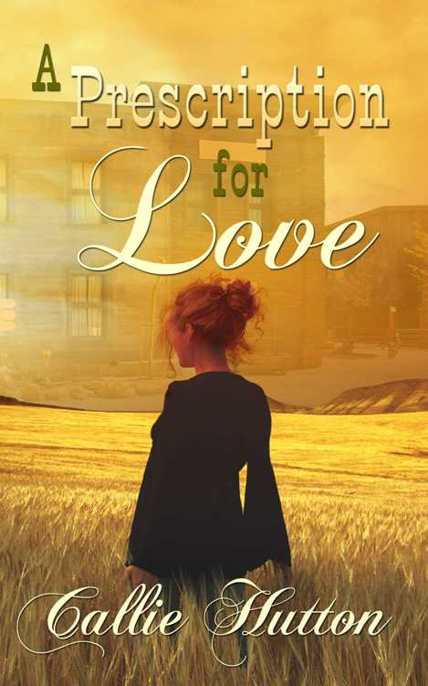 You are the only people in the world

who have my memories.

Thanks for being a part of my childhood.

A thanks to Susan Lewellen, teacher extraordinaire, for her entertaining story about Miss Lizzy’s Bordello in Guthrie, Oklahoma.

To Char Chaffin, friend and critique partner, for your insight, support, and help with A Prescription For Love.

Michael Henderson glanced up from where he stood behind the counter in The Guthrie Pharmacy.

“Young man, are you listening to me?”

His attention returned from the distraction of the doorbell to old Mrs. Benson, who visited at least once a week to complain about her numerous aches and pains. Again she insisted Michael fix up a prescription for her, even though he’d told her she should see the doctor first.

Before he could respond, a slight young woman came into his vision holding the ‘Help Wanted’ sign he’d placed in the window three days ago.

Mrs. Benson tapped the wooden floor with her cane. “I tell you that doctor don’t know from nothing about my aches and pains. Every time Peter brings me there, he says the same thing. Hot compresses and rest. How am I supposed to rest? Is he sending someone to my house to cook and clean?”

Michael patted the older woman’s hand. “All right, I have something to take care of your pain. It’s new, called aspirin. I’ll fix up a packet of the powder. Stir a pinch in a glass of water and drink the mixture down. The medicine should help you.”

She nodded and her frown eased. “That’s better. I knew I could count on you to help me out even if that good-for-nothing doctor can’t be bothered.”

Unfortunately for the citizens of Guthrie, Michael agreed. The new doctor who’d replaced old Dr. Carpenter when he’d retired seemed to be more interested in the young women in town than practicing medicine. Guthrie had its share of doctors, but many of the older patients found the trip to another part of town difficult. In this area they were stuck with young Dr. Kane.

“Now don’t use too much,” Michael warned as he handed Mrs. Benson the white envelope. “A little less than a teaspoon in water, every four hours or so.”

The older woman fumbled with her string purse, took out a nickel and placed the coin on the counter. “That enough?”

“That’s fine. Take care of yourself, and be mindful of ice patches on your way home.”

As she thumped her way to the door, he directed his attention on the young woman. A pretty little thing, but with the look of someone who’d been beaten down by life. As she proceeded toward him, he took in her mass of red curls struggling unsuccessfully to stay in the bun she’d fastened at the nape of her neck. Her startling blue eyes, shadowed by thick copper eyelashes, blinked rapidly, and she chewed on her lower lip. A long brown coat covered her from neck to toes.

“I see you’re holding my ‘Help Wanted’ sign. Are you applying for the job?”

“Yes. Can I ask what the job is?” The words came out breathless, and so soft Michael had to lean across the counter. Somehow the low-winded voice fit with the rest of her. Her hands shook where she clutched the sign. Overall, she appeared ready to take flight.

“I’m Michael Henderson, and it’s a pleasure to meet you.” He smiled, but she only nodded, her eyes wide, reminding him of a frightened animal.

“It’s closing time anyway, so suppose I flip the ‘Closed’ sign on the door and then we can talk without interruption?”

She licked her lips and stood back when he moved around the counter. He headed to the door, pulled down the shade, then adjusted the sign.

“I have an area in the rear of the store. Would you care to join me there?” He smiled again, but she merely nodded and followed him as he led her past counters of drugs and medical equipment. Michael pushed aside a curtain hanging between the store and combination storage and kitchen. “Please, have a seat.” He motioned to a table and two chairs next to the wall.

Miss Lester sat at the edge of the seat, clutching the ‘Help Wanted’ sign so tightly the paper crinkled. Michael reached across the table and took it from her hands. She blushed.

The poor woman appeared scared to death, and if she continued to chew on her lower lip, he’d have to return to the front of the store to get some salve for her.

“Would you care for some tea? I have a hot plate here, and I could heat some water.”

“Hot plate. I have electricity in the store. When I plug this in”—he picked up a round metal disk—“it heats up and I can warm things on it.”

“I guess you’ve never seen one?”

Miss Lester shook her head and licked her already dry lips. “No, thank you.” She blushed again. “To the tea.”

Michael settled into a chair, reached behind him, and retrieved a pad and pencil from a shelf. He wrote
Heidi Lester
at the top of the page. “Do you live in Guthrie?”

“Yes. I, um, rent a room in Mrs. Wilson’s house.” She took in a shuddering breath. “On Sixteenth Street.” Her voice squeaked and she cleared her throat.

“I know Mrs. Wilson. She’s a customer of mine. A very nice lady. Have you been there long?”

She shook her head. “Only three days.”

He sat back and played with the pencil as he studied her. “Where did you live before?”

“What sort of, um, job did you say it was?” She glanced at him briefly, then studied her lap.

He doodled on the top of the paper, contemplating Miss Heidi Lester who didn’t want him to know where she came from. He’d let his question go for now, see how the interview went.

“It’s a clerk’s job.” He rested his foot on his bent knee and crossed his arms. “I had a woman working for me, but her daughter moved from Guthrie to Dallas and Mrs. O’Reilly decided to move with her. She’d been with me since I opened the store, about eight years ago.”

Miss Lester nodded and wiped her palms on her lap.

Not very talkative.
How in heaven’s name would she be able to deal with customers?

“Anyway, the job involves waiting on customers, keeping the shelves stocked, dusting, counting money at the end of the day, and getting the bank deposit ready. Once in a while, if there are no customers, I may need some help in mixing prescriptions, but I would supervise any work you did.”

She nodded. Her pale face and pinched features reminded him of a cornered animal. If he weren’t so desperate to replace Mrs. O’Reilly he would probably thank Miss Lester for coming in, and immediately forget about her. She seemed achingly shy and nervous. Of course, applying for a job would unnerve anyone, but her behavior appeared to be something more.

However, in the three days since his clerk had left for Dallas, life in the store had been chaotic. Winter always brought more colds and chest complaints, which required medications mixed. He had young David Kemp making deliveries after school, but he desperately needed a second person in the store.

He’d also recently added a soda fountain, which had attracted school children wanting sodas mixed up, and candy from the penny jar. He found a great deal of satisfaction in his flourishing business, but couldn’t deal with it all alone.

“What type of work have you done in the past?”

That caught his attention. “So you dealt with customers?”

She hesitated. “No. I did sewing in the back of the shop.”

Michael tapped his pencil on the table and took a deep breath. “Miss Lester, I’m not sure this job would be suited to you . . .”

She leaned forward, twisting her purse into a mess, her voice trembling. “Oh please, Mr. Henderson, please. I really need a job, and in the three days I’ve been looking, I haven’t found anything except working at the Blue Belle Saloon, and I don’t want to do that.”

Anger shot through him. What in heaven’s name possessed Eric Connors to offer a saloon job to a skittish woman like Miss Lester? Certainly he wouldn’t expect her to entertain men upstairs in Miss Lizzy’s Bordello!

He leaned forward. “What I intended to say is, although I’m not sure about hiring you, I’m willing to allow you to try for a week to see how you work out. Would that be acceptable?”

She quickly sat up, her eyes bright. “Yes, yes. A trial period would be fine.” Her mouth broke into a huge grin and she wiped sweat off her upper lip.

What a transformation. Her smile changed an already pretty face into a beautiful one. The twinkle in her eyes and her full lips revealing straight white teeth sent his pulse racing. Something twisted in his middle he hadn’t allowed himself to feel in years.

He cleared his throat. “You understand you’ll have to speak with the customers?”

“Yes. That’s fine.” She hopped up so quickly she nearly upended her chair.

Michael grabbed it before it tumbled to the ground.

“I’ll be here first thing in the morning. Thank you so much.” She clasped his hand and almost shook it off his arm.

Michael led her to the front of the store, then unlocked the door and let her out. “See you tomorrow.”

“Yes, thank you very much. I’ll be here. Thank you again.” She backed away, then turned and walked into a light post.

“I’m fine.” She rubbed her forehead, adjusted her hat, and hurried away.

Heidi grinned and the giggle inside her erupted. She had a job! She had to stop herself from shouting, or skipping.

Perhaps she’d needed to tell a little lie to be hired. Since the job didn’t require her to sew, her dishonesty shouldn’t matter in the long run. The lie about the milliner shop had popped out of her mouth before she even thought about it. Mr. Henderson didn’t seem the type to hire a woman who’d never worked a day in her life.

Shield of Refuge by Carol Steward
Aloha Betrayed by Jessica Fletcher, Donald Bain
The Complaints by Ian Rankin
BirthDate (La Patron, the Alpha's Alpha) by Addae, Sydney
Rousseau's Dog by David Edmonds
When Somebody Loves You by Cindy Gerard
A Nice Fling is Hard to Find by Mlynowski, Sarah
A Moment in the Sun by John Sayles
Time Benders by Gary Paulsen
Dragon Haven by Robin Hobb
Our partner