Read A Presumption of Death Online

A Presumption of Death 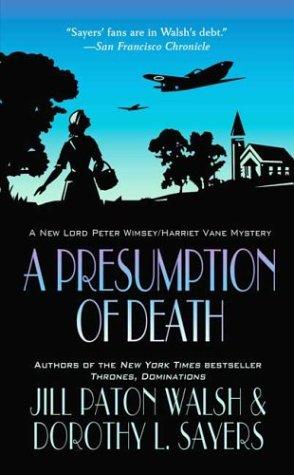 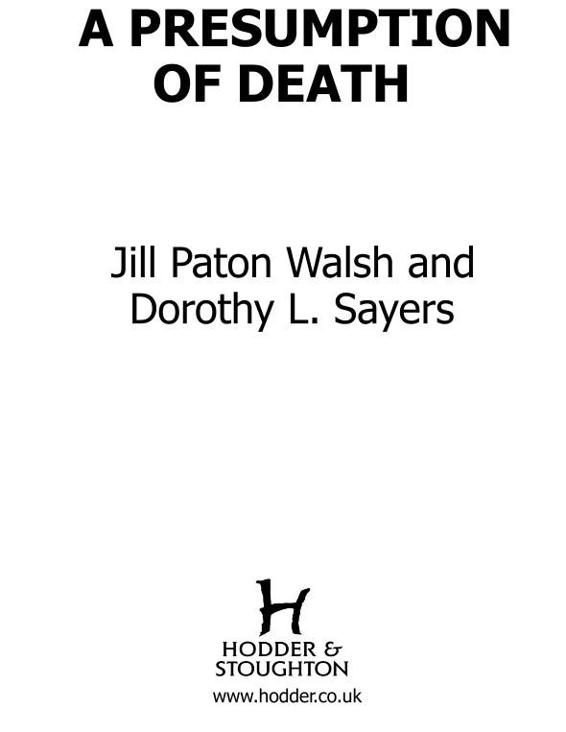 Copyright © 2002 by Jill Paton Walsh and The Trustees of Anthony Fleming, deceased
First published in Great Britain in 2002 by Hodder and Stoughton
An Hachette Livre UK Company
The right of Jill Paton Walsh and Dorothy L. Sayers to be identified as the Authors of the Work has been asserted in accordance with the Copyright, Designs and Patents Act 1988.
All rights reserved. No part of this publication may be reproduced, stored in a retrieval system, or transmitted, in any form or by any means without the prior written permission of the publisher, nor be otherwise circulated in any form of binding or cover other than that in which it is published and without a similar condition being imposed on the subsequent purchaser.
All characters in this publication are fictitious and any resemblance to real persons, living or dead, is purely coincidental.
A CIP catalogue record for this title is available from the British Library
Epub ISBN 978 1 848 94379 7
Book ISBN 978 0 340 82067 4
Hodder & Stoughton Ltd
An Hachette Livre UK Company
338 Euston Road
London NW1 3BH
www.hodder.co.uk
For Barbara, who remembers
Prologue

Honoria Lucasta, Dowager Duchess of Denver, to her American friend, Cornelia, wife of Lambert B. Vander-Huysen, of New York.

. . . I’ve been trying to write an article about war-aims and peace-aims, though I’m not at all sure that all this definition doesn’t end by darkening counsel, on the principle of ‘Mummy, I think I might understand if only you wouldn’t explain.’ We all know pretty well that something we value is threatened, but when we try to say what, we’re left with a bunch of big words like justice, freedom, honour, truth and so on, that embarrass us, because they’ve been misused so often they sound like platform claptrap. And then there’s ‘peace’. Peter, I’m terrified by this reiterated demand for ‘enduring peace and lasting settlement’ – it’s far too like the ‘war to end war’. Do we really still persuade ourselves that there’s some final disposition of things – territory, economic adjustment, political machinery – that will stabilise all human relationships by a stroke of the pen? That the story can end in the old-fashioned way with wedding-bells: ‘so they married and lived happy ever after’? If so, we need an Ibsen to deal with public life.
If one looks back at the last twenty years, one sees at how many points we might have prevented this war, if it hadn’t been for our inflexible will to peace. We said ‘Never again’, as though ‘never’ wasn’t the rashest word in the language. ‘River, of thy water will I never drink!’ We will never go to war again, we will revise all treaties in conference; we will never revise anything for fear of starting a war; we will never interfere in other people’s wars, we will always keep the peace: – we wooed peace as a valetudinarian woos health, by brooding over it till we became really ill. No wonder we couldn’t stand by the Covenant of the League, which set out to enforce peace by making every local injustice an occasion for total war. That idea was either too brutal or too heroic, I’m not sure which. A mistake, anyway. What I want to say is that there’s no hope of getting peace till we stop talking about it. But I don’t suppose that view will be very popular! As for going into a terrifying conflict under the leadership of Neville Chamberlain – hoping against hope that he will be better at war than he was at securing ‘peace in our time’ – everyone says he was trying his best, but his best might not be nearly good enough.

Futureland - Nine Stories of an Imminent World by Walter Mosley
Dark Chaos (# 4 in the Bregdan Chronicles Historical Fiction Romance Series) by Dye, Ginny
Brewer's Tale, The by Brooks, Karen
Trance by Meding, Kelly
Callahan's Secret by Spider Robinson
Bloodwitch by Amelia Atwater-Rhodes
Photo, Snap, Shot by Joanna Campbell Slan
12 Stake Out - My Sister the Vampire by Sienna Mercer
Zendikar: In the Teeth of Akoum by Robert B. Wintermute
Beautiful Mornin': The Broadway Musical in the 1940S by Ethan Mordden
Our partner