Read A Question of Honor Online

A Question of Honor 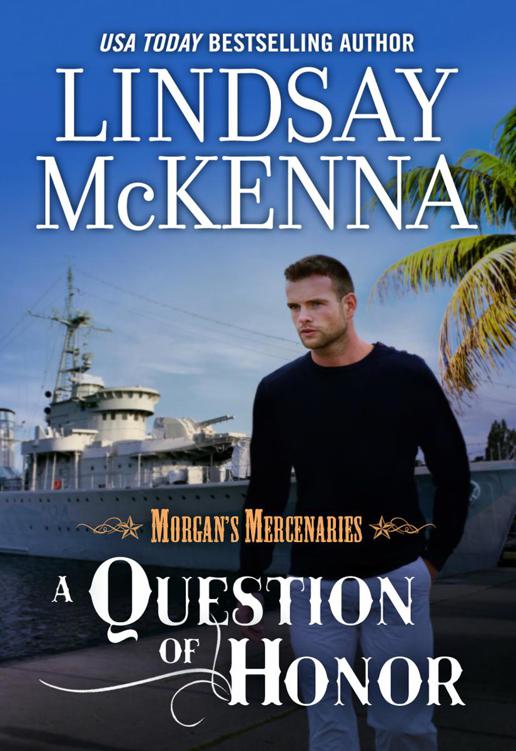 A Question of Honor

Orders were orders, but battle-weary undercover agent Kit Anderson chafed at seeking refuge from death threats in the house of her new boss, Coast Guard Lieutenant Noah Trayhern. Noah's cold authority masked inner demons to rival her own; his rough kindness sliced through her careful defenses. Suddenly her safe-house was under siege—from the inside!—and the danger was to Kit's heart…

Shadows from the Past

Heart of the Storm

Excerpt from
The Loner

“T
here’s no way you can talk me into taking this job, Chuck,” Kit said tightly.

“We’ll see, Detective Anderson,” her superior shot back. He pushed a sheaf of recently signed papers forward to emphasize his intention. Chuck Cordeman’s blue eyes caught and held Kit’s gaze as she stood tensely on the other side of the desk. “You wanted to get away from the scum of Dade County, sweetheart, and you got your wish. This new assignment is yours.” His gravelly voice softened slightly. “Narc division is a lousy place for anybody. And for a woman…” He shrugged his meaty shoulders, rounded by the weight of responsibility after fifteen years on the police force. “I sympathize with you, Kit, but this is the best I could come up with.” He nudged the documents closer to the edge of the desk.

Kit reached hesitantly for them. “What’s the assignment?” she asked tiredly.

Chuck’s face brightened, and he sat farther back in his well-worn chair. “Congratulations, Kit. You have just officially joined the Coast Guard as an adviser. You’re gonna act as liaison between their department and ours.” A small grin tugged at his mouth. “You’re gonna learn how they drug-bust at sea. I hope you don’t get seasick easily.”

Her eyes narrowed in disbelief. “The military?” she croaked as she slowly began to read the orders before her.

“You’re now officially part of the South Florida Task Force,” Chuck continued. “You’ll interface as a member of both the Drug Enforcement Agency and the Coast Guard.” He smiled slightly. “And you thought you were getting out of the excitement.”

Despair caused Kit’s already aching stomach to feel as if it were on fire. She ran her hand across it, trying to ease the pain. “I don’t want a lateral transfer, Chuck!” Her nostrils flared. “I want out of narc completely. I thought I’d made that clear.”

Chuck held up his hands in self-defense. “Listen, Kit, I tried. Honest I did. But—”

“The captain said you were too damned good to lose. Let’s face it, you’ve been one of our best undercover agents. You’ve survived when others haven’t. You’re bright and young—not to mention that you’re part of a police family. The captain sees you going places with the department.”

“Over my dead body!”

“Easy, Kit. I know how you feel. Everybody in narc gets a gutful at some point.” His voice became soothing. “Look, the captain likes your work. You’ve busted your tail and made some damned fine collars. Now you’re getting this cushy assignment to take the pressure off you. Believe me, Kit,
everybody
has been bidding for this job. Hell, I’d rather chase smuggling dope boats into our country than get shot at every few days by some junkie in Dade.” His eyes glittered. “Wouldn’t you?”

Kit clamped down on her rising anger.
Turn it inside,
she told herself.
Don’t show any emotion.
Wasn’t that what she’d learned from five years of living in the trenches as a narcotics agent? Show any emotion and you were on a morgue slab faster than you could snap your fingers. Her stomach burned as her ulcer acted up again. But Kit had more immediate concerns. She eyed her boss.

“Chuck, I told you—I want out. Out of narc. Out as an undercover agent. I can’t take it anymore.”

Chuck shook his head. “Everybody here develops either stomach ulcers or permanent migraines—or both. It comes with the territory. I’m tellin’ you, Kit, one more year in narc and Cap will promote you to that desk job you’ve been wanting. Just hang in there.”

Kit sighed. Maybe he was right. Her father would be disappointed if she quit an assignment. Hadn’t she and her three brothers all followed his footsteps into police work? Family tradition came first, her Irish father had gravely told her the day she’d been accepted to the Florida Police Academy.

Focusing her attention back on Chuck, Kit couldn’t muster any anger toward him. He was a rumpled, solidly built man with a weathered face. That face had seen a lot of action, she reflected. Beneath that lined flesh were hidden scars born of ten years in the narc trenches. Somehow he still belonged there, even though he’d been allowed to move up the ladder to the safety of a desk job.

She cared for this man. He would never say, “Kit, I know you’re hurting. I know you’re tired. And I’m worried about all the weight you’re losing.” Chuck only knew how to be supportive by being gruff. But she knew he cared for her. Kit sighed.

“It’s a one-year assignment, Chuck? Are you sure?”

“Yeah, just one. You were chosen because you’re the only one who can identify Garcia, the Colombian kingpin, on sight. Word’s out that he’s going to be making a big drop either here, the Bahamas or Puerto Rico. We want him, Kit. Real bad. And so do you. All you have to do is cruise around on this cutter and check out every druggie they bust.” He managed a sliver of a smile. “You’ll get one hell of a nice tan. Most of their work is done during daylight. Hell, you’ll be able to live like a normal human being, sleeping nights and working days instead of the other way around.”

A corner of her mouth quirked. “So Garcia is finally going to make his move.”

“Yep, and you can collar the bastard for us.”

“Yeah…maybe.” Tiredly Kit ran her fingers through her short black hair. Her voice trailed off into a quavering whisper. “Maybe…”

Chuck produced a severe frown. “All right, get your rear over to CG Headquarters at the Port of Miami. There’s a Lieutenant Noah Trayhern who’s expecting you.”

The name sounded familiar, Kit mused. “Right now?” she asked, turning her attention back to Chuck.

Chuck consulted the watch on his thick wrist. “It’s 10:00 a.m. Go clean out your locker. Lieutenant Trayhern requested you meet him at noon.”

Kit shook her head morosely. She was twenty-eight going on eighty and feeling every minute of it. Releasing a long breath, she waved the papers that still needed to be signed at Chuck.

“Okay. Or should I practice saying aye, aye, sir?”

A genuine smile crossed her lips. “You’re in my heart forever, Chuck. You know that.”

“Ha! The man who gets your heart is going to be a lucky guy.”

Kit grimaced, slowly pulling the leather strap of her purse across her slumped shoulder. “The only men interested in me are pimps who’d like to see me out on the street working for them when I’m undercover as a hooker. No thanks.”

As she made her way down the noisy, crowded hall toward the locker rooms in the basement, Kit felt as if one heavy stone had been lifted off her and another put in its place. The narc division was filled with police officers who had learned to be actors and actresses. They could play the part of dope peddler, junkie or pimp to infiltrate organized crime in Dade County. Kit herself had become an actress for much larger stakes: she had posed as a rich Colombian landowner’s daughter interested in connecting with the top of the drug hierarchy in southern Florida. She had been perfect for the part with her black hair, flawless Spanish and deep tan. She had lied and said her mother was American to explain her gray eyes. And because of her bravado, skill and courage, she had been able to infiltrate Jose Garcia’s drug empire in Colombia. The information she’d gathered had dealt Garcia an almost lethal blow to his million dollar business. And the damage she’d caused them had cost the Mob stateside even more in drug sales. Yes, she had fooled them all and managed, thus far, to stay alive.

Kit found little in her locker worth retrieving. As she emptied the last of its contents, she dug out the address of the CG station.
Lieutenant Noah Trayhern,
she repeated to herself. Where had she heard that name before?

“I hope you don’t have any bones to pick with me, Lieutenant Trayhern,” she whispered softly, “because I’m down and out.”

Something prompted Noah Trayhern to raise his head. The cubicle that served as his office sat opposite the entrance, and he looked up and saw a tall young woman standing just inside the main doors of the Coast Guard station. There was a decided air of loneliness around her that seemed to wear like a coat of armor, he thought, his green eyes narrowing in inspection. And her ill-fitting beige blazer over a plain white blouse and blue jeans indicated some carelessness about appearance.

Noah’s gaze moved to her face, seeking a redeeming quality to counteract her initial image. Her eyes were large and expressive but held no life. They were slate gray and weary looking, with dark telltale shadows beneath them. Her finely sculpted chin held tension, warning him that although she might appear vulnerable, she had a stubborn streak. She was also underweight for her height, Noah observed, her cheeks hollow beneath her high cheekbones. Now his gaze was drawn to her mouth. She had beautifully formed lips that, despite her tension, pulled upward. That was good. It was her saving grace, Noah decided.

She was on guard, her feet planted slightly apart—a fighter’s stance that Noah recognized. He, too, knew the value of keeping balance in devastating situations.

Kit noted the Coast Guard officer’s appraisal and bridled inwardly as his impassive green eyes roved the length of her. But she coolly did a similar stocktaking of this tall, obviously athletic man. There was something about him that suggested calm, she decided. In fact, as she looked around, Kit began to register that the difference between the military headquarters and the police station was shocking. The noise level here was almost nonexistent. People working at nearby desks were actually smiling and joking with one another. And the smell was antiseptic clean, with a touch of ocean breeze to make it worth inhaling deeply.

“You’re looking for someone,” the officer said from the desk where he sat. “May I help you?”

Kit regarded him with growing interest. This man’s well-modulated voice would soothe even the most violent junkie. Her stomach slowly began to unknot. And his sea-green eyes revealed a keen vitality with undeniable sparks of intelligence. Humor lurked at the corners of his well-shaped mouth—a mouth that looked accustomed to giving orders and having them carried out. Kit swallowed dryly, unable to break eye contact.

She moved closer to the desk. “I’m Detective Kit Anderson. I was told to be here by noon to meet a Lieutenant Trayhern.”