Read A Room to Die In Online

A Room to Die In 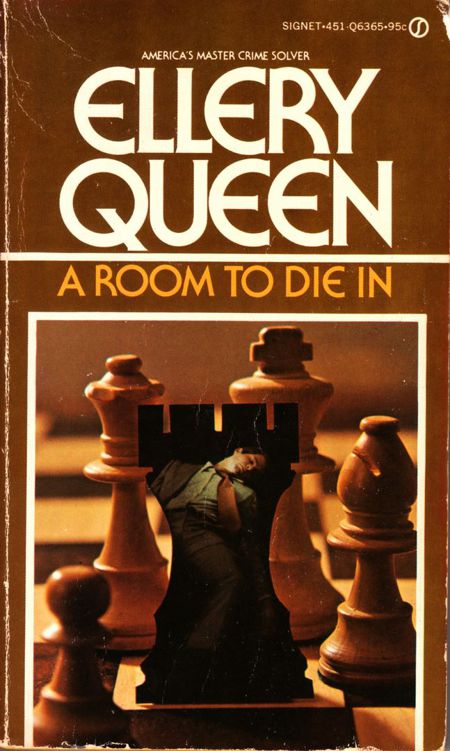 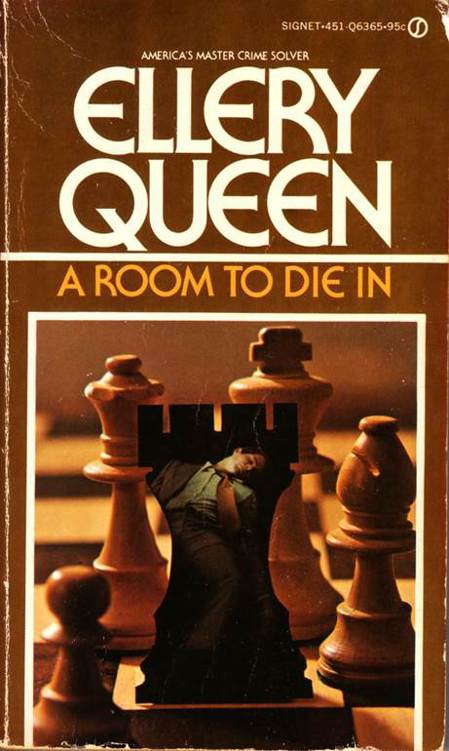 THE SHADOW OF DEATH—

From the direction of the bathroom came a
peculiar bumping, scraping sound. “Harvey?” Ann called.

The bumping, scraping sound diminished.
There was silence. “Harvey?” asked Ann again in an uncertain voice. She peered
across the dark bedroom at the line of light under the bathroom door.

The light snapped off. The door opened,
very slowly. In the darkness loomed a shape darker than dark. Ann’s knees
wobbled; she gasped, whirled, and ran for the front door. Behind her pounded
footsteps.
She clawed
for
the door handle
and
ran
screaming out the door into the hall with death at her heels. . . .

A
ROOM TO DIE
IN

Published by arrangement with Manfred B.
Lee and Frederic Dannay

are published by The New American
Library, Inc.,

Arriving home
one afternoon early in March, she noticed a large, rather shabby Buick parked
at the curb. In the driver’s seat sat her mother. Ann’s first impulse was to
drive quickly on, but Elaine had seen her and was purposefully jabbing out her
cigarette.

Ann pulled into
the parking area. Elaine got out, gave her girdle a tug, and marched briskly
toward her. She was a short, not unattractive woman of forty-three—eighteen
years older than Ann—plump as a robin, with a swaggering air of self-reliance.
Her hair, tinted an impossible auburn-bronze, was teased into hundreds of tight
curls. She wore a blue silk suit with large white buttons, a frivolous white hat,
and spike-heeled blue pumps.

Ann was taller,
with casual brown hair. By contrast, she looked cool and uncomplicated.

They greeted
each other with perfunctory pecks; then
Ann
led the way upstairs.
Elaine talked continuously. “. . . Say what you like about Frisco—sooner I get
back south the better. My teeth haven’t stopped chattering since I got here,
the damn fog
and
cold
and
wind . . . Last
winter I was in Florida; that’s God’s country. I had the most
marvelous
house trailer, but I had to sell it.
Wouldn’t you know! . . .”

She stood in the
middle of Ann’s living room and assessed every object in sight with a panoramic
glance.

Elaine perched
on the edge of a chair. “With a job like yours,” she said gaily, “I’m surprised
you keep liquor in the house.”

Ann smiled
grimly at the ancient taunt. “Scotch or bourbon?”

Elaine wasn’t
sure. Ann showed her the bottles, which she had picked out of a bin at the
supermarket. Elaine read the labels and winced. “I’ll stick to the Scotch; it’s
safer.”

“I’m not all
that particular,” said Ann.

“Don’t get me
wrong,” protested Elaine. “I know as well as the next one that a schoolteacher’s
salary doesn’t extend to Jack Daniel.”

“I make out well
enough.”

“I envy you your
fortitude. I’d go stark raving mad the first day. The first
hour.”

Ann’s smile was
becoming brittle. “It’s not all that bad. Second-graders are pretty amenable.”

“On the rocks
with a squeeze of lemon. Or bitters, if you have any.”

Ann brought ice
from the refrigerator. Elaine jumped to the window and looked out into the
street. Then she walked over to the counter that separated living room from
kitchen and eased herself up on a stool. With quizzical eyes she watched Ann
squeeze lemon juice into her glass. “I thought sure I’d find you married. At
least going through the motions.”

Ann made no comment.
She handed Elaine a glass and poured soda into her own. Elaine drank, ruminated
a moment, then turned wry eyes on Ann. “My feelings are hurt. It’s been
three years
since I’ve seen you. And you don’t
even say you’re glad to see me!”

“It’s certainly been
a long time,” said Ann. “What have you been doing?”

“Oh . . . taking
care of myself. I get the most dismal streaking headaches. Honestly, nothing
seems to help. I’ve spent hundreds of dollars on every kind of treatment
imaginable. I’ve been to three of the best doctors in Los Angeles. They look
wise, give me some pills, and send a big bill. But night after night it’s the
same old story—as if somebody hit me with a hammer. Right here.” Elaine rubbed
her temples.

“Will you have
more Scotch?” asked Ann.

Elaine shook her
head. “I think not.” She primly pushed her glass aside. “I suppose you never
see Larry?”

Larry was Ann’s
ex-husband, an oboist of some reputation. “I think he’s in Cleveland, playing
with the Symphony.”

Elaine screwed
up her face. “The awful sounds that man used to make!”

Ann gave a
noncommittal shrug. It was her conviction that Elaine, motivated partly by
dislike for Larry, partly by sheer deviltry, had broken up the marriage. Ann
could now recall the situation with dispassion, even a kind of humor. Larry had
displayed a ridiculous tendency toward breast-beating; she probably had lost
very little. Still, at the time . . .

Elaine absently
reached for her glass. Finding it empty she twitched her mouth in a
moue
of surprise. Ann politely poured more
Scotch. “I suppose you’re still married to what’s-his-name . . . Gluck?”

“I see Harvey
off and on,” Elaine acknowledged. “He wants me to move back to Glendale, but”—she
gave her head a sage shake—“uh-uh. I’ve had it with Harvey, unless he gives up
those vile kennels.” She sipped the Scotch. “Do you ever see your father?”

Years of
practice had schooled Ann in the most subtle shadings of Elaine’s voice. She
asked, “What do you want with him?”

“You haven’t
seen Roland, then?”

“About a year
ago I had dinner with him and his wife. Then, let’s see—in August?—July or
August I happened to be in Sausalito and I ran into him on the waterfront. He
and Pearl were separated, and Roland was living out in the country. I don’t
know what he’s doing now.”

“You lack all sense
of duty toward either Daddy
or
Mommy,” declared Elaine.

Ann laughed
grimly. “I certainly lack something. If it hadn’t been for Grandmother, I’d
have lacked a lot more.”

Elaine sniffed. “Well,
it’s not kind to say so, but you must know you were an accident. Heavens, I was
just a kid. And after your father and I separated . . . well, I had my career
to think of.”

Elaine rose,
smoothing the blue suit over her torso. Years ago, at Santa Monica High, she
had been a cute redhead, full of mischief, ginger, and zip. She had been
cheerleader, jitterbug champion, general hell-raiser. How and why she had ever
cast her lot with Roland Nelson—scrounger, iconoclast, bum, and sometime chess
player—was a mystery Ann had never resolved.

Elaine had
decided to sulk. “I must say I expected you to show a little more
warmth.
You’ve got every bit of your father’s
egotism. Here I’ve come all the way north, groped my way through this miserable
city . . .”

Ann could think
of nothing to say. Above all, she must be careful to avoid the slightest
proffer of hospitality. Elaine was deft at converting a halfhearted “look in on
us sometime” to three weeks in the master bedroom.

“Well,” snapped
Elaine, “what is your father’s address? I want to talk to him.”

“Why?” Ann was
surprised enough to ask.

Elaine smiled. “If
the truth be known, dear Bobo has come into money, and I want what he owes me—
which is plenty.”

“How in the
world would Daddy come into money?” Ann asked, bewildered.

“Haven’t you
heard? His wife died.”

“Yep. What was
her name . . . Pearl? Anyway, they were never divorced, and he inherited. As
easy as that.”

“I’m sorry,”
said Ann. “I liked her.” She gave Elaine a puzzled look. “Where did you learn
all this?”

Elaine laughed
brightly. “Don’t you worry; I keep my ear to the ground. You
do
have his address?”

“When I spoke to
him he was living in Inisfail. No telephone. He’d become a hermit of sorts.”

“Where in the
world is Inisfail?”

“Cross the
Golden Gate Bridge, keep on the freeway into San Rafael. Then ask or check a
map, because it’s off the main highway. Toward the ocean. The address is five
sixty Neville Road.”

Elaine noted it
on the back of an envelope. Ann watched her write. “You’re just wasting your
time.”

“Roland won’t be
anxious to share his wealth with you. Or me. Or anyone.”

Elaine pursed
her lips in a thoughtful smile. “I think he will. In fact, I
know
he will. Or I’ll make his life so utterly
unbearable—”

“We’ll see.”
Elaine drained her glass. A moment later she left. Ann watched from the window
as her mother crossed the sidewalk and got into her car. She looked up before
she shut the door, flipping her hand in jaunty farewell. The engine started
with a burst of blue exhaust.

The car lurched
off, around the corner, and out of sight, and Ann was left in a mood of dark
depression.