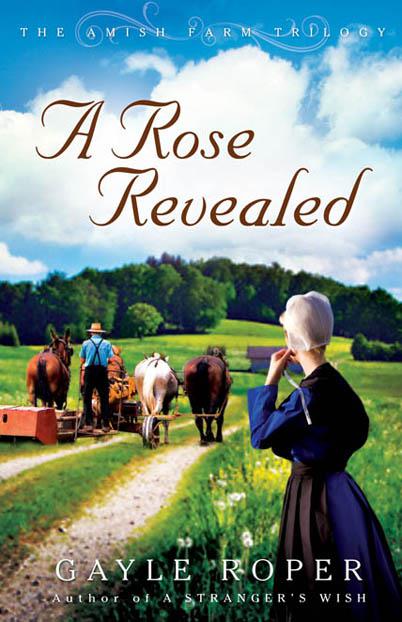 Previously published as
The Decision
.

Be sure and read the other two Gayle Roper books in the Amish Farm Trilogy.…

T
he force of the blast knocked me to the ground.

I fell into Sophie Hostetter’s beautiful red impatiens lining the front walk, breaking off the brittle stems with my legs, torso, even my head. It no longer mattered whether or not the predicted frost struck tonight. The plants were decimated, a fact I grasped much more readily and with more distress than the event that had tossed me willy-nilly into them and had ground expensive licorice bark mulch into my palms and forehead.

Being thrown to the ground by forces too strong to counter was beyond my experience. When the displaced air pushed ahead by the expanding gases of the explosion hit me in the back and sent me sprawling, when the heat of the resulting fire scorched me through my sweater and turtleneck, I couldn’t comprehend it.

Exploding cars and searing heat were beyond my ken.

Instinctively I raised my hands over my head and pulled my knees to my chest, belatedly protecting myself. I tried to think, to break through the gray fog of shock. After all, I was a nurse and an EMT. I was used to catastrophe. But I usually dealt with the aftermath of other people’s pain, not participated in it. I was the one who bound up the wounded, not the one who lay flattened, deafened, and blank-minded.

I stared at the shattered impatiens and reached out tentatively as if I thought I could repair them. A bruised and bereft crimson flower sat softly on the back of my right hand. I studied it with the intensity of a philosopher seeking the secrets of the universe in the fragile red petal. Unfortunately, even if I’d discovered some deep truth, I was too fuzzy to comprehend it. My head ached from its encounter with
terra firma
, and my ears rang from the concussive roar that had filled the air. Even my vision was fuzzy, but I instinctively knew that was because my glasses had fallen off.

Somewhere in the deep recesses of my mind, the part that always responds to personal trauma with denial and trivia, I was thankful that I was wearing my uniform as a home health nurse, navy slacks and cardigan. They wouldn’t show the dirt. Then I realized I was lying with my blue and white turtleneck nearly buried in soil, mulch, and bleeding flowers.

I sighed and tried to remember if I had any clean uniforms left. If I didn’t, did I have any bleach alternative detergent? Or had I used it all up last week? I fretted over the issue like it really mattered and berated myself when I couldn’t recall.

I sighed again, and slowly my mind began to function rationally. The laundry receded, the least of my problems, and reality hit with the impact of the explosion itself.

I uncurled and pushed myself to my knees. I retrieved my glasses from the mulch and blew them clear. The great roaring continued to fill the air as I forced myself to look at the fire, not a cozy, inviting fire like in a living room hearth, but a conflagration, a pulsing sea of flames, writhing, consuming what had been Ammon Hostetter’s car.

And Sophie Hostetter, his mother and my patient. Sweet Sophie who had suffered so long and so devastatingly. Who had been going on her first outing after several debilitating weeks of chemotherapy. Who had been so excited to finally breathe outside air and watch the bittersweet bloom in the hedgerows and corn stalks get collected for silage by silent, industrious Amishmen pulling John Deere harvesters behind their horses.

Sophie, who had struggled so to live.

Oh God
, I prayed in horror and distress.
Oh God!
My mind could form no other words. My eyes shut to block out the devastation of the fire. The Town Car was totally engulfed.

I steeled myself and staggered to my feet. I moved toward the fire even as I pulled my cell phone from my waist clip, but the intensity of the flames made a close approach impossible.

I circled the car at an awkward run, hand held before my face to protect my eyes from the staggering heat. I hit 911.

I tried to find someplace the fire wasn’t totally overwhelming, someplace I could get near the vehicle, some way I could offer help.

Smoke ascended, twisting and wrapping in on itself like some mythical monster. The flames undulated, arms raised skyward, awful in their red, orange, and white-hot glory. The air was acrid with burning, not the warm, autumnal scent of blazing leaves but the raw odor of hot metal and burning tires.

My heart fought the realization that there was no life-saving care I could give here. Finally, sobbing, I stumbled toward the house.

I’d almost reached the front door of the Hostetters’ great home on the golf course when a second explosion rocked the early November afternoon and knocked me down again. This time it wasn’t brittle impatiens that took the brunt of my fall but my forehead as I struck it against the first riser of the shallow cement front steps.

Pain lanced across my skull and along my neck and flashed down my spine. Groaning, I rolled on my side and reached up a shaking hand. I found broken skin and blood. A swelling had already developed, but I felt no pain. Shock, I diagnosed.

I turned back to the blaze, pulsing with renewed life, and saw with horror that pools of fiery gasoline were spreading from beneath the car, rivers of flame racing across the drive.

“My car!” I ran raggedly to the white sedan with Lancaster Home Health Group stenciled on the side along with the agency logo of a blue cross within the outline of a house. I threw the door open, wrenched the keys from my slacks pocket, quickly started the car, and hit the gas. I drove out onto Route 23 and parked the car as close to the property’s privacy hedge as I could. I didn’t think the fire would get this far.

I rested my aching head on the steering wheel for a minute to ward off vertigo. My eyes were watering from the smoke and my ears still rang. Even here on the far side of the hedge the air reeked with the odor of burning gasoline and crackled with the sound of the fire.

I grabbed my phone from the passenger seat where I’d tossed it and called my office to tell them I wouldn’t be able to make my last two calls. Madylyn, our whiney office manager, was not pleased.

“Deal with it, Madylyn,” I snapped, and then slammed the phone shut. I wasn’t up to cajoling or peacemaking right now.

I slid from the car and crept back around the hedge to see whether the fire was still raging wildly. It was. I looked with a strong sense of unreality at the scene and beyond to the house.

And I froze at what I saw through the pulsing waves of heat and smoke.

Standing at the front door of the mansion, mouth agape, shock in his eyes, was Peter Hostetter watching the conflagration.

“Oh, no!
Oh, God!
” I prayed, unable to voice my thoughts. Tears of sympathy wet my face and a vise gripped my stomach, tightening, tightening until I felt I might implode from the pressure. His mother and his older brother!

I skirted the site of the accident and raced up the front steps even as a police car pulled into the drive, only to back out again when the officer saw the spreading gasoline-fueled flames.

“Peter!” I laid a hand gently on his arm as I shouted to be heard above the roar of the fire. “Let’s wait inside. Help’s on the way.”

He didn’t hear me. He didn’t even see me.

I grabbed him and shook. “Peter!”

He looked at me without recognition, confusion struggling with the vagueness in his eyes.

“Peter! It’s me, Rose! Come inside while we wait for help!” Not that help would be able to do anything.

His eyes slid from me to the car.

“Ammon.” His voice was barely audible through the ringing in my head. “Mother.”

I swallowed against my tears. “I know.” I leaned against him, trying to move him into the house, away from the terrible inferno. He held his place against me for a short minute, and then sagged suddenly against the jamb. When I felt his body give, I pushed as hard as I could. We went flying into the vast entry hall, knocking against the pair of antique balloon-back chairs Sophie had found just before her devastating bout with cancer.

We struggled to stay upright, grabbing the curved backs of the chairs for stability.

“Sit here,” I ordered when my head stopped spinning. I pressed down on his shoulders, and he folded, collapsing on a petit point seat, disoriented and sweaty, gray. His breathing was shallow and his pupils were great black circles as he stared out the open front door. I rushed to close it, blocking his view.