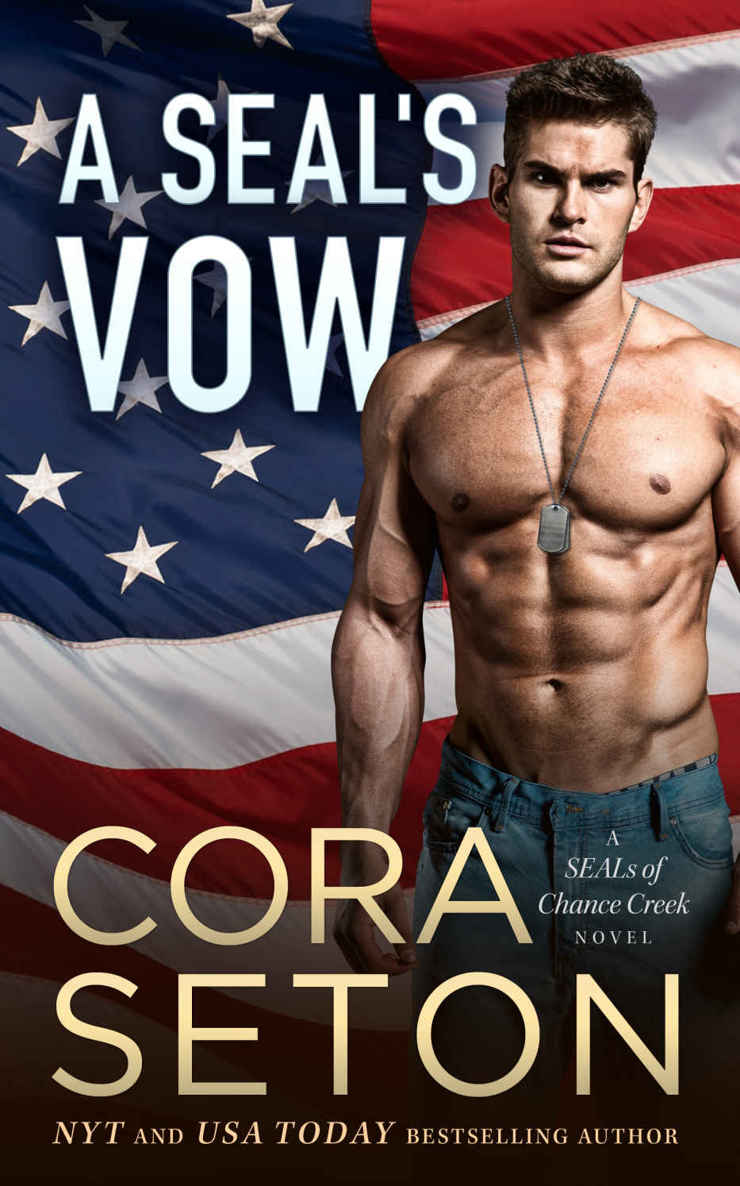 Published by One Acre Press

A SEAL’s Vow is the second volume in the SEALs of Chance Creek series, set in the fictional town of Chance Creek, Montana. To find out more about Boone, Clay, Jericho and Walker, look for the rest of the books in the series, including:

The Cowboys of Chance Creek Series:

The Cowboy Inherits a Bride (Volume 0)

The Cowboy Wins a Bride (Volume 2)

The Cowboy Imports a Bride (Volume 3)

The Cowgirl Ropes a Billionaire (Volume 4)

The Sheriff Catches a Bride (Volume 5)

The Cowboy Lassos a Bride (Volume 6)

The Cowboy Rescues a Bride (Volume 7)

The Cowboy Earns a Bride (Volume 8)

The Heroes of Chance Creek Series:

C
lay Pickett snapped
awake with an alertness born of long years of active duty as a Navy SEAL. But he wasn’t in the hills of Afghanistan, the deserts of Iraq or any of the other exotic locales he’d visited during his years of service. He was thirty feet from the bunkhouse at Westfield, a large, once-prosperous ranch in Chance Creek, Montana, where he’d come with several of his oldest friends to build a sustainable community and show the world a better way to live.

There shouldn’t be any danger here, but Clay was as alert as if he’d been sleeping in a minefield. You never knew where trouble would spring from. He found it best to expect the worst and be pleasantly surprised when disaster didn’t strike. Holding his breath, he listened for the noise that had jolted him out of his dreams, but all he heard was the normal early morning sounds in Base Camp—the assortment of tents and outbuildings that formed the headquarters of the community for now. Someone was snoring. Someone else rolled over and settled back into sleep.

Clay quickly pulled on boxer briefs, a pair of sweatpants, socks, shoes and a T-shirt, and eased the zipper of his tent open. As he stepped out into the cool pre-dawn air, the familiar scents of the countryside made him inhale deeply.

He was back where he belonged. Where there was good work to be done and a future for him. As he scanned the quiet tents, the nearby fire pit, bunkhouse and barns, and the farther off pastures that rolled down to the distant mountains, Clay relaxed.

There was nothing out of order that he could see. Just his destiny spread out before him. Life was good. Real good.

Something snapped in a row of bushes lining the dirt lane that ran from the bunkhouse out to the highway. Clay, alert again, moved quickly to investigate, and laughed when a wren darted out of the foliage and flew so close by his head he heard the whirr of its wings. There was nothing to fear here in Chance Creek.

Clay tried to ignore that thought, but it wound its way into his mind with the tenacity of a serpent entering paradise. He and his friends had a number of tough challenges ahead of them, but only one of them gave him pause.

He needed a wife.

Clay turned around to face the large, three-story stone house perched on a rise of ground a quarter mile away. Nicknamed the manor for its grandiose style, it had sheltered Westfield’s owners for over a hundred years. Now it housed Nora Ridgeway and her friends, who’d come to Chance Creek on a mission of their own. They’d left their jobs, apartments and city life behind to come to Westfield, and had promised each other they’d spend six months devoting themselves to the artistic endeavors they had studied back in college. In order to stretch their budget, they’d sold most of their possessions. Like the men of Base Camp, they practiced a frugal way of life, but where Clay and his friends relied on the latest technology to make their community sustainable, the women had gone in an entirely different direction. Instead of focusing on the future, they had turned to the past.

“A Jane Austen life is a beautiful life,” Nora had explained to him in the early days of their acquaintance, back when he’d thought she was falling for him as fast as he was falling for her. “By living the way her characters did—without modern distractions—we have more time for our art, music and writing. When we wear Regency clothing, it’s a constant reminder of our goals—and, as Avery puts it, we’re less likely to go gallivanting into town all the time. People stare.”

Clay had quickly grown to like those Regency dresses. They set off Nora’s figure in a wonderful way. In fact, he had to concentrate when she was around not to let his gaze drop too often—and linger too long—on her cleavage. Whatever she wore underneath those clothes did wonderful things to lift and plump up her breasts. More than that, Nora in one of those old-fashioned gowns revved him up in some primal way he couldn’t quite put into words. Her looking so womanly made him feel like a man. He’d never say that out loud, but it was true.

The simple, peaceful rhythm of the women’s days appealed to Clay, too. He thought the two groups had goals that weren’t mutually exclusive, but that didn’t mean all went smoothly between them.

Clay missed the days when talking to Nora was simple. They’d ended as soon as the women had heard about the reality TV show being filmed about Base Camp. Once Nora knew the rules Clay had to live by, she’d backed off fast and Clay had promised not to pursue her. That had been a big mistake, one Clay regretted the moment he’d made it.

Still, who could blame her? He knew what had scared her off. It wasn’t that the homes they built had to consume less than ten percent of the energy normal houses used. It wasn’t that their energy grid had to run exclusively on renewable resources. It wasn’t that they needed to create a closed-loop gardening system and grow all the food they’d need to last through the winter.

It was that their financial backer—eccentric billionaire Martin Fulsom—had dictated all ten men living in Base Camp had to marry within six months, and three of their wives had to be pregnant with the next generation, or they’d lose the ranch.

Nora refused point blank to consider marrying anyone in such a short period of time. Clay had tried to be a gentleman. He’d tried to back off. But it hadn’t worked. He couldn’t cure himself of the desire to make Nora his wife.

Somehow he had to convince Nora he was the man for her—despite her reservations. He didn’t know how. Didn’t know if she could be convinced.

But he sure as hell was going to try.

Someone was watching
her.

Nora came fully awake and sat up in bed, listening to the silence. She’d been on edge for months now, ever since she’d started getting disturbing phone messages from one of her students. But she’d left all that behind her when she’d come to Chance Creek. No one outside her family and a couple of friends had her address or new phone number. She hadn’t heard a word from her stalker in the two months since she’d arrived.

Dust motes danced in a beam of early morning light that pierced through the curtains of her third-story bedroom. The old-fashioned furnishings and pretty curtains were the same as ever. Nora loved this room, but something had woken her. A sound.

She turned to the door but it was shut as tight as always when she went to bed. She didn’t lock herself in at night—she was paranoid about fires in this large, old house, and mindful of the two-story drop outside her window should she ever have to escape one. Had one of her friends opened the door, looked inside to see if she was awake, then shut it again?

If anyone was awake this early it would be her. It was only two days to Riley’s wedding, and Nora knew her friend was nervous about it. She slid out of bed, threw her robe around her and went to the door. She opened it carefully, looked out into the empty hall and padded over to the staircase. “Riley?” she called softly again.

She must have been imagining things. Or maybe the house had settled. This old pile of stone did that a lot.

Nora returned to her room, but although the bed looked warm and comfortable, the quiet countryside she could see through her windows beckoned to her. She seldom got time alone these days, and if she hurried, she could get a little writing in before breakfast and morning chores. She’d head down to Pittance Creek, bring her notebook and a pen. Maybe the setting would inspire her and she’d finally make some headway.

She moved to the window, surveyed the cluster of tents down by the bunkhouse and picked out Clay’s. There was nothing to distinguish it from the others, but she knew exactly where it was. She’d seen the handsome SEAL enter and exit it a hundred times.

She couldn’t seem to stop.

Clay Pickett. Strong. Rugged. Six feet plus of muscles, piercing eyes and a smile that did things to her insides. A coil of energy waiting to spring most of the time. She’d met him the day he’d flown into Chance Creek. The day she’d been trying to fly out of it, trying to run back to Baltimore, back to her old life. She’d changed her mind almost the second Riley’s fiancé, Boone Rudman, had spotted her, crossed the terminal to intercept her and introduced her to Clay. She was sure Clay had felt something, too. He’d taken her hand, caught her gaze and the next thing she knew she was headed back to Westfield. She’d never admitted it to any of her friends, but on that very first day, right there in the airport, she’d seen Clay decide she was the one. She’d read it in his eyes. The answering heat that had rushed through her when he held her hand had almost convinced her he was right. That was her weakness: the way Clay touched her. Carefully. Confidently. She melted every time. Two strangers shouldn’t know they were meant for each other.

The Disappeared by Harper, C.J.
Adventures of the Starship Satori 4: No Plan Survives Contact by Kevin McLaughlin
Imperial Spy by Mark Robson
Dirty Kiss by Rhys Ford
My Tattered Bonds by Courtney Cole
The Lightkeeper's Daughter by Iain Lawrence
Letter From Home by Carolyn Hart
The Bones by Seth Greenland
Seducing the Enemy's Daughter by Jules Bennett
The Alpha's Search (The Craven Trilogy, #1) by Natalie Shaw
Our partner