A Season in Gemini, Intro 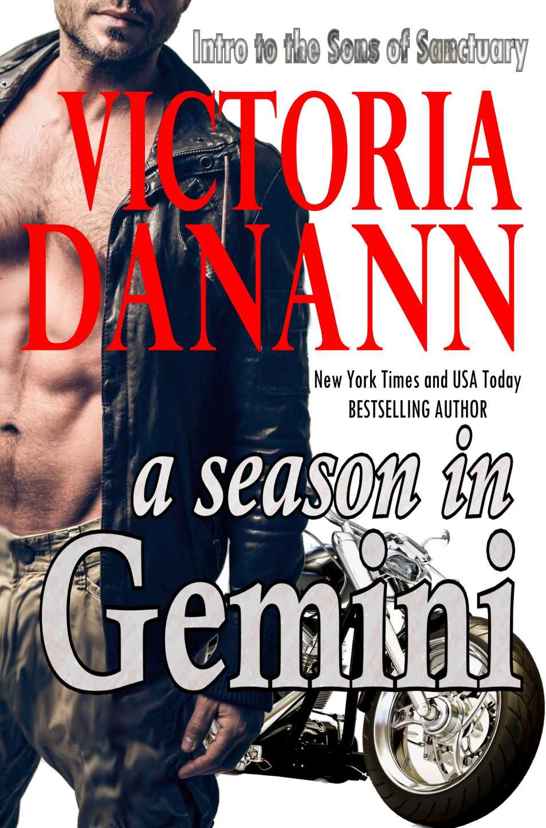 A Season in Gemini

A Season in Gemini

Intro to the Sons of Sanctuary MC Series

Read more about this author and upcoming works at
VictoriaDanann.com

A
Season in Gemini

Intro
to the Sons of Sanctuary MC Series

Garland St. Germaine had way too much fun celebrating graduation from Dartmouth with her sorority sisters. They had, apparently, managed to singlehandedly revive Dartmouth’s reputation as the rowdy Ivy League institution. As a result, Garland’s father had given her a choice of accompanying him on a three month business trip to Austin, Texas or finding a substitute for the lavish lifestyle her allowance provided. After evaluating her options, she decided she’d rather go to Texas than be homeless. So she left Park Avenue in a huff, and got on the company plane bound for the Yellow Rose Country Club and Resort. She was sure there had to be more to life than an adult version of being grounded.

Brant Fornight had made up his mind that he wasn’t interested in the life his dad’s motorcycle club could offer him. He wasn’t overly interested in money, especially not if it came with the risk of a prison sentence. He thought of himself as a simple guy even though he often pondered some of the great philosophical questions while he worked as a mechanic. He liked working with mechanical things and hadn’t needed a formal education to do that. The Sons of Sanctuary had topped off the natural born talent by mentoring and letting him work on their vehicles.

After high school, he drifted from one Austin repair shop to the next, accidentally improving his resume with each move that earned a better title and more money. When he was twenty-five, he took a job as Head Mechanic at the Yellow Rose Country Club and Resort. It never occurred to him to wonder if there was more to life.

David St. Germaine had
sent a van and two guys to move Garland out of her primo room at the sorority house
. He was extremely proud of the fact that she’d been voted Panhellenic Rep by her sorority sisters. He’d told her that it was a more impressive accomplishment than any other office because she was the embodied statement that her sorority wanted to make about their chapter at joint Greeks meetings. Garland liked having her father’s approval when getting it didn’t interfere with what she was going to do regardless.

Every day for the ten days between finals and graduation she’d packed a few things in preparation for the final move-out. She was torn between having loved university life and wanting to get on to whatever came next, even though she wasn’t clear about what that was. Certainly she’d never planned to use her B.A. in Classical Studies to gain actual employment. She could read and write Greek and Latin, sketch an Ionic column, explain Socratic Method, and accurately recount the biography of even the most obscure demigod.

A quarter million dollars of education and related expenses later, that degree and a few dollars would buy a Starbucks. But livelihood wasn’t a concern. She was the only child of a rich widower who rarely denied her anything.

She showed the movers to her room and pointed out what should go. After one last look, she plugged her phone into the console of her wine-colored Maserati, selected the music playlist she’d entitled ROAD TRIP, and pointed the car south toward New York thinking that traffic wouldn’t be bad on a Sunday. At least not
as
bad as usual. She could probably do the trip in four and a half hours with one potty stop enroute. After four years, she knew where to stop for a decent restroom.

The New York Times still printed society pages on Sundays, only the new current title was “About Town”. It included celebrity sightings along with traditional news about Social Registry members. Charity galas and Arts League balls were always popular. The concession to modernity was that in recent years there had been sensationalism-creep. The news had begun to treat society’s best more like celebrities, in the sense that scandals were printed right alongside who was seen with whom at balls, galas, museum exhibit previews, and art show openings. It had become a gossip column thinly disguised as the time-honored tradition of setting aside valuable print space for flattering the moneyed elite.

Garland pulled up in front of her building, grabbed the rolling suitcase with essential stuff, smiled at Max, the doorman, and gave him the car keys so that he could have the car parked in a two thousand dollars per month garage nearby. She might not use the car again for weeks, or even months, but it was nice to know she could.

She took a deep breath and called out to anyone who might be in the penthouse.

Since it was Sunday that would probably be either her father or no one.

She walked the length of the kitchen and beyond to a small, but elegant and sunny breakfast room that overlooked Central Park and was rarely seen by anyone other than Garland, her father, and the staff.

“
I say, ‘I’m home!’”, she repeated as she flopped into a chair opposite where her dad was having coffee and reading the paper.

David St. Germaine looked over the top of the Wall Street Journal. “So I see.”

He slid a section of the Sunday Times toward where she sat across the glass top table. “I second the ‘wow’.”

Before looking down at whatever he wanted her to see, she could tell that he was the farthest thing from happy. When she’d seen him two days before at graduation, he’d been delighted, either with her or his date for the day. There was no point in remembering her name. Her father rarely saw women more than once.

On the cusp of fifty, he was still handsome, with a little silver above his ears and a tan that never faded completely because he kept a boat at the Yacht Club and made a point of sailing, when weather and business permitted. He’d been referred to as ‘eligible bachelor’ more than once, but Garland doubted the veracity of that claim. Since her mother’s death, he hadn’t given anyone reason to think he was ‘eligible’.

She looked at the paper. The front and center color image was of none other than herself wearing a short sparkly dress that had ridden
far
too high as she fell backwards, spilling a colorful beverage as she went sprawling into the laps of laughing friends.

The headline read, “Germane Enterprises Princess Out on the Town. Daddy’s little girl lets her hair down and her skirt up.”

As she stared at the page, her father said, “Nice dress,” in a tone dripping with sarcasm.

Without looking up, she said quietly, “We were just having some fun, celebrating graduation.”

“
How many times have I told you that what you do reflects on me? And, by extension, on Germane Enterprises?”

She raised her eyes to meet his glare. “Thousands.”

“
You’re not everybody else though. Are you?”

She lowered her eyes. “No.”

She bit back a comment that tried to take possession of her mouth. Something about using condoms and clubbing with a designated driver. But she decided that sort of retort would make her sound weak and juvenile. So she said nothing. After a few seconds of staring, he continued.

“
Christ, Garland. You and your miscreant friends got thrown out of some cheap dive? That’s pretty hard to do. Places like that host Ladies’ Nights to attract young women to come in.” He let out a frustrated breath. “What are your plans?”

“
Yes, Garland. As in, what do you plan to do when you wake up tomorrow?”

“
I just finished school. I was thinking I’d take a couple of weeks. Maybe do some shopping and get together with friends before…”

Truthfully, she hadn’t gotten to that. Her vision began and ended with lunching and shopping. “I haven’t worked that out yet.”

“
Good. Then you won’t be inconvenienced to have to cancel anything.”

“
I’ve made plans for you. I’ll be spending most of the summer at the property we’re expanding in Texas. You’re coming with me.”

“
To Texas!?!” She looked as horrified as if she’d just been told she’d be summering inside a tank on a war torn border somewhere between the remnants of Arabia and the remnants of Persia.

He went on as calmly as if she hadn’t spoken. “This…” He glanced down at the tattling paper. “…is an indication that you’re not ready to make your own choices. So I’ll make them for you. Austin this summer then Wharton School this fall. Thank goodness your GPA is high enough. I’ll have to call in some favors
and
donate a fortune, probably, but you
will
get in.”

“
To Business School? I don’t want to study business. I can’t think of anything less fun. And Philadelphia? Really?”

She saw the traces of a smirk appear around his mouth. “This has nothing to do with fun, Garland. It’s about being a productive member of this family and, by extension, a productive member of society. When you have an MBA from Wharton, you’ll be ready to step into a position with Germane Enterprises and do something worthwhile with your life.”

Her eyes flashed. “You can’t make those decisions for me. I’m not a little girl.”

His face softened slightly, but was no less serious “No. You’re not. And you’re welcome to show me your independence by walking out that door with your clothes and the college degree you just earned. You can start at home plate, like I did. Instead of on third base. Like you did.”

The range of limited options flew across her vision like a rapid-sequence music video. And she didn’t like anything she saw.

She wanted to be the girl who took that option. She wanted to stand up and say, “Okay. I’m out.” But she didn’t think she was cut out for pioneering a whole new way of life.

“
I guess you win then. I’m not prepared to be homeless.”

“
It’s not a matter of me
‘winning’
. It’s about what’s best for you.” He snapped the paper and went back to reading. “We’re leaving in two days. You can shop and play with your friends until then.” He lowered the paper again long enough to say, “Do you think you can manage to stay out of the news for that long?”