Read A Season of Hope Online 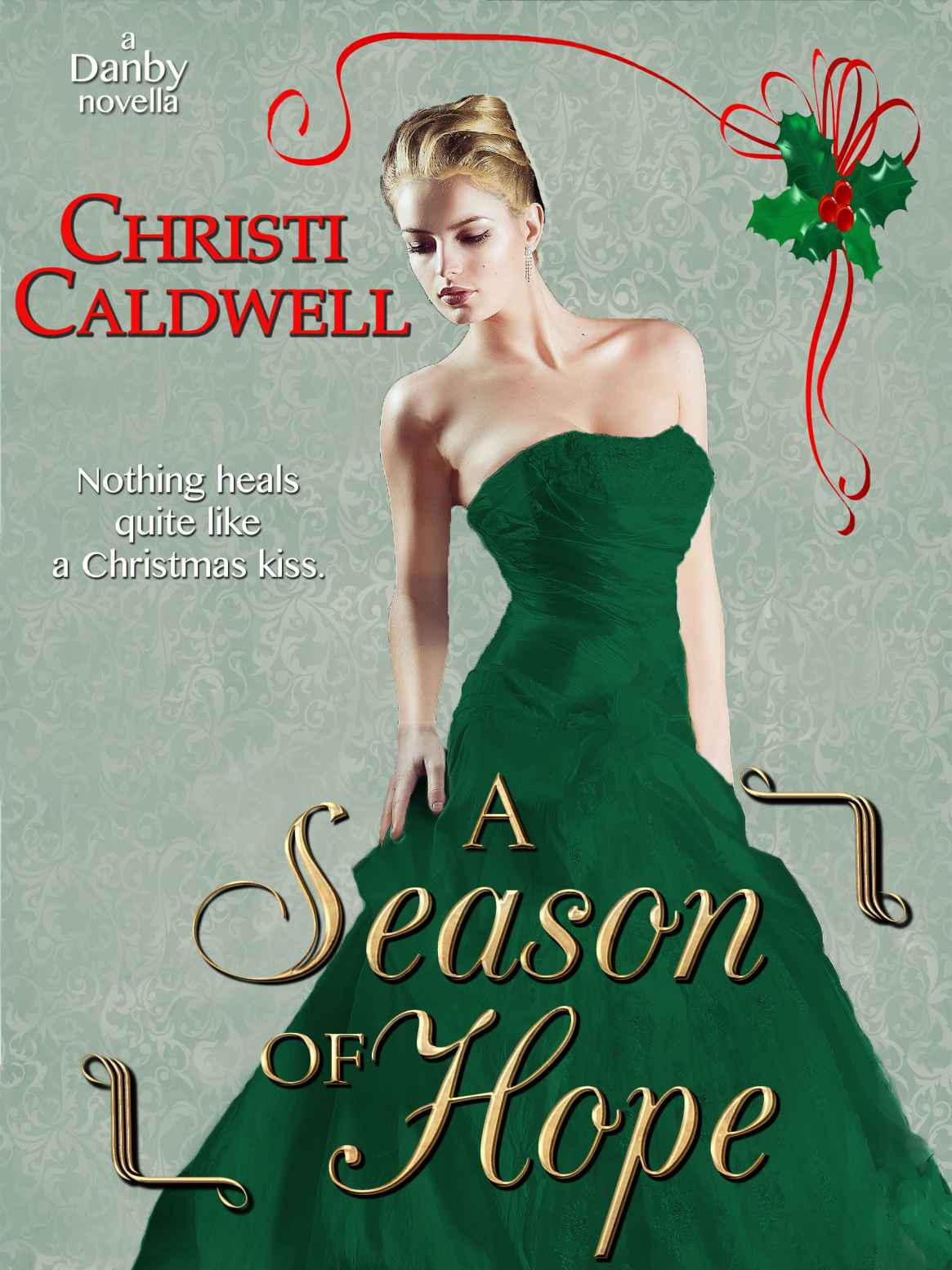 For more information about the author:

For Rory, my son and hero. Every day with you is a happily ever after.

Tremendous thanks to my amazing critique partners who took me under their wings years ago. You have been my cheerleader not only in my writing pursuits, but also in life. A special thanks to Aileen Fish. None of this could have happened without your support.

Summons from the Castle

“My, the duke is fast. I’d imagine he has assigned someone to monitor each member of our esteemed family’s activities.” Olivia gave a mock shudder. “I fear the day I receive my missive is not long off.”

It was a well-known fact that
, above all else, unwed young ladies desired an advantageous match.

It was also well-known that a twenty-three
–year-old young lady could ill afford to be particular where prospective bridegrooms were concerned.

Lady Olivia
Foster sat at the window-seat, her knees drawn to her chest. She stared out at the swirl of flakes as they danced by the windowpane, down, down, until landing on the ground below. With a sigh, she trailed a finger over the glass and followed the slow descent of another flake.

Most young ladies love
d the spring and summer season because of the balls and soirees. Olivia, however, embraced the winter. The cold weather had an almost cleansing effect and served to wash away all the lords and ladies who scurried off to their respective estates.

It also signified another Season that Olivia remained unwed and free of her father’s nagging attention.
It was only when the Seasons ended and the ton was gone, that her father’s displeasure dissipated. Then, when spring came round, his fury and disappointment bloomed like hearty crocuses.

Olivia had
heard on many scores what a disappointment she was as a young lady. Her father, the Marquess of Tewkesbury went to great pains to remind her that she had failed at a woman’s sole lot in life—to make a match.

Olivia glanced to the door.

Her mother stood, framed in the entrance. A small smile wreathed her ageless face.

Olivia returned her attention to the window. “Mother,” she greeted.

The rustle of satin skirts indicated the marchioness had sailed into the room. She took a seat beside Olivia.

“Am I making a bother of myself, daughter?”

Her mother snorted and gave a tug to a strand of Olivia’s blonde hair. They’d always had a close bond; a relationship deeper than even the mother-daughter connection. Olivia had confided things to her mother that she’d never breathed aloud to another soul; all without recrimination. Just then, melancholy as she was, Olivia rather preferred her own solitary company to a visit with her mother.

Mother tapped a finger along the edge of the window-seat. The staccato
rhythm indicated her nervousness.

With a frown, Olivia swung her legs over the side of the seat. “What is it, Mother?”

“Uh, nothing, dear. Nothing at all,” she
said, a touch too hurriedly.

`
Her mother ceased drumming her fingertips and sighed. “Lord Ellsworth requested a meeting with your father.”

Olivia frowned. Lord
Ellsworth had been the only real suitor Olivia had acquired last Season. At nearly sixty, he would have made a better match for someone her mother’s age. Still, her father had encouraged the Earl of Ellsworth’s suit for many reasons.

One: the earl was obscenely wealthy.

Olivia had begun to suspect that if the groom had made a reasonable offer for her hand,
her father would have gladly accepted.

“What is he doing here?” Olivia applauded herself on the steady deliverance of those words.

Her mother wet her lips. “You know your father doesn’t tell me anything.”

No.
Her father was quite clear on his view of women and the role they served.

Panic built in her chest. She’d thought she’d managed to escape a match with
Ellsworth but what if she hadn’t? She drew in a deep breath. No, it was silly to believe the earl was here to offer for her. She’d not seen him in months, and they’d not left off on the best of terms.

“No, I imagine he isn’t happy about your last meeting
.” Mother correctly interpreted the path Olivia’s thoughts had wandered down.

Olivia shared a smile with her mother. “It was entirely an
accident.”

Her mother nodded, her face a solemn mask. “Oh, yes, yes. I’m certain of it.”

“I mean, how was I ever to figure the earl would react so to my discourse on the European honeybee?”

“Because, every prospective mate wants to hear how the male bee explodes upon copulation?”

Olivia felt her cheeks go warm. “I didn’t say it in quite those terms, Mother.”

“And I’m sure he marveled at your scientific brain, daughter.”

Olivia chuckled. She’d happened to attend a rather dull scientific workshop at London Museum on Carolus Linnaeus’ work with the European honeybees. She’d only been in attendance because she’d known it to be the perfect place to ensure herself privacy from tedious Society members.

Olivia had been nodding off when the speaker
revealed that fascinating bit about the male bee. Said information had proved very useful when Lord Ellsworth had paid her court.

“It was hardly amusing to your father
.” Her mother’s disapproving tone interrupted her thoughts.

No, it hadn’t been. Olivia lifted her shoulder in a little shrug. “How was I to have known
the earl would react as he did?”

Sick, to be exact. The earl’s complexion had gone a grossly shade of green and he’d hurried from the room ill.

That had been the last time he’d made an appearance.

Now, it would appear as though it were her time to become ill. A knot twisted in her stomach and she had to force back the dread that climbed up her throat.

“I know,” Olivia said, her voice flat to her own ears.

Except she didn’t know it. She’d hoped that maybe, just maybe, she’d manage to escape the marriage noose.

“Not all marriages are unhappy ones,” her mother continued. “Your sister…”

“I know. Alexandra is beyond happy.”

Her sister, wed to the 5
th
Earl of Pembroke, was blissfully content. That hadn’t always been the case. Nathan had first broken dear Alexandra’s heart before doing right and soothing the shattered organ.

“Do you truly believe I can be happy with the earl, Mother?”

Olivia nodded. “I didn’t think so.”

“But you were happy once
.”

Olivia jumped up from her seat, a hand up. “I don’t want to speak about it.”

For nearly five years, she’d done a remarkable job of shoving memories of
him
to the side. How ironic that she had teased dear Alexandra over being in love, had mocked the emotion, only to then go and commit the very same faux pas.

Olivia tried not thinking about the man she’d given her heart to. She didn’t allow herself to think of him during any waking moments. It was only at night when his memory would filter into her dreams. Those times she was unable to escape his grinning façade. The midnight black hair, unfashionably long by Society’s standards.

And he promised to return
.

For nearly five years, Olivia had honored his memory and the hope of his return by scaring off prospective bridegrooms. Only now was she forced to concede—he wasn’t coming back for her, and the time of childlike games would have to end. She could not remain the Marquess of Tewkesbury’s unwed daughter forever. Society left very few options for ladies outside of marriage.

“He loved you,” her mother said.

Olivia’s throat worked up and down. She wanted to clamp her hands over her ears and drown out those words. Damn her mother for raising
his
memory.

Her mother was as unrelenting as a pug tearing at one’s skirts. “You were eighteen.”

Olivia’s toes curled in her slippers and she resisted the urge to flee. She took one more deep breath. She’d never allowed herself to believe that he had died. She would have known in that place deep inside her heart where he resided. “It matters not. He left. He didn’t return.”
And I’m the spinsterish, oddity wallflower at ton functions.

She frowned. She was about to be the oddity wed to the Earl of
Ellsworth. A little shudder wracked her frame.

Mother
reached for her hand and Olivia jumped. She’d been so enrapt in thoughts of him that she’d failed to note her mother’s approach.

Him. The
man whose name could not be named.

Mother
didn’t refer to Ellsworth but rather, Marcus Wheatley, a gentlemen her mother and sister had whole-heartedly approved of. He’d made Olivia laugh. He’d teased her.

Then he’d gone off to fight bloody
Boney.

Silly cit. That’s what happen
s when you go and fall in love with a viscount’s younger son.
Those younger sons didn’t become lords. They became officers in the military or vicars.

Oh, how she’d wished he’d been a vicar.

“You do know you could have made a match of your own choosing? You are beyond lovely.”

Olivia knew what gentlemen saw when they looked at her
: trim waist, golden Hair, fair skin, and flared hips. She might as well have been a broodmare to them.

Olivia sighed. “
Father will call for me soon?” Her dejected tone, pathetic to her own ears.

Mother hesitated and then gave a nod. “Yes.” She brushed back a loose golden curl that had escaped Olivia’s perfunctory
chignon.

“No,” her mother interrupted.

No, she supposed that ploy would not work again.

Olivia had run out of ploys, plots, and plans. She’d no longer be able to fend off her father’s plans to wed her off to…to…whichever fool was silly enough to want her.

Olivia reclaimed her seat by the window and stared out dismissively at the swirling flakes. Her mother’s golden visage, bow-shaped lips turned down in a frown, reflected back at Olivia, until she retreated.

Olivia rested her forehead along the pane of glass. It would appear the winter Season was no longer to be her favorite. “I’ve run out of excuses, Marcus.”

The sound
of muted silence met her statement.

There would be no reprieve. Not anymore. Olivia could no longer hold off her father’s machinations to see her wed.

Only divine intervention from the Lord himself would be enough to save Olivia now.

The Truth About Delilah Blue by Tish Cohen
The Mask of the Enchantress by Victoria Holt
Rose by Sydney Landon
Big Apple Dreams by Solomon, Kamery
Death of an Expert Witness by P. D. James
Forever Doon by Carey Corp, Lorie Langdon
Prisoner of Conscience by Susan R. Matthews
Angelaeon Circle 2 - Eye of the Sword by Henley, Karyn
Beautiful Sacrifice by Elizabeth Lowell
The Stranger's Sin by Darlene Gardner
Our partner