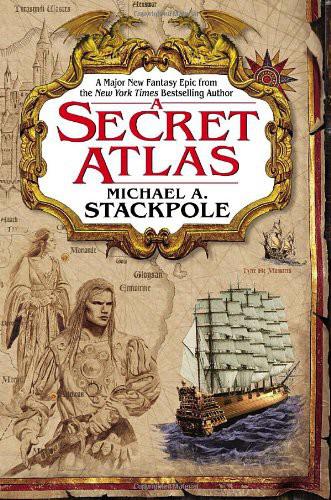 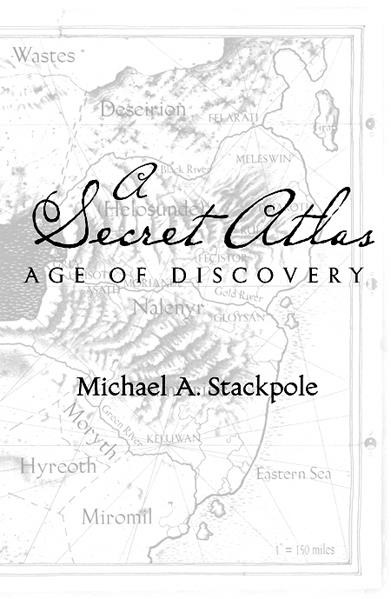 Books like this have one name on the cover, but are a team effort. The author would like

to express his thanks to Anne Groell for her editing expertise and hard work; and Howard

Morhaim and Danny Baror, agents extraordinaire, who made writing this book possible.

Two books in particular were helpful.
The Island of Lost Maps
by Miles Harvey sparked

part of this novel as I mulled over a passing comment or two in that book.
1421: The Year

some gaps in my knowledge before I wrote the book. His staff at
www.1421.tv
were

the
Stormwolf,
and for that I am very grateful.

For his courage, good sense, and willingness

to do the right thing, not the expedient one.

This is a work of fiction. Names, characters, places, and incidents either are the product of

the author’s imagination or are used fictitiously. Any resemblance to actual persons, living

or dead, events, or locales is entirely coincidental.

Copyright © 2004 by Michael A. Stackpole

Bantam Books® is a registered trademark of Random House, Inc., and the colophon is a

trademark of Random House, Inc. Spectra and the portayal of a boxed “s” are trademarks

of Bantam Books, a division of Random House, Inc.

A secret atlas / Michael A. Stackpole.

BOOKS BY MICHAEL A. STACKPOLE

THE BLOOD OF KERENSKY TRILOGY

162nd Year of the Komyr Dynasty

736th year since the Cataclysm

Moraven Tolo reached the crest of the hill a few steps before his traveling companions.

The half-blind old man who wheezed up behind him gasped involuntarily. He looked back

as his grandson and great-grandson joined him, then gestured at the city in the distance.

“There it is, Moriande, the grandest city in the world.”

The swordsman nodded slowly in agreement. The road ran down the forested hillside and

glimpses of it could be seen twisting through the Gold River valley to the city. It had been

years since he’d seen Nalenyr’s capital, and it had grown, but was still easily

recognizable. Wentokikun, the tallest of the city’s nine towers, dominated its eastern

quarter, and using that as a landmark made fixing the other places easier.

The old man, his wispy beard and hair dancing in the light breeze, nodded toward

Moriande. “The biggest tower, there to the east, is the Imperial Palace. I may not see well

now, but I see it clear. It makes me remember when I last saw it.”

Moraven remained silent, though the sight of the capital filled him with much the same

awe as it did the rest of the pilgrims. Moriande’s growth reflected the change in the world.

became a symbol of hope. While people always feared a return of the Time of Black Ice

and the magic that had spawned it, they dared believe it could be held at bay. Moriande

The pace of that growth had surprised Moraven, and it clearly had accelerated in recent

decades beneath the Komyr Dynasty. Many times over the last week Moraven had heard

about how the old man had come to Moriande eighty-one years earlier, for the first grand

Festival celebrating the Komyr Dynasty. It had survived nine cycles of nine years then,

and twice that now. With this being the ninth year of the current Prince’s Court, people

knew that the Festival was a double blessing. The old man’s hope to capitalize on that

blessing was the reason for leading his scions on the long journey north.

The city was so huge that it seemed far closer than a two-day walk from where they stood.

The Gold River split the white sprawl down the middle, with a broad oxbow curving to the

north. Six of the city’s nine towers stood in the northern half, and the other three—

including the Prince’s Dragon Tower, Wentokikun—lay on the southern side. Equally

magnificent, though harder to see at that distance, were the nine soaring bridges arching

over the sparkling river. Their height allowed even the grandest ship to pass beneath them

with ease, and their width made the Imperial Road look like a game path.

Matut, the old man, tousled his great-grandson’s hair with an arthritically twisted hand. “I

was ten when I came to the Festival. You are but nine, as old as the court and a tenth my

age. I’m sure the gods will make something of that. Your little problem will be dealt with

The little boy nodded solemnly. His right hand rubbed at his withered left arm as he looked

over at Moraven. “It will be as my grandfather says, won’t it, swordsman?”

Moraven crouched and gave the brown-haired boy a nod. “He is correct, but as my

Master’s Master told him, ‘The gods grant the tools and talent, yet yours is the effort.’ The

gods will heal you, I have no doubt, but you will have to work.”

“We might need more than a swordsman in the mill, son.” The boy’s father smiled and

tapped a belt pouch that rang with the muffled sound of coins. “We will do this right, make

our offerings to the gods, then enjoy the Festival.”

“Of course, Alait, of course.” The old man chuckled himself into a wheeze. “There will be

pleasures a young man like yourself and our friend here can enjoy. I was too young last

time, and am too old this time.”

Rising, Moraven smiled and smoothed his long black hair at the back of his neck. “You are

of a blessed age, grandfather. There will be many who will seek your touch for fortune’s

“May they all be as comely and soft as the Lady of Jet and Jade.” The old man looked at

him with rheumy brown eyes and flexed a stiff hand. “It might be I don’t see so well

anymore, but I
can
feel.”

Alait laughed and Moraven joined him. Dunos looked puzzled, and a richly robed

merchantman’s wife sniffed. She had often done so when conversations had revolved

around Matut’s stories of the Festival and all the carnal pleasures he’d seen there. She,

they had been informed, was going to the capital at the invitation of “people” who, they

were also told, would get her husband an imperial appointment—though she had always

remained vague on what it was and why he wasn’t with her.

Nalenyr. Four were entertainers coming up from Erumvirine, while the rest were from

Nalenyr itself. They’d all agreed that traveling in a company of eighteen was a very good

omen, and numerous offerings had been made in the shrines scattered along the roadway

to ensure the favor of the gods. Each made offerings according to his means, with the

devotions than the more extravagantly dressed. And many made extra offerings for Dunos

in payment for little chores he performed on the road.

The merchantman’s wife had neither made offerings for Dunos nor employed him, running

him off with waves and snorts. In his grandfather’s words, she had been “Loud in prayer,

but in offerings spare.”

Moraven Tolo fell into the middle of the two groups, being neither rich nor poor. Black

linen. Only his quilted sleeveless overshirt of white silk, with the wide starched shoulders

and the black tigers embroidered breast and back, hinted at any prosperity. It wrapped

closed and was belted with a black sash.

He’d slipped his sword into the sash, only just having reclaimed it from the boy. Dunos

had proudly carried it for him, and Moraven had made offerings to the gods in

recompense. He alone in the company bore a sword, though he was not the only one

armed. Two of the farmers had flails, which they carried over their shoulders.

Matut’s eyes half lidded and the old man shook. “It was here it happened on that first trip. I

Dunos clutched at his grandfather’s left hand. “The bandits?”

The merchantman’s wife hissed. “Be quiet, child. Don’t give the gods ideas.”

from the woods to the center of the road. “The mind of gods was not the womb of this

The female bandit, wearing black beneath an overshirt of scarlet and gold, drew her sword

and led her two companions lazily toward the pilgrims. To her left the smaller one, wearing

a motley collection of greens and browns, fitted an arrow to his recurve bow. He hung

back slightly and positioned himself for a clear shot.

The third figure wore a ragged brown robe that might have come to midshin on most men,

but barely covered the tops of his thighs. A long tangle of unkempt hair matched the

beneath his fingernails. As imposing as he was, however, the long-hafted mallet he

carried made more of an impression. With a head as big around as a melon and an

irregular darkness staining the face, it was clearly intended for crushing skulls.

The bandit woman tried to smile, but a scar on her left cheek curdled the expression. “We

welcome you to the Imperial Road. We are your servants, who keep it open and free of

banditry. Surely you will want to show your appreciation.”

Conoursai, the merchantman’s wife, waved them aside with a courtly gesture full of

arrogance. “This is the Prince’s highway. His troops keep it clear.”

The highwaywoman shook her head. “Clearly, then, they are negligent in their