Read A Sense of Entitlement Online

A Sense of Entitlement 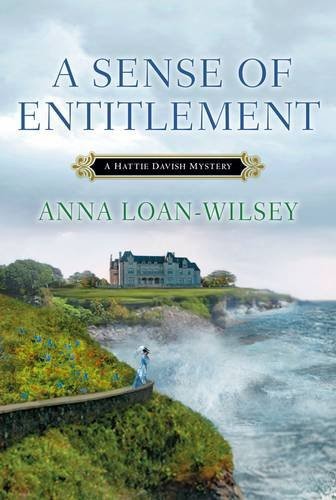 Praise for Anna Loan-Wilsey and Her Hattie Davish Mysteries!

A LACK OF TEMPERANCE

“Ms. Loan-Wilsey writes with vivid imagery that immediately brings to life the late nineteenth century in this engrossing and thoroughly enjoyable tale. Miss Hattie Davish is a force to be reckoned with, and I’m eagerly awaiting more of her adventures.”

“Fans of historical mysteries should be delighted with this debut.”

“
A Lack of Temperance
shows no lack of a fresh setting, spunky amateur detective, fascinating characters and intriguing mystery. Anna Loan-Wilsey has a real talent for pulling the reader into a past world of both charm and chaos. Heroine Hattie and her typewriter certainly travel well! I can’t wait to read her next adventure.”

“Eureka Springs is usually a peaceful spa resort, but when Hattie Davish arrives with her typewriter she finds the town in uproar. Temperance ladies are attacking saloons and her new employer is missing. This is a fast-paced and fascinating read, peopled with feisty females, giving us a glimpse of how far women were actually prepared to go for the cause.”

A LACK OF TEMPERANCE

A SENSE OF ENTITLEMENT

A SENSE OF ENTITLEMENT
ANNA LOAN-WILSEY

To Kenneth George Loan, my father

I
was the only one on deck, or so I thought. Water dripped from the brim of my straw hat as rain splattered against my umbrella. My knuckles turned white as I clung desperately to the slippery railing. The boat lurched beneath my feet and I thanked Providence yet again that I’d forgone eating supper. Only someone as ill at ease as me would be out in this weather. As I glanced about me, the satin ribbon on my hat fluttered for a moment in the wind and then stuck to my damp cheek. I peeled it away as I took another peek beneath my umbrella. I saw no one.

Why had I let Sir Arthur talk me into this?

Looking back I realized, as always, I hadn’t had much of a choice. But I had erroneously thought that I would enjoy myself. Six weeks in Newport, the “Queen of Resorts,” with a plethora of new plant species to collect, miles of hiking along seaside cliffs, and only some light typing duties. It would be like a vacation. At least that’s what Sir Arthur said. He and his wife, Lady Phillippa, had rented a cottage in Newport for the summer Season, and having a few loose ends to finish up with his manuscript, Sir Arthur suggested that I accompany them. I grew up in the Middle West. To me an ocean was a static black and white image I saw through the lens of my mother’s stereoscope. I leaped at the chance to witness the vast, churning blue sea for myself. But Sir Arthur never mentioned a boat ride.

I’d never been on a boat before and had never planned to be on one. People die on boats. At least that’s what my mother told me over and over when I was a child. If I ever questioned her she would remind me that her brother burned to death on the
Sultana
and my father’s uncle drowned after falling out of his fishing boat on Oneida Lake in New York. I grew to know she was right. One can rarely pick up a newspaper these days without finding some tragedy that is linked to the sinking or explosion of a ship. So why in heaven’s name did I have to board this vessel? Sir Arthur, of course. When Sir Arthur insists on something, it’s not my place to question him. In this case, I may have if a young woman in a white Gainsborough hat hadn’t impatiently prodded me twice in the back of the knees with her baby carriage, thus propelling me into the crowd and toward the gangplank. Before I could voice any protest, I was aboard and following the steward to my room. My stomach churned, either from a slight case of seasickness or from swallowing the terror I felt but couldn’t show, from the moment the ship pulled away from the dock. And the trip would take almost twelve hours!

Fresh air on deck didn’t help. Staying belowdecks in my berth that I shared with Miss Kyler, Lady Phillippa’s lady’s maid, didn’t help. Strolling the length of the ornate Grand Saloon, admiring the high gilded ceilings and intricate panel carvings, didn’t help. Listening to the afternoon concert on the hurricane deck didn’t help. I kept my seat through the march, the schottische, and the overture, but when the orchestra struck up Faust’s waltz, “Golden Wedding,” I felt my stomach lurch and spent the next twenty minutes clutching a water basin in the public washroom. I skipped attending the evening concert altogether. Entering the dining room for dinner, with its scents of freshly baked bread, smoked meat, and butter, certainly didn’t help. I hadn’t eaten since breakfast yesterday. Even listening to Miss Kyler’s cheerful banter as she described past summers in Newport with Sir Arthur and Lady Phillippa in the Gallery Saloon sipping ginger ale didn’t help. Regardless of the fact that to all ostensive purposes, the
Providence
was a floating palace for all to enjoy, nothing helped. And nothing would alleviate my fears and settle my stomach until I had my feet planted firmly on dry land.

Eventually Miss Kyler bid me good night. As sleep was out of the question, I thought I would try fresh air again. So despite the late hour and the rain, which started an hour into our journey, I sought solace out on deck. I didn’t find it.

I jumped at the sound of the door and clenched even tighter to the railing. Before I could reproach myself for reacting so violently to the closing of the door, I heard it, over the sound of the rain spattering against the deck and the waves crashing against the sides of the boat—an audible scraping noise. I looked toward the sound to see a broad-shouldered man in a raincoat and round-crowned rubber hat, his back to me, pushing a steamer trunk along the deck. What was he doing? I wondered. Why would he have his travel trunk up on deck in the rain? Trunks were not rainproof and I visualized the effects that the rain was having on its contents: books ruined, shirts stained, hats limp and misshapen. He pushed his burden toward a gap in the railing and stopped. Why would anyone be so reckless? Surely he knew he could fall?

“Sir!” I yelled out. “Please take care!” He stepped closer to the edge. “Watch out!” I screamed to no avail. With the sound of the waves, the rain, and the distance between us, I don’t think he heard me.

The boat lurched again beneath my feet. I wrapped the crook of my arm around the railing, securing myself even more as the man swayed slightly but didn’t retreat from his post. Now all I could do was watch.

To my relief he gained his balance. He looked about him, as if to check for witnesses to his folly. He spotted me. We locked eyes for a moment and he scowled. Water dripped from the ends of his long, thin black mustache. A shiver went down my back that had nothing to do with the cold wind at my back. I turned my face away, appearing to gaze back out over the ocean, but watched him out of the corner of my eye. He shook his head and dismissed me with a wave of his hand as he turned back to the trunk. He crouched down and with one swift push shoved the trunk overboard. I leaned slightly over the railing, nearly losing my umbrella to the wind, and watched the trunk fall through the air and disappear into the darkness. I heard it land with a splash and imagined it bobbing up and down in the waves for a few moments before upending itself and sinking straight into the water.

What was in that trunk? I wondered. Why would anyone want to throw it overboard? My mind raced and the same thought came back to me again and again:
a dead body
. After finding one of my employers in one, I’d never been able to look at travel trunks the same way again. And now one was sinking down to the bottom of the ocean right below me. The fear of the boat, seasickness, and the anxiety from watching what might have been the disposal of yet another dead body were too much. I couldn’t take it anymore. I retched over the side of the railing. With my stomach now empty, I wiped my mouth with a handkerchief, already damp from the rain, staggered back from the railing, and felt for the wall behind me. I inched along the wall. As I approached a door, it flung open, the light from within flooding the deck. A short, brawny man in his early fifties with a partially bald head, a graying dark brown mustache, deep-set eyes, and a dimpled chin stood in the hall. He was hatless yet otherwise impeccably dressed in formal evening attire and he looked vaguely familiar.

Where have I seen him before?
I wondered. He recoiled as I dashed by him out of the rain.

“Excuse me,” I said, but the gentleman was already preoccupied with the man from the deck, who had joined him from outside. I stepped around the corner. I stopped to catch my breath, not yet trusting my wobbly legs to carry me back to my room. Someone began to whistle Beethoven’s “Ode to Joy.”

“Who was that?” one of the men said, extremely vexed. I distinctly heard the sound of a hand brushing with the grain of a coat sleeve. “And stop doing that.” The whistling stopped.

“Nobody, just some seasick lady who was out on deck,” was the other’s reply. “She’s nothing to worry about.”

“Nothing? The damn woman got me wet!” the first man said.

“Sorry, boss. I can find her for you.” I held my breath. Little did they know how easily I was to be found.
And what then?
I wondered.

“Yeah, it’s gone. And trust me, no one will ever find it either.”

“They won’t be able to mistake the message, boss.”

“Good, for I will not have my Season disrupted, Doubleday. Whatever it takes, do it.”

“Yes, sir,” the man called Doubleday said. “At least that little gnat won’t be bothering you again.” Little gnat? Were they talking about me or someone else?

“Let’s hope no one bothers me again,” the gentleman said. “Understand?”

“Let’s hope so. Now get out of here. I don’t want anyone seeing us together.” The whistling started again.

That was my cue. Before the men turned the corner to find me eavesdropping, I tucked my umbrella under one arm, put my handkerchief to my mouth just in case I got queasy again, picked up my skirts, and ran.

Rebellion (A Titan Romance Book 1) by Rowan Bishop
SEAL The Deal by Sharon Hamilton
Loved by You by Kate Perry
The Heiress by Jude Deveraux
The Contrary Tale of the Butterfly Girl: From the Peculiar Adventures of John Loveheart, Esq., Volume 2 by Ishbelle Bee
Gone Fishin' by Walter Mosley
Resist (London) by Breeze, Danielle
Writing Mr. Right by Wright, Michaela
Tides of Truth [02] Higher Hope by Robert Whitlow
The Blackbird Papers by Ian Smith
Our partner