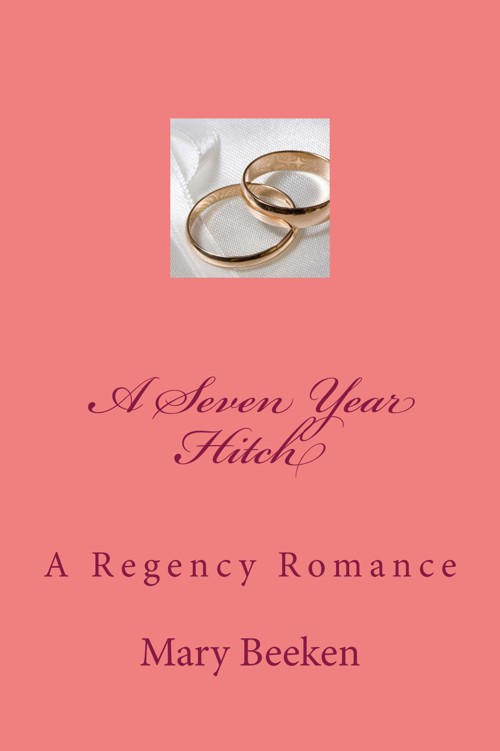 To Andy, E
rika and Markus with all my love.

I would like to thank my family and friends for their continuing love and support.

Many thanks also to Margaret N
icklin who has been a good friend for many years and without whom this book would not have been published.

A s
pecial thank you goes to Dizzy and Minnie for keeping me company whilst I tapped away on the laptop.

“We haven’t got all night man, so get on with it!”

Gerald was not renowned for his patience and now, whilst under the influence of strong alcohol which had been consumed almost continuously since being sent down from
Oxford two days before, he could exercise none at all.  His right hand was clasped around the forearm of his sixteen-year old sister, Erica who was making a valiant effort to free herself from his grasp by alternately twisting her body and thumping her brother.

“But my lord, please be reasonable. I cannot possibly marry Miss Erica to this gentleman. She is most definitely not willing and indeed, she does not even know him.” Mr. Ernest Beveridge, a man in his fifties spoke in a calming
tone which he hoped would exercise some restraint on the drunken Viscount whom over the years he had Christened, tutored and guided on his journey to manhood. At this moment in time however he could be forgiven for perhaps feeling he had failed in his endeavours to do a good job.

“Besides
,” he continued “I cannot perform a marriage without either the banns being read or a special license or as you haven’t….”

“That’s where you’re wrong
,” interrupted Gerald “We picked up a special license on our way down here so stop your whining and get on with it man!”

Mr
Beveridge being a gentleman of the cloth never used language unbecoming to his calling but in such unusual circumstances he could not prevent himself from uttering a curse under his breath before continuing.

“Nevertheless
my lord, a marriage between these two people where the bride is so obviously unwilling cannot take place.”

“No I will not!” Erica stamped down hard on his foot but as this inflicted little pain because he was wearing stout riding boots and she only thin satin slippers, she swung her free arm around and caught him in his midriff.

“Oomph,” Gerald doubled over but retained his firm grasp on her arm.

“Now
Erica,” Gerald slurred. “My friend here finds himself temporarily strapped for cash and so as you’re an heiress, I said he could marry you. He’ll be solvent again and you can boast to all your little friends that you married before any of them have even left the schoolroom and I won’t have to arrange your come-out and all that nonsense in a couple of years. See? Everyone happy.”

“I
haven’t left the schoolroom yet you idiot! I will not marry him and I suggest you seriously reconsider him as a friend if this is how he makes you behave, you drunken lout!”

“There is nothing more to be said
,” the Reverend Beveridge announced bracingly. “Now why don’t you go home gentlemen and I’m sure after a good sleep, you will realize what a ludicrous idea it was and consider yourselves fortunate that the marriage did not take place.”

Turning to Erica he added in a lowered voice
, “Perhaps you should stay with us tonight. I’ll ask Patience to have a room prepared.”

But Gerald was belligerent in his drunkenness and
would not be put off.

“Enough of your moaning
Beveridge. My sister will marry Ross tonight: Now. Do you hear?  So get on with it,” he growled.

“Over my dead body!” Ernest Beveridge lost his temper and retort
ed at a volume that constituted for him, a shout but which for lesser mortals, would have been only just above normal.

“That can easily be arranged,” d
rawled a deep voice and the tip of a sharp knife came to rest against the vicar’s neck.

The reaction was instant. Everyone froze and for a few seconds resembled a tableau from a bad drama before brother and sister spoke at once, shattering the silence within moments of its birth.

“Put that knife down! How dare you threaten the Reverend?”

“Oh I say, well done
Ross. I daresay he’ll now see that we mean business and we can get this service over and done with. All this arguing makes a man thirsty.”

Erica turned to her prospective husband who continued to hold the knife poised at Ernest Beveridge’s now trembling throat. Although she registered that he was over six fe
et tall with dark, unkempt hair, she was blind to every other detail as she could not see beyond the drunken man who threatened the vicar and her future. She was too young and inexperienced of inebriated young men to ascertain whether he would carry out his threat or indeed whether he was bluffing.

Their eyes met and held;
hers angry, his challenging but with she suspected, a hint of amusement. Erica sighed and turned back to the vicar.

“It is not worth your life
Mr. Beveridge; perform the ceremony if you will”

“My dear girl, you cannot go through with this
,” he replied

“You heard her Beveridge,” snapped Gerald “she agrees so carry on
; say the damned words. Here straighten that cravat Ross; you can’t get married looking like a scarecrow!”

Whils
t the young men were distracted Erica spoke in a whisper, only audible to Reverend Beveridge.

“Don’t worry
Mr. Beveridge. If you go ahead and marry us tonight, I’ll see Uncle Richard first thing tomorrow about having it annulled. I have every confidence that not only will he get it annulled quickly but will tear such a strip off Gerald he will never behave in such a harebrained manner ever again. He’ll be begging my forgiveness for the next ten years at least!”

The vicar nodded glumly, seeing no alternative to their predicament. At that moment Mrs. Patience Bever
idge who, up until now had been a horrified observer, hurried forward and offered some much needed advice. “When you get home, make sure you go straight to your room and lock yourself in with your maid. We don’t want there to be any chance of him claiming the marriage has been consummated.”

“What do you mean?” asked Erica

“Never mind now, dear. Just do as I say and I’ll explain it all to you later.”

So without further ado Miss Erica Wilmshurst, spinster took as her lawful married husband albeit only tempora
rily, Ross Devereaux; a chance met new crony of her brother.

“Seven years! A real farce would you not agree uncle? Next month will mark the seventh year of my marriage and in all that time I have not laid eyes on my husband. Some of my acquaintances would no doubt envy me for such a predicament for they would dearly love to have their spouses disappear; leaving them free to follow their own inclinations.”

Erica who had been studying the scenes in the street below, turned back into the room and crossed to perch on the chair in front of the large
, cherry wood desk behind which sat a distinguished man in his early fifties.

“While others, my d
ear,” he smiled in response, “Would consider it rather careless of you to have found and lost a bridegroom all within the same day!”

“It is as well then that in a few short weeks he shall quietly and unceremoniously be declared dead and I will not even have the inconvenience of arranging a funeral or donning mourning clothes. I shall be the perfect epitome of a ‘merry widow’!”

Her hasty and unconventional marriage was a closely guarded secret and after subsequent years of tactful enquiries into the whereabouts of her errant groom and attempts to find a loophole in the law that would allow for its annulment, her solicitor had stated that there was only one way to proceed; wait the compulsory seven years before having him declared dead.

“I will be re
lieved to have all this settled my dear. You have paid a high price for your brother’s youthful follies and I will be pleased to see you get on now with your life.”

“By which you
mean marry some respectable man I suppose!” laughed Erica. “I am sorry to disappoint you uncle, but I have truly had my fill of the wedded state and having attained my freedom, will have no wish to enter it again for some time; if ever!”

“You will change your mind I’m sure. You have plenty of young men sniffing around you and if none take your fancy, there is always the Season.”

“Have my various aunts put you up to this? They are tenacious indeed in their efforts to see me married! Please do not join their ranks of matchmaker now that I am about to become single again. I am sure I could not bear it!” she chuckled before adding; “Besides my life has not been on hold. I have been incredibly busy learning to manage the estate in Gerald’s absence.”

Although the solicitor Sir Richard Stanier was no blood relation to Erica, he had undertaken bot
h her and Gerald’s guardianship when they had been five and eight respectively; upon the demise of their parents in a boating accident. This task he had shared with her Great Uncle James until her brother had assumed responsibility on his twenty-first birthday. The fact that Gerald had promptly married her off as it later transpired, to a fellow he had only met the day before, was a source of heartache to the solicitor who was weighed down with the guilt of not having persuaded her parents against this change in guardianship when they had written their will. But of-course no one could have foreseen the sudden storm that had crashed the yacht mercilessly against the rocks, leaving the two infants without either parent. The drawing up of the will was seen as wholly sensible but no one truly believed its terms would have to be implemented and adhered to. The Viscount and his Viscountess were strong and healthy and with the arrogance of youth, thought that they would live until well past their dotage. Sir Richard sighed deeply as he recalled those bleak days and months following the accident. The children had been inconsolable; crying for their Mama and Papa, whilst he had acutely mourned the death of his dear friends.

Erica always called him Uncle Richard and loved him as dearly as though he were a true relative. He in turn doted on her and, having
been blessed with just one son Michael, tended to look on her as a daughter.

He also cared deeply for G
erald, whom he treated as a son and who despite his rather wild years at Oxford, had turned into a responsible and well-respected gentleman.

Erica, noting his dist
raction stood and paced several times around the large and tastefully furnished office before glancing once more out the window. Only when she heard his sigh and knew that his reveries were over, did she turn and moving to the leather chair across the desk from Sir Richard, flopped down in a way that would have provoked a reproof were any of her aunts present. She sighed deeply herself before chewing on her lower lip, a sure sign that she was perplexed and still pondering on her absent husband.