Read A Shadow In Summer Online

A Shadow In Summer 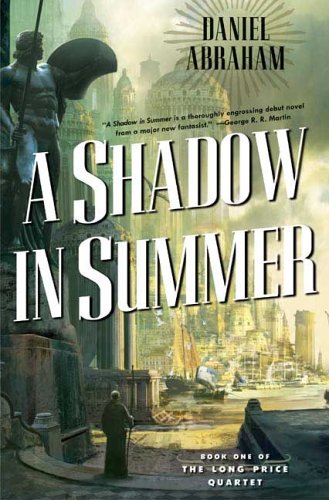 A SHADOW IN SUMMER

BOOK One of THE LONG PRICE QUARTET

This is a work of fiction. All of the characters, organizations, and events portrayed in this novel are either products of the author's imagination or are used fictitiously.

A SHADOW IN SUMMER: BOOK ONE OF THE LONG PRICE QUARTET
Copyright © 2006 by Daniel Abraham
All rights reserved, including the right to reproduce this book, or portions thereof, in any form.

To Fred Saberhagen, the first of my many teachers

Romantic visions aside, writing is not something often done in isolation. I would like to thank everyone whose input made this book better than I could have done alone. Especially Walter Jon Williams, Melinda Snodgrass, Steve and Jan Stirling, Terry England, John Miller, Sally Gwylan, Yvonne Coats, Emily Mah, Sage Walker, Victor Milan, George R.R. Martin, and all the various members of the New Mexico Critical Mass Workshop.

Thanks are also due to Shawna McCarthy for her faith in the project, and Jim Frenkel for his hard work and kind attentions to a first-time novelist.

But I am especially grateful to Connie Willis, who gave me my first advice on the book, Tom Doherty, who gave me my last, and Katherine Abraham, without whom it wouldn't have been anywhere near as fun in between.

Otah took the blow on the ear, the flesh opening under the rod. Tahi-kvo, Tahi the teacher, pulled the thin lacquered wood through the air with a fluttering sound like bird wings. Otah's discipline held. He did not shift or cry out. Tears welled in his eyes, but his hands remained in a pose of greeting.

"We are honored by your presence, most high Dai-kvo," Otah said sweetly, as if it were the first time he had attempted the ritual phrase. The old man sitting before the fire considered him closely, then adopted a pose of acceptance. Tahi-kvo made a sound of satisfaction in the depths of his throat.

Otah bowed, holding still for three breaths and hoping that Tahi-kvo wouldn't strike him for trembling. The moment stretched, and Otah nearly let his eyes stray to his teacher. It was the old man with his ruined whisper who at last spoke the words that ended the ritual and released him.

"Go, disowned child, and attend to your studies."

Otah turned and walked humbly out of the room. Once he had pulled the thick wooden door closed behind him and walked down the chill hallway toward the common rooms, he gave himself permission to touch his new wound.

The other boys were quiet as he passed through the stone halls of the school, but several times their gazes held him and his new shame. Only the older boys in the black robes of Milahkvo's disciples laughed at him. Otah took himself to the quarters where all the boys in his cohort slept. He removed the ceremonial gown, careful not to touch it with blood, and washed the wound in cold water. The stinging cream for cuts and scrapes was in an earthenware jar beside the water basin. He took two fingers and slathered the vinegar-smelling ointment onto the open flesh of his ear. Then, not for the first time since he had come to the school, he sat on his spare, hard bunk and wept.

"T
HIS BOY,"
the Dai-kvo said as he took up the porcelain bowl of tea. Its heat was almost uncomfortable. "He holds some promise?"

"Some," Tahi allowed as he leaned the lacquered rod against the wall and took the seat beside his master.

"I recall his brothers. Also boys of some promise. What became of them?"

"They spent their years, took the brand, and were turned out. Most are. We have three hundred in the school now and forty in the black under Milahkvo's care. Sons of the Khaiem or the ambitious families of the utkhaiem."

Tahi took a pose of agreement, the cant of his wrists giving it a nuance that might have been sorrow or apology.

"Not many are both strong enough and wise. And the stakes are high."

The Dai-kvo sipped his tea and considered the fire.

"I wonder," the old man said, "how many realize we are teaching them nothing."

"We teach them all. Letters, numbers. Any of them could take a trade after they leave the school."

"If they realize that, most high, they're halfway to your door. And for the ones we turn away . . . It's better, most high."

Tahi shrugged and looked into the fire. He looked older, the Dai-kvo thought, especially about the eyes. But he had met Tahi as a rude youth many years before. The age he saw there now, and the cruelty, were seeds he himself had cultivated.

"When they have failed, they take the brand and make their own fates," Tahi said.

"We take away their only hope of rejoining their families, of taking a place at the courts of the Khaiem. They have no family. They cannot control the andat," the Dai-kvo said. "We throw these boys away much as their fathers have. What becomes of them, I wonder?"

"Much the same as becomes of anyone, I imagine. The ones from low families of the utkhaiem are hardly worse off than when they came. The sons of the Khaiem . . . once they take the brand, they cannot inherit, and it saves them from being killed for their blood rights. That alone is a gift in its way."

It was true. Every generation saw the blood of the Khaiem spilled. It was the way of the Empire. And in times when all three of a Khai's acknowledged sons slaughtered one another, the high families of the utkhaiem unsheathed their knives, and cities were caught for a time in fits of violence from which the poets held themselves apart like priests at a dog fight. These boys in the school's care were exempt from those wars at only the price of everything they had known in their short lives. And yet . . .

"Disgrace is a thin gift," the Dai-kvo said.

Tahi, his old student who had once been a boy like these, sighed.

T
HE
D
AI-KVO
left in the morning just after dawn, stepping through the great bronze doors that opened only for him. Otah stood in the ranks of his cohort, still holding a pose of farewell. Behind him, someone took the chance of scratching—Otah could hear the shifting sound of fingers against cloth. He didn't look back. Two of the oldest of Milahkvo's black robes pulled the great doors closed.

In the dim winter light that filtered through high-set, narrow windows, Otah could see the bustle of the black robes taking charge of the cohorts. The day's tasks varied. The morning might be spent working in the school—repairing walls or washing laundry or scraping ice from the garden walkways that no one seemed to travel besides the boys set to tend them. The evening would be spent in study. Numbers, letters, religion, history of the Old Empire, the Second Empire, the War, the cities of the Khaiem. And more often these last weeks, one of the two teachers would stand at the back of the room while one of the black robes lectured and questioned. Milahkvo would sometimes interrupt and tell jokes or take the lecture himself, discussing things the black robes never spoke of. Tahi-kvo would only observe and punish. All of Otah's cohort bore the marks of the lacquered stick.

Riit-kvo, one of the oldest of the black robes, led Otah and his cohort to the cellars. For hours as the sun rose unseen, Otah swept dust from stones that seemed still cold from the last winter and then washed them with water and rags until his knuckles were raw. Then Riit-kvo called them to order, considered them, slapped one boy whose stance was not to his standards, and marched them to the dining hall. Otah looked neither forward nor back, but focused on the shoulders of the boy ahead of him.

The midday meal was cold meat, yesterday's bread, and a thin barley soup that Otah treasured because it was warm. Too soon, Riit called them to wash their bowls and knives and follow him. Otah found himself at the front of the line—an unenviable place—and so was the first to step into the cold listening room with its stone benches and narrow windows that had never known glass. Tahi-kvo was waiting there for them.

None of them knew why the round-faced, scowling teacher had taken an interest in the cohort, though speculations were whispered in the dark of their barracks. The Daikvo had chosen one of them to go and study the secrets of the andat, to become one of the poets, gain power even higher than the Khaiem, and skip over the black robes of Milahkvo entirely. Or one of their families had repented sending their child, however minor in the line of succession, to the school and was in negotiation to forgo the branding and take their disowned son back into the fold.

Otah had listened, but believed none of the stories. They were the fantasies of the frightened and the weak, and he knew that if he clung to one, it would shatter him. Dwelling in the misery of the school and hoping for nothing beyond survival was the only way to keep his soul from flying apart. He would endure his term and be turned out into the world. This was his third year at the school. He was twelve now, and near the halfway point of his time. And today was another evil to be borne as the day before and the day ahead. To think too far in the past or the future was dangerous. Only when he let his dreams loose did he think of learning the secrets of the andat, and that happened so rarely as to call itself never.

Riit-kvo, his eyes on the teacher at the back as much as on the students, began to declaim the parable of the Twin Dragons of Chaos. It was a story Otah knew, and he found his mind wandering. Through the stone arch of the window, Otah could see a crow hunched on a high branch. It reminded him of something he could not quite recall.

"Which of the gods tames the spirits of water?" Riit-kvo snapped. Otah pulled himself back to awareness and straightened his spine.