Read A Shiver At Twilight Online

A Shiver At Twilight 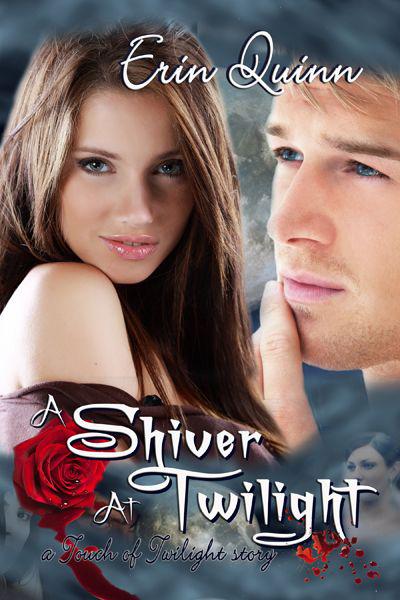 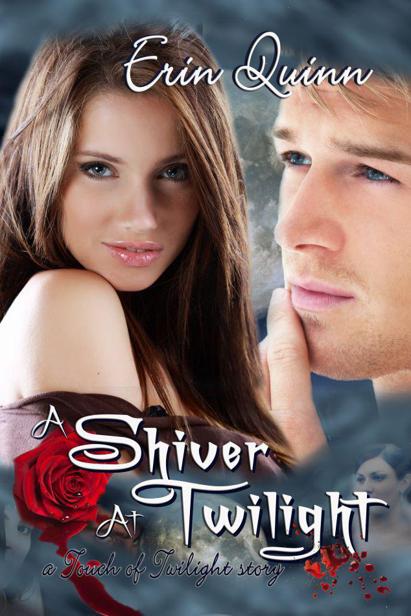 A Shiver at Twilight

Like an omen, the rain turned the lonely stretch of highway into a dark unknown. Carly thought it a bad sign in a day that had been filled with them.

The storm had started an hour after she left Phoenix behind and with each mile it became fiercer, more determined to make the simple three hour drive from Phoenix a harrowing passage. When she’d left her apartment, it had been ninety-six degrees out—in October for heaven’s sake. But now the temperatures had plunged and the pelting rain looked slushy. And it was cold, even for the mountains of northern Arizona. Cold enough to turn the rain into snow at any minute. Snow, on Halloween. It was unheard of.

Beyond the blacktop, the mountains sloped and peaked. A fire that had burned out of control in the summer had destroyed thousands of acres and thick patches of blackened pines poked from the swamped earth like corpses in a Wes Craven horror fest. Beside them, pockets of healthy growth thrived, giving the scenery an eerie patchwork effect.

At last she saw the sign: Canyon Veil, Two Miles. She slowed, searching for any trace of Jillian’s BMW. The police said it wasn’t here.

But the police didn’t know what Carly knew and she couldn’t tell them, no matter how much she wanted to.

Frustrated she pulled to a stop on the shoulder, knowing she was in the right place. She grabbed her umbrella from the backseat and left the car running as she stepped out into the sleet and rain. A few tiny bits of taillight glass lay shattered on the shoulder, but it could have been there from another car, another accident.

Her headlights illuminated a dark passage down the steep drop at the edge of the road and carefully she inched to the side, leaning to look down. Something glinted in the distance. There—a gleam of silver.

She hurried back to her VW Bug, grabbed her cell phone and flipped it open. No bars on the display. In vain, she moved up and down the side of the road, praying she’d hit a pocket where a cell signal might be picked up.

Finally, she shoved the phone in her pocket with a muttered curse. She’d have to drive into town and convince the police to come back with her. They’d listen, once she told them she’d found the wreckage.

Before crawling behind the wheel again, she looked down one more time. The sleeting rain drove hard from the sky and hit her umbrella with a drumming sound. The freezing cold made her shake, but she knew the metal glinting below was Jillian’s BMW.

She cupped her hands to her mouth and called out, “Jillian! Jillian!”

Silence chased her echoing call back. She took another step and tried again with no response.

The wind howled around her and grabbed her umbrella just as Carly turned to go back to her car. She stumbled, trying to catch it as the gust wrenched the handle from her hand.

Beneath her, the ground gave out. She fell, face down in the gravel and mud, the air knocked out of her.

She struggled to her skinned hands and knees and slipped again, losing more ground. Panic tried to crowd in, but Carly gave it the good fight. There was no need for it. She just had to get a foothold and heft herself up.

Instead she skidded again, scrabbling for something to grab onto as the soft shoulder eroded beneath her.

It felt like quicksand as she dropped another foot and then the earth simply gave and she plummeted down the steep incline, screaming as the landslide catapulted her faster and faster. She bumped over roots and hidden stones, feeling the mud and muck as she rolled and bounced. The rushing water had carved out a path of least resistance and it snaked down the hillside, taking her with it as plunged to the bottom.

She hit with a thud that knocked her breathless and lay stunned in a gulch at the base of the hill, looking up at the freezing sleet gushing from the sky. Slowly she moved her arms and then her legs. Terrified she wouldn’t be able to, she tried to sit. Pain screamed from every joint, but she managed. Shaking so hard her teeth chattered, Carly stood. Nothing seemed broken. Everything still attached.

Up high she saw her car, still perched on the side of the road, lights on, engine running. The canyon wall rose steep and slippery, and she tried to climb up only to fall back where she started. She fought the odds for long, painful minutes before admitting defeat. Unbelievably, unless Spiderman swooped down to get her, she had no way up.

With a sinking feeling, she limped her way to the gleam of silver she saw through the gloom.

Had Jillian survived this? Terrified she peered into the car. A body sat in the passenger seat.

She clamped her hands over her mouth and peered in at the still form of a woman slumped against her seatbelt—but it wasn’t Jillian. Carly reached a shaking hand through the shattered window and pressed her hand to the woman’s throat, feeling for a pulse, finding none. The body was cold, deathly cold.

With a strangled scream, Carly backed away.

Turning in place, she shouted Jillian’s name again and again, but only the echo of her own voice answered. Her cell phone was still in her pocket, miracle of miracles. She took it out and flipped it open. Of course, no signal.

She could hardly see through the driving sleet and eerie murk, but she could just make out a path up ahead. Maybe a dirt road. Is that where Jillian had gone? Carly scrambled up and found a gravel lane, wide enough for a vehicle if hers wasn’t still idling on the side of the highway. She could see the glow of headlights shining off in the distance. Hopefully, someone would come along and stop. With her luck, they’d steal it and not report it to the police, though.

From here she saw something glowing softly against the black pearl of the sky—lights in a window and a thin streamer of smoke spiraling above the tree tops. A house.

She tried to run, but could only manage a limping trot. Her right leg hurt like hell, but she didn't stop to examine it. After what she’d been through, a lot of things were going to hurt. The sleet bit her cheeks and hands and a cold sweat only added to the shaking that racked her body. Her adrenaline had long since dumped, spurred and drained, but she pushed on as best she could.

The house looked neglected and weathered, but nonetheless solid and dry. Old, it had two stories with picture book gables and pale shutters. The forest fires had skipped the entire area and the trees around it grew full and piney. She took a deep breath, smelling the wood smoke, sensing safety waiting for her.

She climbed three porch steps that felt like a mountain and knocked. Another light came on inside, spilling out from the stained glass panels flanking the entrance. A moment later the door opened and an old man in a flannel shirt and faded cotton pants stood before her.

They stared at one another in shocked silence. Carly, because she’d been half convinced that the unstoppable Freddie Kruger with deformed face and glove of sharp blades would greet her. He because—well she could only imagine what he thought.

Her voice shook and it took several moments before she could stutter out, “I need help.”

The understatement of the year, but she saw comprehension and then dismay on his face. His hair sprouted thick and iron colored from his square head and a long and straight nose made a centering point on features that might have been carved from stone. He stood at a peculiar angle, perched like an ungainly ostrich on spindly legs.

He said, “Come in, come in,” and moved aside for her to enter.

He had a deep voice with a strange, guttural inflection and a hint of an accent she couldn’t place. She didn't care if he spoke Greek, she came in.

The house was a relic from the days before microwaves and tile. Battered wood planks covered the floor of the cavernous room he led her into. A rocking chair teetered soundlessly back and forth in front of a roaring fire—as if someone had just risen from it. In the corner, a pile of blankets had been stacked, but no other furnishings occupied the space. An overhead light cast the barrenness into stark relief.

He ushered her over to the fireplace with an awkward gait and stood her in front of the crackling blaze. Gratefully she absorbed the heat. Overhead, she heard someone walking across a creaky floor and then a door slammed shut.

“I was looking for my friend,” she said between chattering teeth. “Has another woman been here? She has brown hair and she’s about my height?”

He looked at her blankly. “No one’s been here for years.”

Glancing around, that didn't seem hard to believe. “She was in a car accident,” Carly went on, needing to fill the silence. “I think someone ran her off the road. Her car is totaled, out there.” She nodded in the direction of the wreck. The old man watched her with unnerving steadiness. Her relief at finding shelter took on an uncomfortable edge.

“Teenagers?” he barked suddenly. “Was it teenagers done it?”

Carly jumped at his booming voice. “I don’t know.”

“Damn kid down the way,” he growled. “Always causing troubles. Killed my dog, you know.”

He nodded, pale eyes snapping with a sudden rage. Carly cleared her throat, giving the yawning shadows an anxious glance. “Can I use your phone to call the police?” she asked.

He shook his head. “No phone.”

“No phone. Shut it off a few years back.”

No phone? For a few years? She stared at him blankly, dumbfounded. How did someone not have a phone for a few years? He looked back and she saw something dark move in his eyes. A chilling trickle slipped down her spine that had nothing to do with the cold.

Carly pulled out her cell phone again. Still no bars on the display. Somehow she’d known there wouldn’t be. The old man continued to watch her with an intensity that made her want to squirm. For the love of God, what was up with him?

They stared at each other in tense silence and a little voice inside urged her to get the hell out of there an instant before the sound of an engine out front reached her ears.

The old man looked to the door and then back at her. His expression didn't change.

“Maybe that’s the police,” she said.

Wicked After Midnight (Blud) by Dawson, Delilah S.
A Study in Terror by Ellery Queen
The Black History of the White House by Clarence Lusane
Salvajes by Don Winslow
The Jack the Ripper Location Photographs: Dutfield's Yard and the Whitby Collection by Hutchinson, Philip
Losing Him by Jennifer Foor
The Alpha's Mail Order Bride by Jasmine White
Ash to Embers (Courting Shadows) by C.V. Larkin
Z-Volution by Rick Chesler, David Sakmyster
Devouring love by Serafina Daniel
Our partner