A Short History of Chinese Philosophy 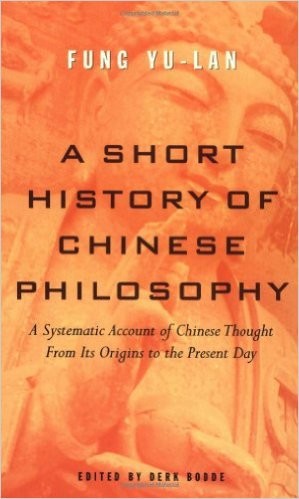 A SHORT history of any subject should not simply be an abridgement of a larger one. It should be a picture complete in itself, rather than a mere inventory of names and "isms.' To achieve this, the author should, as a Chinese expression says, "have the whole history in his mind. Only then can he give the reader an adequate and well-rounded account within his chosen limited scope.

According to Chinese historiography, a good historian must have wide scholarship in order to master all his materials, sound judgment to make proper selection of them, and literary talent in order to tell his story in an interesting way. In writing a short history, intended for a general public, the author certainly has less chance to display his scholarship, but he needs more selective judgment and literary talent than he would for writing a longer and strictly scholarly work.

In preparing this work, I have tried to use my best judgment in selecting what I consider important and relevant from materials which I have mastered. I was very fortunate, however, to have as editor Dr. Derk Bodde, who has used his literary talent to make the style of the book interesting, readable, and comprehensible to the Western reader. He has also made suggestions regarding the selection and arrangement of the material.

Being a short history, this book serves as no more than an introduction to the study of Chinese philosophy. If the reader wishes to know more about the subject, I would refer him to my larger work,
A History of Chinese Philosophy.
The first volume of this has been translated by Dr.

Bodde, and he is now translating the second one; also to my more recent work,
The Spirit of
Chinese Philosophy,
translated by Mr. E. R. Hughes of Oxford University. Both works are mentioned in the bibliography compiled by Dr. Bodde at the end of the present book.

Acknowledgements are due to both Dr. Bodde and Mr.Hughes, from whose books I have borrowed some translations of the Chinese texts appearing herein.

In publishing this book, I welcome the opportunity of expressing my thanks to the Rockefeller Foundation for the grant which made it possible for me to come from China to the University of Pennsylvania as Visiting Professor during the year 1946-47, and which resulted in the writing of this book. Also, I wish to thank my colleagues and students in the Department of Oriental Studies for their cooperation and encouragement, and especially Dr. Bodde, Associate Professor of Chinese. I am likewise grateful to Dr. A. W. Hummel,Chief of the Asiatic Division, Library of Congress, for his encouragement and help in making arrangements for the publication of the book.

1 HE place which philosophy has occupied in Chinese civilization has been comparable to that of religion in other civilizations. In China, philosophy has been every educated person s concern. In the old days, if a man were educated at all, the first education he received was in philosophy. When children went to school, the
Four Books,
which consist of the
Confucian Analects,
the
Book of Mencius,
the
Great Learning,
and the
Doctrine of the Mean,
were the first ones they were taught to read. The
Four
Books
were the most important texts of Neo -Confucianist philosophy. Sometimes when the children were just begining to learn the characters, they were given a sort of textbook to read. This was known as the
Three Characters Classic,
and was so called because each sentence in the book consisted of three characters arranged so that when recited they produced a rhythmic effect, and thus helped the children to memorize them more easily. This book was in reality a primer, and the very first statement in it is that "the nature of man is originally good." This is one of the fundamental ideas of Mencius'

Place of Philosophy in Chinese Civilization

OO2 THE SPIRIT OF CHINESE PHILOSOPHY

whose reflective thinking is systematic. A philosopher must philosophize; that is to say, he must think reflectively on life, and then express his thoughts systematically.

Religion also has something to do with life. In the heart of every great religion there is a philosophy.

In fact, every great religion is a philosophy with a certain amount of superstructure, which consists of superstitions, dogmas, rituals, and institutions. This is what 1 call religion.

If one understands the term religion in this sense, which does not really differ very much from common usage, one sees that Confucianism cannot be considered a religion. People have been accustomed to say that there were three religions in China: Confucianism, Taoism, and Buddhism. But Confucianism, as we have seen, is not a religion. As to Taoism, there is a distinction between Taoism as a philosophy, which is called
Too chia
(the Taoist school), and the Taoist religion
{Too chiao).
Their teachings are not only dif—

OP4 THE SPIRIT OF CHINESE PHILOSOPHY

God is really the universe. Strictly speaking, the love of God in Christianity is not really super-moral.

To answer the above queslions, I would say that the craving for something beyond the present actual world is one of the innate desires of mankind, and the Chinese people are no exception to this rule. They have not had much concern with religion because they have had so much concern with philosophy. They are not religious because they are philosophical. In philosophy they satisfy their craving for what is beyond the present actual world. In philosophy also they have the super-moral values expressed and appreciated, and in living according to philosophy these super-moral values are experienced.

According to the tradition of Chinese philosophy, its function is not the increase of positive knowledge (by positive knowledge I mean information regarding matters of fact), but the elevation of the mind—a reaching out for what is beyond the present actual world, and for the values that are higher than the moral ones. It was said by the
Lao-tzu:
To work on learning is to increase day by day; to work on
Tao
(the Way, the Truth) is to decrease day by day." (See ch. 48.) I am not concerned with the difference between increasing and decreasing, nor do I quite agree with this saying of
Lao-tzu.
I quote it only to show that in the tradition of Chinese philosophy there is a distinction between working on learning and working on
Tao
(the Way). The purpose of the former is what I call the increase of positive knowledge, that of the latter is the elevation of the mind. Philosophy belongs to the latter category.

The view that the function of philosophy, especially metaphysics, is not the increase of positive knowledge, is expounded by the Viennese school in contemporary Western philosophy, though from a different angle and for a different purpose. I do not agree with this school that the function of philosophy is only the clarification of ideas, and that the nature of metaphysics is only a lyric of concepts.

Nevertheless, in their arguments one can see quite clearly that philosophy, especially metaphysics, would become nonsense if it did attempt to give information regarding matters of fact.

Religion does give information in regard to matters of fact. But the information given by religion is not in harmony with that given by science. So in the West there has been the conflict between religion and science. Where science advances, religion retreats; and the authority of religion recedes before the advancement of science. The traditionalists regretted this fact and pitied the people who had become irreligious, considering them as having degenerated. They ought indeed to be pitied, if, besides religion, they had no

OO8 THE SPIRIT OF CHINESE PHILOSOPHY

other access to the higher values. When people get rid of religion and have no substitute, they also lose the higher values. They have to confine themselves to mundane affairs and have nothing to do with the spiritual ones. Fortunately, however, besides religion there is philosophy,which provides man with an access to the higher values—an access which is more direct than that provided by religion, because in philosophy, in order to be acquainted with the higher values, man need not take the roundabout way provided by prayers and rituals. The higher values with which man has become acquainted through philosophy are even purer than those acquired through religion, because they are not mixed with imagination and superstition. In the world of the future, man will have philosophy in the place of religion. This is consistent with Chinese tradition. It is not necessary that man should be religious, but it is necessary that he should be philosophical. When he is philosophical, he has the very best of the blessings of religion.

Problem and Spirit of Chinese Philosophy

Sweet Spot (Summer Rush #1) by Cheryl Douglas
A Billionaire’s Way Of Saying I Want You by McDonnell, Holly
Captive but Forbidden by Lynn Raye Harris
How To Host a Seduction by Jeanie London
Cat's Claw by Susan Wittig Albert
Things That Go Bump in the Night IV by Raine, Ashleigh, Wilder, J. C., O'Clare, Lorie
Small Gods by Terry Pratchett
The Traveller by John Katzenbach
Face the Music: A Life Exposed by Stanley, Paul
The Charlemagne Pursuit by Steve Berry
Our partner