A Simple Case of Angels 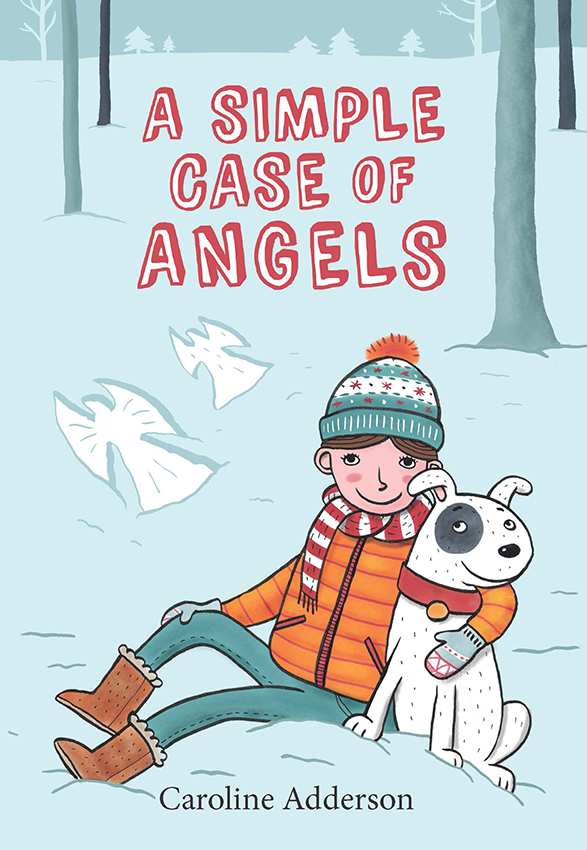 A SIMPLE CASE
OF ANGELS

This book is for Mickey.

Thank you to Shelley, Sheila and Jackie â the three angels who helped this book come to be.

All rights reserved. No part of this publication may be reproduced or
transmitted in any form or by any means, electronic or mechanical, including
photocopying, recording, or any information storage and retrieval system, without
permission in writing from the publisher.

Distribution of this electronic edition via the Internet or any other means
without the permission of the publisher is illegal. Please do not participate in electronic
piracy of copyrighted material; purchase only authorized electronic editions. We appreciate
your support of the author's rights.

We acknowledge for their financial support of our publishing program the Canada Council for the Arts, the Government of Canada through the Canada Book Fund (CBF) and the Ontario Arts Council.

What must
have happened was this. Sometime Â­during summer holidays, the ground the school stood on, the playground surrounding it, and the soccer field, too â

Not a lot. Just enough that the queen's picture in the front entrance of Queen Elizabeth Elementary School hung crookedly, the crown askew on Her Majesty's head. Just enough, too, that in September, when most of last year's grade fours were moving to their new grade-five classroom, someone dropped a water bottle and it rolled the entire unscuffed summer-polished length of the hall.

Nicola Bream's friend Mackenzie Stewart changed classes. Nicola hadn't seen her for two months because the Stewarts spent every summer at their cottage.

“See you at recess!” Mackenzie called to Nicola.

“I got something!” Nicola called back. “You'll be really surprised! I can't wait to show you!”

Nicola stayed in her old desk in her old classroom with her old teacher, Ms. Phibbs, and a half-dozen other kids from last year. Mostly boys, some of them awful, like Gavin Heinrichs. Soon the new grade fives joined them, kids who had changed schools.

Then, to Nicola's dismay, the rest of the desks filled up with little children. Last year's grade threes.

At recess Nicola couldn't find Mackenzie. When she couldn't find her at lunch, she sat alone at a picnic table drawing pictures of her dog, June Bug.

June Bug was the surprise she'd mentioned to Mackenzie.

Every time Nicola set down a pencil crayonÂ â white, black, whiteÂ â it rolled off the end of the picnic table and onto the ground.

Because the picnic table, like the picture of the queen and the school named after the queen, had tilted.

Something else was different that fall. There were hardly any birds. Though it was too early for them to migrate south for the winter, they seemed to be gone already, taking with them their cheerful songs. The few times Nicola spotted a lone sparrow sitting tongue-tied in a bush with its feathers all puffed up, it always looked in a very bad mood.

After just a week of grade five, Nicola could say the same about Ms. Phibbs. Last year she'd been so nice, but this year she was short-tempered and counted spelling.

And her brothersÂ â awful! Nicola fought with them more and more, mostly over June Bug. Between Mackenzie acting like she didn't even know Nicola now, and Ms. Phibbs taking off so many marks because Nicola could never sort out
there
from
their
and
they're
, and her brothers being so mean, life would have been unbearable. If not for June Bug.

June Bug was still a puppy, but so smart. She understood words and did tricks and even made up her own games. Like grabbing hold of the end of the toilet-paper roll and running through the house unspooling it. When the Breams moved the toilet paper onto the windowsill, out of reach, June Bug invented a new game. She figured out how to step on the little pedal on the bathroom wastebasket to make the lid flip up. Then she would dig inside and throw the garbage around. All kinds of awful, embarrassing stuff ended up all over the floor, like snotty tissues and cotton swabs all yellow with earwax.

After that the Breams kept the bathroom door closed.

The second week of school, Nicola's big brother did something he'd never done before. Jared brought home a girl. Her name was Julie Walters-Chen, and she smelled of shampoo and wore ironed jeans.

Clothes-and-hair girls were not interesting to Nicola. Every morning she put on whatever she found in her dresser. Her hair hung in a messy braid down her back. Her mother, Mina, complained it looked like an old rope that had been enthusiastically chewed. Which it had.

But Jared was interested in Julie Walters-Chen. Nicola could tell by the way he twitched around her, like his arms and legs were attached to strings. Also he blushed a lot, which masked his pimples.

Jared and Julie went straight to his room to listen to music.

“Leave the door open,” Mina called. She was working from home that day.

To Nicola, Mina said, “I don't want Jared closing himself in there with a girl.”

She checked Jared's door, then tiptoed back to the den to report to her mother that it was hardly even open, only a crack.

June Bug, meanwhile, had pulled one of Nicola's mother's bras out of the laundry hamper and was trotting down the hall with it. The little dog wanted someone to chase her.

As soon as she saw Julie, June Bug jumped up on the bed and tried to kiss her. Which was when Jared, his back to Julie, turned on the music.

Whenever June Bug heard Jared's rap, she went Â­berserk. She barked at the vacuum the same way, and the hairdryer. When anything electric made a noise, June Bug had to make a louder noise.

One moment Julie Walters-Chen was sitting on the edge of Jared's bed smoothing her long, perfect hair. The next, a dirty bra lay in her lap and a strange dog was licking her face. Then came the crazy barking.

It was too much. Shrieking and flapping her hands in fright, Julie bolted from Jared's bedroom and right out of the house.

“Julie!” Jared called after her. “Come back!”

Jared swung around to face Nicola. “Either that dog goes or I do!” He pointed at little June Bug wagging at his feet.

And right then, right as he shouted that? June Bug peed on the floor.

Nicola thought that showed how smart her dog was.

Jared said go, so she went.

Other strange
things happened, too. During the first few weeks of school not one but
several
kids fell off the playground equipment at Queen Elizabeth Elementary. Nicola, stuck inside during recess correcting her spelling, happened to see some of these falls.

Nicola didn't mind staying in. There was nothing to do at recess now anyway.

Last year Nicola and Mackenzie Stewart had made up games, like ABC Gum World. They saved their Already Been Chewed gum and brought it to school in baggies. At recess and lunch they snuck away to a private corner of the schoolyard behind a smooth-barked tree. There they rechewed the gum to soften it, then shaped it into animals and people. They stuck their creations on the treeÂ â a whole pink and purple Already Been Chewed Gum World they invented stories about.

Nicola remembered this while gazing out the classroom window and not correcting her spelling. The window looked over the playground. Lost in thought, she barely noticed from the corner of her eye what fell. A kid in a green jacket. He'd climbed all the way to the top of the jungle gym, then tried to stand. Arms windmilling, he plunged.

A playground monitor rushed over to check on the fallen boy. At just that moment, a kid at the top of the slide lost his balance, too, and fell. Then another.

It was so strange, children dropping like apples out of a tree. Nicola almost laughed.

The next day the school board sent out an inspector who wound every fun thing in the playground with yellow tape. The principal, Mrs. Dicky, announced over the intercom that there had been some seismic activity in the area.

“What's that?” asked Lindsay Feeler, a new girl with short brown hair and pink-framed glasses who sat next to Nicola this year instead of Mackenzie.

Ms. Phibbs shushed her. Last year Ms. Phibbs had welcomed questions that deepened their understanding of the world. This year she said they talked too much.

Jared, of course, blamed June Bug for driving away Julie Walters-Chen. He hated June Bug for it. But when he came in the door, June Bug still rushed to greet him and wag all around him.

Her little brother, Jackson, who was in kindergarten, imitated everything Jared said and did. He would chant, “Go to hell! Go to hell!” to the poor little dog, who wagged excitedly, not realizing he was saying something mean.

When their father, Terence, heard Jackson say, “Go to hell,” and found out that Jared had taught him, he lost his temper, which didn't happen very often.

“You watch your language, young man!” he yelled at Jared, who stormed off to his room and slammed the door. Jackson got a time-out, too, for saying a bad word.

“June Bug should get a time-out!” he wailed. “She ate my Ferrari!”

“The wheels!” He ran and got it, another disabled Matchbox car.

Terence said, “Time out, June Bug! Nicola, put her in your room. You, too, Jackson! Go to your room!”

Nicola went with June Bug. Together they lay on the bed. June Bug chewed Nicola's long braid, while Jackson tantrummed through the wall. He was still bawling when their mother came home from work.

She heard her father's reply. His exact words. They froze her blood.

“It's not working out with that dog.”

Smile and be a Villain by Jeanne M. Dams
Dog Days of Summer by P. J. Fiala
Dark Valentine by Jennifer Fulton
Shattered Sun (The Sentinel Trilogy Book 3) by Michael Wallace
First Contact - Intergalactic Stories by Bane Bond
The Exhibitionist (The Submissive #6) by Tara Sue Me
Dimiter by William Peter Blatty
The Lost Island by Douglas Preston
Waking Up to Love by Evan Purcell
Bearded Dragon by Liz Stafford
Our partner