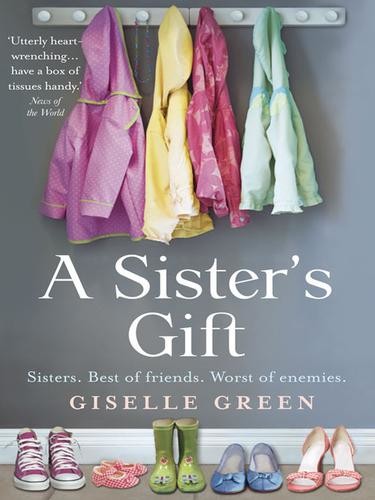 By the same Author

Points for discussion on A Sisiter’s Gift

The first person I’d like to say a big ‘thanks’ to is the artist who drew the picture of the Old Rochester Bridge which inspired the use of our rich local history in the setting for this novel. Deepest appreciation goes to Oliver Green – you’re one talented guy!

Next, many thanks to Jane and also to Eric at the Bridgewarden’s Trust, for being so generous with your time and showing me around the Bridge chambers and answering my many questions. The story is of course completely fictional, but I hope I’ve captured something of the ‘feel’ of the Bridge Trust’s ancient building and also some of the romance of the surrounding city of historic Rochester.

To the bridge engineer Graham Madden who patiently answered my many emails on a ‘theoretically’ broken bridge, my grateful thanks also. Any errors of course are completely down to me.

On the editing front thanks once again to Maxine Hitchcock, who as always did a superb job and to the other girls at Avon editorial. Grateful thanks too, to my agent Dot for your time and encouragement – you know I always much appreciate our chats!

Special mention must go to some of my writing friends too, for their delightful company when we’ve been away together to write – Jan Sprenger and Kate Harrison in particular for their helpful thoughts when I got stuck.

And to my family as always, for allowing me the time and space to write, especially my husband Eliott who first made the observation which I had not, that ‘this is your first romantic book’.

‘Just make a wish,’ he’s urging. ‘Wish for your heart’s deepest desire. Write them down, ladies, on the tags.’

He winks at the small group of us gathered in front of him, tugging at the bunch of red helium balloons in his hand. ‘All proceeds to charity.’ The man’s smile broadens as one of the American tourists fishes out her camera. ‘All wishes are guaranteed so – as they say, ladies – be careful what you wish for!’

The women giggle as one of them utters a comment under her breath.

Click
, and there he is, his pasty face immortalised forever against the steep backdrop of Rochester Castle, the blue-grey September sky behind him, the flaps of the white marquee to his left fluttering in the breeze.

Oh, there is something I wish for, all right. I have wished it for such a long time that I no longer remember a time when I didn’t. When I was a kid, racing my doll’s pram along the length of the Esplanade, I expected it. As a teenager, romantic and moody, wishing on the first ‘star light, star bright’, I was certain that one day what I hoped for would be mine – when I was ready.

But these days I’m not so sure.

I pull my jacket about my shoulders, feeling hope stiffen in a small rigid space inside me. Any time now I expect to be hearing and then I’ll know…

‘Hey you.’ His eyes brighten for an instant, homing in on me. ‘You’re Scarlett’s sister, aren’t you?’

I nod, suddenly uncomfortable. I can’t remember his name.

‘Haven’t seen Scarlett around here for a while.’ He jumps down off his podium, rounding on me.

‘No.’ I shake my head, glancing behind me at the steps that will lead me out of here.

‘She’s blonde,’ I put in, but that’s understating it. Scarlett has a mane of blonde curls that cascade about her heart-shaped face, giving her an appearance that is nothing short of angelic. I, however, have a dark, neat bob that stays put no matter how much the wind gusts. Scarlett always said it gives me the air of a woman who is in total control, organised and efficient.

‘I didn’t mean that,’ he mutters darkly. ‘I meant – you strike me as someone who takes life a bit more seriously.’

I need to be getting back to work…

‘Not stopping to make a wish, Hollie?’ And at the mention of my name, his own comes surging back on a floodtide of memories. I didn’t realise at first that it was him. ‘Come on. There must be something you want.’

‘You sure?’ Duncan waves a tag at me enticingly. ‘It’s for charity.’

‘I bought one earlier,’ I put him off.

‘What a coincidence.’ His smile is thin, unconvinced. ‘So did I.’ He glances up at his bunch of ready-tagged balloons and they’re straining in the breeze.
‘My
wish relates to your sister, actually!’

‘She finished with you, didn’t she?’ She
dumped
you, I think cruelly. ‘Nearly two years ago.’

If he asks I’ll say I don’t know where she’s gone. I thought he’d moved away. I thought we wouldn’t be seeing him around here any more. That feeling of unease is working its way right through my belly.

‘The thing is, Hollie.’ He leans in closer for an instant. ‘Your sister owes me, see? We had an agreement and she ducked out of her end of it. And you can’t just
do
that.’ He frowns. ‘It isn’t right, is it? That’s why I need to speak to her.’ His voice is slow and laboured now, almost imploring. ‘If we can sort out our differences like grown-ups then I won’t feel the need to talk to anyone else about what she did.’

‘Oh, give over,’ I mutter, annoyed. He’s making the hairs stand up on the back of my neck but I’m not going to let him know that he’s affecting me. ‘She didn’t do anything.’

His pale eyes look both piggy and sentimental at the same time.

‘She did, Hollie. And she has to make reparation for it.’

Creep. I stick my hands in my pockets and turn away from him. Even if she did do something that’s got him miffed, I think, what’s he going to do?

‘She’s not around,’ I throw at him as I back away. The wind chases the brown leaves along the square path round and round in circles. When I glance over at the old castle retaining wall there are no flowers to add vibrancy to the summer beds along the Esplanade and the river looks slow and grey. My little sister hasn’t been around for an awfully long time. I’m not sure she’ll ever come back. He’s left it too late. A tall girl steps between us now, her baby bump clearly visible beneath her thin summer dress.

‘I’ll have one. I’m wishing for a boy.’ She writes out her tag in large rounded lettering. ‘It’s guaranteed, you say?’

Duncan smirks back at her. That girl – she can’t be more than seventeen, surely? A good fifteen years younger than me…

Maybe I’ve left it too late, as well?

If you are thinking and hoping of becoming in the family way and matters not going according to plan, Dr Shandaree’s ‘Help for Ladies’ is at hand. Where delicate matters of producing the desired child/children are concerned, Dr Shandaree has the expertise of twenty years in dealing with ladies of faded hope. Success rates using own eggs are in the hundreds and fees reasonable. Only ladies of the highest quality are used as ‘surrogate mums’ for the carrying of your precious child. Please phone or email Dr Shandaree for all discreet and confidential enquiries on number below or at www.BabyinIndia.com

No. I stare at the picture on Dr Shandaree’s enclosed leaflet for a very long time but I can’t bring myself to open her letter. Is it a good sign that she has included the leaflet for her services or not? I finger the leaflet for a while, with its picture of a brown lady in her beautiful orange sari holding a blue-eyed child.

Out there, somewhere on the outskirts of the small Indian city of Surat, there is a whitewashed building where babies can be produced for couples like Richard and me. Couples who are desperate. I picture it, this place, so very far from home; there, under a ferocious blue sky, there will be a gentle doe-eyed lady, attended by a doctor and a nurse in a crisp white uniform, who will carry the child that I long for.

My
child. If I close my eyes I can see him, just as I always
have, plump-fingered and red-cheeked. I will take him for walks every day – even when the wind is blowing – in his little bobbled hat. On sunny days we’ll pause at the ice-cream van and buy cornets with chocolate flakes in them or we’ll run along the Strand watching the paper boats we’ve made as they duck and bob in the water…

Dr Shandaree’s letter feels very light in my hands and I can’t keep my fingers from shaking as I open it. Attached, with one large paperclip, is the wad of medical records I sent Dr Shandaree last month. The results of all the tests I’ve had done over the years…

‘Not looking good, is it?’ Ben Spenlow makes me jump. He’s walked right up the wooden stairs to the office in the Bridge Warden’s chambers and I never even heard him come in.

‘What isn’t?’ Guiltily, I shove Dr Shandaree’s letter under a pile of engineer’s drawings that need to be returned to archive. He
can’t
be talking about BabyinIndia, can he? I straighten. No, of course he isn’t. Ben isn’t in the slightest bit interested in my private concerns. He’s leaning over my desk, peering through the wide bay windows that look out over the Medway and the Old Rochester Bridge, his arms folded tightly over his chest. He indicates with his head and, when I follow the line of his gaze, I spy the desperately long line of traffic that’s snarled up over the bridge.

‘Not good at all,’ he repeats.

‘They haven’t found out what’s wrong with the bridge yet? I thought they said the investigations wouldn’t take more than a couple of weeks?’ My fingers inch the tell-tale edge of the BabyinIndia leaflet further under the pile.

‘They’ve found evidence of an unusual amount of erosion on the riverbed which indicates there
might
be scouring under the piers and abutments.’ He looks over his shoulder. ‘It makes sense to limit the weight of traffic flow till we know if the bridge needs to be closed down altogether.’

I stare at him, jolted out of my own troubles for the moment. Could things really be that bad? I join him at the window. For a brief moment, the sun has come out again. It’s not the deep, dry, burning sun shown on the leaflet but the winking, teasing, in-and-out, early autumn sun in England.

‘That traffic is backed all the way up to Star Hill,’ Ben admits miserably. ‘And it won’t help the situation one jot if we have to shut it all down.’

The faint honk-honk of impatient drivers is louder than it was a moment ago and my heart sinks. Am I going to have to put up with this for weeks yet?

Ben turns to me. ‘Did you manage to get hold of the chief structural engineer at Crossings Constructions for me?’

Crap. I didn’t. That’s so
not like me
, to forget about something so important. I colour, brazening myself to find some excuse for not having done it but—

‘Good grief! What in heaven’s name is that?’ Ben is peering over the top of his thin-framed round glasses. ‘It looks like a…a…’