Read A Song in the Daylight Online

A Song in the Daylight 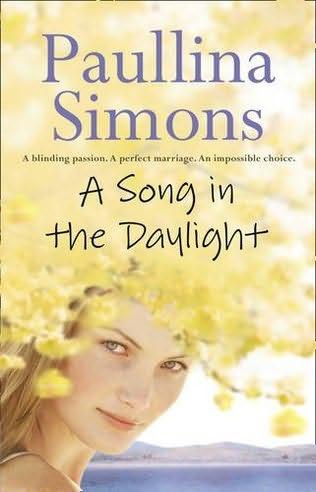 A Song in the
Daylight

To Sara Belk, a mother, a thespian, a theologian,
a friend, a woman extraordinaire

Part I - The Stonemason

Part III - Everything Must Go

“Y
es, it’s mainly desert lands, nothing but dry creeks,” Doug was saying, relaying to Jared his torrid experience in the Australian bush, “but when it rains five hundred miles away, you get an astonishing twenty feet of water pouring through the arid lake beds and salty playas. Doesn’t happen very often, though, the deluge. And even when it does, it quickly evaporates. The stasis is earth, waterless and scorched.”

“Hmm,” Jared muttered, impatient fingers tapping on the desk. He wanted to get back to their conversation about the Yankees’ middle relief pitching. But Doug had recently come back from a trip to the Australian outback and for weeks straight had insisted on telling Jared
all
about it.

Jared had had a busy afternoon of capitalization meetings before the long Memorial Day weekend, and at 3:30, his assistant, Sheila, said that Emily had called and needed him to call back
right away
. He was going to do that but he got swamped with a Tokyo call, an emergency round-up about a possible bankruptcy filing for one of their affiliates, a Hong Kong call, and finally the usual Friday-night banter from Doug, when at 4:45 the phone rang again.

“Oh, sorry, Em. I’m snowed under. What’s up?” He motioned Doug not to leave; he had one more thing to add to their revolving argument on the dire pitching prospects for the Yankees’ sinking (stinking) season.

“What’s
up
,” Emily said with all stridency, “is I have a volleyball game today at five and Mom is not home to drive me!”

“Volleyball game
when
?” Jared’s hand with the index finger out was still raised.

“In fifteen minutes,” said Emily, apparently through her teeth. “And did I mention Mom’s not home to drive me?”

“I’m sure Mommy will be right back, Em. Isn’t Michelangelo with her?”

“I thought he was, but Tara just brought him home.”

“Apparently he had a playdate with Jen and Jess. So here we
all
are, except for Mom—who’s not here. I don’t know if I’ve mentioned it, but I have a MEET in fifteen minutes!”

Jared’s finger was still up for Doug,
just one minute
. “Call her cell.”

“Dad, what do you think, I didn’t call her five thousand times before I called you? And then Asher helpfully found her cell phone ringing on her makeup table in the bedroom.”

“She didn’t take her cell phone?” Jared put his finger down, and stared at his desk, instead of at the casually sitting Doug Grant.

“Well, how far could she have gone?” Jared said. “You know Mommy never carries any cash on her.”

“All right.” He shook his head. “I’m leaving right now. I’ll be home in thirty minutes.”

“Can’t you call a friend on the team? Have another mom drive you?”

“Or wait for me. I can’t blink myself home, Emily. Either you wait for me, or you call someone else.” Jared didn’t know any of his daughter’s friends by name. “I’m sure your mom will be right back.”

“Back from where? Both her cars are in the drive!” With a massive harrumph on the other end, Emily slammed down the TALK button on the cordless phone.

Jared got up. “Sorry, Douglas. We’ll finish this another time.”

“Oh, it’s fine.” He sighed. “Melodrama. Teenagers. Everything has to be done on
their
time.” He was throwing his news papers away as he talked; he stuffed his laptop into his leather bag, plus three annual reports in case he had time to work over the three-day weekend. “Larissa’s not home to drive Emily to the game so, you know, major crisis.”

“Can’t wait for my lovely girls to become cranky teenagers,” said Doug. He had two toddlers.

“Listen, I don’t want you to have the last word. But I’m telling you, the Yankees are doomed without middle rotation pitching. When you’re over on Monday for the barbecue, I’ll explain it all more thoroughly. You can bring dessert.” Jared grinned. “And bathing suits for Kate and the girls. We’re firing up the pool.”

“I’d love to, mate,” said Doug with an Aussie flourish in his New Jersey twang. “You know I like nothing more than to hammer home why you’re deluded about the Yanks. They’re getting old! They have too many injuries! They can’t hit! But
I can’t do it. The wife and I are going away for the weekend. Our fifth anniversary.” Doug raised his eyebrows. “Atlantic City.”

“Ah. Well.” Jared nodded. “Good for you. Stay away from the tables.”

“Don’t worry, Kate will keep me straight. She hates to gamble. I’ll be lucky if I get an hour for blackjack. By the way, I’ve noticed that Jan, our troubled little deputy secretary, is much better lately. What’d you say to her? She’s sober every day, seems like. Nice work.”

Jared shrugged. That last, successful chat with Jan had been months ago. But he couldn’t talk about it now; he had to run.

They shook hands, wished each other a fine weekend. Jared said he would see Doug bright and early on Tuesday morning.

Forty-five traffic-y and frustrating minutes later he walked into his house. Emily had missed her game and was sitting at the kitchen table crying. Asher was in the den watching TV and Michelangelo was coloring on the floor near the dog. As Jared looked closer, he saw his younger son wasn’t coloring near the dog, he was coloring
the
dog. Taking the markers (were these even washable?) away from the boy, he patted Emily’s back.

She bucked away from his hand like a wild horse. “Don’t touch me! Where’s Mom?”

“You should’ve called me back, Dad. I called you so many times.”

“I was at work. I was busy.” Jared felt a stab of guilt. He
was
at work, and he was busy part of the time, but really, he could’ve called back an hour earlier, and didn’t. Larissa took care of home things; he never had to worry.

He called Maggie. “She’s not with me, Jared,” said Maggie. “I haven’t seen her since Tuesday. Maybe with Bo? Evelyn?
Or call my husband. He’s working late tonight. Researching materialism or immortality or something. On a Friday night, too.” She scoffed mildly. “Maybe she’s at the theater.
Saint Joan
opens next week. They’re rehearsing every day.”

“Materialism and immortality, they’re not one and the same?” Jared said jokingly before hanging up.

“Nah, I haven’t seen your wife, man,” said Ezra when Jared reached him. “She didn’t come in today for rehearsals. Which is disturbing since not only do we open next Thursday but we finally did the run-through without the epilogue, as she expressly wanted, and she wasn’t even here for it. What be up?”

“Yeah, with someone who has a car.”

“Weird,” said Ezra. “But I did have lunch with her two days ago, and though she was pretty chill, have you noticed your wife’s lost a
ton
of weight?”

“You think?” Jared had lost interest in the conversation. “She keeps denying it.”

“Oh, yes. Who are you going to believe, me or your lying eyes, she says.” Ezra grunted. “Hey, listen, Lar and Maggie are doing a beer run tomorrow to get ready for the party Monday, but are we still on for tomorrow night?”

“Like I said, she’s melted away.” Ezra chuckled. “She’s disappeared before our very eyes.”

“Till tomorrow, dude. She can’t have lost
that
much weight.”

Jared called Bo, who hadn’t spoken to Larissa since the week before.

Evelyn finally picked up. “I’m bathing all five kids at once, Jared,” she said. “I can’t leave them for long. What’s up?” She hadn’t heard from Larissa since her birthday dinner the month before. This surprised Jared. Larissa always made an effort to keep in touch with Evelyn, her college friend.

The kids were hungry. Jared ordered pizza from Nina’s, then sat in the kitchen with them while they ate. For some reason he didn’t feel like eating. Finally he went upstairs to get changed, put on shorts, a T-shirt; he opened the bathroom, he opened her closet. Everything was neat, orderly, put away. On the bed were seven of his white shirts, still in sheaths of dry cleaner plastic; according to the ticket, picked up for him by her just this morning. The house was quiet. He looked inside Larissa’s closet again. Peculiarly, he looked inside her jewelry box. What was he looking for? She had many beautiful things. He ambled around the bedroom. Bed was made, patted down, hospital-cornered; clothes were in the closet; shoes in their boxes; books on the shelves. Diamond earrings he gave her for their fifteenth wedding anniversary, which she loved and never went anywhere special without. Everything was in its place.

How small of all that human hearts endure,
That part which laws or kings can cause or cure
.

O
ne sunny afternoon, on the dot of 12:45, from west to the east, after all the leaves had gone and the ground was frozen, into the concrete well of the Summit train station a shiny, stainless, steel-and-blue locomotive rolled in, the doors opened, and a smatter of people alighted.

Train tracks run through Summit, wind through it like the everflowing Passaic River. The station itself is brick and mortar, well kept, maintained by well-to-do people in a well-to-do town. You buy your ticket in a little office with white sash windows and red flowers on the sills, where a woman who wanted to retire ten years ago glares at you from behind the glass and her glasses as she sullenly sells you a one-way to Venice or a round trip to visit your lonely mother in Piermont.

To get to the train, you have to walk down forty concrete steps to the embankment where the train arrives and swishes open its doors for a few minutes. Neither the train nor the tracks can be seen from the road. Clearly this was the intent of the designers. Perhaps so that traffic wouldn’t crawl to a stop in a town of twenty thousand people every twenty minutes. But another reason could be that the train tracks, unlike a river, were not deemed by the architects and engineers to be
aesthetically pleasing enough and were deliberately hidden below the cobblestoned street, remaining invisible to the town except for a small white-and-black RR sign on Maple Street, pointing
that
way. You could live your whole life in Summit, New Jersey, and not ever know your town had a train station that took people away—and brought people in.

And yet it did bring people in, every day, and this day also.