Read A Song of Sixpence Online

A Song of Sixpence 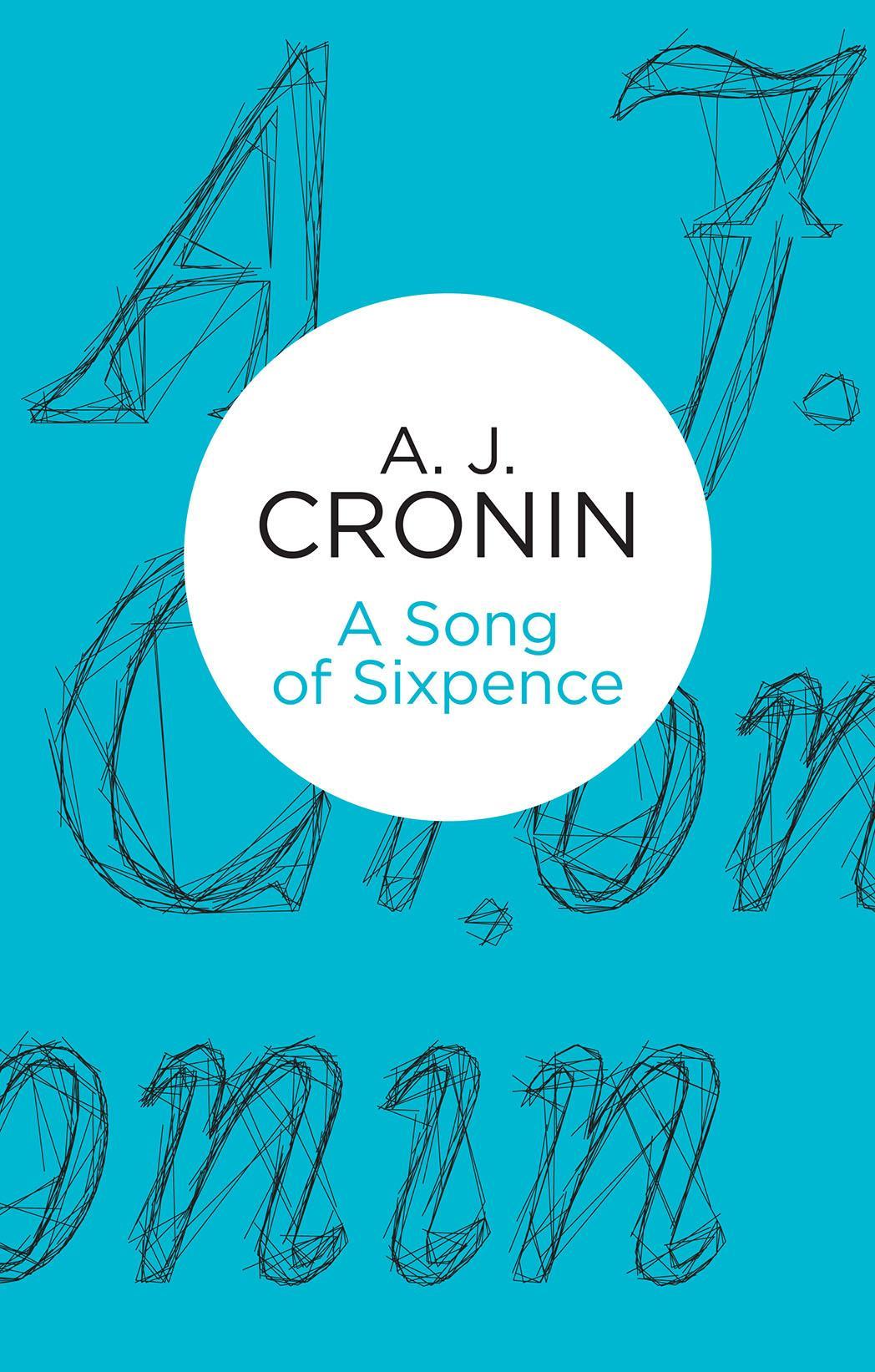 Born in Cardross, Scotland, A. J. Cronin studied at the University of Glasgow. In 1916 he served as a surgeon sub-lieutenant in the Royal Navy Volunteers Reserve, and at the war's end he completed his medical studies and practiced in South Wales. He was later appointed to the Ministry of Mines, studying the medical problems of the mining industry. He moved to London and built up a successful practice in the West End. In 1931 he published his first book,
Hatter's Castle
, which was compared with the work of Dickens, Hardy and Balzac, winning him critical acclaim. Other books by A. J. Cronin include:
The Stars Look Down
,
The Citadel
,
Three Loves
,
The Green Years
,
Beyond This Place
, and
The Keys of the Kingdom
.

Every evening at six o'clock a sense of expectancy filled the house, brightening the long, vague and dreamy afternoon. As I went into the front room my mother, moving about the kitchen preparing our supper, began to sing. It was something about a miller's daughter who lay down and died. She sang these sad Scottish songs in so lively a manner and with such natural cheerfulness they sounded gay. I stood on the hassock to look out of the window. Although I was to go to school next week I still had need of the hassock.

The road to the village station was empty except for Macintosh's dog, asleep in the shade of the sycamore tree outside the smithy. Beyond the station with its beds of sweet william and yellow calceolarias lay the wide sweep of the deserted shore; and beyond that the Clyde estuary, enlivened at present by a white-funnelled paddle steamer, a Broomielaw boat, going downstream. Presently a figure appeared, not the expected one but still a friendâindeed my only friend, Maggie, or as she was called most unjustly by the âbad' boys. Mad Maggie, a big awkward girl of thirteen who, festooned with milk cans from Snoddie's farm, was now squeezing through the bars of the shut gates of the level crossing. This was a short cut so strictly forbidden me I watched reprovingly as she dragged up the road on the start of her evening milk round. Passing our house, one of four little villas primly in a row, she saw me at the window and, with a dull clank of cans, waved an arm in greeting.

I had begun to wave back when there came a shrill whistle. My eyes, diverted from Maggie, picked up a plume of steam beneath which a dark maroon serpent snaked slowly round the curve of the railway line. Painfully, as though out of breath, it puffed to the single platform. In the year 1900 only the slowest North British trains stopped at Ardencaple village.

As sometimes happened, my father was the only passenger to get off. He walked briskly, with the step of a man who likes to get home, an alert figure, conveying, even at that distance, an unmistakable and distinctive sense of style. He was wearing his brown suit, with dark brown shoes, a brown bowler hat with a curled brim, and a short fawn coat. As he drew near, the dog looked up and, being unaware of the prejudices of the village, raised the dust with its tail. Then I saw, with increased anticipation, that Father was carrying a parcel. Quite often when visiting customers in Winton he would bring home to mother and me something for supper that rarely failed to excite us: perhaps a bunch of choice Colmar grapes, or a cut of Tay salmon, or even a jar of Canton green ginger, exotics which seemed to indicate that Father was himself not averse to having good things to eat and which, of course, went so far beyond the modest standards of our daily life that, unveiling them casually with one eyebrow critically raised, he secretly enjoyed our startled looks.

The door clicked open and Mother, plucking off her apron, ran to meet and hug him, an action I did not altogether approve but which unfailingly took place. Father took off his coat and put it on a hangerâhe was always careful of his clothesâthen came into the kitchen, lifted me up in a detached manner and set me down again. Mother put the soup on the table. It was Scotch broth, a dish Father particularly liked but of which, unless pressed, I would eat only the peas, arranging them first in a circle on the rim of my plate. There was boiled beef to follow. Against the native customâand this was only one of our many failures to conform to the strict usages of the community in which we livedâwe took our main meal at night, since Father, on the move all day, seldom had the opportunity for more than a sandwich. Meanwhile, with an air that I felt to be unusual, even slightly strained, he was slowly unwrapping his parcel.

Mother stopped ladling the broth. She had turned pale.

He looked at her with a smile, affectionate yet ironical, and touched up the ends of his short blond moustache.

âI had the final meeting with Hagemann this afternoon. We've signed our agreement. He's taking the boat back to Holland tonight.'

âSee for yourself. There's the first sample. Before your eyes.'

He placed a round glass container on the table, sat down calmly, took the soup plate from her unresistant hand and picked up his spoon. I thought that Mother, unbelievably, was going to cry. She sat down weakly. Dimly aware that something terrible, a crisis, had occurred, disturbing the peace of my home, I could not take my eyes off that round glass bottle. It contained a yellowish powder and had a printed label with a red, blue and white flag. With a great effort, Mother handed me my soup.

âBut, Conor,' she said pleadingly. â You're doing so well with Murchison's.'

âYou mean I have done well for
them.
'

âOf course. At the same time, they are such sound people.'

âI have nothing against Murchison's, my dear Gracie, but I'm tired of wearing my boots out selling their flour. I've given them five good years of my life. Mind you, they've been fair with me. In fact old Murchison advised me to take the agency.'

âBut, Conor â¦ we are so comfortable now â¦ and so safe.'

Father raised that single eyebrow, but not on this occasion to present Colmar grapes. This mysterious bottle must surely be a bombshell.

âWe shall never get anywhere by remaining comfortable and safe. Now, do eat something like a good lass, and I'll give you the details later.' He leaned forward and patted her hand.

âI'm too upset.' Mother got up and placed the boiled beef on the table.

Unaware that I had not touched my broth, she removed my plate without scolding me. Father, with his invariable air of aplomb, carved the beef, calmly and elegantly. With his slight figure, his russet hair and warm complexion, his hazel eyes and even white teeth just showing beneath his curled moustache, he was a handsome man. I admired him intensely and was often spellbound by the unpredictable and daring audacities he would bring off without turning a hair. But in the full meaning of the word I did not love him. I belonged entirely to my mother. Soft, timid, kept back by a chain of illnesses that began with mumps and ended with diphtheriaâI could still taste the carbolic glycerine Dr Duthie had used to paint my throatâand forced by the remarkable circumstances of our life into ties with Mother and my home that were especially close and emotional, I fully merited that deplorable epithet, a mother's boy. Yet who would not have been with such a mother, at that time not more than twenty-four, rather short and soft in figure, with regular features, soft brown hair, eyes of a deep gentian blue, and in all her movements a kind of natural grace which, to my childish mind, seemed to explain her name. But above all, it was her look of sweetness that held me captive.

Now, with her chin cupped in her hand, she was listening to Father, who alone was doing justice to the beef.

âYou must admit,' he was saying reasonably. â The mustard, thank you dear â¦ that I could not miss this chance. We are on the eve of a revolution in the baking industry. The old-fashioned barm method is on its way o-u-t, out.' When Father wished to be impressive he would often spell a word before he said it.

âBut, Conor, the bread we get is perfectly good.'

âYou don't know how often I've seen barm go sour. Bubbling out of the casks. And a whole batch of loaves completely spoiled. Ruined. After all, it's only distiller's scum. The new process will make cheaper and better bread. And it won't go wrong. Think of the opportunity, Grace, with my established connections. Why, I know every baker in the West. I'll be the first in the field. And working for myself.'

Mother was being persuaded.

âYou're quite sure of Mr Hagemann?'

Father nodded with his mouth full.

âHe's straight as a die. I can import from him in Rotterdam on most favourable terms. Besides, he's advanced half the money to give me a start. Would he if he didn't believe in me?'

A faint gleam of reassurance appeared in Mother's eye succeeded by a remote look of expectancy. When supper was over she did not rise to clear the table. Nor did Father follow his usual habit of devoting half an hour to meâan elastic period often extended by my importunitiesâbefore I went to bed. Beyond the short stroll he occasionally took before retiring, Father never went out at night. After a long day spent in the society of men who were his friends he seemed perfectly content to be, as he put it, at his own fireside. Besides, there was no inducement for him to go out. Though he had bare acquaintances, he had never sought, let alone made, a friend in the village. Ardencaple was for him, indeed for all of us, a hostile camp.

Heart of the Demon by Cynthia Garner
La espada oscura by Kevin J. Anderson
The Sociopath Next Door by Martha Stout PhD
Salt Sugar Fat by Michael Moss
The Runaway Bride by Noelle Marchand
The Art of Sin by Alexandrea Weis
The Last Thing He Wanted by Joan Didion
Bad Hair Day by Carrie Harris
Man and Wife by Tony Parsons
Comeback by Dick Francis
Our partner