Read A Soul for Vengeance Online

A Soul for Vengeance 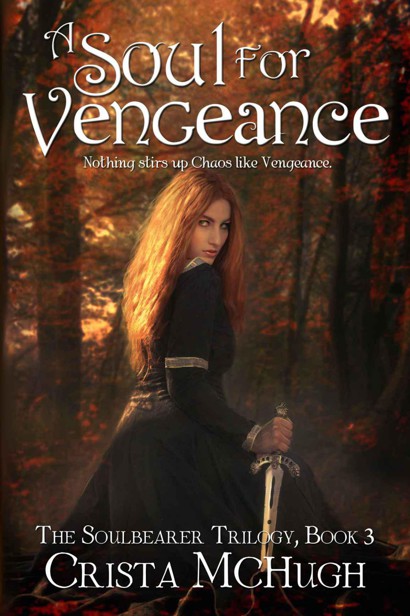 A Soul For Vengeance

Book 3 of the Soulbearer Trilogy

A Soul For Vengeance

All rights reserved. This book or any portion thereof may not be reproduced or used in any manner whatsoever without the express written permission of the author or publisher except for the use of brief quotations in critical articles or reviews.

This is a work of fiction. Names, places, businesses, characters and incidents are either the product of the author's imagination or are used in a fictitious manner. Any resemblance to actual persons living or dead, actual events or locales is purely coincidental.

Kell dangled the mirror in front of him, the light from his lamp flashing on the smooth surface with each rotation as it swayed in time with the rocking of the ship. Arden had given it to him three weeks ago so he could talk to her whenever he wanted, but as much as he missed her, he hadn’t used it. Perhaps it was because the pain of her rejection was too fresh. Perhaps it was because the pendant was magic, something that had been forbidden to him for as long as he could remember. Either way, he wasn’t ready to see her face or hear her voice just yet.

The pendant stopped twirling and began to glow with a light brighter than any lamp he’d ever seen. When it faded, Arden’s face filled the mirror. “Kell, are you there?”

His breath caught.
I’m not ready for this
.

But a deeper part of him yearned to hold her again, even if it was just an image of her on a magical amulet. He traced the rim of the mirror, causing another blaze of light, and was rewarded with her smile. In a kingdom where most of the people had dark hair and eyes, Arden’s golden hair and bright blue eyes reminded him of a sunny day. Before he’d left Gravaria, just the mere sight of her would lift his mood. Now, it only reminded him of what he’d lost.

His voice was raw and rough when he replied, “Hello, Arden.”

Her smile widened. “It’s so good to see you. I’ve missed you.”

The words stabbed his chest as deeply as the dagger he’d taken for her a month ago. But with each flutter of his heart, his pain lessened and his hope grew. “You’ve missed me, eh? Enough to want to come home?”

Those brilliant blue eyes that had always held him captive dimmed, and her smile vanished. “I wish I could. The Empress still has me under arrest.”

Dev called Arden “Trouble,” and Kell understood why. The woman had a knack for leveling whole sections of cities. The last episode had occurred when Arden had allowed the chaos god inside her, Loku, to take control of her body and fight his nemesis, the God of Law, Nelos. The resulting battle caused a massive cave-in underneath the Imperial Palace and city of Queembra. It also may have led to the death of Nelos, something that still rattled his beliefs. In Ranello, there was only one deity—the Lady Moon—but since he’d met Arden, he’d been exposed to all kinds of truths he never imagined existed.

He scanned the scene behind her. Dark wood shelves lined the walls, each stuffed full of books and scrolls. “You don’t appear to be in the palace anymore.”

“No, the Empress moved me back to the Conclave. She said I would be
safer
here. What she really meant is that it would be easier to imprison me here.” The green ring around her irises flashed, a constant reminder of Loku’s presence inside her that still made his insides squirm. “They’ve cast some sort of magical barrier here that prevents me from leaving the Conclave’s borders.”

“And what does Dev think of all this?” He may have lost Arden to the elven knight, but he still respected Dev’s dedication to his role as Arden’s Protector.

“I don’t know. He hardly speaks to me these days.” Her voice grew low and quiet, tinged with a note of sadness that made Kell want to both comfort her and rattle some sense into the stubborn elf. Didn’t Dev realize he had the one thing Kell desired above anything else?

“Should I turn the ship around and plead to the Empress on your behalf?”

She shook her head. “If the rumors I’m hearing are true, Ranello needs you far more than I do.”

Kell gritted his teeth. He’d heard the rumors, too. Thallus, the country to the north, was preparing to invade Ranello. Some reports mentioned that they’d already crossed the border into his homeland. As the Third Prince of Ranello, it was his duty to protect his people from any attackers and fight alongside his father. “Have you heard anything new?”

She shook her head again, her face pinched with worry. “They refuse to tell me anything. Loku says it’s because they don’t want me to break free of their prison and go home. But I do know there’s been a flurry of letters lately between the Empress and the Mage Primus, and Dev supposedly is going before the Mage’s Council tomorrow to discuss something very important. Perhaps he’ll convince them to let me go home and do what I can to help you.”

Kell bit back a bitter laugh. He seriously doubted that. Dev made it very clear from the start his goal was to keep Arden and the crazed chaos god inside her safely locked away in Gravaria. Besides, as great an asset as Arden’s magical powers could be in defending Ranello, he knew she’d live in constant danger of being killed by her own people for being a witch. Until he could change the Ranellians’ perception of magic, she was still in danger. “You stay where you are for now. If I see there’s any truth to the rumors, I’ll let you know immediately.”

He closed his eyes and drew in a slow, deep breath. Yes, she worried about him. She’d even told him she loved him, but not in the way he wanted her to. He wanted her to be his wife, but her heart already belonged to Dev. The ache in his chest intensified until he released the air trapped in his lungs. “I’ll be fine,” he said more to himself than to her.

When he opened his eyes, he found himself staring back at his reflection. Arden had vanished.

He closed his fist around the mirror. Traces of the magic still lingered on the surface, tingling up his arm. The thing he’d always been told to fear comforted him now, as familiar as his favorite sword. He’d seen what magic could do—both the good and the terrible—and it needed a place within Ranello.

When he unwrapped his fingers from the pendant, he saw nothing out of the ordinary about it. No glowing. No flashes of light. Just a simple round mirror with a knotted design carved into the gold along the back. He draped the chain it hung from around his neck and tucked the mirror underneath his shirt, the metal cold against his chest. Then he dimmed his lamp and stretched out on his bed. Boznac was only a few days away, if his calculations where correct, and he needed to rest as much as possible before the ship docked. He’d have little time for sleep once he was home if there was any truth to the rumors.

A boom, followed by a loud crack jolted him from his slumber. The ship lurched to the side, no longer gently rolling with the waves. Screams came from the deck above. Another boom rattled the walls. It didn’t take Kell long to realize what was happening.

His ship was being attacked.

He slid his feet into his boots and grabbed his sword, not bothering to wear more than the leather breeches and linen shirt he’d fallen asleep in. The acidic smell of smoke and cannon powder greeted him when he opened the door. Water rushed in from the hole in the far side of the hull. Sailors dashed past him toward the stairs leading to the main deck, their faces pale and tight.

Kell nudged his way to the top and froze, his mouth going dry. A ship flying the Thallian flag had pulled alongside his. Men poured over its railings and swung from its masts onto the deck in front of him, their weapons drawn.

Suddenly, the rumors were real.

Kell raised his sword and went after the first Thallian he encountered. They exchanged blows. The ship tilted to the side, and he jumped at the distraction to sink his sword into the Thallian’s gut. The man fell to his knees, and Kell moved onto the next attacker. His ship was sinking fast, and the only hope he and his crew had of getting back to Boznac was to overtake the Thallian ship.

Another Thallian fell victim to his sword, then another. Kell hacked his way through his attackers, but they kept coming. His pulse pounded through his veins as he kept swinging his blade, dodging strikes and blocking blows until he could seize upon an opportunity to mortally wound his opponent. When he reached the railing, he didn’t hesitate to jump on board the Thallian ship and drive toward the wheel. Once he gained control of it, the ship would be his.

Something cold sliced along his side.

The hot sting of pain followed, driving the air from his lungs.

Then something hard collided with the top of his skull, and blackness consumed him.

Zara stretched out her hand, signaling for the men behind her to get ready as their boat glided through the still, moonlit waters. They’d waited weeks for the perfect night to launch their attack. She offered a quick prayer to the Lady Moon the first part of their plan had already gone into place without a hitch. If not, then she and her men were in for a fight.

The submerged paddles drew to a stop as the men powering them ceased pedaling in order to draw their weapons. Zara peeked out from under the tarp that concealed them from the Thallian soldiers and gave the last steering instructions to Parros, who sat on the opposite end of the small boat. Their hull scraped against the prison ship in Boznac’s harbor and inched closer to the rope ladder that dangled from the deck above.

Zara grabbed it and threw back the tarp, not missing Parros’s disapproving frown just before she started climbing, her fitted leather breeches allowing her to move with greater stealth than the bulky skirts she’d been forced to wear before the invasion. Let him think what he wanted. She was the leader of this mission, and that meant she’d go first.

All six of them climbed up the deck with the silence of the dead. The same silence greeted them when they surveyed the surroundings. Parros leaned in close to her and murmured, “Keep your guard up, m’lady. We both know how tricky those Thallians can be.”

The knotted scar across her abdomen burned, despite the icy cold of the winter’s night. She loaded her crossbow. “I’m never in danger of forgetting that.”

Bodies littered the deck. Two of her men fanned out, creeping toward each crumpled mass and nudging them with their boots before reaching down to check for a breath or a pulse. After they’d inspected each one, they circled back to her. “All dead.”