Read A Stairway to Paradise Online

A Stairway to Paradise 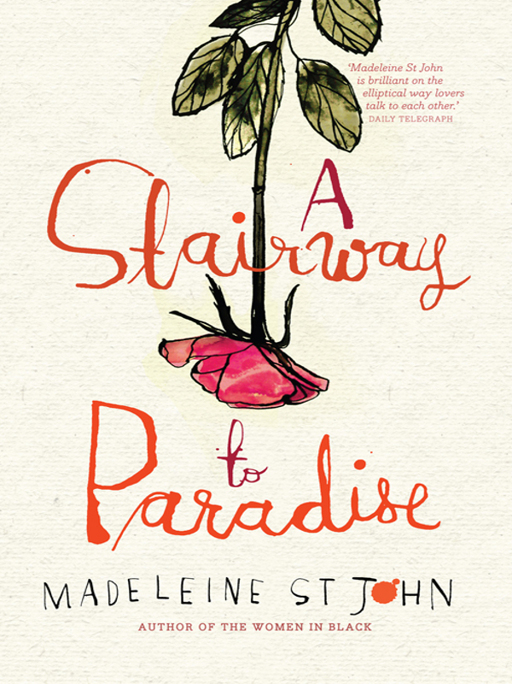 PRAISE FOR
The Women in Black

‘A knock-out—ironic, sharp, alive, and then you’re stopped
in your tracks by the warmth of her insights. Australia
as we suddenly remember it…’
JOAN LONDON

‘A major minor masterpiece, a witty and poignant snapshot of
Sydney the year before yesterday.’
BARRY HUMPHRIES

‘This book is like the perfect, vintage little black dress.
It’s beautifully constructed, it evokes another time while
being mysteriously classic and up-to-date, and it makes
you feel happy. I love it.’
KAZ COOKE

‘In
The Women in Black
, Madeleine St John evoked the collision of
modern European history and the still-awakening Australian culture
with an economical intensity that no other writer has quite matched.
The reader could start with any page of her brilliantly compressed
dialogue and realise straight away that this is the work
of an exceptional writer.’
CLIVE JAMES

‘A delicious book. Funny and happy, it’s like
the breath of youth again.’
JANE GARDAM

‘An exquisite novel that has been lost to us for far too long—you’ll
find yourself re-reading it every time you need to be reminded that, in
Camus’ words: Happiness, too, is inevitable.’
DEBORAH ROBERTSON

Madeleine St John was born in Sydney. She graduated from Sydney University in 1963 and lived in London for most of the succeeding years, until her death in 2006. Her novels include
The Women in Black
, 1993,
A Pure Clear Light
, 1996, and
The Essence of the Thing
, 1997, which was shortlisted for the Booker Prize.
A Stairway to Paradise
is her fourth novel.

A
Stairway
to
Paradise

The paper used in this book is manufactured only from wood grown in sustainable
regrowth forests.

Copyright © Madeleine St John 1999
The moral right of the author has been asserted.

All characters in this publication are fictitious and any resemblance to real persons
,
living
or dead
,
is purely coincidental.

First published in Great Britain in 1999 by Fourth Estate Limited
This edition published by The Text Publishing Company, 2010

Cover and text design by W. H. Chong
Cover illustration by H. B. Swann
Typeset in 12.5/18.75 Granjon by Midland Typesetters
Printed and bound by Griffin Press

This project has been assisted by the Commonwealth Government
through the Australia Council, its arts funding and advisory body.

Barbara for some reason insisted on sitting in the back, so she got in first, ducking past the front passenger seat and then thumping herself down; and sitting there, arrayed, with her large bag—what the hell was she carrying around?—beside her: great, she said. This is just great.

And then the two men got in, Andrew sitting where she ought to have sat, his long legs hunched up uncomfortably, but half-turned around to face Barbara, as if politely not wishing to have his back towards her, because he was well, he was
impeccably
, brought up, was Andrew: Andrew’s manners were sometimes enough to bring tears to your eyes.

So he was sitting there in the front passenger seat, half-turned towards big velvety Barbara in the back, when Alex got in behind the wheel, even more hunched up than Andrew.

‘This your vehicle, is it, sir?’ said Barbara to the back of Alex’s head.

She knew perfectly well that it was actually Claire’s weeny run-around: but Andrew didn’t know that she knew, because Andrew knew, precisely,
rien
.

Alex simply grunted and turned on the ignition. But then he paused a moment. ‘Who’s first?’ he said.

‘I suppose it had better be you,’ said Alex.

‘My sentiments entirely,’ said Barbara. ‘Rev her up then, gov.’

Alex, silent, let out the clutch and drove off.

Barbara knew that silence. Barbara knew the exact meaning of the present set of that neck, the tension it harboured, the quality of the explosion to come. Ah well, she thought. Not my
problème
. She waited until they were crossing Battersea Bridge before she spoke again. ‘Is there by any chance a sound system in this motor?’ she asked.

‘Oh, well,’ said Barbara airily. ‘Never mind.’ And she began to sing an old Gershwin number about love being blind.

And so it went on, through Chelsea, South Ken, the Park, Paddington, and so on, northwards—you know the route—all the way to bloody Belsize Park: a good big intolerable slice of the George Gershwin songbook.

Andrew’s long legs were half asleep by the time they reached Barbara’s house; stiff with cramp he got out of the car and waited for Barbara and her big bag to emerge.

‘Well,’ she exclaimed. ‘Here we are indeed! I won’t ask you in—hope you don’t mind. Terribly late.’ She bent over and looked at Alex through the open door: he was sitting rigid, mute, over the wheel, just waiting. ‘Good night, lover,’ she said. ‘Thanks for the ride. I’ll do the same for you sometime. Take care!’ She straightened up: Andrew still stood, waiting to re-enter the car. ‘Good night… er,’ she said. ‘Andrew.’

‘Good night, Barbara,’ he stuttered. Oh, God, if I could just ask her for her telephone number—I can’t. Impossible.
Oh, God
. And she’s gone. He got back into the car, demoralised, in a turmoil.

Now they were on their way to Islington, through the bright half-empty two a.m. streets, in silence, each possessed by his own ghostly, ghastly confusion of thought and emotion.

‘You’d better direct me from the Angel,’ said Alex, ‘okay?’

‘Right, right,’ said unhappy Andrew. Here now was the Angel. ‘Right here. Now second left.’ And so it went on. ‘Just past that Volvo.’

Andrew turned to his friend, his old, old friend from Oxford days, whom he hadn’t seen now for ten years. Andrew had just returned from ten years’ teaching in the United States, and his broken American marriage. Sadness and failure, sorrow and grief. And his little American child whom he would now see once a year, for a month in the summer. Failure and grief. Pick up the threads of the old life, the old English life—English life: sweet, sweet rice pudding, lumpy and sweet and deceptively bland: except that it wasn’t there any more, not that sweet, sweet pudding he’d thought he remembered, no, not quite, no, not really: no, not at all. Was it? See the old friends: the dear old friends, their manners deceptively bland, their values deceptively relative, their wits like long sharp needles: except that they too weren’t quite there, any more; they weren’t quite where he thought he remembered their having been. Nothing was as he’d thought it would be; he was just trying, now, to find a place where he could get a foothold, a piece of ground one could actually put one’s foot on, stand on, without going under, the water over one’s head: he’d been back here for, what, three months, and he was still treading water, trying to find the ground under his feet. Alex, now. He, at any rate, was still married to Claire (but now had two children) and still worked in Fleet Street. Which wasn’t in Fleet Street any more.

Alex craned his neck and looked up at the facade of the house. ‘Which bit is you?’ he said. ‘Have you got the first?’

‘The second and third,’ said Andrew. ‘Thought I might as well have two bedrooms. For when Mimi comes over, and so on.’

There was a moment of cold, painful, saddened silence.

‘Won’t you come in for a moment?’ said Andrew ‘If you’re not too shattered.’

Alex hardly liked to refuse, in the circumstances. That cold, painful sadness. ‘Not a bit,’ he said.

There were the two men, hovering about vaguely in Andrew’s brand-new rather empty sitting-room: a battered chesterfield (very expensive), an armchair, a coffee table: the
Eye
, the
Economist
and the
Independent
.

Alex picked up the last by a corner. ‘Oh, you read this thing, do you?’ he said with a wry smile.

‘Well,’ said Andrew. ‘Thought I ought to catch up. It’s new since I went away.’

‘Ye-e-es,’ said Andrew. ‘Everything. And nothing.’ Oh, God, he thought. He was in perpetual pain. But he was brave, brave, brave.

‘Barbara, for example,’ he said.

‘Not very,’ said Alex. ‘Well, new since your day, of course. Technically speaking. Well, perhaps actually speaking too. Yes, very possibly. All right, she’s new. The absolutely modern, the truly contemporary woman. How do you like her?’

Undressed, said Andrew to himself. He almost laughed at the pleasantry; almost laughed with delight at the idea of undressing Barbara and helping himself to what he would then find. Her skin was so smooth, so golden. She had lustrous golden-brown hair. Careful, careful. He was too busy with his thoughts and their concealment to notice his friend’s tone and the perturbation it betrayed; still now he was avoiding Alex’s gaze, filling the electric kettle, getting some mugs from a cupboard in the galley kitchen at one partitioned-off end of the sitting-room. ‘She seems…well…new.’ She’s as new as the dawn. ‘Interesting. She tells me she’s never, ever, had
a proper job
. Remarkable.’

‘It’s just a generational thing,’ said Alex dismissively. ‘Graduate unemployment, and so on.’

‘Oh, ask her,’ said Alex drily. He could bear no more of this.

‘Hardly at all,’ said Alex. ‘She’s more Claire’s—well, friend isn’t
quite
the word, I dare say. They used to see each other a fairish bit, a few years ago. Not so much now I think. Perhaps not at all. I hardly know her.’