Read A Stillness at Appomattox Online

A Stillness at Appomattox 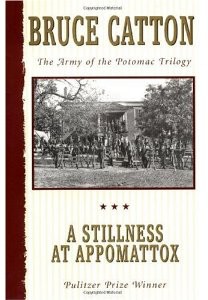 SUMMARY:
If every historian wrote like Bruce Catton, no one would read fiction. This marvelously well-told account of the final year of the Civil War marches readers from Wilderness, through Petersburg, and finally to the climax at Appomattox. The surrender scene, when Grant and Lee meet at last, is spine tingling. This is the third book of Catton's Army of the Potomac trilogy. It's also the best of the bunch, even though the first two, Mr. Lincoln's Army and Glory Road, are both exceptional. Not to be missed. --John Miller
SUMMARY:
An historical account of the final year of the Civil War and the surrender at Appomattox

A Stillness at Appomattox

Glory Is Out of Date

One More River to Cross

White Iron on the Anvil

Away, You Rolling River

Glory Is
Out
of Date

Everybody
agreed that the Washington's Birthday ball was the most brilliant event of the winter. Unlike most social functions in this army camp by the Rapidan, it was not held in a tent. There was a special, weatherproof ballroom—a big box of a building more than a hundred feet long, whose construction had kept scores of enlisted men busy. Some of these had been sent into the woods to fell trees. Others had taken over and operated an abandoned sawmill, to reduce the trees to boards. Still others, carpenters in some former incarnation, had taken these boards and built the building itself, and it was pleasantly odorous of new-cut pine, decorated with all of the headquarters and regimental flags which the II Army Corps possessed. The flags may have been worth seeing. It was the boast of this corps that although it had suffered nearly 19,000 battle casualties it had never yet lost a flag to the enemy.

At one end of the ballroom there was a raised platform on which, to dazzle the guests, there was an idyllic representation of what the ladies from Washington might imagine to be a typical army bivouac—spotless shelter tents pulled tight to eliminate wrinkles, piles of drums and bugles, tripods of stacked muskets, mimi
c campfire with cooking kettles
hung over it, and as a final touch two brass Napoleons, polished and shining until their own gun crews would hardly know them, reflecting the light of Chinese lanterns, as brightly festive as any instruments of pain and death one could hope to see.

Some of the guests—the wives of officers who had enough rank or influence to be attended by their womenfolk while in winter quarters—were more or less permanent residents of this highly impermanent camp. Others, who had come down from the capital by train just for this occasion, were quartered in wall tents, and since a woman in a hoop-skirted party gown could neither ride horseback nor walk on the muddy footways of an army camp, their escorts called for them in white-topped army ambulances.

The escorts were of course officers, both of staff and of line. They wore their dress uniforms, and they had their swords neatly hooked up at their belts, and even though they were to spend the evening dancing many of them wore spurs. It was remarked that both escorts and guests seemed to make a particular effort to be gay, as if perhaps the music and the laughter and the stylized embrace of the dance might help everybody to put out of mind the knowledge that in the campaign which would begin in the spring a considerable percentage of these officers would unquestionably be killed.

That knowledge was not easy to avoid. The war was just finishing its third year, the end of it was nowhere in sight, and what lay ahead was almost certain to be worse than what had gone before. Neither the officers who wore spurs and swords to the dance floor, nor the women who swirled their voluminous skirts to the music without regard for these encumbrances, retained any romantic illusions about this war. Yet they still had the ability—perhaps there was a necessity about it—to create illusions for the moment; and this evening there seems to have been a conscious effort to enter into the Byronic mood, an eagerness to see a parallel between this ball and the fabulous ball given in Brussels by the Duchess of Richmond on the eve of Waterloo. The dancers tried to act the parts which the romantic tradition called for, and while the music lasted—the brave music of a military band, playing the swinging little tunes that would keep reality at bay— they could maintain their chosen attitudes, changing tragedy into a dreamy unobtrusive melancholy that would do no more than highlight the evening's gaiety. It was at one of these dances that a young woman found herself chatting with a general officer whose only son had recently been killed in some outpost skirmish up the river. She offered her sympathy. The general bowed: "Yes, madame, very sad! Very sad! He was the last of his race. Do you waltz?"
1

The dance lasted until the small hours, and at last the ambulances went off through the sleeping camp, and there was a final tinkle of chatter and laughter and so-glad-you-could-come under the frosty stars as the guests went to their tents. And the next afternoon everybody reassembled in and around a reviewing stand in an open field for a grand review of the II Corps, with the commanding general of the Army of the Potomac taking the salute as the long ranks of veterans went past.

Like the dance, the review was an occasion: a quiet reminder, if anybody needed one, that dances and bright officers and everything else rested finally on the men in the ranks, who went to no parties and who could be turned out to parade their strength for the admiration of the officers' ladies. It was noted that the major general commanding, George Gordon Meade, was in rare good humor. He was lean and grizzled, with a great hawk nose and a furious temper, and his staff had learned to read omens in his behavior. When the army was about to do something he gave off sparks, and those around him did well to step quietly and rapidly, but today the omens were good. He was light
-
hearted, making small jokes and telling stories, enjoying the review and the company of the guests, and acting the part of a major general who had nothing in particular on his mind. Staff observed and took heart; some weeks of quiet must lie ahead of the army.
2

In this judgment the staff officers were wrong. There was a movement afoot, and General Meade did not wholly approve of it. He was at ease, perhaps, merely because the imminent movement would involve only a fragment of the army, and because it did not seem likely to have any great importance one way or the other. Visible sign that something was in the wind was the presence at this infantry review of the
3rd
Cavalry Division of the Army of the Potomac, led by Brigadier General Judson Kilpatrick.

Kilpatrick was in his mid-twenties, young for a brigadier, a wiry, restless, undersized man with blank eyes, a lantern jaw, and an imposing growth of sand-colored sideburns; a man about whom there were two opinions. A member of Meade's staff wrote in his diary that it was hard to look at Kilpatrick without laughing, and the common nickname for him around army headquarters was "Kill Cavalry." His division fought well and paraded well—at this review it put on a noble mock charge, a thundering yelling gallop across the dead grass of the plain, troopers rising in their stirrups with gleaming sabers extended, all very stimulating for the visiting ladies—but its camp was usually poorly policed and in bad order, its horses were overworked and badly groomed, the clothing and equipments of the men had a used-up look, and its carbines were mostly rather dirty.

Yet the man had a quality, somehow. In combat he was valiant, and he was afraid of nothing—except, possibly, of the final ounce of the weight of personal responsibility—and he was slightly unusual among the officers of this army in that he neither drank nor played cards. At West Point he had been noted as a gamecock, anxious to use his spurs. Born in New Jersey, he was ardent for the Union and against slavery, and he had had many fist fights with other gamecock cadets from the South. William Tecumseh Sherman, with his genius for brutal overstatement, may have summed him up when, a bit later in the war, he asked to have Kilpatrick assigned to him for the march to the sea, explaining: "I know that Kilpatrick is a hell of a damned fool, but I want just that sort of man to command my cavalry on this expedition."

Kilpatrick had ambitions. It was his belief that if he survived the war he would
become, first, governor of New
Jersey, and then President of the United States. At the moment, however, he was more concerned with the thought that he would presently become a major general, and various events hung upon this conviction.
8

While the officers of the II Corps were having their ball, Kilpatrick had been having a party of his own—a lavish affair, held in a big frame house near Brandy Station, where Kilpatrick had his headquarters. The guests included a number of important senators—the Senate had to confirm the promotions of all general officers—and if the general did not drink he saw to it that any guests who did were taken care of. The party appears to have been loud, merry, and successful. One guest recalled that Kilpatrick had been "as active as a flea, and almost as ubiquitous." When the review was held on the following day Kilpatrick, who had arranged to have his cavalry take part, saw to it that his guests had places in the reviewing stand.
4

The Tulip Eaters by Antoinette van Heugten
Abandoning the Rules by Grace, Jp
Prince William by Penny Junor
Bridge to a Distant Star by Carolyn Williford
Stark Naked by Desiree Holt
The Sex Education of M.E. by L. B. Dunbar
Neither Five Nor Three (Helen Macinnes) by Helen Macinnes
Thirty Four Minutes DEAD by Kaye, Steve Hammond
Holly's Christmas Kiss by Alison May
The Last Honest Seamstress by Gina Robinson
Our partner