Read A Stone & a Spear Online

A Stone & a Spear 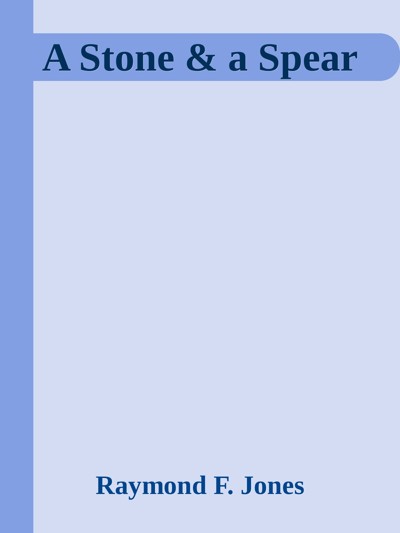 A Stone and a Spear by
Raymond F. Jones

FROM Frederick to Baltimore, the rolling Maryland countryside lay under a fresh blanket of green. Wholly unaware of the summer glory, Dr. Curtis Johnson drove swiftly on the undulating highway, stirring clouds of dust and dried grasses.

Beside him, his wife, Louise, held her blowing hair away from her face and laughed into the warm air. "Dr. Dell isn't going to run away. Besides, you said we could call this a weekend vacation as well as a business trip."

Curt glanced at the speedometer and eased the pressure on the pedal. He grinned. "Wool-gathering again."

"I was just wondering who said it first — one of the fellows at Detrick, or that Lieutenant at Bikini, or—"

"Said what? What are you talking about?"

Louise's smile grew tight and thin. "Don't any of you ever think of anything but the next war — any of you?"

"How can we? We're fighting it right now."

"You make it sound so hopeless."

"That's what Dell said in the days just before he quit. He said we didn't have to stay at Detrick producing the toxins and aerosols that will destroy millions of lives. But he never showed us how we could quit — and be sure of staying alive. His own walking out was no more than a futile gesture."

"I just can't understand him, Curt. I think he's right in a way, but what brought him to that viewpoint?"

"Hard to tell," Curt said, unconsciously speeding up again. "After the war, when the atomic scientists were publicly examining their consciences, Dell told them to examine their own guts first. That was typical of him then, but soon after, he swung just as strongly pacifist and walked out of Detrick."

"It still seems strange that he abandoned his whole career. The world's foremost biochemist giving up the laboratory for a truck farm!" Louise glanced down at the lunch basket between them. In it were tomatoes that Dr. Hamon Dell had sent along with his invitation to visit him.

FOR nearly a year Dr. Dell had been sending packages of choice fruit and vegetables to his former colleagues, not only at the biological warfare center at Camp Detrick but at the universities and other research centers throughout the country.

"I wish we knew exactly why he asked us to come out," said Louise.

"Nobody claims to have figured him out. They laugh a little at him now. They eat his gifts willingly enough, but consider him slightly off his rocker. He still has all his biological talents, though. I've never seen or tasted vegetables like the ones he grows."

"And the brass at Detrick doesn't think he's gone soft in the head, either," she added much too innocently. "So they ordered you to take advantage of his invitation and try to persuade him to come back."

Curt turned his head so sharply that Louise laughed.

"No, I didn't read any secret, hush-hush papers," she said. "But it's pretty obvious, isn't it, the way you rushed right over to General Hansen after you got the invitation?"

"It is hush-hush, top-secret stuff," said Curt, his eyes once more on the road. "The Army doesn't want it to leak, but they need Dell, need him badly. Anyone knowing bio-war developments would understand. They wanted to send me before. Dell's invitation was the break we needed. I may be the one with sufficient influence to bring him back. I hope so. But • keep it under your permanent and forget your guessing games. There's more to it than you know."

The car passed through a cool, wooded section and Louise leaned back and drank in the beauty of it.

IN THE late afternoon they bypassed the central part of Baltimore and headed north beyond the suburb of Towson toward Dell's truck farm.

YOU ARE WHAT YOU EAT

"Dr. Hamon Dell, world's foremost biochemist — and truck farmer," Curt muttered as he swung the car off the highway.

Louise stepped out when the tires ceased crunching on the gravel lane. She scanned the fields and old woods beyond the ancient but preserved farmhouse. "It's so unearthly."

Curt followed. The song of birds, which had been so noticeable before, seemed strangely muted. The land itself was an alien, faintly greenish hue, a color repulsive to more than just the eyes.

"It must be something in this particular soil," said Curt, "something that gives it that color and produces such wonderful crops. I'll have to remember to ask Dell about it."

They whirled at the sound of an unfamiliar voice. Louise ut tered a startled cry.

The gaunt figure behind them coughed asthmatically and pointed with an arm that seemed composed only of bones and brownish skin, so thin as to be almost translucent.

The figure shambled away and Louise shook herself as if to rid her mind of the vision. "If our grandchildren ever ask about zombies, I can tell them. Who in the world do you suppose he is?"

"Hired man, I suppose. Sounds as if he should be in a lung sanatarium. Funny that Dell would keep him around in that condition."

From somewhere behind the house came the sound of a truck engine. Curt took Louise's arm and led her around the trim, graveled path.

The old farmhouse had been very carefully renovated. Everywhere was evidence of exqusite care, yet the cumulative atmosphere remained uninviting, almost oppressive. Curt told himself it was the utter silence, made even more tense by the lonely chugging of the engine in back, and the incredible harsh color of the soil beneath their feet.

ROUNDING the corner, they came in sight of a massive tank truck. From it a hose led to an underground storage tank and pulsed slowly under the force of the liquid gushing through it. No one was in sight.

"What could that be for?" asked Louise.

"You've got me. Could be gasoline, but Dell hasn't any reason for storing that much here."

They advanced slowly and amazement crept over Curt as he comprehended the massiveness of the machine. The tank was of elliptical cross section, over ten

feet on its major axis. Six double wheels supported the rear; even the front ones were double. In spite of such wide weight distribution, the tires were pressing down the utterly dry ground to a depth of an inch or more.

'They must haul liquid lead in that thing," said Curt.

"It's getting cool. I wish Dell would show up." Louise glanced out over the twenty-acre expanse of truck farm. Thick rows of robust plants covered the area. Tomatoes, carrots, beets, lettuce, and other vegetables — a hundred or so fruit trees were at the far end. Between them ran the road over which the massive truck had apparently entered the farm from the rear.

A heavy step sounded abruptly and Dell's shaggy head appeared from around the end of the truck. His face lighted with pleasure.

"Curt, my boy! And Louise! I thought you weren't going to show up at all."

Curt's hand was almost lost in Dell's enormous grip, but it wasn't because of that that his grip was passive. It was his shocked reaction to Dell's haggard appearance. The fierce eyes looked merely old and tired now. The ageless, leathery hide of Dell's face seemed to have collapsed before some overpowering decay, its bronze smoothness shattered by deep lines that were like tool marks of pain.

Curt spoke in a subdued voice. "It's hard to get away from Detrick. Always one more experiment to try — "

" — And the brass riding you as if they expected you to win another war for them tomorrow afternoon," said Dell. "I remember."

"We wondered about this truck," Louise commented brightly, trying to change the subject. "We finally gave up on it."

"Oh, that. It brings liquid fertilizer to pump into my irrigation water, that's all. No mystery. Let's go on to the house. After you're settled we can catch up on everything and I'll tell you about the things I'm doing here."

"Who's the man we saw?" asked Curt. "He looks as if his health is pretty precarious."

"That's Brown. He came with the place — farmed it for years for my uncle before I inherited it. He could grow a garden on a granite slab. In spite of appearances, he's well enough physically."

"How has your own health been ? You have — changed — since you were at Detrick."

Dell raised a lock of steel-gray hair in his fingers and dismissed the question with a wan smile. "We all wear out sometime," he said. "My turn had to come."

INSIDE, some of the oppressiveness vanished as the evening passed. It was cool enough for lighting the fireplace, and they settled before it after dinner. While they watched the flickering light that whipped the beamed ceiling, Dell entertained them with stories of his neighbors, whose histories he knew clear back to Revolutionary times.

Early, however, Louise excused herself. She knew they would want privacy to thresh out the purposes behind Dell's invitation — and Curt's acceptance.

When she was gone, there was a moment's silence. The logs crackled with shocking pistol shots in the fireplace. The scientist moved to stir the coals and then turned abruptly to Curt.

"When are you going to leave Detrick?"

"When are you coming back?" Curt demanded instead of answering

"So they still want me, even after the things I said when I left."

"You're needed badly. When I told Hansen I was coming down, he said it would be worth five years of my own work to bring you back."

'They want me to produce even deadlier toxins than those I gave them," Dell said viciously. 'They want some that can kill ten million people in four minutes instead of only one million — "

"Any man would go insane if he looked at it that way. It would be the same as gun -makers being tormented by the vision of torn men destroyed by their bullets, the sorrowing families — "

"And why shouldn't the gunmakers be tormented?" Dell's voice was low with controlled hate. "They are men like you and me who give the t^r-makers new tools for their trade."

"Oh, Dell, it's not as simple as that." Curt raised a hand and let it fall wearily. They had been over this so many times before. "Weapon designers are no more responsible than any other agents of society. It's pure neurosis to absorb the whole guilt of wars yet un fought merely because you happened to have developed a potential weapon."

Dell touched the massive dome of his skull. "Here within this brain of mine has been conceived a thing which will probably destroy a billion human lives in the coming years. D. triconus toxin in a suitable aerosol requires only a countable number of molecules in the lungs of a man to kill him. My brain and mine alone is responsible for that vicious, murderous discovery."