Read A Tale of 3 Witches Online 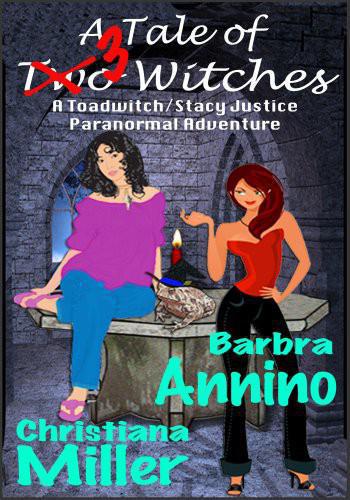 All Rights Are Reserved.

No part of this book may be used or reproduced without written permission,

except in the case of brief quotations embodied in critical articles and reviews.

This e-book is licensed for your personal enjoyment only. This e-book may not be re-sold or given away to other people. If you would like to share this book with another person, please purchase an additional copy for each person you share it with. If you're reading this book and did not purchase it, or it was not purchased for your use, then you should return to site of purchase and purchase your own copy. Thank you for respecting the author's work.

This story is dedicated to the witch in every woman. And to all our readers who've asked for more!

Mara bent to pick up the morning paper and was almost run over by two Dobermans, chasing full tilt after a toad. Technically, the ghost of a toad. The late, great Lord Grundleshanks the Poisonous Toad, to be exact.

Grundleshanks hopped through the open front door and up onto the back of an armchair. Mara picked up the paper she had dropped, grabbed the morning mail, and went into the cottage just in time to see Aramis and Apollo skid into the chair and end up in a pile.

"He's not alive, you goofballs. You won't be able to catch him. You'll just kill me in the process."

The Dobes glanced from her to the toad and back again, eyebrows twitching, as if they were anxiously weighing their odds.

Just then, the telephone rang. Mara picked it up. It was Paul. He had the baby, which she knew always made him nervous. Mara tucked the phone onto her shoulder as she sorted through the mail, pulling out bills that she needed to pay.

"No, Paul. She can't levitate things. She's just a baby." Mara listened. "No, she's not going to telepathically turn off anyone's machine and kill off all the old people. Geez. She's not a monster, Paul. She's a baby. If you can't deal with her, bring her back."

"She's staring at me." He said, his voice low and rumbly, as if he was worried about the baby overhearing him.

"That's what babies do. They can't talk much, so they stare."

"I don't think she's supposed to be able to stare yet."

Mara sighed, exasperated. "Are you staring back at her? Or are you giving her something else to focus on?"

"You say that now," Paul grunted. "But just wait until she reanimates the dead. Then we'll see how normal she is."

He hung up and Mara shook her head. While she had wanted her daughter to spend more time with her dad, this was starting to feel like a bad idea.

Just then, there was a thud at the door. Followed by a muffled, "Let me in, bitch!"

Mara dropped the mail and the paper on the coffee table and hurried to open the door.

Gus, her best friend and cottage mate, stood outside, shivering in the cool fall air, balancing a bag of donuts, a tray of coffee, and a large box. "Took you long enough. My cojones shrivel up any more, I'll be a
castrato
."

Mara rolled her eyes. He was such a diva. "I told you to wear a jacket."

Gus handed her the coffee and donuts, and took a firmer hold on the box.

"Oooh, what's in the box?" she asked. "It's too early for Christmas, and too late for my birthday."

"Not everything is about you, Miss Thing. Where's my little girl?"

"Paul took her to visit Daniel at the assisted living facility. At least, that's the plan. We'll see if they actually make it there."

"Daddy and grandpa bonding time. How sweet." Gus grunted and set the box on the couch. "Does that mean Paul's over the fear that she'll blink and turn him into a flying squirrel?"

"Not really. He's kinda torn between her being his daughter and the possibility that she may be the antichrist. But he's trying."

"He'd better get over it. I don't want him making her think she's evil. If he doesn't shape up, I'll turn into the antichrist and stick his head on a pike." Gus growled. "No one screws with my little princess's self-esteem and lives."

"There's a picture of a high chair on the side of--"

"Oh. I asked the cards. They said there would be strife between them, but it would all end up well."

Gus gave her his rendition of the hairy eyeball.

"Gus, we've got to give him a chance. After all, he is her father."

As far as they could figure out, Paul was technically the little girl's father – technically. But since he had been possessed at the time, Mara wasn't sure she could really hold him accountable for the pregnancy. And Paul wasn't at all sure how much of the little girl's DNA was actually human, regardless of what Mara said. Gus, on the other hand, would happily dump Paul's body in a stream and take over father duty, if Paul so much as looked at the baby cross-eyed. So they all co-existed in a tense balancing act.

Apollo and Aramis, ever on the lookout for treats, trotted over when Mara opened the donut box. She gave them each a piece of glazed donut and sat down on the couch, sipping her coffee, while Gus finished sorting through the mail Mara had brought in.

He handed an envelope to Mara. "Here's one from the dead letter department."

It was addressed to Tillie MacDougal.

Aunt Tillie shimmered and appeared in the armchair. Gundleshanks hopped down to sit on her shoulder.

"Well, don't keep me in suspense, child. What does it say?"

Mara opened the envelope and an invitation slid out, along with a handwritten note.

"This looks like fun." Mara said, reading the invitation out loud. "Spend a haunted weekend at The Geraghty Girls Guest House. Tour the most haunted spots in Amethyst and end the weekend with a Halloween festival and parade."

"Sounds like a job offer, Tillie," Gus said, through a mouthful of donut. He looked over Mara's shoulder. "Is it from undead_monster.com?"

Mara laughed. "Now that would be funny. Jobs in the afterlife. Wouldn't that make it hell?"

"Maybe that's where Tillie is. In hell, holding down a job as your spectral nanny."

Mara rolled her eyes. "I don't think so, Gus. And she'd never hurt the baby."

"I'll thank you to keep a civil tongue in your head, young man." Tillie snapped. "Don't let me get started on what you've done--"

"--Would you both hush up and let me read this note?" Mara said, unfolding the note.

Surprisingly, they both quieted down.

Mara squinted at the name, not sure if she was reading it right. "It's from someone named... it looks like Birdie. Is it Birdie or Bridie?"

"It's Birdie. How lovely. I haven't seen Birdie in ages," Tillie said, settling back down. "A personal invitation. Of course, we'll go. I can't wait to see what she's up to."

"But you're not." Tillie said, pointedly. "And you could use a vacation. You said yourself, this trip sounded like fun."

Mara looked up from the note. "Oh, no. No, no, no. Vacations are for single people with no responsibilities. I'm not going to go dragging a baby to a haunted holiday."

"I'm with you, Til. How can anyone pass up a Halloween vacation?" Gus said. "Hey, look at that. Me and Tillie agreeing. Is it getting chilly in hell, Til?"

Mara ignored both of them and read the note.

Gus looked over her shoulder and gave a low whistle. "Wow. And I thought I was the Queen of Melodrama.

"Well? What does it say? Don't keep an old ghost in suspense."

"Dear Tillie," Mara read. "This is crucial, I'm afraid. There's a great trine aligning in the stars and the portents are centering on Amethyst. My granddaughter continues to fight against her destiny. We must have a gathering of elders to meet the challenge ahead. We need you, desperately. I've set aside a room for you at the B&B. Please, hurry."

"Well, that settles it," Tillie said, standing. "Pack your bags."

"Tillie! I don't even know what half of the words in that note mean. I'm not going to drop everything to go on some cryptic journey."

"It means she needs your help. You'll have to leave the baby here."

"I can't do that. And what about the dogs?" Mara protested.

"Figure it out. The clock is ticking."

"This invitation was for you. Not me. I'll just call her and tell her--"

"You are not going to call Birdie and break the news of my demise over the phone. You will do it in person, like a responsible adult. More to the point, she needs you. Consider it an emergency."

Mara looked around, anxious. "But..."

"Isn't that what dads are for? Paul can stay here and watch the baby and the dogs." Gus chimed in. "You wanted them to have bonding time."

"And I'll pop in and out and make sure he takes good care of her." Tillie added.

"That's how emergencies are." Gus said, grinning at Mara. His eyes were twinkling at the prospect of a witchy crisis looming. "Duty calls. Have magical powers, will travel. Witches to the rescue. Hip, hip, hooray. Let's get a move on." He said, practically pushing her towards the stairs so she could pack.

"No more buts. Get that suitor of yours over here and make it happen," Tillie snapped.

Mara groaned. Last time Paul stayed over at the cottage, a malevolent spirit had possessed him. She wasn't at all sure he'd be up for staying there again.

To say the dream was unusual would be putting it mildly. There was a toad hopping all around a pumpkin patch and the thing had such expression in his eyes, Stacy Justice could swear he was Lord Byron reincarnated.

Her Great Dane, Thor, was galloping after the toad, his huge jowls flopping in the fall breeze, until he came across an old woman with a temperament so ornery, it fired off her in tiny purple sparks. Stopped the dog right in his tracks. Thor rolled over on his back and whinnied, kicking his legs in the air. The toad shrugged, climbed on top of Thor's belly and blinked at the woman.

She gave a reluctant smile to the toad, but to Stacy, she said, "You kids think you know everything. Think your brains are better, just because they're younger. You better wise up, toots. I don't have as much patience as your grandmother. Just ask Mara."

Then she was gone.

Stacy bolted upright in bed, jostling Thor, who was snoring next to her, his giant tail thumping happily.

Was she talking to me? And who on Earth was Mara?
Stacy thought.

Stacy's eyes were still heavy as she crawled out of bed. She cursed herself for not making coffee the night before. She would need a whole pot to kick off this weekend. Not only was it the busiest tourist weekend of the year, it was also jam-packed with family activities that she was bound to be dragged to, whether she wanted to go or not.