Read A Thread in the Tangle Online

A Thread in the Tangle 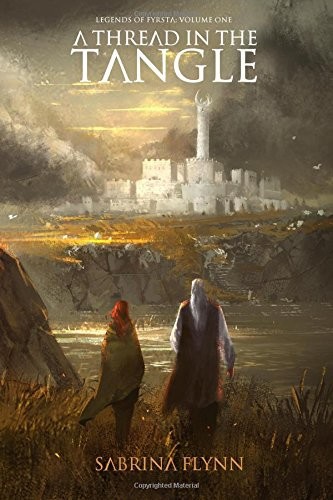 A THREAD IN THE TANGLE is a work of fiction. Names, characters, places, and incidents are either the product of the author’s overactive imagination or are chimerical delusions of a tired mind. Any resemblance to actual persons, living or dead, events, or locales is entirely due to the reader’s wild imagination (that’s you).

Cover art courtesy of the National Gallery of Art:

Acknowledgements for map brushes and images:

To Alice and Merrily, my literary mothers.

“Every story has a beginning; the task is finding it.”—Galvier Longstride

T
IME
IS
FICKLE
, ever changing and flowing, ebbing like the sea.

A vast ocean of moments brushing against the next, rippling beneath waters both turgid and calm.

It slips between our fingers when we wish to hold it, yet moves with sluggish stubbornness when we seek to flee it, riding upon our shoulders like an oppressive yoke.

Time is a burden we cannot escape.

Our lives are swallowed in the cold, dark waters of its unfathomable depths; never to be remembered or recalled, fading like a whisper that never was.

On occasion—a very rare occasion—one moment will brush against the next and a spark will flare to life that refuses to be extinguished.

This is the moment, the spark, and this is how the end begins for a shattered realm—with a small nymphling who was cold.

A
SLEEK MARE
cut through the night, racing over slick cobblestones and twisting roads with a fearlessness that her rider did not share.

The rider clung to his mount’s neck as the northern wind howled its fury against the coastal kingdom of Kambe, penetrating the great bay of Wyrim’s Fist to hurl itself at the walls of Whitemount.

A cold, relentless sleet battered the rider, stinging his beardless cheeks and tugging upon his cloak with a grim purpose that threatened to rip him out of the saddle.

He closed his eyes, huddled against the sure-footed mare, and offered a silent prayer to the Guardians for protection.

It was the Felling Wind; a storm born and brewed in the frigid mountains of the Fell Wastes.

Every man, woman and child had taken shelter—everyone save the rider.

It was certainly not a night to be racing through the decaying dock district in search of a lord who had abandoned his post, but then again, Edmund Flaetfoot hadn’t been given much choice in the matter.

He cursed his luck, the uneven roads and the biting wind, but most of all the fiendish force that had started a fire in the Royal nursery.

Lightning snapped, slicing through the sleet, illuminating a ramshackle pleasure house that rose proudly from the midst of squalor.

Edmund pulled sharply on the reins and the mare skidded to a stop in the mud.

He placed a steady hand on her neck and once she had settled, he tugged his cloak into place, squinting at a sign swaying on its chain.

The faded letters of
The Mermaid’s Blush
were lost to him in the storm, but he knew every twist, turn, lane and alley in Whitemount as surely as he knew his own home, and this gaudy, run-down structure of red paint and gold-flecked balconies was undoubtedly his destination.

As interested as Edmund was in the opposite sex, he would never set foot in so unsavory a place.

So why in the Nine Halls would the Emperor’s Wise One?

Edmund dismounted, bracing against the wind before leading his steed to the mouth of an alley offering a pitiable shelter.

It was not his place to question orders, but as he sprinted up the rickety steps of the
Mermaid’s Blush
, he couldn’t help but wonder if he would find the Emperor’s Wise One here as the Guard Captain had instructed.

Worst of all, he wondered what would happen to him if he failed to locate the esteemed healer.

The common room was nearly empty of patrons, save the truly immobile.

He picked his way past snoring drunkards and equally soused whores while wrinkling his nose at the gaudy decor.

Clearly, some optimistic soul had tried to spruce up the worst of the termite-ridden wood.

A layer of gold paint had been slapped on the walls and then doused with cheap perfume in a futile attempt to mask the underlying stench of sweat, piss and rotting timber.

Edmund stepped into the light of a spluttering candle.

A haggard woman stirred in the corner, studying the young man with small, suspicious eyes.

Her gaze shifted to the young man’s tunic, which boldly displayed the Emperor’s crest: a black sword and two blue crowns emblazoned on a field of silver.

Displeasure and spite creased her face like old leather.

“Our dues are paid,” the woman called across the room.

“Where can I find the Wise One known as Oenghus Saevaldr?”

“Wise One?” the woman snorted.

“Don’t know about all that.

Is the big oaf in trouble again?”

A large, bulky brute with a crooked nose dragged himself out of his chair, planting his feet and crossing his arms to await the hag’s orders.