Read A Time of Exile Online

A Time of Exile 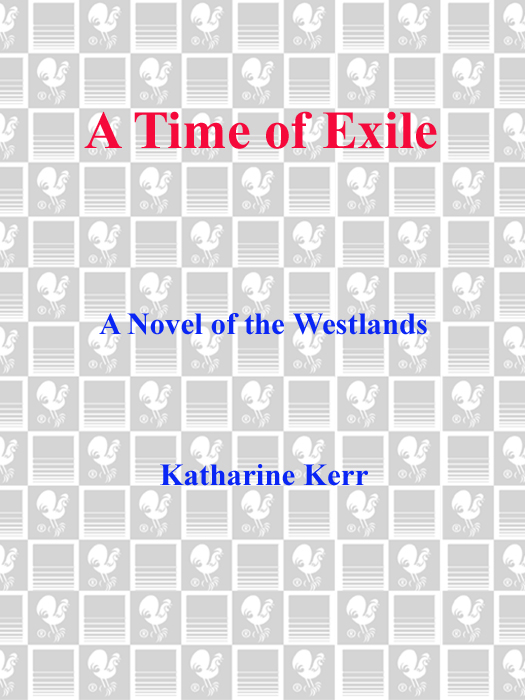 With Odyl there to guard his flank, Danry could turn his head for a look just as a plume of dust began to rise among the trees, and a new set of horns and shouts broke out. The rest of the Deverry army was battling up the other side of the rise. Doubtless they’d merely been trying to hit the rebel army from the rear, but all at once Danry realized that they were getting themselves a splendid prize indeed.

Screaming and cursing, they tried to turn their horses and rally the rest of their men, but the Deverrians were all over them….

“No one does real, live, gritty Celtic fantasy better than Katharine Kerr.”

—Judith Tarr, author of
The Dagger and the Cross

Her novels of Deverry and the Westlands

Part One: Deverry and Eldidd 718

A Special Preview of A Time of Omens

A NOTE ON THE PRONUNCIATION
OF DEVERRY WORDS

The language spoken in Deverry is a member of the P-Celtic family. Although closely related to Welsh, Cornish, and Breton, it is by no means identical to any of these actual languages and should never be taken as such.

Vowels
are divided by Deverry scribes into two classes: noble and common. Nobles have two pronunciations; commons, one.

A as in
father
when long; a shorter version of the same sound, as in
far
, when short.

O as in
bone
when long; as in
pot
when short.

W as the
oo
in
spook
when long; as in
roof
when short.

Y as the
i
in
machine
when long; as the
e
in
butter
when short.

Vowels are generally long in stressed syllables; short in unstressed. Y is the primary exception to this rule. When it appears as the last letter of a word, it is always long whether that syllable is stressed or not.

THE PRONUNCIATION OF DEVERRY WORDS

Diphthongs
generally have one consistent pronunciation.

AE as the
a
in
mane.

AI as in
aisle.

AU as the
ow
in
how.

EO as a combination of
eh
and
oh.

EW as in Welsh, a combination of
eh
and
oo.

IE as in
pier.

OE as the
oy
in
boy.

UI as the North Welsh
wy
, a combination of
oo
and
ee.
Note that OI is never a diphthong, but is two distinct sounds, as in
carnoic
(KAR-noh-ik).

Consonants
are mostly the same as in English, with these exceptions:

C is always hard as in
cat.

G is always hard as in
get.

DD is the voiced
th
as in
thin
or
breathe
, but the voicing is more pronounced than in English. It is opposed to TH, the unvoiced sound as in
th
or
breath.
(This is the sound that the Greeks called the Celtic tau.)

RH is a voiceless R, approximately pronounced as if it were spelled
hr
in Deverry proper. In Eldidd, the sound is fast becoming indistinguishable from R.

DW, GW, and TW are single sounds, as in
Gwendolen
or
twit.

Y is never a consonant.

I before a vowel at the beginning of a word is consonantal, as it is in the plural ending
-ion
, pronounced
yawn.

Accent
is generally on the penultimate syllable, but compound words and place names are often an exception to this rule.

This is, of course, the same system of transcription used in the earlier volumes of these chronicles—a fact that may surprise some few readers. I refer to those scholars of Elvish, as well as one well-known Elvish scholar, who have taken time better employed elsewhere to criticize my decision to dispense with the vast apparatus of diacritical marks with which they attempt to render on paper that most nuanced of languages. No reader of popular fiction wants or needs to wade his or her way through a page where long names bristle with peculiar typefaces like some sort of verbal porcupines. In my approximations I have as before relied upon native speakers of Elvish in difficult or ambiguous cases; I trust that their judgment will eventually carry the day even in academic circles and that this tedious debate in the back pages of various linguistic journals will at last be put to rest.

“A
s thrifty as a dwarf” is a common catchphrase, and one that the Mountain People take for a compliment. Although they see no reason to waste anything, whether it’s a scrap of cloth or the heel of a loaf, they keep a particularly good watch over their gem-stones and metals, though they never tell anyone outside their kin and clan just how they do it. Otho, the silver daggers’ smith down in Dun Mannannan, was no different than any other dwarven craftsman, unless he was perhaps more cautious than most. His usual customer was some hotheaded young lad who’d dishonored himself badly enough to be forced to join the silver daggers, and you have to admit that a wandering swordsman who fights only for coin, not honor, isn’t the sort you can truly trust with either dwarven silver or magical secrets.

During his long years among humans in the kingdom of Deverry, Otho taught a few other smiths how to smelt the rare alloy for the daggers, an extremely complicated process with a number of peculiar steps, such as words to be chanted and hand gestures to be made just so. Otho would
always refuse to answer questions, saying only that if his students wanted the formula to come out right, they could follow his orders, and if they didn’t, they could get out of his forge right then and spare everyone trouble. All the apprentices shut their mouths and stayed; they were bright enough to realize that they were being taught magic of some sort, even if they weren’t being told what the spells accomplished. Once they opened shops of their own, they went on repeating Otho’s procedures in the exact way they’d been taught, so that every dagger made of dwarven silver in Deverry carried two kinds of dweomer.

One spell Otho would acknowledge, especially to someone that he liked and trusted; the other he would have hidden from his own brother. The first produced in the metal itself an antipathy to the auric vibrations of the elven race, so that the dagger glowed brightly the moment an elf came within a few feet of it. The other, the secret spell, was its necessary opposite, producing an affinity, in this case to the dagger’s true owner, so that if lost or stolen, sooner or later the magical currents of the universe would float that dagger home. The thing was, by “true owner” Otho meant himself, which meant that any lost dagger would eventually come home to him, no matter who had actually made it or how much its interim owner had paid for it. Otho justified all of this by thinking of the purchase price as mere rent, a trifling detail that he never mentioned to his customers.

Once and only once had Otho produced an exception, and that was by accident. Round about 1044, he made a dagger for Cullyn of Cerrmor, one of the few human beings he truly admired. In the course of things, that blade passed to Rhodry Maelwaedd, a young lord who was forced by political exile to join the silver daggers. As soon as Rhodry laid his hand on the dagger, it was obvious that his blood was a little rarer than merely noble—the blade blazed up and accused him of being half an elf at least. Grudgingly, and only as a favor for Cullyn of Cerrmor’s daughter, Otho took off the denouncing spell. What Otho didn’t realize, since his dweomer was a thing of rote memory rather than real understanding, was that he’d weakened the complementary magic as well. The dagger now saw Rhodry, not the dwarf, as its one true owner.