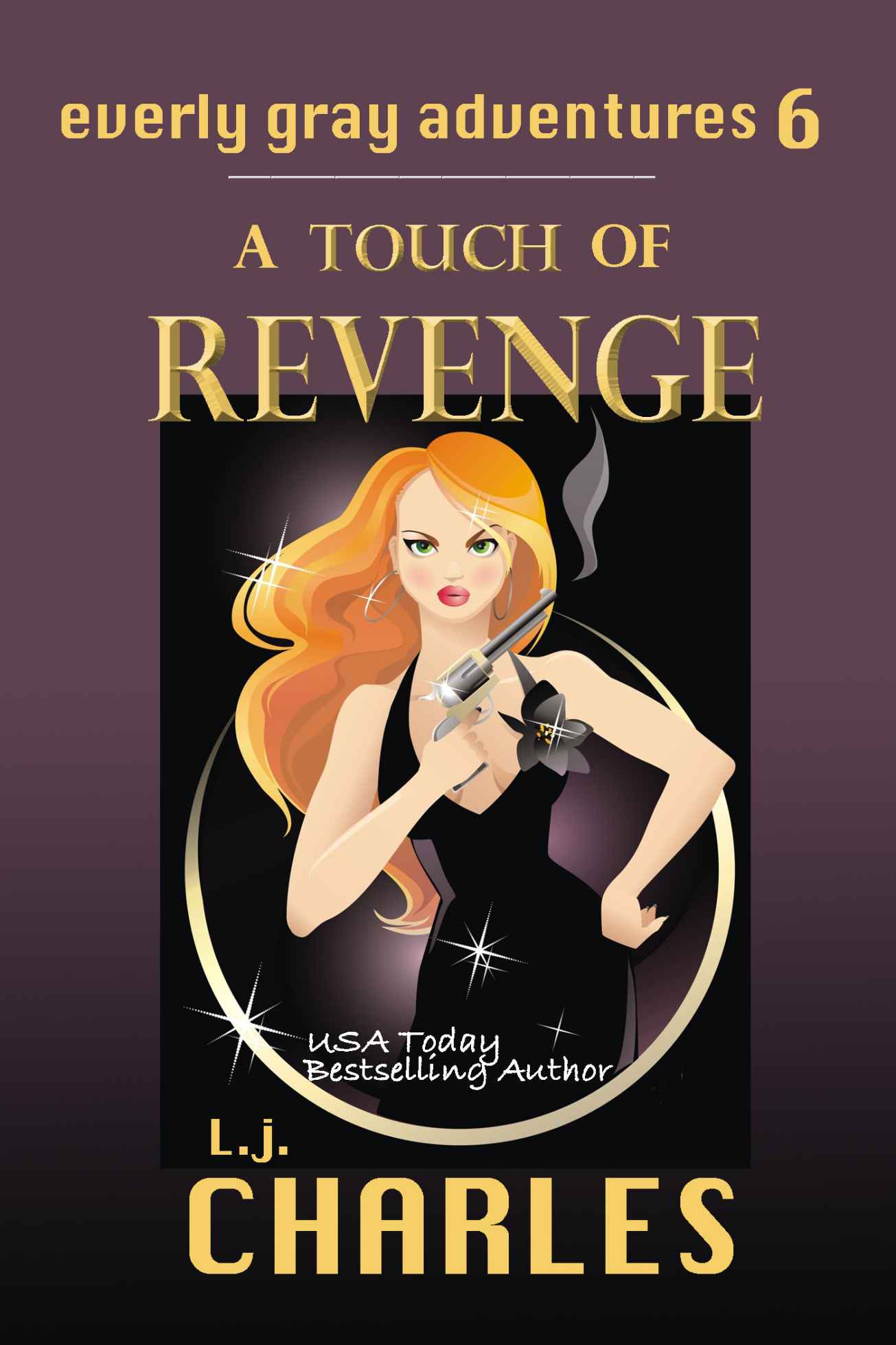 A TOUCH OF REVENGE

Revenge is sweet. Or is it?

When Everly Gray learns who killed her parents, she’s ready to take revenge, but has nowhere to start. Frustrated, she makes an unplanned detour to search her murdered husband’s study. When she discovers a possible location for the person behind the assassination, Everly follows that lead to the English Riviera. Things go sideways, however, when she learns someone has been stalking her and collecting surreptitious photographs since she was a baby.

In a surprising role reversal, Tynan Pierce has agreed to be Everly’s backup. He gives her control over the investigation and, with complete trust, over her subsequent revenge. But something isn’t right with him. Complications escalate when the investigation leads them to Ireland and to Pierce’s childhood home.

Everly’s feelings for Tynan, a man she’s had a long-standing hands-off attraction with, throw one more snag into her mission. Revenge is finally at her ESP fingertips, but at what cost to Pierce and his family? …and to her?

A Touch of Revenge

All rights reserved, including the right to reproduce this book or portions thereof in any form whatsoever—except in the case of brief quotations embedded in critical articles or reviews—without written permission. The author acknowledges the copyrighted or trademarked status and trademark owners of the following mentioned in this work of fiction: Diet Coke, Walmart, Smith&Wesson, Boker, and Glock.

With special thanks to my readers.

Without you, Everly wouldn’t have found her revenge.

Everly Gray
: Red hair, midnight blue eyes, pale skin, of Scottish and Hawaiian heritage. Everly was born with ESP fingers. When she touches people or objects, she “sees” things about them.

Tynan Pierce:
Black Irish with dark hair and azure blue eyes. Moves like the night and doesn’t say much. Former agent with one of those three-letter agencies no one discusses, and moonlights as a physician. Yes, he does have a medical degree. Pierce has been Everly’s mentor in the world of chasing bad guys, and he used to be Annie Jamison (A.J.) Stone’s partner before she retired. He calls Everly Belisama, after a Celtic goddess. It means Summer Bright, and I believe it has something to do with her red hair, but I wouldn’t swear to it.

Loyria and James Gray:
Everly’s parents (featured in
To
Touch Poison
). Both were employed by the CIA, Loyria as a forensic anthropologist, and James as an attorney (his cover as a talented cryptologist). Loyria discovered a plant-derived formula similar to that used by Amazonian tribes in their euthanasia rituals. The government was interested in the formula and its potential for biological warfare, and joined with British and Irish intelligence to create the Megiddo Project, housed in a super-secret facility in the Amazon jungle. Loyria was the CIA member of the team, but refused to release the formula until she had an antidote.

Millie and Harlan:
The butler and gardener (respectively) whom Everly’s parents hired to care for their home, and for Everly while they were away on business. They became Everly’s guardians when her parents were killed.

Kahuna Aukele:
Everly’s grandfather. A sixty-something Hawaiian shaman with a devious mind. He teaches kahunas-in-training by avoiding their questions, forcing them think. He trains Everly when she’s in the islands, and recently passed his healing gifts to her.

Makani Maliu:
Everly’s grandmother, who was a gifted kahuna, and died before she and Everly could meet. But not before leaving some vital information in a form only Everly could find. She was childhood friends with Millie.

Adam Stone
: Blond with brown streaks, dark green eyes. Annie’s brother and a former homicide detective for Apex, NC law enforcement, currently working with the Honolulu Police Department. Adam follows procedure—always. He was Everly’s mentor for police work, but recently moved to Hawaii to be near Annie and his new niece, Madigan.

Whitney Boulay:
Former constable for Scotland Yard, Whitney currently lives in Hawaii and works with Adam at the Honolulu Police Department. She’s friends with both Annie and Everly.

Fion Connor:
(
To Touch Poison
) A colleague of Loyria Gray on the Amazon-based Megiddo Project and an agent for MI6. Fion is undisputed ruler of a large estate near the English Riviera.

Eamon Grady:
(
To Touch Poison
) Scottish, and the third member of the international team of scientists working on the Megiddo Project. Eamon was diagnosed with multiple sclerosis shortly after the project was underway. He’d do anything for a cure, and suspected Loyria’s formula was the answer.

I FINISHED MY DAILY TWO-MILE
run
,
kicked off my sneakers, dropped my shorts and t-shirt on the bathroom floor, and stepped under the shower spray. Time for my daily meditation. I’d clung to the same routine since the day I moved into my condo, and for the past eight months had used my running and shower time to meditate and heal.

The first few months I couldn’t get beyond the guilt—for being so angry with Mitch, for pushing him out of my life, for not stopping him before he stepped between me and a crazy man with a gun. Nowadays, I worked through those emotions more quickly, and had moved on to the next challenge: not feeling guilty about killing two people.

I was even beginning to understand the relationship between death and healing. Well, sort of. On my good days. But I still wore my wedding ring. And I still touched the pillow next to me every evening when I whispered
good night
to Mitch. Had he found healing in death?

Time. It was a good thing to take it in manageable increments, days, hours, sometimes minutes. I’d started to really believe that time could heal.

And my new skills added a hefty dose of confidence. Annie and Whitney had been training me in martial arts and knife fighting three times a week, and now I owned a legitimate Sig .380, I also met Adam at the police firing range a few times every month. I’d become an excellent markswoman, and yes, I was proud of my accomplishments. On most days.

When the shower ran cold, I towel dried and slathered on some pikake lotion. Its magical fragrance permeated the moist air in the bathroom, and when I stretched my legs out, my muscles breathed contentment from the early morning beach run.

MOISTURE BEADED ON MY SHOULDERS
and the soft Hawaiian breeze drifting through the window chased the droplets down my back. I shivered, and for some weird reason it woke a slew of emotion. Probably shouldn’t have stayed in the shower until it ran cold.

I brushed the water from my arms, scolding myself. “You’re stronger than this, Everly Gray Hunt. Hiding from reality is beneath you.” Alone in my bathroom, and my voice shook. How humiliating. It was obviously time for a change of exercise; maybe I should try the gym and beat the heck out of a punching bag.

Life was good in the islands, though it had been lonely for the past week, because my best friend, Annie, had rounded everyone up for a hiking vacation on the Big Island. They were probably having a blast, but I was glad I’d turned down the invitation to join them. It would have been way too much togetherness with my emotions still on the fritz.

They were due back later today, and Annie and her husband, Sean had planned for some intimate alone time, so were dropping Madigan—their daughter, and a bundle of trouble—off for a sleepover with me. I didn’t blame them for scheduling some adult time, because Maddie topped the Busy Toddler scale. Besides, I owed Annie big time for the hours she spent sparring with me, teaching me some of the finer points of martial arts and knife fighting.

I wound my hair into a loose knot, secured the towel under my arms, and wandered into the bedroom to check today’s personal coaching schedule. Three clients. A full day.

A rustle…like parachute material?…sounded from the living room. My heart rate kicked up a notch, and I considered the Sig .380 locked in my gun safe. Ten, maybe fifteen steps away. No. Surely there couldn’t be anyone in my house. I held my breath, listening. Absolute quiet. I’d set the alarm when I got back from my run, hadn’t I? I’d been so careful since Mitch was killed.

I shook off the nagging itch between my shoulder blades. It had to be my overactive imagination.

I trusted three people with my alarm code: Annie, Sean, and Annie’s brother, Adam. He might have shared it with his significant other, Ben, but it was doubtful. Adam was a homicide detective with the Honolulu PD and had caution down to a precise science. He was my surrogate brother, and I loved him dearly, but even when he was in protective mode, he’d
never
wandered into my home unannounced. And neither had my grandfather, Kahuna Aukele. He was blood family, but a mystery. Sometimes visible. Sometimes not. And though he was my teacher in all things Huna, he definitely didn’t show up
inside
my house unannounced. On the patio, yes, but… Oh, damn. My brain had resorted to babbling.

Another rustle, this one too loud to write off as a rogue wave or figment of my imagination. I peeked through the crack along the hinged side of the bedroom door and a ripple of anticipation glued me to the floor.

Tynan Pierce. He had no respect for locks whatsoever, and cargos made from parachute fabric were a likely wardrobe item for him, seeing as he was a retired spy and favored functional clothing.

He could only be standing in my personal space for one reason.

I stomped into the great room, heart thumping, and faced him. “Who murdered my parents?” Saying the words, hearing them, shut down my lungs. Black narrowed my vision to pinpoint focus—on Tynan’s eyes. Deep blue. Troubled.

Stolen Luck by Megan Atwood
Trespasser by Paul Doiron
When a Lawyer Falls in Love by Amrita Suresh
Billionaire's Fetish by Jordan Silver
Bear No Defeat by Anya Nowlan
Brooklyn Noir 2: The Classics by Tim McLoughlin
A Tale of Two Princesses by Ashenden, V.
Vienna Secrets by Frank Tallis
These Dark Wings by John Owen Theobald
Give the Devil His Due (The Sanheim Chronicles, Book Three) by Blackwell, Rob
Our partner