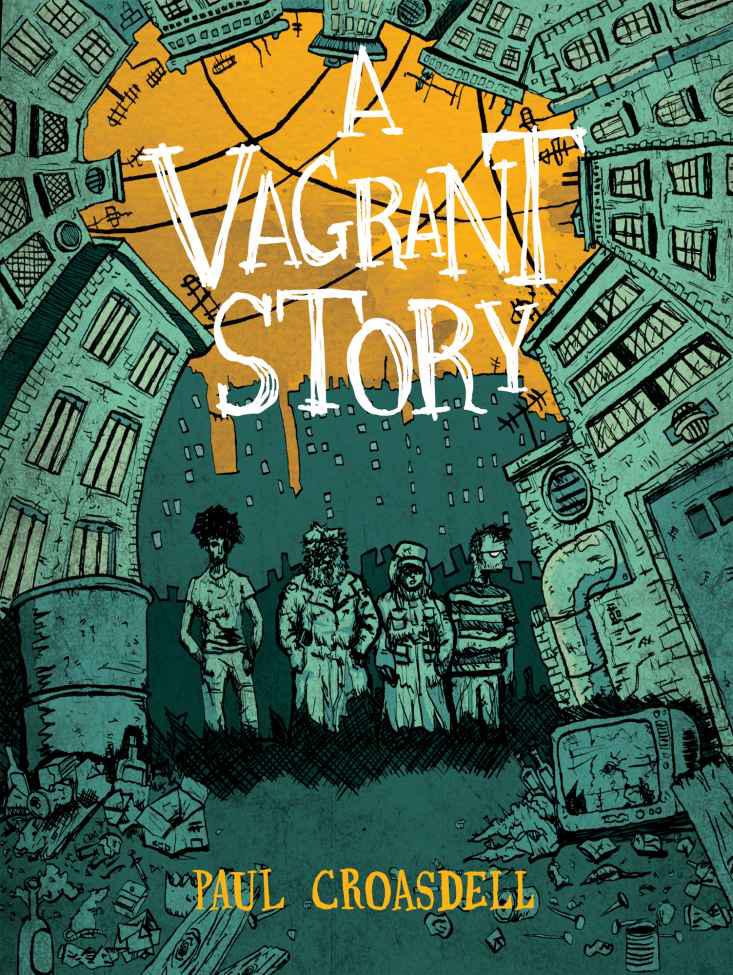 With t
hanks to my father Paul C for spell checking and my brother Arron for designing the cover.

One of the last trains of the night tore past. Its heavy rumble diminished to an unsettling vibration throughout the subway station. The train’s final echoes fading away, the sound of footsteps tapped down a stairwell to the lowest level.

Sierra was making her way back to her friends, having snuck away from them earlier. She’d grown fed up waiting around the subway station so the four of them could
scavenge from bins, or not even. Subway security tended to frown on those found rummaging about in tips, which forced them to wait around for the less-than watchful night watch. Of course, with subway bins on such high demand for their kind, that meant sticking close to guard them like dogs to their fire hydrants.

Between the Winter cold and general misery of it all, Sierra snapped, once again leaving her friends for good. And once again she decided to return.

Sierra stopped before descending the final corner of the stairwell to where the others waited. As if to preserve some stain of dignity she wrapped up all the notches of her oversized, brown overcoat, stuffing away the many layers of clothing she wore beneath. Sighing, she set about brushing back her long blonde hair so as to fasten strings of her green ear flap hat. She was coming back to them, that meant she’d lost whatever argument caused her to run away. That meant she’d be due certain gloating from a certain old drunk. Last thing she needed was to look a mess when taking it. Last thing she needed was for the old man to think she couldn’t get by without him.

With no more notches to tie she stood perfectly still and listened, if only to further delay the inevitable. It was silent. The platform cleared of people, the station empty, the picking seemed now there’s for the taking.

Sierra opened her eyes to find one of her friends standing in the stairwell in front of her, a short thin featured man who day in day out wore the same torn blue tracksuit top and sweat pants, clothing which stood in complete contrast to his lifestyle. His name was Henry, and right now he was in the way.

“Henry,” Sierra said. “Where are you sneaking off?”

Henry affixed his glasses as though shaken simply by bumping into her like this.

“I take it old Rum’s been picking on you again?” she said.

“N-No … well yes, but that’s not the problem. I thought I heard someone coming down …
I was right. It was you … turns out.”

“Was it? That’s nice.” Sierra listened a moment.

“Nothing. I just realised I can hear myself speak. Either Rum and Alex finally stopped arguing or we’ve got a funeral to go to. Well, at least the silence is one good reason to come back.”

“W-well actually…” Henry indicated a yellow dumpster beside the track. By it’s side stood the tall man, Alex, firmly watching over the tip like a guard at a palace gate. On closer inspection he’d actually just fallen into an upright snooze, resting against the wall to keep himself standing.

As most of their kind tended, he was another one rarely seen wearing anything but the same clothes. Unlike most of their kind he tended to vouch for less clothes over the average, slightly more sanity abiding, more clothes. Even in winter he continued wearing those same loose fitting white cargo pants, and the most bizarre of all things, a blue T-shirt at least one size too small. The man would rarely shiver, not often from fear and never from cold. He tended to have little to fear from the average thug, mostly because he often stood at least a foot taller than the average thug. Though dwarfing the lot of them in height, in weight even the puny Henry might match him. The stick like proportions of his arms and constant paleness would have some believe he might crack at the slightest breeze. They’d be wrong.

Sierra, now confident in the serenity of the station floor, sauntered gracefully toward Alex. “I see Alex is as lively as ever. Speaking of noise, where’s Rum?”

Henry sent a suggestive nod to the dumpster. Rummaging from within answered her question. This notification brought the girl to an immediate halt.

A gravelly, aged voice began blaring out from within the dumpster. “Blondie! Blondie is that you? Where is that thick dyke?”

Alex, yet to open his eyes, replied to the old man, “She left ages ago. Right after you started your second bottle of whiskey.”

“Right after you threw the first one at her.”

“Then where the hell did she go?”

“Said something about going to find other friends, better friends.”

At once old Rum exploded from the dumpster, his green trench coat covered in the stains of everything he rolled around in. A banana peel sat on  his shoulder like the cherry on a cake. Instinctively wiping the grit from his brown matted beard the old man turned to Alex, damningly reaching out the tip to grab him by the collar.

“She wanted to hang around with someone else,” Alex replied calmly, blandly, or emotionlessly, as his general tone often sounded.

“That little bitch! After everything I do for her she goes stabbing me in the back like that. If I ever see her again I’ll-”

“You’ll what!?” Sierra snapped, stepping up to him with all intention to brawl.

“You’ve some cheek talking about me like that, like you’re the god damn saviour of my life. I get along fine without you!”

“And another thing, you quit calling me Blondie right now. It wasn’t even cute when I was a kid and it’s less so now.”

The nickname was something Rum thought up when he first found her at age ten, eleven years ago. No one other than those two really knew what it meant. People assumed it was simply because Sierra had blonde hair, a simple enough basis for most, they viewed it as an intellectual stretch for old Rum. He’d use it so much it became mutual even beyond this merry band of four she sometimes called her friends.

Ignoring her complaint, old Rum’s words changed to another tune. “Okay … so you decided to come back, good for you. Can’t blame me for thinking you ran away, you’ve got the rep for it. Now … onto the far more pressing matter.” Led by a sniffing twitch of his nose, Rum waded his way toward her, body hanging out the tip like a plant in a flower pot. “What’s that in your hand? Looks like a burger box … smells like a burger.”

“Burgers tend to. Don’t know what you’re drooling about. You think you’re getting some after everything you said? Maybe I’ll have it all to myself, may even eat it right now.” She articulated further by opening the container and dangling the burger above her mouth. “But maybe I’m not hungry … I’ve eaten loads already. An apology might fix the problem.”

“Aw c’mon Blondie … I mean, Sierra. Give us a bite.” Rum watched cautiously as the burger went closer and closer to her lips.

She bit through, swallowing a quarter in one mouthful. “Still some left if you want it. Beg harder.”

“Had me fooled a second ago.”

Rum began climbing awkwardly from the tip, his long sickly green trench coat wrapping around his own legs. Fumbling about in his own disgrace, he suddenly lunged for Sierra with all the grace of a polemic monkey. With a sneaky smack, he managed to clip her hat off before she ducked away.

“You little trollop! Stand still and take what you deserve!”

Rum clenched his fist with apparent intention to strike. For which he found himself crumbling on the spike of Sierra’s knee. He crumbled down and in on himself, in the long groaning, bowing in prayer, won’t be getting up for a while kind of way.

He found himself staring to the ground, and more importantly, at the burger which fell there. “The burger! You ruined my burger!” he declared, which proved enough to resurge that lost adrenaline. He tackled her from his downed state, taking her to the ground.

“So…” Alex said to Henry, the pair of them watching from above. “They’re fighting over a cold dirty burger … it’s finally come to this.”

“Alex,” Henry replied, looking up to him mournfully. “Can’t you … stop them? You know?”

“Just a little longer,” Alex said bearing a pleasured, yet somehow callous little half smile. Rum and Sierra’s bickering often amused him, a rare trait for a man whose permanent tight lipped expression could frighten a small child.

Grabbing Sierra by the scruff of the neck, he lifted her from the floor. Almost effortlessly he suspended her in mid-air. To look at, Alex was hardly a well-built man, but did have strong points where they mattered. His lanky height alone provided natural advantage over the common man. That’s not to say he didn’t have muscle, just that the muscle he had came tightly wrapped around lengthy stretches of bone.

In hope of freeing herself Sierra pulled his shaggy brown hair. Despite all her wailing, despite all her squirming, she subsided to his might. She simply lowered her head and released a defeated little noise, warm breath turning to steam on the cold winter air.

Rum picked himself up from the ground. Although indifferent to finishing the fight he grumbled at Alex for interfering, rubbing his jaw at the same time. He displayed a great deal of pain for a man with no marks on him. “I had her you know that.”

Alex released Sierra. Landing prominently on her feet, she began brushing dirt from her tanned overcoat, the outer layer of her many tattered, heat insulated clothes.

Rum did the same, pretending it bothered him. “I’m the only one who went through the bins …
I deserve a fucking burger at least.”

“No joy there,” Alex said. “Looks like we were beaten to the punch, someone had this place cleared before we got here.”

“I’ve searched all the bins and not a scrap,” Rum added. “It’s uncanny I say. Some other bums probably figured our routine and snatched it all first, either that or the staff cleared it. Now after all this she went and dropped the only food we have.”

“You mean the only food I had!” Sierra replied.