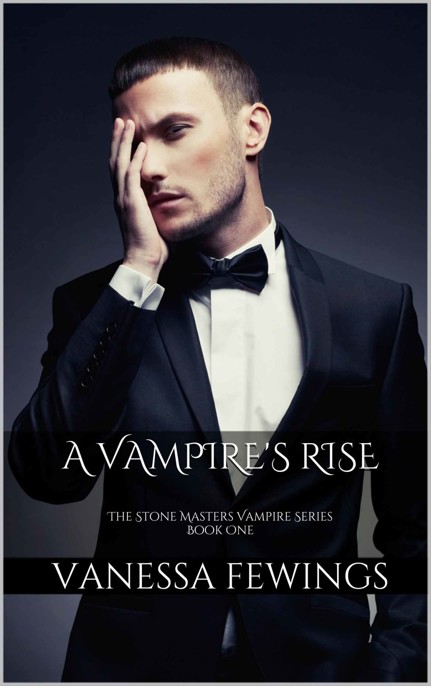 A Vampire's Rise (Book I)

Indie Pixel Studio
All rights reserved. No part of this book may be used or reproduced in any
manner whatsoever including Internet usage, without written permission of
the author.

This is the closest scent to her that I can find. With care, I place the bottle down, dropping the delicate stopper back into position, pushing it aside. An inner tide sweeps me up as nostalgia saturates my senses.

Deep in thought, I recapture her, bewitched, lost to reason, hoping that this impassioned fever breaks, dissipating these emotions. Freedom from such has eluded me thus far. Of course I’ve taken lovers since, but they’ve come and gone like seasons, unworthy of memory.

The darkest hour draws near.

And I find myself predictably alone in my London residence. Comfortably ensconced in my shadowy sanctum, I rather enjoy my own company. I’m assured solitude.

Despite the minimal décor, the room is homey, with time-honored furniture that captures the classic style. Leaning against the arched window frame, I trace the tumbling leaves. A howling wind blindly forges on, weaving its way amongst the lamp-lit streets. Taking in the dramatic nightscape, it’s easy to become entranced by the grey city skyline. Little evidence is left of its former silhouette.

Rain batters the window. I’ve left it ajar in hope of airing this neglected room, and some drops find their way through, settling below the ledge, pooling on the stone floor. Turning away, I take a seat at the oak writing desk, resting in the high-backed chair. An all too precious moment taken to reminisce, inspired by thoughts of missives once written here, others received, the waxed seal crumbling as the envelope was ripped open and the letter read.

Elm beams run along a low ceiling, holding the warmth. An open fire crackles in the hearth, casting out the occasional spark. The wooden mantelpiece is engraved with a fleur-de-lis. Scratches surrounding the design reveal someone took a dislike to the decorative symbol. The carved iris, though blemished, remains recognizable, suggesting that the culprit became bored and moved on. The carpenter’s choice of mahogany saved the design.

There are symbols like this throughout, hidden motifs incorporated into every room, their purpose lost in time. Another secret of this mansion that I’m privy to, a clandestine doorway behind a contemporary painting hanging on the far wall, a discreet exit should one be needed, another of many intrigues, its past is as rich as its thickly lined, black velvet drapes.

I sip from the crystal glass of red and savor the taste. The candlewick burns, but I don’t require it. The stillness would be eerie if it weren’t for my refined senses, an evolved heightened awareness enabling the detection of the smallest movement or the slightest sound—a supernatural advantage.

I long gave up sleeping by night. These dark hours, I now own.

When your heartbeat ceases, it’s fatal, though for my kind it’s just the beginning, an endless pathway strewn with the remarkable. Myth unravels as we, the immortals, linger in the underworld and, when the mood takes us, integrate with the living. I don’t consider myself the walking dead, for I’m very much alive.

The fresh breeze clears my mind and my thoughts wander back over centuries to the year 1745. I’m lying naked on a rug before a fireplace, entwined with my lover. We’re savoring what is left of dusk, sensual delights beyond imagination. She’d captivated me long ago and I’d become obsessed with her. Over time, I’ve come to appreciate the words she’d spoken that winter night as I caressed her soft skin and kissed her.

“Orpheus, why do you refuse to talk about the past?” she asked.

“Some memories, I choose to forget.” I sighed.

She shifted in my arms. “So you hold onto the pain and forget the cause?”

I pushed her away. “Whatever it takes.”

“To survive eternity?” she whispered.

She dressed and withdrew, leaving me to consider our conversation. Finding no benefit in sentimentality, I ignored her.

Her face is fading.

My beloved had changed everything, the woman who’d saved me time and time again, patiently guiding.

Now I understand. It’s time to write it down. For her, I’ll document all that I know, everything that I remember. If I capture those moments, she’ll come back to me. I’ll feel her near, hear her voice, and sense her touch.

I refuse to let her go.

With a glance at the crimson glass, I’m reminded that it wasn’t always this way, though history is invariably distorted, skewed prose, old-fashioned perspectives deteriorating in unread books.

I, however, am a walking historian.

Once, I desired death but feared to drink from its cup. Such reticence has since waned.

I just noticed the candle’s gone dark, leaving a wisp of curling smoke. I’m too easily distracted and drawn into the drama of the past as I remember the defining moment, the event that changed everything . . .

OUT OF THE DARKNESS, I saw it.

More alarming, it saw me, too. Even at the age of nine, I knew well enough to remain still.

The bull would be attracted to movement.

I sucked in air, trying to fill my lungs, yet no breath remained. Orange flames flickered from the few fire torches positioned around the empty arena.

He trotted toward me and then broke into a gallop. The ground shook and time slowed, forcing a dreamy sense of reality. Hoofs skidded to a stop, spraying up a cloud of dust. Sweat evaporated off his hide and a pungent aroma reached my nostrils.

I bit down on my lip, fists clenched, fingernails digging into my palms, though I barely felt them.

He snorted, sniffed, and tilted sharp, devilish horns. My heart pounded, racing ever faster, and my hands shook as I rose to my full height and pulled my shirt over my head, hating those vulnerable seconds, careful to minimize my movements.

He pawed the dirt.

“Control with composure.” My brother’s words spoken to me long ago, conveying his poise as a seasoned bullfighter.

The bull flicked his tail and snarled. I judged which horn he favored, indicating the direction he’d go.

He thundered toward me, his hoofs rhythmically striking the ground, and I raised my make-shift cape. It brushed over his horns as he galloped past, and swerved left, snorting stale breath that left a putrid taste buried deep in the back of my throat. Lumbering, he turned to face me again, inclining his enormous head. My dry tongue cleaved to the roof of my mouth and I tried to gulp my fear. Taking short breaths, unable to remember my last, I suppressed a whimper.

Large nostrils sniffed the air again. I steadied my hands and flicked the garment as he lurched under my left arm, spraying up soil.

Head down, he followed.

My back struck the arena wall, betraying my escape, trapping me between it and him. His stare met mine and went on through. In a state of dread, those terrifying seconds seemed more like hours as they took my breath with them. I struggled to recall which saint could be rallied.

The ground vibrated, bringing with it a sea of black as a billowing dust cloud arose. I threw my shirt over his head and then dived to the right of him. The material blinded him and he plunged into the stone, horns scraping and grinding. He bellowed and shook his head.

I leaped to my feet and bolted along and over the enclosure, landing on the gravel, scraping my hands and knees. Still tasting the dirt he’d sprayed up, I turned awkwardly and peered back. The bull’s eyes bulged, his tail hung low between his legs as he trotted, searching. I sighed, almost forgetting my stinging, bloodied knees.