Read A Vision of Light Online

A Vision of Light 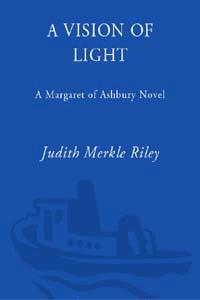 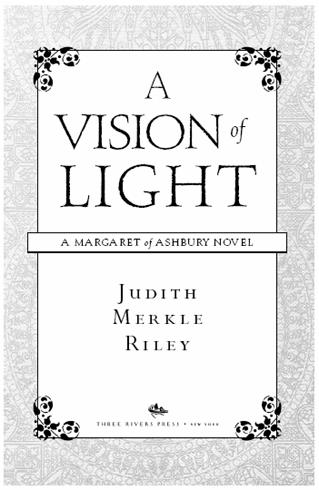 for
ELIZABETH
with love

I ACKNOWLEDGE WITH GRATITUDE THE SUPPORT
and inspiration of my family, of Susan Kullmann Puz, who read the first draft, and of the late Susan Hamilton, who encouraged me to write. I am grateful, too, for the encouragement and intelligent assistance offered by my agent, Jean Naggar, and my editor, Carole Baron.

Several wonderful libraries have supplied the research materials on which this book is based. I particularly want to thank the Honnold Library of the Claremont Colleges, the Pomona Public Library, and the Francis Bacon Library. Most especially, I am grateful for the splendid medieval resources of the Henry E. Huntington Library of San Marino, California, where the greater part of the research for this book was done.

I
N THE YEAR OF OUR LORD
1355
, THREE DAYS
after the Feast of the Epiphany, God put in my mind that I must write a book.

“I am only a woman,” I said to the voice in my mind. “I have no letters, and do not know Latin. How shall I write a book, and what shall I put in it, since I have never done any great deeds?”

“Put in it what you have seen. There is nothing wrong with being a woman, and doing ordinary things. Sometimes small deeds can show big ideas. As for writing, do as others do: get someone to write it for you.”

“Voice,” I said, “how do I know you are from God, and not from the Devil, tempting me into something foolish?”

It seemed like a good idea to me. The more I thought on it, the better it was. I like to hear books read, I thought, but I have never heard one about women. Sometimes my husband reads to the household from a book of travels, about the marvels that lie in far places. Sometimes we have a priest to read high thoughts and worthy meditations for the improvement of our souls. I would like to hear a book read such as the one the Voice told me about.

I told my husband that a Voice in my mind which was clearly from God told me to have a book. He answered, “Another voice again, eh? Well, what is my money for, but to indulge my sweet poppet? If you wish a book, you may have it, as far as I’m concerned. But I must warn you that it will be no easy thing to find a priest to write for you.”

My husband understands a great deal about the world, because he has been in it much longer than I have. He was not wrong about the difficulty. The first priest I asked grew angry and refused all money for such a task. He looked at me with his sharp eyes and said, “Who put this in your mind, the Devil? He often plants improper desires in women. Women have no reason to write anything at all. They do not take part in great deeds, nor do they think sublime thoughts. These two things are the only proper reasons for writing books. The rest are all vanity, and will lead others into sin. Go home and serve your husband, and thank God that He has made you humble.”

I was very discouraged.

The Voice said, “Keep at it, Margaret. I didn’t think you were the sort of person who gave up so easily.”

“It’s really too much for me this time. Everyone’s always telling me what’s impossible, and maybe this time they’re right. No man wants to write down what a woman has to say.”

“You just haven’t found the right one yet,” said the Voice. “Keep on looking.”

A
T THE WEST END OF THE GREAT NORMAN
nave of St. Paul’s Cathedral in the City of London, a tall, angular figure in a nondescript, threadbare old gray gown lurked by a pillar, intently watching the throng of merchants, pious ladies, servants, and clerics as they went about their business. St. Paul’s was a good place to find work: at one pillar unemployed servants stood, waiting for offers, while at the north
Si quis
door, priests did the same thing more discreetly, posting neatly written little notices that they were available for any vacancy. Here at the west end twelve scribes of the cathedral sat at desks to write letters and draw up documents for the public; it was around this place that Brother Gregory had prowled for the last several days, waiting to snap up any copying business that might fall unattended from their tables. Two days ago he had written a letter for an old woman to her son in Calais, but since then there had been nothing, and Brother Gregory had begun to have indecent dreams of sausages and pig’s knuckles.

It was odd how voices reverberated and were lost in the nave. From somewhere far away the thin thread of a melody descended, to be interrupted by the rattle of voices from one of the nearby bays. A knight had entered by the main door without remembering to remove his spurs. There was a chatter and a flurry as white-surpliced choirboys swarmed around him to demand their customary tribute. As Brother Gregory watched the scribes’ desks, he noticed a young matron, followed by a serving girl, as she went up to the first desk, but the sound of their conversation, although it was fairly close, floated away and was lost. He watched her walk to each of the desks in turn. As she paused at the second desk, the clerk at the first desk turned to see what his colleague would do. When the second clerk looked down his long nose at her as if he smelled a bad fish, the first clerk laughed behind his hand. As she turned to go to the next desk, Brother Gregory could see her profile. Her chin was set hard.

A stubborn woman, thought Brother Gregory, as he watched her stand behind an old man waiting at the third desk. Stubbornness is a bad quality in a woman.

Then she passed to the next scribe. This one, a fat red-jowled cleric, laughed in her face. Then he leaned conspiratorially over to his colleague and whispered behind his hand. The next man whispered in turn to his colleague on the other side, who, when she stood at last before his tall desk, pointed over in Brother Gregory’s direction. She turned suddenly and stared at Brother Gregory across half the width of the nave, to where he stood by his pillar. She looked a little puzzled and disappointed but then started toward him.

She didn’t look as old as he’d supposed at first. Not more than a year or two over twenty, he thought. A dark blue cloak with the hood pulled up covered her dress entirely, revealing only the edges of her white linen veil and wimple. She looked well off: the cloak was lined in rich fur and fastened with a gold filigree brooch. She had come through the spring mud on foot, her wooden pattens were still strapped beneath her embroidered morocco-leather slippers. She was of medium height, but even on the high, carved pattens she seemed smaller than she actually was, for she was slender and fine boned. Brother Gregory thought he saw a sort of lost look on her face, but some women seem always to look a little confused. After all, many of them were incapable of dealing with a man’s world and really should not be allowed out-of-doors alone. It couldn’t be much of a job she wanted done, if all the cathedral scribes thought it was a joke, Brother Gregory mused to himself. Well, it would be better to take a small job than have none at all. These unpleasant dreams had been interfering with his meditations; maybe he’d get a good dinner out of this woman. Then he could continue his search for God undisturbed.

The woman hesitated for a moment, looking Brother Gregory up and down, and then said firmly, “I need a clerk who can write.”

“That is self-evident,” responded Brother Gregory, inspecting her more closely. Rich, very rich, he concluded. And self-willed too.

“I mean write, really write.” They’ve played a joke on me, those cathedral clerks, thought Margaret. The man’s a beggar—one of those vagabond thieves who dress up like friars to get money. He probably can’t read and write at all. He’ll make a great show of it for a while, until he’s paid, she worried. Then he’ll walk out, leaving me with pages of meaningless markings and everyone laughing at me for a fool. And I’ll be lucky if he doesn’t take the silver spoons as well. Horrid, horrid Voice! Why didn’t it bother someone else?

“I can write,” said Brother Gregory, with calm arrogance. “I can write in Latin, French, and common English. I will not, however, write in German; it is a barbaric tongue that curdles the ink.”

He speaks properly, thought Margaret. Not like a peasant or a foreigner. I’ll try him. So she plunged on: “I need a clerk who can write a whole book.”

“A copyist for a book of prayers? I can do that.”

Brother Gregory was shocked. He was dimly conscious, too, of an amused glitter in several pairs of eyes at the scribes’ desks, as they watched the negotiations from a distance. Brother Gregory glowered at the woman. She was spoiled to the bone. What foolish rich man was indulging these insane fantasies? Clearly she thought that money would buy everything, even a man’s integrity. He was as courteous as possible under the circumstances, but soon enough he sent her off under the sharp eyes of the cathedral scribes.