Read A Wayward Man: A Prequel to A Dangerous Invitation (The Rookery Rogues) Online

A Wayward Man: A Prequel to A Dangerous Invitation (The Rookery Rogues) 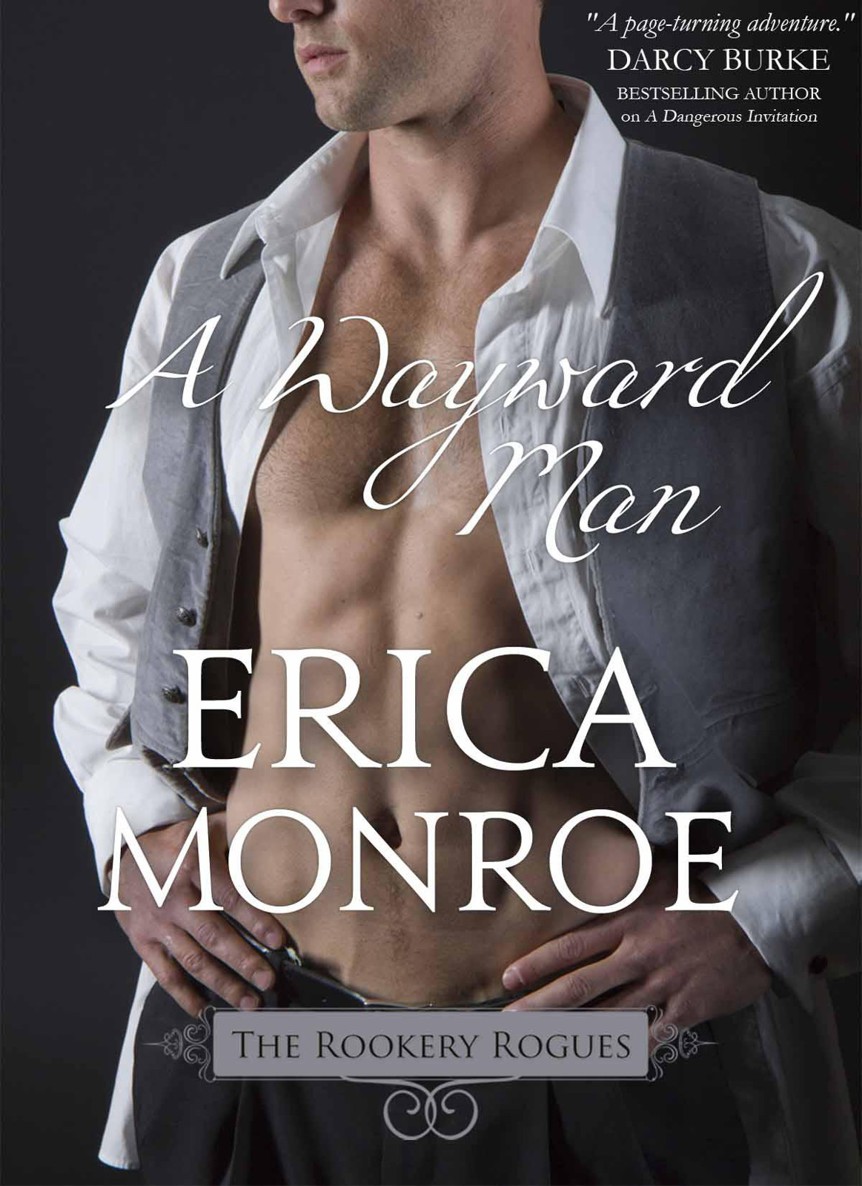 Daniel
O’Reilly has everything: the job of a lifetime and the love of
the only woman he’s ever wanted. But the siren’s lure of
gin calls to him, and Daniel can’t shake it. With each passing
day, his life spins more out of control, until one night he’s
wrongfully arrested for a murder he didn’t commit.

Shipping
magnate’s daughter Kate Morgan knows her betrothed has flaws,
but she’s determined to stick by him. Resourceful and smart,
Kate believes that she can conquer their problems with force of will
alone. But even she can’t stop Daniel from leaving, when the
only other option is execution at Newgate Prison…

A prequel to A Dangerous Invitation

This is a work of fiction. All of the characters, organizations, and
events portrayed in this novel are either products of the author’s
imagination or used fictitiously.

Excerpt from
A Dangerous Invitation
copyright 2014 by Erica McFarland

Excerpt from
Secrets in Scarlet
copyright 2014 by Erica McFarland

All rights reserved. The author has provided this book for personal use
only. This book or any portion thereof may not be reproduced or used in
any manner whatsoever without the express written permission of the
publisher except for the use of brief quotations in a book review.

For Sam
Thanks for sticking with me all these years. Truly, I do love you like a sister.

From the moment he
met Kate Morgan, Daniel O'Reilly knew she was the woman for him.
There was something about her that made him feel like he was at home,
so many miles away from his family in Sussex. It didn't matter that
he was woefully under-prepared for his job as a shipping assistant.
Here, in this crazy mercantile labyrinth of London, he understood
only the drive to succeed. To prove that he was worthy of Kate's
love, he'd worked long nights until he collapsed at his desk from
exhaustion. He'd accepted every slur about his Irish heritage that
the workers of Emporia Shipping threw at him because he knew that
Kate believed in him.

Sitting across from
Kate’s father in his sprawling office, Daniel’s foot
tapped with the same apprehension that always struck him whenever he
needed to broach a difficult subject with Richard Morgan. Kate's
father had a wicked temper, yet Daniel couldn’t help but admire
him. He was the sharpest businessman Daniel had ever encountered.

“I want to ask
Kate to marry me.” Daniel watched Morgan's face for some sort
of reaction. The man was usually unreadable. Hell as a faro opponent.

Morgan’s
straight nose didn’t twitch, and his wide forehead didn’t
crease with concern. “You're quite certain about this?”

Daniel stood his
ground. “More certain than I've ever been about anything in my
life, sir. I love your daughter and I want to marry her.”

“Katiebelle
won't be an easy one to please.” Morgan folded his hands
together atop his mammoth desk. “I've raised a headstrong
chit.”

Daniel nodded. “I
know. Her fierceness is one of the first things that drew me to her.”
She left him in a haze clinging to the only thing that'd ever made
sense, when the rest of the world clouded into a constant storm of
deadlines and fatigue.

“You have my
permission then.” Morgan gave a nod, his weathered face
crinkling in a grin. His earlier antipathy was gone in the face of
Daniel's surety. “Do be wary. I've taught her to use a
flintlock. I should hate to think she'd shoot the best shipping
assistant I've had yet.” Morgan winked at him, so quickly
Daniel might have missed it had he looked away.

He didn't deserve
Morgan's praise. Not when he'd buggered the last set of shipments
because he'd been in too much of a hurry to sneak into Kate’s
second-story bedroom window by way of the lattice outside. He’d
signed off on the forms without closely reading them.

Soon, Morgan would
realize his mistake and take him to task for it.

Daniel was a
failure, a failure to everyone but Kate. He'd never let her down.

Morgan held his gaze
a moment longer. “I've known you were something since I first
saw you in my warehouses. Said to Balfour, I did, that I'd never seen
a workhorse like you. You made unloading crates seem like the most
important task in the world. Never lost a single container when you
handled the cargo.”

Daniel ran his thumb
against the gold-flecked lacquer on the leather chair's arm, back and
forth. “You took a chance, sir.”

Morgan pushed his
chair back and rose, going to the liquor cabinet he kept on the left
side of his office, crammed in between rows and rows of books and
various antiquities. He’d started Emporia Shipping because he
wanted to explore the high seas. Twenty years later, the company was
considered the European equivalent to the East India Trading Company.

“A chance that
has paid back handsomely for me,” Morgan noted, glancing over
his shoulder at Daniel. “Has the staff started to adjust to
your new role? It’s been three months. If the reception isn’t
positive, you can tell me. I’ll deal with the issue. Can’t
have you being treated badly.”

“It’s
been fine,” Daniel hedged, grateful for the fact that Morgan
had turned back around.

What else could he
say? Aside from Kate, none of the workers in Emporia’s main
office had accepted him. The chief accountant, Laurence Bartleby, had
cornered him in the records room the week before. With him were his
two clerks, sneering as Bartleby prodded a finger into his chest.
“Your accounting is overdue,” Bartleby had hissed. “What,
you fool Irish, can’t you count?”

Daniel had held his
anger in check, calmly explaining to Bartleby that he’d placed
the ledger on the accountant’s desk the night before.

Blood boiling,
Daniel stepped closer to him, fists clenched. The accountant had
turned on his heel and stalked off, the clerks looking back at Daniel
and sniggering as they left too. The incident was only one in a long
series of similar with other employees who shared Bartleby’s
views on his recent promotion.

But if he told
Morgan, then he’d be the weakling who couldn’t fight his
own battles. The man who’d made it so the reputation of
Morgan’s daughter was in question. Devil take it, he’d
win the respect of his colleagues on his own merits, for Kate
deserved a man strong enough to defend himself.

“Good.”
Morgan splashed scotch from a crystal decanter into a small glass.
“Kate tells me you're a gin man.” He reached for another
bottle, tucked behind the scotch.

“No harm in
imbibing, boy,” Morgan said. “In my youth, I was a
scoundrel as much as any other. But you’ve got to understand,
my Katie won't stand by while you're off to the public houses.”

“Obviously
not,” Daniel agreed, like he didn't go to the Captain Kidd
every night after visiting Kate.

Morgan came forward,
the two glasses in his hands. He placed the gin in front of Daniel
and took the scotch for himself. Morgan raised the glass to his nose
and sniffed, gesturing for Daniel to do the same. “A good
liquor can be judged by the scent.”

As if Daniel
couldn't tell by the scent alone that this gin was from a better
distiller than he could afford. None of the back alley dram shops for
Morgan. Daniel was richer than he'd been before Morgan found him for
sure, but he didn't have the blunt of any of the men who had offered
for Kate's hand in the past.

She'd turned down
three proposals because she didn't feel a connection with those men.
But she felt something for him. He remembered her soft chocolate
locks splayed across his pillow, the heat of her bare body pressed up
against his. He hadn’t meant to take her virginity—hadn't
meant to be such a damnable rogue—but she fired his body like
no one before. “I want you,” she'd said. “I don't
want to stop.”

Heat inflamed
Daniel's cheeks as Morgan coughed to get his attention. Kate's father
had his glass raised in salute to Daniel.

Christ. Keep it
together, O'Reilly.

“Welcome to
the family, son,” Morgan said. “It's about time I got to
say that.”

Daniel knocked back
half the glass in one sip. He didn’t cough, or sputter, or do
any of those things an occasional drinker should have. Did Morgan
already know the depths of his thrall? And if he did, why would
Morgan care? A few blacked out nights didn’t equal something to
be concerned over. Daniel had everything under control.

“She hasn't
said yes yet,” he reminded Morgan. He stared into the gin,
wishing the translucent liquid could tell him the future.

“She will have
you,” Morgan assured him. “I know my daughter, and she
loves you.”

Daniel took another
sip of the gin, slower this time. Leisurely, when all he desired was
the burn and the fade of reality. “I am the luckiest of men.”

Kate Morgan perched
on a settee in the lobby of Emporia Shipping's grand offices, in deep
conversation with her two closest friends. She ran her fingertips
down her silk gown, seeking warmth for her frigid limbs. It was
bitterly cold out for March, yet the lobby boasted a fireplace with a
roaring flame and so heat was slowly coming back to her.

Next to her on the
settee, Diana Chamberlain unclasped her blue drawn bonnet and shook
her head. Perfect red pin curls fluttered with her movement, bouncing
merrily. While other women spent hours with their maids to get their
hair to curl, Diana's beauty was entirely natural. Kate, whose brown
locks curled in a haphazard fashion in comparison to Diana's,
couldn’t help but feel insecure around her friend.