Read A Week at the Beach Online

A Week at the Beach 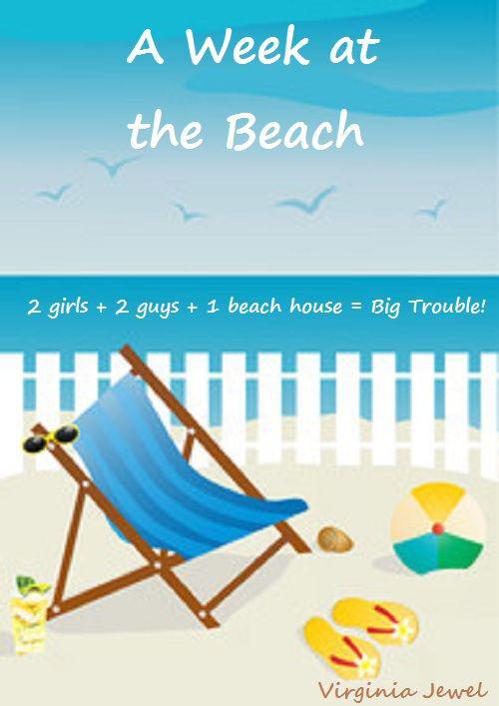 A Week at the Beach

There’s a New Sheriff in Town

Thank you to all my favorite chick lit authors!  You’ve inspired me beyond belief.

I rolled my eyes in response and pretended to be engrossed in the rows of rental cottages speeding past us as we drove.  I had no doubt that the house waiting for us would be luxurious, but Chrissy and I had different opinions on luxury.  Having spent the better part of my life living in a three-bedroom apartment with my parents and two little sisters, to me luxury would be having a private bathroom.  Chrissy’s standards were a little higher.

Chrissy and I met our first year at Columbia University and we have been best friends ever since.  The year before we met, Chrissy’s mother had finally snagged the ridiculously wealthy, and much older, husband she had spent her adult life looking for.  With that marriage, came the life of luxury.  Don’t get me wrong, being friends with Chrissy definitely had its benefits.  Spring breaks in Cabo, summer trips to Europe, and frequent visits to numerous day spas, were just some of the perks of being Chrissy’s best friend.  I certainly didn’t use Chrissy for the perks, but the truth was that being Chrissy’s friend meant you needed those perks.  Friendship with Chrissy was a full-time job, the kind of full-time job that requires you to be on-call at all hours of the day and night.

Take the previous night, for example.  Chrissy’s frantic three a.m. phone call woke me up and ended with me packing for this unplanned beach trip.  Normally, our summer beach trips were spent in the Hamptons, but Chrissy’s recent indiscretions found her on the bad side of the Hamptons’ elite.  To put it bluntly, Chrissy had sex with someone’s husband.  Actually, Chrissy had been carrying on a full-fledged affair with someone’s husband.  She was well on her way to getting a Park Ave apartment, and being a kept woman, when the wife got wind of the arrangement and put her foot down.  After all, Chrissy was only five years younger than the wife was.

So, in desperate need of a vacation, and banished from the Hamptons, Chrissy begged her stepdad for the keys to the Outer Banks beach house.  It doesn’t actually belong to Chrissy’s stepdad, it belongs to his family, but he agreed to let us stay in it for a week.  Much to Chrissy’s dismay, he wasn’t able to get us the corporate jet also.  That’s how we ended up flying commercial.  First Class in commercial, but commercial no doubt.

“Are you even listening to me, Cami?” Chrissy pinched me on the arm.

“Ow!” I leaned away from her and pulled my arm away.  “Yes, I was listening!  You were complaining about the same thing that you’ve been complaining about since we left the city.  I'm sure the house is going to be amazing.  Ned’s family has vacation homes all over the world.  Have you ever been to one that wasn’t amazing?”

Chrissy gave me an indifferent nod, “The one is London isn’t that great.  It only has five bedrooms and no pool.”

“Wow, really?” my mouth flew open in disgust.  Heavy with sarcasm, I continued, “That’s awful.  I don’t know how you managed to get through that difficult time.”

Chrissy rolled her eyes and shook her head at me.  With a heavy sigh, she scooted closer to me in the backseat and grabbed my arm.  “I know I’m being a pain, Cami.  Thank you for coming with me.  I don’t know what I would do without you.” She rested her head on my shoulder and snuggled closer to me.

Twenty minutes later, the driver dropped us off in front of the beach house.

“Wow!” I said as I took in the oceanfront mansion in front of me.

Chrissy smiled, “This is going to be an amazing week!”  She took off for the stairs, leaving me behind to carry our bags into the house.  Thankfully, she hadn’t packed much.  She planned to spend most of the week in bikinis, so there really wasn’t much to pack.

I struggled up the steps and dropped the bags on the floor as soon as I got through the open front door.  The inside of the house did not disappoint.  Italian marble tiles, ridiculously expensive furniture, and lavish décor greeted me.  I looked down at the busted flip-flops I was wearing just to remind myself that I did not belong in that world.

“Get your bathing suit on!  Let’s hit the beach!” Chrissy sped past me, scooped up her bag, and bounded up the stairs!  “I’ve already chosen my room!  Come on!”

I followed her up the stairs, past the second level, and all the way up to the third floor of the house.  As I walked up towards the bedrooms, I glanced at the open spaces on the second story.  I could see a billiards table, an entire wall of games, and the biggest television I’ve ever seen outside of an electronics store.

“These rooms are amazing, Cami.  The ones on this end of the house have an ocean view so I figured we would take these.”  She pointed at the two doors on the end of the hall.  Don’t be mad, but mine has a private bathroom.”

Chrissy disappeared behind her door and I opened mine.  A huge smile formed as I took in the king size bed sitting in the room.  As an adult who had been reduced to sleeping in a twin bed, nothing could have made me happier than the sight of that big squishy bed.  I collapsed onto it, spread my arms out, and stretched.

“This is my kind of vacation!” I sighed and snuggled into the comforter.

A loud knock on my door pulled me out of my relaxed state.  “Come on!  Let’s go down to the beach!”

“Give me a minute,” I shouted back at her.

In less than five minutes, Chrissy and I were out on the hot sand.  The beach wasn’t that crowded, but as usual, as soon as Chrissy revealed her super sexy bikini, and bikini body, a crowd of men started to gather.  Not wanting to get in the way, I headed towards the water to let the crowd thin out.  Chrissy was in her element and loving every second of attention she was getting from the men.

Another thirty minutes later, Chrissy waded into the water with a big grin on her face.

“What’s his name?” I asked when she was next to me.

“The guy in the blue shorts who was working hard to get your attention,” I nodded in the direction blue-shorts-guy had walked off in.

The fact that Chrissy was going to leave me alone in the giant house was not the least bit surprising to me.  In fact, it might be a good thing to get some alone time.  When you rent a room in a house occupied by two sixty year old women, and three others, alone time is something you are in desperate need of!

I gave Chrissy a warning look, but smiled anyway.  “Be safe.  Call my cell if you need me to come rescue you, and please do not let him get behind the wheel after drinking!”

Chrissy rolled her eyes at me, “Okay, mom!”

I looked back and said seriously, “I’m not your mom.  Your mother would have asked how much money he makes, what kind of car does he drive, and whether or not he has a portfolio!”

Chrissy giggled and dove down under the water.

We played in the water and on the beach until just before sunset.  Chrissy needed plenty of time to get ready for her date.  I didn’t mind, I’d put sunscreen on before heading out earlier, but I could feel a burn on my face and shoulders.  A cool shower and cold drink sounded good to me.

By the time Chrissy finished getting ready for her date, I had already showered and changed into my comfy pajamas, consisting of my old Columbia t-shirt and a pair of baggy sweats. I’d also fixed my dinner.  We’d made a stop at the grocery store on the way from the airport, so I was treating myself to a peanut butter and jelly sandwich.

“I can’t believe you are eating that!” Chrissy gave my dinner a disgusted look.  “You eat like a five year old!”

“I eat like someone on a budget, Chrissy.  I’m a teacher.  I can’t afford Kobe beef and foie gras!”  I walked past her and tossed my dirty paper towel in the trash.

Chrissy ignored my insult and flipped her hair off her shoulder, “What are you going to do tonight?”

“I am going to curl up in bed and read.”

“I am living a little.  I’m not reading anything academic, just chick lit!” I smiled a big cheesy smile and left her standing in the kitchen.

“I meant for you to go out and find yourself a man.”

I shook my head at her, “And do what with him?  Should I spend an entire evening stroking his ego, on the off chance that he might actually do something to please me, only to end up disappointed?  No thank you!”

Chrissy smiled, “If you spent the evening stroking something other than his ego, you might not end up disappointed.”

“A penis can’t solve everything, Chrissy.”

“Maybe not, but it certainly doesn’t hurt to let a few try!” She smiled brightly and grabbed her purse.  “Don’t wait up!”

5 Nights (Sinful Delights Romance - Boxed Set) by Michelle Hughes
The Beginner's Guide to Living by Lia Hills
40 Something - Safety by Shannon Peel
The Phoenix Variant: The Fifth Column 3 by Nathan M Farrugia
Game For Love: Devil of the Gridiron (Kindle Worlds Novella) by Melissa Blue
Vengeance by Carrero, Kelly
BENEATH - A Novel by Jeremy Robinson
Lost Treasure of the Emerald Eye by Geronimo Stilton
Walk like a Man by Robert J. Wiersema
A Broken Vessel by Kate Ross
Our partner