Read A Whispering of Spies Online

A Whispering of Spies 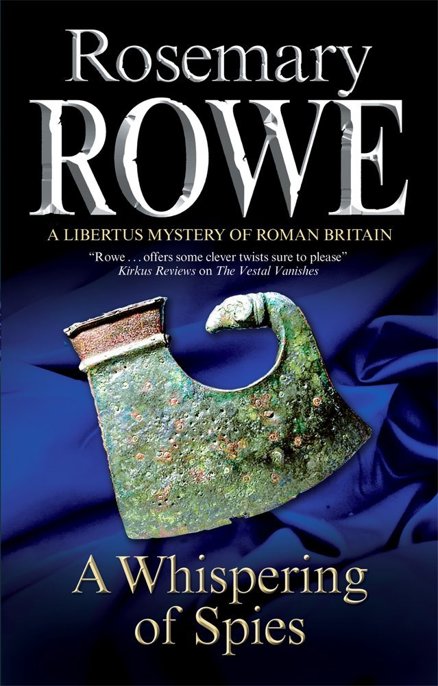 Previous Titles in this series by Rosemary Rowe

Previous Titles in this series by Rosemary Rowe

MURDER IN THE FORUM

A PATTERN OF BLOOD

THE CHARIOTS OF CALYX

ENEMIES OF THE EMPIRE

A COIN FOR THE FERRYMAN

REQUIEM FOR A SLAVE*

A WHISPERING OF SPIES
Rosemary Rowe

A whispering of spies.

To Kate and Peter, Cynthia and John

The story is set in the winter of 191–192 AD, when Britannia had been, for upwards of two hundred years, the most northerly province of the Roman Empire: occupied by Roman legions, criss-crossed by Roman roads, subject to Roman laws, and administered by a Provincial governor answerable directly to Rome. (This was probably Clodius Albinus by this time, although the date of his appointment is open to debate.) Latin was the language of the educated, people were adopting Roman dress and habits more and more, and citizenship, with the precious social and legal rights which it conferred, was the aspiration of almost everyone. The Emperor Commodus still wore the Imperial purple in Rome, although he was becoming increasingly deranged, and his lascivious lifestyle, capricious cruelties and erratic acts were infamous. He had renamed all the months, for instance, with names derived from his own honorific titles (which he had in any case given to himself), and officially restyled Rome itself as ‘Commodiana’ in his own honour, though there is little evidence that anybody used the term except in dealings with himself. Such discretion was obviously wise. Stories about him barbecuing dwarves are (probably) exaggerated, but the existence of such rumours gives some indication of the man who, fearing (justifiably) that there were plots against his life, maintained a network of spies throughout the Empire – as suggested in the book.

Glevum (modern Gloucester) was an important town. Originally a fortress, intended to command the river-crossing of the Sabrina (Severn), it soon became a privileged colonia – a retirement town for legionary veterans, where all freemen born within the walls were citizens by right, and where the council enjoyed sufficient autonomy for the town to be a sort of self-governing republic within the province. The original fortress had long since been replaced and resited a little further south, where the flooding of the river would no longer threaten it – which is the reason, incidentally, that the main road to Londinium ran not from the Western Gate, as one might reasonably suppose, but from the northern one, since it went that way to meet the pre-existing road which had been built to serve the earlier fort. On the former site – so fortunately flattened, cleared and partially drained – a lively ‘sub-urb’ had grown up outside the city walls, and this is where Libertus’s notional workshop is assumed to be.

At the time of this story there was still a garrison in the town, although it was apparently no longer kept at full legionary strength and much of the area formerly occupied by troops had been absorbed into civilian use – there is evidence that the forum itself was built on part of what had been the fort. However, the military presence continued to exist, and the Fourth Gaul Half-Mounted Auxiliaries, mentioned in the tale, was a real unit stationed in Glevum and then posted on, as the text suggests, although the date of their departure is not wholly clear.

The presence of this garrison was not merely symbolic. Although most of the quarrelsome local tribes had long since settled into an uneasy peace, there were still sporadic raids (mostly against military targets) by small bands of dissident Silurians and Ordovices from the west. It seems that (perhaps as a further act of defiance against Rome, since the Druid religion was outlawed by the state) these rebels deliberately adopted Druidic practices, including the macabre ritual of severing the heads of enemies and displaying them in ‘sacred groves’ as a sort of sacrifice to ancient gods. By the time of this story these rebels had been more or less entirely suppressed and although there were still occasional forays (and the mention of raids in the Rhineland is based on evidence) the events in the story are purely fictional: there is no record that there was any significant rebel activity so close to Glevum at this period.

Because of its status as a self-governing colonia it is possible that Glevum had no appointed lictors; similarly quasi-independent city republics and client kingdoms generally did not, and there is no evidence to suggest the existence of these officials in the town, although they were widespread elsewhere throughout the Empire, and their reputation would have been well known.

Effectively a kind of civil servant, exempt from military service and paid a fixed salary by the state, a lictor was usually not drawn from the most wealthy patrician class. Nonetheless he was always a freeborn citizen (as may be seen from the fact that he wore a toga) appointed as a personal bodyguard and attendant to some important magistrate, consul or governor. Indeed, the number of lictors was itself an indication of status: thus a consul might have a dozen lictors, a praetor a mere six, while the Emperor (at this period) was accorded twenty-four. (There were other kinds of lictors, too, at different periods, some representing different clans in the Curiate Assembly in Rome, and others who were attendants on official priests, but these do not concern us here.)

Such bodyguard lictors were generally less revered than feared. In addition to accompanying their master everywhere, even on a visit to the public baths, clearing a path for him through crowded streets and standing beside him when he made a speech, a lictor was entrusted with the punishment of criminals – usually a beating and occasionally death. (When Paul and Jesus, for example, were ‘given to be flogged’ it would have been the lictors who performed that task – and they were expert at it: flogging the victim to ‘within a breath of death’ but nonetheless carefully presenting him alive for whatever execution lay in store.) In short, a lictor was his master’s official torturer and the heavy bundle of stout rods, bound round a sharpened axe, which he carried everywhere, was a symbol of that grim authority. (This bundle, called the
fasces
, was the symbol chosen by Mussolini in the twentieth century, giving rise to the word ‘fascist’ in the present day.)

So – like the tax-collectors, who were universally despised – a retired lictor was not much welcomed in good society, unless of course he had important sponsors who must be appeased, or was (as he might well be) an Imperial spy. This story hinges on this fact, and the dilemma it poses for the important citizens of the colonia.

Most inhabitants of Glevum, however, were not citizens at all. Many were freemen, born outside the walls, scratching a more or less precarious living from a trade. Hundreds more were slaves – what Aristotle once described as ‘vocal tools’ – mere chattels of their masters, to be bought and sold, with no more rights or status than any other domestic animal. Some slaves led pitiable lives, but others were highly regarded by their owners, and might be treated well. Top-ranking slaves might even keep servants of their own – as the lictor’s steward in the story hopes to do – though often they proved unusually cruel as masters, it appears. However, a slave in a kindly household, assured of warmth and shelter and enough to eat, might have a more enviable lot than many a poor freeman struggling to eke out an existence in a squalid hut.

The rest of the Romano-British background to this book has been derived from a variety of (sometimes contradictory) pictorial and written sources, as well as artifacts. However, although I have done my best to create an accurate picture, this remains a work of fiction, and there is no claim to total academic authenticity. Commodus and Pertinax are historically attested, as is the existence and basic geography of Glevum. The rest is the product of my imagination. (Gaul was of course the Roman province which is now largely France, although it is not certain that there was a change of Provincial governor there just prior to this date, as the text suggests.)

Relata refero. Ne Iupiter quidem omnibus placet.
I only tell you what I heard. Jove himself can’t please everybody.

T
he man sat at the table on the bench and carefully spread out one last sheet of bark-paper. He glanced around once more to check that he was quite alone, but of course he had already made quite sure of that: the servants had long ago been sent off for the night. ‘Business matters to attend to,’ he had said. ‘Accounts to settle.’ In a fashion it was true.

He moved the oil-lamp closer so that he could see, and stirred the mixture of lamp-black, vinegar and gum arabic which he had ready, waiting in the bowl. He fingered the handsome seal-ring beside him on the desk, but there would be no seal or sealing-wax on this – that would not be appropriate for what he had in mind. He smiled; not a pleasant smile. He dipped his iron-nibbed pen into the ink and began to write:

To Voluus, the ex-lictor of the Governor of the Gallic provinces. I hear you have been looking for properties to buy in preparation for a move from Gaul. So, you hope to settle in Glevum after all? I guessed that you would come here in the end. Did you think you would escape? Fool! I warned you once, my friend, that I do not forget. Set one foot in Glevum after this and I promise you that neither you, nor your treasure nor your family will be safe. You may not see me, but I know where you are – just as surely as you know who I am.
He paused, and after a moment added with a scrawl,
Your secret enemy
.

He read it through again. Satisfied, he blew on it and scattered dust to dry the ink, then rolled it carefully into a tiny scroll, addressed it ‘to Voluus’, and tied it with a cord. Now, how should he proceed? One could not use one’s own slaves for a task like this. Tomorrow he would find an urchin on the street and have the note delivered to the
mansio
– Glevum’s official inn where Voluus had been staying for a day or two. Better still, have it pushed in through a window-space, so that the messenger could not be caught and questioned afterwards.

Seducing Destiny by Amelia Hutchins
Daddy Warlock by Jacqueline Diamond
The Plan by Qwen Salsbury
Singapore Swing by John Malathronas
Heidi by Johanna Spyri
Deadly Diamonds by John Dobbyn
Love Me: Oakville Series:Book 5 by Kathy-Jo Reinhart
The Butler Did It by Kasey Michaels
The Anatomy of Death by Felicity Young
The Millionaire's Unexpected Proposal (Entangled Indulgence) by Jane Peden
Our partner