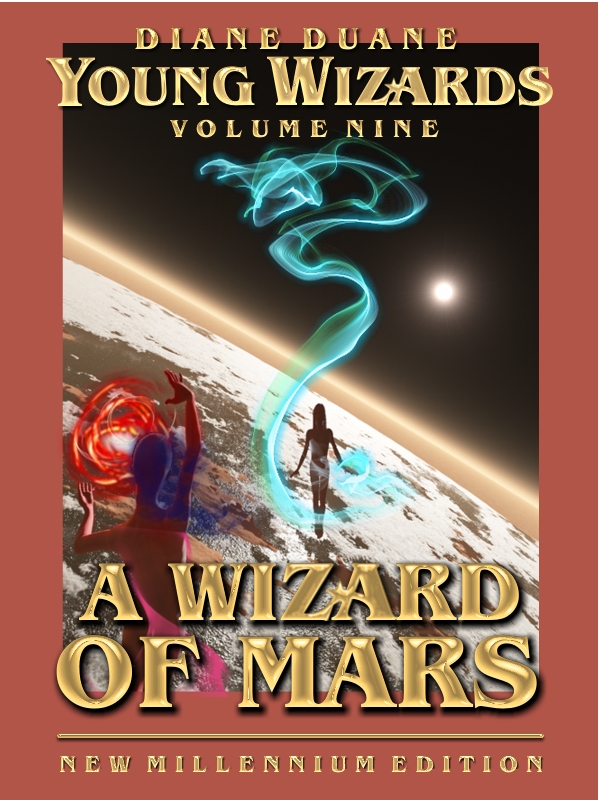 A Wizard of Mars

A Wizard of Mars

Requests for permission to make copies of any part of the work should be mailed to the following address:

For Kim and Ben and Greg

and Jules and ERB,

and, most affectionately, for Ray and Robert:

...because (one way or another)

we
are
all Martians:

— and for Peter Murray,

something he'd really have liked:

that pesky timeline, sorted at last

On kindling thus the Scorpion, his tail

Portending evil and his claws aflame?...

Why planets leave their paths and through the void

Fierce rabid war: the sword shall bear the rule...

The one departed | is the one who returns

From the straitened circle | and the shortened night,

When the blue star rises | and the water burns:

Then the word long-lost | comes again to light

To be spoke by the watcher | who silent yearns

For the lost one found. Yet to wreak aright,

She must slay her rival | and the First World spurn

Lest the one departed | no more return.

Truth is always late, always last to arrive, limping along with Time.

The problem,
Kit thought, scowling at the paper,
isn’t the basic shape, so much. It’s what to do with the legs...

He briefly glanced up from the pencil sketch he’d been doing in the margin of his notebook and looked wearily up at Mr. Machiavelli, his history teacher, as if he’d actually been paying attention to anything the Mack was saying. It was hard enough to care, this time of year.
One more week till school’s out. One more week!
— and especially late on a Friday afternoon, when the air-conditioning was broken.

Again!
Kit thought. He was sweltering, along with everyone else in the place. Only little, balding Mr. Mack, strolling back and forth in front of the blackboard and holding forth on Asian politics of the 50s, seemed untouched by the heat and humidity. He paused to write the word “Pyongyang” on the board, pausing in the middle of the process to stare at the word as if not sure of the spelling.

Oh, come on, Mack, give us a break: who cares about this stuff right now?!
But the Mack, as the whole class knew too well by now, was unstoppable; the heat slowed him down no more than cold or rain or dark of night probably would have. People names and place names and endless dates just kept on rolling out of him, and now he turned to the blackboard and started writing again...

Kit let out a sigh and glanced at the air vents at the back of the room. Cold air should have been coming out of them, but right now they were emitting nothing but an occasional faint clunking noise as somewhere in the system a feeder vent kept trying and failing to open. The school system was having budget troubles, which meant that some equipment that needed to be completely replaced wasn’t even getting maintenance. But knowing this didn’t make the heat any easier to bear.

People in the back of the room were fanning themselves with paperwork and notebooks. Kids sitting by the open windows were leaning toward them, courting any passing breath of air, and (when Mr. Machiavelli wasn’t looking) panting obviously, as if that would help. Without stopping what he was saying, Mr. Mack had paused to flip open a book on his desk and peer down at it: he shoved a bookmark into it and turned back to the blackboard, starting to write something else.
How can this not be bothering him when he’s got a whole suit on?
Kit thought.
Doesn’t he have sweat glands??

The cooling system clunked several times more, to no effect. Kit made a face, glanced at the clock. It seemed hopelessly stuck at twenty past two, and the class wasn’t going to let out until quarter of three...which from where Kit was sitting felt like at least a year away.
I can’t stand it anymore. And anyway, none of them’ll notice
—

Very quietly Kit reached down into the book bag beside his desk and pulled out his wizard’s manual. At the moment, the manual looked like his history textbook— which was perfectly normal, since earlier this year Kit had stuck a chameleon spell on the manual’s exterior, causing it to imitate the proper textbook for whatever class he happened to be in.

Kit turned idly through the manual’s pages to the one that held the spell he’d first crafted to do repairs on the school’s cooling system, back when it broke down during the unseasonal heat wave back in April. He’d had to use the spell several times since, and he’d had to rework it every time, because engineers from other schools kept coming over to work on the system— and every time they did, they disrupted whatever quick fix Kit had managed to implement the last time he’d done the fix-it spell.
Gotta get in here sometime during vacation and do a real fix on the whole system,
Kit thought.
Otherwise things’ll get even worse when the cold weather comes around...

The words of the spell, in the long, curved strokes and curlicue hooks-and-crooks of the wizardly Speech, laid themselves out before him on the manual page. Hovering above them, faint and hardly to be seen, was the shadow of the camouflage page that any casual, nonwizardly observer would see if he or she looked at the book.

There was of course no question of saying the spell out loud in a situation like this.
Gonna be kind of a strain doing it on the quiet,
Kit thought.
But this heat’s just too much. And what’s it like on the other side of the building, where the Sun’s hitting? The kids over there must be dying. Let’s just call this my good deed for the day.

He closed his eyes for a moment, working to make the requisite “quiet zone” inside his mind, and then opened his eyes again and started silently reading the words of the wizardry in the Speech. Slowly the wizardry started to work: a silence started to fall around Kit as the universe seemed to lean in around him, listening to the spell.

In the growing silence, Kit watched the room around him seem to fade, while the normally invisible layout of the cooling system now started to become visible, glowing like a wireframe diagram stretching out and away from the history classroom. Kit didn’t need to go hunting through the system to find the source of the problem. He knew where it was, and anyway, the locator functions of the spell would have shown him the duct near the heart of the building, just this side of the heat pump in the school’s engineering center.

Kit peered at the duct in his mind, concentrating on the source of the problem— a vent shutter that looked something like a small, boxy Venetian blind.

“Okay,” he said silently in the Speech. “What is it
this
time?”

The guy came again,
said the vent shutter buried deep in the duct
, and he tightened those bolts up too much...

“Said” was of course not the best way to put it— inanimate objects don’t communicate the way organic ones do— but to a wizard like Kit, who was good at communicating with such objects, the way the information passed was enough like talking and listening to think of it that way.

The wizardry showed Kit the bolts that the vent shutter meant: a series of them, up and down each side of it, fixing its shutter hinges to the inside of the duct. “Got it,” Kit said silently. “Okay, here we go—”

He turned his attention to the bolts. “Come on, guys, lighten up. You don’t need all that tension. Just let yourselves unwind...”

Half of wizardry was persuading people, creatures, or objects to do what you wanted them to. The rest of it was knowing what words in the Speech would get the intention across... and by now, Kit knew the words entirely too well. Slowly, the wizardry showed him the bolts loosening up one by one. “Not too much,” he said in his mind. “We don’t want the shutter to fall out. Yeah, that’s it... just like that.”

The last bolt rotated a quarter turn. “That’s the ticket,” Kit said in his mind. “That should do it. Thanks, guys.”

With one finger Kit traced a series of curves on the desk, the “unknotting” routine to undo the Wizard’s Knot that fastened most spells closed and started them working. The wizardry obediently unraveled: the glowing wireframe of the duct structure faded out as the classroom faded in around Kit again. And from far away in the building, echoing down the air vents that led into the room, Kit heard something go
clunk,
just once— the vent’s shutters, locking into the correct position. After a few moments, a breath of cooler air started sighing out of the vent.

Kit let out a breath of his own. It was tough to conceal the effects of doing a spell, even a minor one like this. He felt as if he’d just run up a few flights of stairs, and it was now taking some effort to keep his breathing regular. For the moment, all Kit could do was shut his manual and pick up his pencil, his hand shaking with a fine muscle tremor born of the brief exertion. But the air was cooling already.
Worth it,
Kit thought,
even for just twenty minutes...
He glanced again at the sketches in his notebook’s margin, the topmost of which showed a single slender tower rising from a forest of smaller ones, all surrounded by a barren, otherwordly landscape. The tower in particular was fuzzy around the edges, with erasures and redrawing: rendering architecture wasn’t Kit’s strong suit. But the figures he’d drawn farther down the page were better, especially the—

“Not too bad,” said a voice over his shoulder. “Better put some more clothes on her, though, or you’ll lose your PG-13 rating.”

Kit froze as the laughter of his classmates spread around the room.

Mr. Mack’s hand came down and picked up the notebook. “Actually, as regards the draftsmanship, not bad at all,” his history teacher said. “I’d rate her babe quotient at, oh, an eight or so. Make it eight-point-five for her, uh, attributes.” More snickering went around the class. Kit’s face went hot. “But as for the content...” Mr. Mack gave Kit a disapproving glance. “Not sure what it has to do with the aftermath of the Korean War...”

Bead-Dazzled by Olivia Bennett
No World of Their Own by Poul Anderson
The Broken Kingdom by Sarah Chapman
The Unexpected Marriage of Gabriel Stone (Lords of Disgrace) by Louise Allen
One Amazing Thing by Chitra Banerjee Divakaruni
03 - Death's Legacy by Sandy Mitchell - (ebook by Undead)
Lucien's Hell Bound Angel (Hell Bound Series) by Harris, Cyndi
The Finishing Touches by Browne, Hester
One Night Stand (The Complete Story) by Silver, Katie
Descent Into Dust by Jacqueline Lepore
Our partner