Read A Writer at War Online

A Writer at War 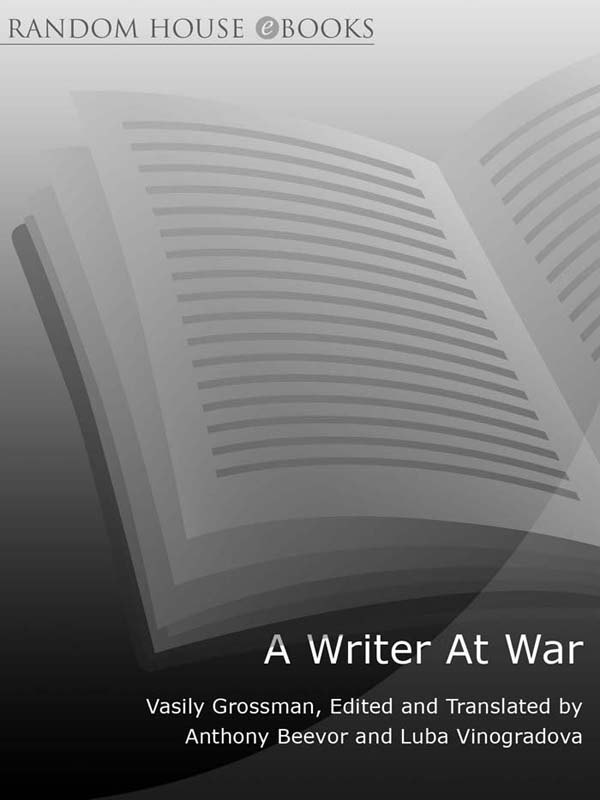 A Writer at War

EDITED AND TRANSLATED
BY

Published by The Harvill Press 2005

The moral right of Vasily Grossman to be identified as the author of this work has been asserted under the Copyright, Designs and Patents Act 1988

Papers used by Random House are natural, recyclable products made from wood grown in sustainable forests; the manufacturing processes conform to the environmental regulations of the country of origin

Also by Vasily Grossman in English

PART ONE
The Shock of Invasion 1941

2    The Terrible Retreat
August to September 1941

PART TWO
The Year of Stalingrad 1942

PART FOUR
From the Dnepr to the Vistula 1944

PART FIVE
Amid the Ruins of the Nazi World 1945

The Lies of Victory

Gomel and the Central Front,
August 1941

In the Donbass,
January to March 1942

Also by Vasily Grossman in English

Vasily Grossman’s place in the history of world literature is assured by his masterpiece
Life and Fate
, one of the greatest Russian novels of the twentieth century. Some critics even rate it more highly than Pasternak’s
Doctor Zhivago
or the novels of Solzhenitsyn.

This volume is based on his wartime notebooks, but also some essays which are all in the Russian State Archive for Literature and the Arts (RGALI). We have also included some letters in the possession of his daughter and step-son. The notebooks reveal a good deal of the raw material which he accumulated for his novels as well as his articles. Grossman, a special correspondent for the Red Army newspaper,
Krasnaya Zvezda
, or
Red Star
, proved to be the most perceptive and honest eyewitness of the Soviet frontlines between 1941 and 1945. He spent more than a thousand days at the front – nearly three out of the four years of war. The sharpness of his observation and the humanity of his understanding offer an invaluable lesson for any writer and historian.

Vasily Grossman was born in the Ukrainian town of Berdichev on 12 December 1905. Berdichev had one of the largest Jewish populations in central Europe and the Grossmans were part of its educated elite. Vasily had been given the name of Iosif, but like many assimilated families, the Grossmans russified their names. His father, born Solomon Iosifovich, had changed his to Semyon Osipovich.

Grossman’s parents separated and, as a young boy, he lived in Switzerland for two years with his mother before the First World War. In 1918, just after the revolution, he was back in Berdichev. The Ukraine and its rich agriculture was destroyed first by Field Marshal von Eichhorn’s German occupation, which stripped the countryside.
1
Then, as the German armies withdrew in November as revolution broke out at home, the Russian civil war began in earnest with fighting between White and Red Armies, while Ukrainian nationalists and anarchists resisted both
sides. Whites and nationalists, and in some cases Red Guards, vented their blind hatred with pogroms across the Ukraine. Some say that around 150,000 Jews, roughly a third of the Jewish population, were murdered during the civil war. Famine followed between 1920 and 1922, with hundreds of thousands of deaths in the Ukraine alone.

Grossman went to Moscow University in 1923 where he studied chemistry. Even at that early stage, the unmilitary Grossman demonstrated a fascination for the army. ‘
At first glance, Father
was a completely civilian person’, said his only child, Ekaterina Korotkova-Grossman. ‘One could see this immediately from the way he stooped and the way he wore his glasses. And his hands were so clumsy. [Yet] he first showed an interest in the army when he was still a student. He wrote in one letter that if he was not called up he would volunteer.’

In 1928, when only twenty-three and still a student, he married his girlfriend in Kiev, Anna Petrovna Matsuk, known as Galya. This relationship produced a daughter in January 1930. They called her Ekaterina, or Katya, after Grossman’s mother. In 1932, ten years after the civil war, an even worse man-made famine, provoked by Stalin’s campaign against the kulaks and the forced collectivisation of agriculture, killed over seven million people.
2
Parents crazed by hunger ate their own children. It was the epitome of what Osip Mandelstam described in a memorable poem as ‘
the wolfhound century
’. If Grossman did not witness the worst horrors of the famine, he certainly heard of them or saw the results, as skeletal figures begged beside railway tracks in the hope of a generous traveller throwing them a crust. He described this Ukrainian famine in his last novel,
Forever Flowing
, including the execution of a woman accused of eating her two children.

Fall From Grace by Zolendz, Christine
Ain't Bad for a Pink by Sandra Gibson
Valentine Babies (Holiday Babies Series) by Risk, Mona
Held (Gone #2) by Claflin, Stacy
After I Wake by Emma Griffiths
Highway To Hell by Alex Laybourne
Gordon Williams by The Siege of Trencher's Farm--Straw Dogs
After the Fine Weather by Michael Gilbert
Curio by Evangeline Denmark
Stricken (The War Scrolls Book 1) by A.K. Morgen
Our partner