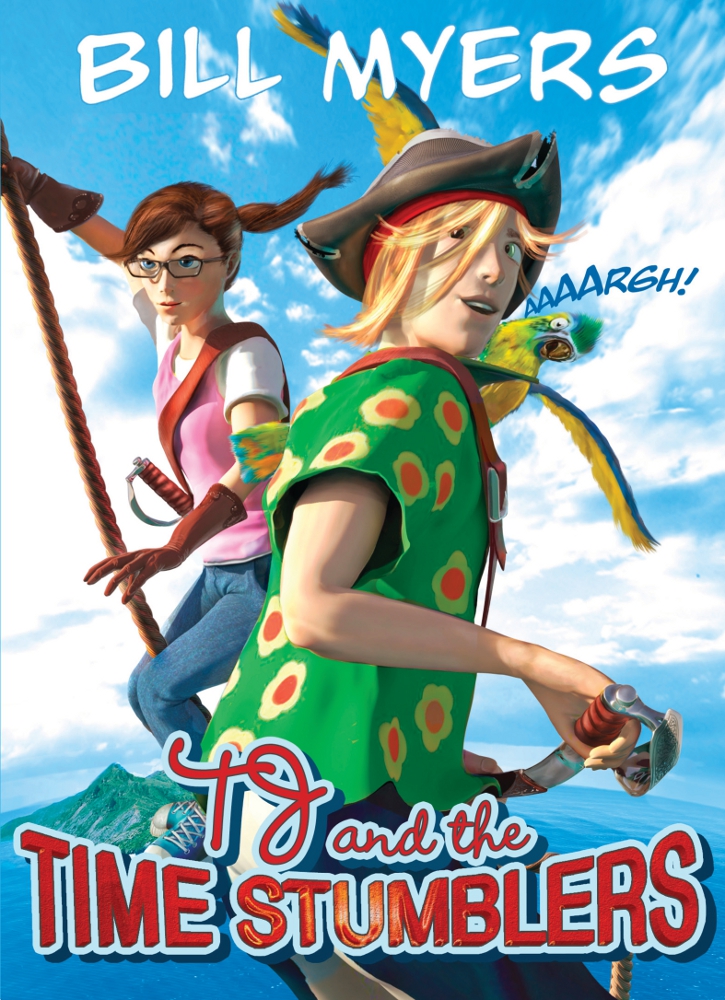 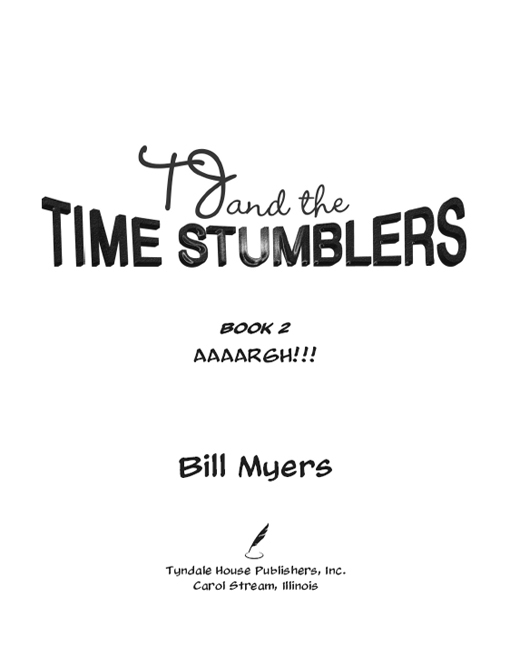 For the Kristi Toler-Harding family

Time-travel pod still zworked. Subject is growing used to our presence. She barely groans when she sees us. Big-time improvement. Currently assisting her in studies, though she doesn’t exactly appear grateful.

“WHAT ARE YOU DOING?!” TJ Finkelstein yelled as she dropped the book she was reading and jumped up from her desk. “HERBY!”

Now, TJ really wasn’t a yeller. But when your room is suddenly filled with two dozen pirates from the 1700s (and none of them are as cute as Johnny Depp), well, that’s enough to make anybody a little irritable.

Actually, it wasn’t the pirates that bothered TJ as much as their

And even that wasn’t as bad as their

falling down all wounded on her floor.

“Great!” she cried. “How am I going to get those bloodstains out of my carpet? HERBY!”

There was still no answer, except for the

of another pirate as he swung toward her on a rope.

She screamed and dropped to the floor as he flew past, missing her by inches. Scrambling back to her feet, she searched the room—ducking this sword, dodging that saber as the pirates continued to

Once again she shouted, “TUNA! HERBY! WHERE ARE YOU?!”

Suddenly two frightened heads popped out from under her bed. The good news was the heads were still attached to their bodies. (With all the swinging swords and sabers, that
was
good news.) The first belonged to Herby. He had long blond bangs and was not the brightest candle on the birthday cake. (Sometimes he couldn’t even find the party.) The second belonged to Tuna, who had red hair and was sort of chubby. They were both a couple years older than TJ and perfectly normal . . . except for the part about them coming from the 23rd century.

That’s right. And don’t worry about the shouting—that was TJ’s first reaction too. It was also her second reaction and her third . . . and her reaction every time she woke up in the morning to see them standing in line to use her bathroom. (Apparently even 23rd-century time travelers need to use the facilities.)

It seems she was the subject of their history project back at their school. Someday she would grow up to be a brilliant leader doing brilliant things (hard to believe, since she was still having a hard time opening her locker).

Anyway, the two boys had traveled back to her time to observe her.

The only problem was they got stuck. Their time-travel pod broke down and ran out of fuel. And until they could fix it, TJ Finkelstein had become their reluctant hostess. It wasn’t bad enough that she’d just moved to California from a small town in Missouri. Or that the kids at Malibu Junior High were the richest (and snobbiest) in the world. She also had to deal with all the catastrophes created by her brain-deprived friends from the 23rd century.

“What are you doing?” she demanded.

Tuna (aka Thomas Uriah Norman Alphonso the Third) cleared his throat. “You appeared to be having some difficulty with your
Treasure Island
book report.” “It’s due tomorrow, and I haven’t had a chance to—”

The boys ducked back under the bed and TJ jumped aside as two pirates rolled a heavy black cannon up to her window. She could only stare in disbelief.

Herby was the first to pop back out. Flipping his bangs to the side, he explained, “We figured the coolest way to read a book is to, like, live it.”

TJ glanced around. “You mean to
watch
it, like a movie.”

Suddenly a gnarled hand reached around and covered her mouth, while another shoved an old-fashioned pistol into her side. Her eyes widened in terror as she turned to see a pirate with a wooden leg and a parrot perched on his shoulder.

The pirate growled, “And who might ye be, missy? Someone out to steal me treasure?”

Of course TJ screamed: “Mmumoumrrmformmumrormf!” (Which might have sounded more like
“Excuse me, I’d appreciate not dying at this particular time in my life!”
if his hand weren’t still over her mouth.)

“Are you saying you wish for us to stop?” Tuna asked.

TJ glared at him.

“I think we should take that as a yes,” Herby said.

“Well, all right, if you’re certain.” Tuna pulled out a giant Swiss Army Knife (the type sold at time-travel stores everywhere). He opened the blade labeled Story Amplifier and

absolutely nothing happened. (Well, except for the cool sound.)

Tuna shut the blade and reopened it. Again, nothing happened, except for the still very cool

Meanwhile, one of the pirates with the cannon at the window shouted, “Stand by!”

His partner produced a giant wooden match and yelled, “Standing by!”

“Nuummmermumblemuffin!” she shouted. Only this time she made her point clearer by raising her foot high in the air and stomping hard onto the pirate’s one good foot.

“ARGH!” he shouted, letting her go and jumping up and down on his other foot (which, unfortunately, was not there). So, having only a peg for a foot, he did a lot more

onto the ground than jumping. And with all the
ker-plop-
ing came a lot more
“ARGH!”-
ings followed by a ton of
“Bleep-bleep-bleep, bleep-bleep-bleep”-
ings (which is all pirates are allowed to scream in a PG-rated book).

Meanwhile, the other two pirates were preparing to fire the cannon.

TJ raced to the window. “Don’t shoot! Don’t shoot!” She turned to the boys still under the bed. “Tuna! Herby! Do something!”

“As you have no doubt observed,” Tuna explained, “our equipment is once again experiencing technical difficulties.”

“Ready!” the second pirate echoed his partner’s command as he struck the giant match. But before he could light the cannon’s fuse, TJ spun around and blew it out.

Dark World: Into the Shadows with the Lead Investigator of the Ghost Adventures Crew by Crigger, Kelly, Bagans, Zak
Here Come the Dogs by Omar Musa
A Cruise to Die For (An Alix London Mystery) by Elkins, Aaron, Elkins, Charlotte
Murder Most Austen by Tracy Kiely
Voices by Ursula K. Le Guin
The Proposal by Mary Balogh
Chimes of Passion by Joe Mudak
Thief's Covenant (A Widdershins Adventure) by Marmell, Ari
Nightmare Country by Marlys Millhiser
This Thing Called the Future by J.L. Powers
Our partner