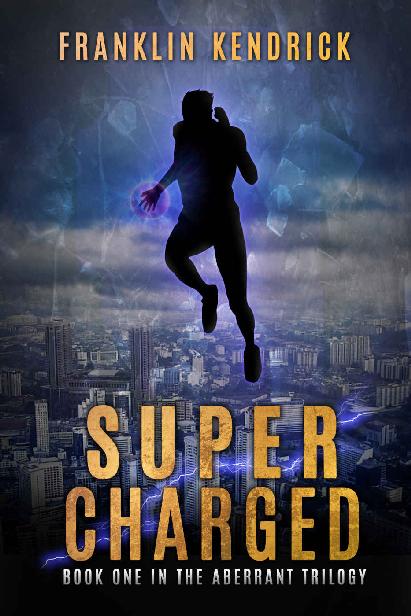 Book One in The Aberrant Trilogy

No part of this eBook may be copied in any form without permission of the author.

All characters, places, and events in this book are fictional. Any resemblance to real people or places, living, dead, or super heroic is strictly coincidental, or are used fictitiously.

The
Can You Survive?
Series

The Zombie Apocalypse (Can You Survive?)

The Zombie Cruise (Can You Survive?)

A Haunting on Commercial Street

A star-shaped medallion of unknown origin that bestows upon its owner superhuman abilities.

Though multiple powers may be granted, the variety of powers differs from person to person.

Loss of the Vestige eliminates the holder’s powers until the medallion is acquired once more.

A person with superhuman abilities.

The holder of the Vestige.

I can already hear your voices.

Super Guy?
you say.
What kind of a name is Super Guy?

I know. It sounds stupid. And the idea itself was, admittedly, pretty stupid when it came out. A kid who wears tights, flying around and electrocuting his enemies? That’s a whole lot of extending your disbelief right there.

But, for some reason, the
Super Guy
series took off. My father didn’t expect it. Believe me, he said he was humbled every time that a reporter asked him if he predicted his success. He would always say that it was divine intervention.

As for the idea, it just came to him like a lightning strike - pun intended. Yeah, my father was a real joker. Mom says I get my adventurous side from him.

So, what is he doing now?

Well, I bet you expect me to say that he’s guiding me to follow in his footsteps, teaching me how to sketch out panels and use tablets for inking and coloring. Fatherly stuff.

“Shaun, I really don’t think that you should be doing this.”

I stop dead in my tracks across the linoleum-lined corridor at East Boston High School and turn to see Mae Williams following me. Her layered black hair falls partially over one of her eyes and she brushes it away to fix a demanding stare at me.

She crosses her arms.

“Exactly. And
you’re
not supposed to be up here, either.”

She has followed me up onto the third floor of the building. I can’t blame her for caring, but I’m being cautious. There’s a hall pass tucked into my pocket in case I need it, and if I happen to run into a teacher who asks too many questions, I can just say that I’m making a loop around the school.

“Nobody’s going to catch me,” I tell Mae. “Unless you say something. But, I don’t think you will.”

She turns and heads back to the staircase, leaving me alone once more.

I should listen to her. She usually gives me good advice. But, this time I’m doing what I want.

I continue on down the corridor, my thoughts returning to my father.

I don’t want to say that I blame his comic books for everything that has happened.

Dad was in pretty high demand last year. Mom told me that it was a good thing. I definitely was enjoying all the attention because it meant that I got to travel with Dad to conventions. I got to go behind the scenes, skip the lines at comic cons, and meet really cool people who also drew comics like my dad. Most of them were inspired by him growing up. Some of them were my favorites. They all gave Dad the greatest praise.

But, Dad got to be really popular when the movie rights were sold. That was something that he never thought would happen. A live-action adaptation of something that he wrote and drew in his mother’s basement? It was unreal.

Needless to say, he was making plenty of trips back and forth between Boston, where we live, and LA. That meant flying. It was the fastest way to get around, and it allowed him to be home most of the time.

I didn’t mind it. He was always on time.

The last time that Dad said goodbye to me was a year and three days ago. He had to leave early in the morning to arrive for check-in at the airport, so he did what he always did. He came into my room to say goodbye. He lingered a little bit longer than he usually did, almost like he knew something bad was going to happen. He made sure to mention my homework - a particularly boring presentation on conductivity for science class that was half-pasted on one of those cardboard tri-folds in the corner - and ruffled my hair before heading for the door and giving me one last look before walking out.

I told him that I loved him.

He smiled and said, “Back at you, kid.” His catchphrase.

Then he was gone.

His plane crashed on the way to the studio.

They said in the reports that his death was instantaneous. That he didn’t feel anything. There was no suffering.

It might have been true for him, but it certainly wasn’t true for us.

Mom hasn’t been the same since. She used to take an active interest in my life, always bringing me to events and making sure that I did things outside of my studies. Now she hardly asks about those things. She mostly just goes to work and then comes home.

As for me, I would be lying if I told you that I was taking the loss of my father well. Sure, I probably look like I am on the outside, but on the inside I feel this horrible sensation that a piece of myself missing. Like there’s a hole in my gut or something.

Nobody sees me as I come to the steel door on the third floor leading to the roof of the school. A padlock keeps the door from being opened by any unauthorized personnel, but that isn’t going to stop me. It’s my lunch break so nobody should be looking for me. In one hand is my iPhone and in the other is a small pin.

I use the pin to pick the lock. After a minute or two I hear the
click
and the lock snaps open.

With one last look around I see that the coast is clear and I push open the door and walk up the steel stairs, stepping out onto the roof.

The wind is strong up here. That will make it hard for the microphone to pick up my voice, but I’ll make sure to talk extra loud. My viewers won’t mind. They’ve seen me in worse conditions before.

But, this video is going to be the best one I ever make.

I have a Youtube channel devoted to my vlog. I started it after Dad died. Call it my coping mechanism. Each video is addressed to my viewers, and also to my father, and with each one I have gone higher and higher, taking greater risks. One time I did a video at the top of a water tower. That one didn’t end well, hence Mae trying to stop me a moment ago. I was caught that time because the water tower was so visible.

However, this time nobody should spot me.

I make my way around air conditioning units and exhaust pipes until I am near the edge of the roof. A short brick wall is all that separates me from the empty space above the parking lot. Beyond that I can see the tall buildings of Boston rising up into the sky like great monoliths.

I sigh. At last I am truly alone.

I unlock my phone and launch the video app, aiming the phone’s lens at my face. I make sure to have the cityscape behind me.

Then I start recording.

I don’t get very far in my spiel because suddenly I hear commotion down below. It sounds like people making loud exclamations. Against my better judgment, I lean over the short wall and see a small group of people pointing up at me.

“Great,” I mutter. I’ve been spotted already. I thought I was being cautious.

Someone farther back must have seen me.

“I have to cut this short, unfortunately,” I say into my phone. “But, let it be known that I managed to make it up onto the roof of the high school. Take that.”

I click the red button on the screen and go to put my phone away when I am stopped in my tracks. I hear the sound of the security door creaking open and then footsteps coming around the air conditioning unit.

My stomach sinks as I see a security guard come out onto the rooftop.

“Hey, buddy,” he starts, his hands held palms out towards me. “Don’t get any bright ideas.”

Bright ideas?
I think.
This
was
my bright idea. Now it’s just a mess.

I wish I could fly away from here right now. I only meant to be out here for a few minutes to film my video. Now I’ve got an audience down below on the sidewalk and authorities thinking that I’m going to jump.

The security guard comes closer and a second one follows behind him. They creep closer and closer.

I try to surrender, glancing over my shoulder at the group of spectators below, but they don’t give me a chance. One guard tackles me around the middle and wrestles me to the ground. I lose my grip on my phone and it goes flying over the edge of the roof. The second guard joins the fray.

They are surprisingly rough with me, pinning my hands behind my back.

“I’m not struggling!” I say to get them to ease up on me, but it makes no difference.

They lift me to my feet and force me back to the doorway. Once inside I see that there is also a small crowd of classmates assembled, watching me with curious stares. Mae is among them, though I know that she isn’t the one who told on me. I know because she looks like she wants to say something, to defend me, but I shake my head. It’s best if she stays out of this. It’s my mess now.