If you enjoyed this novel and want to let me know, please click those fantastic little stars on the ebook retailer’s website! I see every one of them and do a little disco dance when they’re good. Now, if you read this and hated it, please blame my mother. She’s the one who keeps making me write. She can be reached at
[email protected]
. She’ll be the first to tell you…
if you have nothing nice to say, then you just might need a hug!

Valjeanne Jeffers for helping with the final typo-control and words of encouragement. Thank you!

You awesome people who bought a book from me! (I hope I got you to laugh?)

The fabulous people who posted reviews and gave me those happy little stars or sent emails! (You know who you are! You’re soooo cool!) 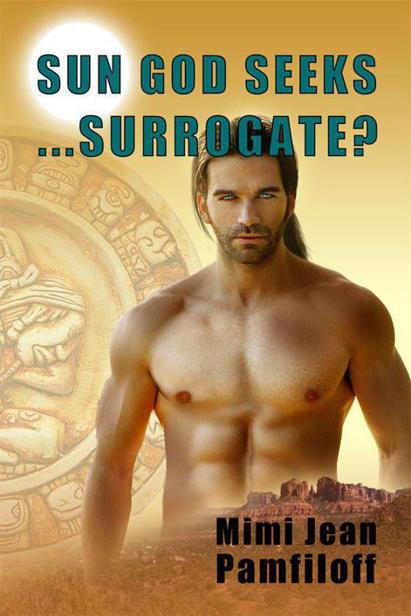 Book Three of the Accidentally Yours Series

Twenty-four-year-old Penelope finds herself in all sorts of hot water, vaporous and otherwise, after agreeing to become a surrogate for an eccentric, wealthy, and devastatingly handsome man who isn’t exactly a man.

(In No Particular Order Because Cimil Said So)

Yum Cimil
– Goddess of the Underworld, also known as Ah-Puch by the Mayans, Mictlantecuhtli (try saying that one ten times) by the Aztecs, Grim Reaper by the Europeans, Hades by the Greeks…you get the picture! Despite what people say, Cimil is actually a female, adores a good bargain (especially garage sales) and the color pink and has the ability to see all possible outcomes of the future. She’s also bat-shit crazy.

Cenote –
Limestone sinkholes connected to a subterranean water system. They are found in Central America and southern Mexico and were once believed by the Mayans to be sacred portals to the afterlife. Such smart humans! They were right. Except, cenotes are actually portals to the realm of the gods.

(If you have never seen a cenote, do a quick search on the Internet “cenote photos” and you’ll see how freaking cool they are!)

The Pact
– An agreement between the gods and good vampires which dictates the Do’s and Don’ts. There are many parts to it, but the most important rules are: vampires are not allowed to snack on good people (called Forbiddens), must keep their existence a secret, and are responsible for keeping any rouge vampires in check.

Obscuros
– Evil vampires who do not live by the Pact and like to dine on innocent humans since they really do taste the best.

K’ak
– The history books remember him as K'ak Tiliw Chan Yopaat, ruler of Copan in the 700 AD’s. Really, King K’ak (Don’t you just love that name? Tee hee hee…) is one of Cimil’s favorite brothers. We’re not really sure what he does.

Kinich
– Also known by many other names depending on the culture, Kinich is the Sun God. He likes to go by “Nick” these days, but don’t let the modern name fool you. He’s not so hot about the gods mingling with humans. Although…he’s getting a little curious what the fuss is all about. Can sleeping with a woman really be all that?

Votan
– God of Death and War. Also known as Odin, Wotan, Wodan, the God of Drums (he has no idea how the hell he got that title; he hates the drums) and of Multiplication (Okay, he is pretty darn good at math so that one makes sense.) These days, Votan goes by Guy Santiago (it’s a long story—read Book #1), but despite his deadly tendencies, he’s all heart. He’s now married to Emma Keane.

Chaam
– The God of Male Virility. He’s responsible for discovering black jade, figuring out how to procreate with humans, and kicking off the chain of events that will eventually lead to the Great War. Get your Funyuns and beer! This is gonna be good.

Black Jade
– Found only in a particular mine located in Southern Mexico, this jade has very special supernatural properties, including the ability to absorb supernatural energy, in particular, god energy. When worn by a human it is possible for them to have physical contact with a god. If injected, it can make a person addicted to doing bad things. If the jade is fueled up with dark energy then released, it can be used as a weapon. Chaam personally likes using it to polish his teeth.

Payal
– Though the gods can take humans to their realm and make them immortal, Payals are the true genetic offspring of the gods but are born mortal just like their human mothers. Only first-born children inherit the gods’ genes and manifest their traits. If the first-born happens to be female, she is called a Payal. If male, well…then you get something kind of yucky!

Maaskab
– Originally a cult of bloodthirsty Mayan priests who believed in the dark arts. It is rumored they are responsible for bringing down their entire civilization with their obsession for human sacrifices (mainly young female virgins). Once Chaam started making half-human children, he decided all first-born males would make excellent Maaskab due to their proclivity for evil.

Uchben
– An ancient society of scholars and warriors who serve as the gods’ eyes and ears in the human world. They also do the books and manage their earthly assets.

Book of the Oracle of Delphi
– This living ancient text tells the future. But as events unfold, the pages rewrite themselves. Currently, the good vampires are in possession of this text.

The Gods
– Though every culture around the world has their own names and beliefs related to beings of worship, there are actually only fourteen. And since they are only able to access the human world through the portals in Yucatan region, the Mayans were big fans.

The gods often refer to each other as brother and sister, but truth is, they are just another species of the Creator.

Demilords
– (Spoiler alert for Book #2—yes, this book!) This group of immortal bad asses are vampires who’ve been infused with the light of the gods. They are extremely difficult to kill and hate their jobs (killing Obscuros) almost as much as they hate the gods who control them.

Before taking up a permanent residence in the San Francisco Bay Area, Mimi spent time living near NYC (became a shopaholic), in Mexico City (developed a taste for very spicy food), and Arizona (now hates jumping chollas but pines for sherbet sunsets). Her love of pre-Hispanic culture, big cities, and romance inspires her to write when she’s not busy with kids, work, and life…or getting sucked into a juicy novel.

She hopes that someday leather pants for men will make a big comeback and that her writing might make you laugh when you need it most.

The Centaur by John Updike
The Sleeping Sands by Nat Edwards
Scrapbook of the Dead by Mollie Cox Bryan
Now You See Me-Gifted 5 by Marilyn Kaye
In the Company of Ghosts by Stephen A Hunt
Murder Is Easy by Agatha Christie
Spitfire Girl by Jackie Moggridge
Costume Not Included by Matthew Hughes
Belle De Jour by Joseph Kessel
The Battle for the Ringed Planet by Johnson, Richard Edmond
Our partner