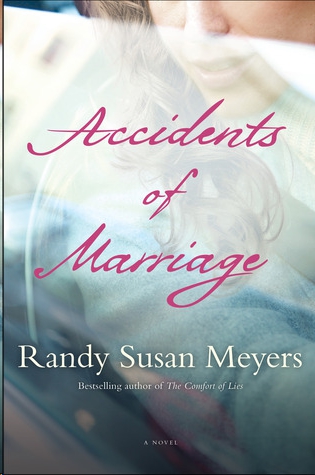 To Jeff, who makes it possible

There have been two great accidents in my life. One was the trolley, and the other was Diego. Diego was by far the worst.

Maddy ran her tongue over her teeth, imagining the bitter taste of a crumbling tablet of Xanax. After a gut-wrenching day at the hospital nothing tempted her more than a chemical vacation. Nothing appealed to her less than cooking supper. Churning stomach acid—courtesy of work—coupled with anxiety that Ben might come home as frenzied as he’d left made a formidable appetite killer.

She could bottle it and make a fortune.

Each morning she spun the wheel on the Ben chart, hoping the arrow would hit
happy husband
, or at least
neutral guy
. Today his arrow landed on
total bastard
, holding her personally responsible for Caleb’s tantrum, which—oh, horror!—had cost Ben twenty minutes of work.

She considered taking a pill, but the rites of family happiness demanded her attention. Gracie and Caleb sprawled on the rug, recovering from their day at camp: seven-year-old Caleb, half asleep, rubbing his cheek with his thumb; nine-year-old Gracie’s glazed eyes fixed on the television. Emma, her oldest, a day camp counselor at fourteen, would be home soon.

Indestructible fabric, the sort bought by parents with children prone to transferring their sticky snacks to the upholstery, prickled against her bare arms. She lusted for air-conditioning as she’d once longed for peace, justice, and her husband. Each suffocating Boston summer in their badly wired Victorian became more hateful and Ben’s warnings about global warming swayed her less. According to Ben, her environmental ethics turned situational with each drop of perspiration.

Pressing the small of her back didn’t ease the permanent knot lodged deep and low, nor did shoving a small hard pillow against it. Her stomach growled despite her lack of desire for food.

Fish sticks would be easy, but she couldn’t bear turning on the oven.

The back door slammed. Emma banged her backpack on the table. Her daughter’s way of saying
I’m home
.

Maddy struggled up from the couch and headed toward the kitchen. “Just making sure it’s you.”

“Were you expecting someone else?” she asked.

“It could have been Daddy.”

“Right.” What an all-purpose word
right
had become in their family, their polite way of saying,
I am acknowledging you have spoken, but am choosing not to engage in any meaningful way.
Lately, they used it all too often.

Newspapers they’d tried to read at breakfast covered half the table. Emma stared into the refrigerator as Maddy gathered the papers, unsure whether to recycle them. Had Ben finished reading the
Boston Globe
? The
New York Times
?

The sound of breaking glass followed by Caleb’s scream interrupted
before Emma could specify just how superior a shopper Caro’s mother was.

Emma followed as Maddy ran to the living room.

“Jesus, what happened?” Maddy crouched next to Caleb, her stomach dropping at the sight of blood pouring from his foot. Shards of glass surrounded him, liquid droplets of milk clinging to the pieces, a larger white puddle pooling on the wooden floor. She grabbed a wadded-up napkin to staunch the blood, crouching awkwardly to avoid cutting her knees.

Gracie’s mouth trembled. “I just got up, that’s all, and I knocked over his milk glass. He got mad and screamed, then he stood up and kicked the glass and it broke. He stepped on it. It wasn’t my fault!”

“It’s okay, Gracie.” Blood soaked through the napkin, dissolving the paper as she exerted pressure. “Emma, get me a damp towel.”

This was preventable,
Ben would say.
This is why we have plastic glasses.

“Make it stop, Mommy!” Tears cut through the dirt on Caleb’s cheeks.

She pressed harder. Gracie mopped the spilled milk with a dirty T-shirt from her backpack.

“You need to wring it out, Emma. Never mind, just get a clean one.”

Emma stomped out with Gracie in her wake. Wet cloth slapped in the sink.

“Give this to Mom.” Emma’s voice from the kitchen was extra loud.

Using the hem of her black cotton skirt, Maddy covered the napkin. Gracie returned with a new towel. Emma watched from the doorway, twirling the bottom of her long brown braid.

Maddy peeled away her skirt and replaced it with the towel, Caleb whimpering. “Do I have to go to the doctor?” He squinted as she peeked under the towel.

“It doesn’t look too deep, but it has to be cleaned,” she said. “I don’t think we need a doctor.” Maddy’s pulse calmed. She stopped rushing ahead in her mind: wrapping Caleb’s foot safely enough to hold in
the bleeding until they got to the emergency room, packing the kids in the car, calling Ben. She looked again—making sure her decision was based on wisdom and not wishful thinking. It wasn’t gaping. The bleeding had slowed.

He tried to pull his foot away. “No! No cleaning. It’ll hurt.”

Emma squatted next to them. “You let Mom wash out the cut and I’ll play Monopoly.” Caleb’s smile came through like a sun shower.

“That’s sweet, honey.” Maddy should appreciate Emma’s goodness and stop losing patience with her sulks and eye rolling. “Thank you.”

“Can I play?” Gracie asked.

Gracie’s lip quivered at her brother’s words, leaving Maddy torn between soothing and yelling
Stop it
, especially when she saw Gracie make the tiny sign of the cross she’d picked up from Grandma Frances, Ben’s mother, a woman given to reflexive ritual blessings. Gracie’s gesture unsettled Maddy. Next thing she knew, her daughter would be genuflecting at Our Lady of the Virgins. Buying her a Jewish star or a Unitarian flaming chalice, before Grandma Frances hung a crucifix over Gracie’s bed, went on her to-do list. Mixed marriage only went so far.

“Monopoly is better with more people, Caleb.” Pregnant women should be required to take classes in referee and negotiation skills along with breathing and panting lessons.

Gracie pulled at her camp-grimy toes. “How about you and I make chocolate sauce while they play?” Maddy suggested. “We could have hot fudge sundaes for supper.”

“Ice cream for supper?” Gracie raised her chin off her knees.

“Why not?” She pushed back her daughter’s sweaty black curls, the only visible part of Maddy that Gracie had inherited. The kids divided their parents’ parts and shared few: Skinny Caleb had Ben’s thick brown hair, Maddy’s long lashes and narrow shoulders. Poor Gracie, like Ben, would have to fight a tendency toward getting thick in the middle. Emma, wiry like Maddy, had her father’s sharp cheekbones.

A child leaned on either shoulder. With feet propped on the coffee table, Maddy drifted in and out of sleep. Dirty bowls decorated with blobs of hardened fudge littered the room. After cresting to a quick high of giggles over supper, they’d slumped into queasy sugar comas.

They stirred at the sound effects of Ben’s nightly return: the car rolling on gravel. Scrape of heat-swollen door opening. Keys dropping on the hall table. Briefcase thudding to the floor. Sighs of relief or disgust indicated his mood level. Despite their early-morning fight, Ben sounded audibly benign. Thank God. Maybe it would be a Swiss night, with the living room their first neutral zone.

Ben entered the living room and surveyed their collapsed bodies and the scattered Monopoly pieces. Gracie pulled away and ran to him, throwing her hands around his waist. He stroked her black ringlets into a little bundle at the back of her head as she leaned into his slightly softening middle. He had the body of a forty-three-year-old man who fought gravity by playing handball twice a week, but who’d given up crunches. Not bad, but unlike Maddy, who ran and used free weights and the rowing machine in their basement, his battle against time brought fewer visible rewards.

“What happened?” he asked. “It looks like a war zone.”

“We had some excitement. Our boy cut himself.”

Caleb held out his bandage-swathed foot while still staring at the television.

“You okay?” Ben asked. He gave Gracie one last pat and went to the couch. “Hurt much?”

Caleb shrugged. “I guess. A little.” He studied Maddy as though seeking the right answer.

Ben laid a hand on Caleb’s calf. “Can you walk on it?”

“It’s on the ball of his foot. The inside,” Maddy said.

“How’d it happen?” Ben tugged on his chin—his poker tell that steam could build at any moment.

Maddy leaned over Caleb and kissed her husband, hitting the side of his mouth he offered. “Forgetting anything?” she asked. “
Hello, Maddy? How are you?
”

Kissing was starting?
It is when you’re being sarcastic,
she answered herself, using Ben’s lecture voice. “He fell asleep and then got up without remembering there was a milk glass next to him. It was an accident.” She knew the lie was barely plausible, but she also knew it was just enough for him to avoid being prosecutorial.

“Where was he sleeping? The recycle bin?”

“Very funny. A glass broke. End of story.” There. The truth snuck in.

“Why can’t the kids eat and drink at the table like they’re supposed to? Why weren’t they using plastic glasses?” He ran his hands through his hair. “Look at this place. It’s a mess. No wonder everyone’s always having accidents.”

Caleb rubbed his thumb back and forth across his knee. Gracie crossed herself.

“Not now, okay? Please.” She sent him a significant look.

Ben flexed his shoulders, leaned back on the couch, and stared at the ceiling. He took a deep breath, seeming to remember the anger management sheet Maddy had forced on him six months ago, after he’d thrown a shoe.
At the wall,
he insisted each time she mentioned the incident.
Not at you.
But her message had landed. For once, she’d broken through his endless rejections of her careful observations about his temper.

Good thing. She’d gritted her teeth through his rages, but she’d be damned if their house became a physical battleground. He’d scared himself when he’d thrown the shoe—just as he had years before when he’d thrown a bottle of detergent against the wall. The difference was this time he’d listened to her. He’d read the sheet despite hating it when she supposedly social-worked him.
Save it for your clients,
he’d yell when she deconstructed him. The children. Their marriage.
You’re not my shrink, you’re my wife.

If he didn’t want her to social-work him, then she sure wished he’d learn to manage his own moods. Maddy’s sister insisted that one day it would be too late for anger prevention sheets and other tricks. Vanessa had no patience for Ben’s rages, but Maddy blamed herself for the antagonism her family felt toward Ben. Maddy overshared. Everything negative, anyway. When had she last called her sister to say things were going great? To brag about Ben taking an entire day to make sure Gracie could ride her bike safely? How often did she mention that Ben took the kids to the movies while she went for a massage?

At least her mother pretended to love Ben. For which Maddy was grateful.

“We had ice cream for supper,” Caleb announced.