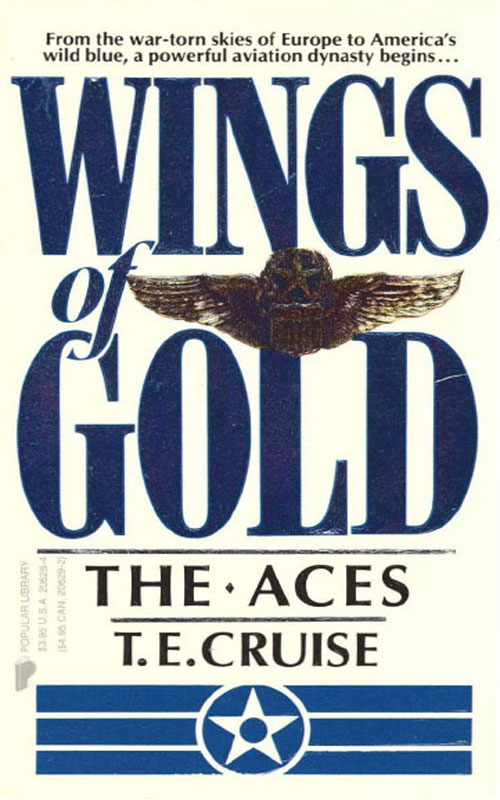 They spanned the heavens above—
and dominated the earth below
…

Herman Gold.
He wasn’t meant to till the earth. He was meant to soar like an eagle. He built an empire of the air. And it shone with the
name Gold Aviation.

Steven Gold.
A fighting flyer ace who amassed kill after kill against the Japanese as one of the legendary Flying Tigers. He was his father’s
true heir—and bitterest rival.

Susan Gold.
Passionate, rebellious, she felt the bloodline of a dynasty in her veins. She defiantly fell in love with a flying man—and,
in the fires of war, made the ultimate sacrifice.

Tim Campbell.
As a young banker, his early faith in Herman Gold led to a pact that made his fortune. Then came the decisive showdown with
Gold that only cunning could win.

Blaize Green.
The dashing aristocrat feared only one thing—the intimate touch of the woman he loved. When a new war came, he racked up
an ace’s score —until his luck gave out.

Popular Library books are published by

They spanned the heavens aboveand dominated the earth below…

Emperors of the Air

PROPHECIES VICTORY FOR THE FATHERLAND

The Imperial Second, Seventh, Seventeenth, and Eighteenth Armies, led by the Kaiser’s Hammer General Ludendorff, have made
spectacular gains against the British between Arras and the Oise River, along the Somme.

Operation Michael began on 21 March, when over six thousand artillery cannons devastated the British trenches with gas and
explosives. The heroic Prussian Fist of our advancing infantry met little resistance as it confronted and crushed the paralyzed
British Third and Fifth Armies, thanks, in part, to lightning advance strafing and bombing runs executed by the Infantreiflieger
Schlastas.

Top cover for the operation was supplied by Jagdgeschwader 1, led by the national hero, Der röte Kampfflieger, Rettmeister
Manfred von Richthofen. High above the noise and smoke-filled valley of the Somme the majestic, scarlet-tinged Jastas of J.G.
1 cleared the skies of Allied fighters in grand, cartwheeling dogfights.

Germans rejoice! Victory is within sight!

Sergeant Hermann Goldstein scanned the lead article of the tattered issue of
The Soldier’s Friend
as he waited in the ready room for an orderly to bring him his flight gear. When his gear arrived, Goldstein set the newspaper
aside and pulled his tan, fur-lined flight coverall over his field uniform. The other pilots had strapped on sidearms, but
Goldstein didn’t wear one. He was a terrible pistol shot. His airplane was his weapon.

He put on his fur-lined flying boots, gloves, and his well-worn, cordovan leather helmet. He shrugged into his leather safety
harness and grabbed his flight goggles. At the moment he was sweating, but at 6,000 meters the frigid wind would cut like
a wire whip through the layers of protective clothing. He tore the front page off the Ministry of Propaganda rag he’d been
reading, crumpled it, and used the “Grand Prophecies of Victories” to polish the lenses of his goggles as he left the ready
room. At least he was putting the scrap to a far more honorable end than its mates would find in the latrine.

Outside, the sky was blue, broken by banks of puffy gray cumulus clouds. It was cool enough to dry the sweat on Goldstein’s
face. He let the balled newspaper scrap flutter away in the brisk April wind that buffeted the fourteen-color-splashed Fokker
Dr. I triplanes on the muddy ready line.

Each pilot had his airplane painted according to his own taste. The Herr Rittmeister Richthofen’s solid red triplane was glorious,
but Goldstein thought his own gaudy Fokker “tripe” was the prettiest of all the scouts in Herr Cavalry Captain Richthofen’s
Hunting Echelon. Like all the fighters that belonged to Richthofen’s J.G. 1, Goldstein’s machine bore Herr Rittmeister’s trademark
scarlet hue everywhere but on the sides of its fuselage and its wings, where it was painted sky blue. On both rear side quarters
were large, bright yellow ovals, each showing a centaur—a mythological creature, half man and half horse—rearing up to do
battle. Just forward of the centaurs, and on her wings and tail, she wore black Iron Crosses, edged in white.

Goldstein swung himself up and into his Fokker’s worn bucket seat, buckled himself in, and then signaled to his ground crew
that he was ready to start his engine. All around Goldstein was the sputter and roar of the other Fokkers as their engines
caught.

Goldstein checked that his machine’s gas and air valves were full open and that its ignition switch was off; then he watched
as his chief mechanic, Corporal Heiner Froehlig, began to swing his machine’s propeller. Normally it took two men to turn
the prop. But Froehlig, a stout, balding, middle-aged man with a walrus moustache, prided himself on having the strength to
do it by himself.

As the mechanic cranked the prop, Goldstein gradually cut off his Fokker’s air valve until the engine had sucked in enough
gas.

“Contact!” the mechanic shouted, peering at Goldstein from around the side of the Fokker’s nose.

“Contact!” Goldstein yelled back, and flicked on the ignition with his gloved finger.

The mechanic gave one final heave on the prop and quickly retreated. The engine coughed to life in a smelly blue cloud of
burnt castor oil. The Fokker’s mahogany prop picked up speed and whirled itself into a blur.

Goldstein scanned his four instruments: gas and oil gauges; a tachometer and a compass. He settled his left hand on the throttle
and his right on the control stick, and waited. It would be a few minutes before it was his turn to taxi off the ready line.

He killed time by wiggling the stick and kicking the rudder bar to make sure his ailerons and rudder were working. He knew
they were. Every morning he performed a maintenance check on his machine. Goldstein knew that it irked the mechanics to have
him double-checking their work, but he liked to spend time tinkering with his machine. Sometimes when he was done working,
he would just sit in the plane for the sheer enjoyment of it.

The Fokker was so graceful and powerful. It was everything that he was not.

Goldstein was nineteen and a half years old. He had freckles, light blue eyes, not much of a beard (he had to shave only twice
a week), and close-cropped rust-colored hair that had already begun to recede from his high forehead. He was tall to be a
flier, almost too tall to fold himself into the cramped cockpit of his fighter scout, but he was also very thin, and that
was good. The lighter the sum total of man and flying machine, the higher the ceiling the partnership could achieve. Greater
altitude translated into tactical advantage in battle flying.

To stay skin and bones, Goldstein dieted and abstained from alcohol. The Fokker Dr. I had a fast rate of climb and excellent
maneuverability, but a mediocre top speed and service ceiling. By keeping his own weight down, and making a few modifications
to his machine’s 110-horsepower, Oberursel nine-cylinder rotary engine, Goldstein was able to both increase his speed and
coax extra altitude out of his Fokker.

He was elated to be among those chosen for today’s patrol. For the past week fog and wind-driven rain had grounded all flights,
making everyone restless and edgy. “Pilot’s Sunshine” they liked to call the bad weather at other aerodromes, because when
flying conditions were impossible a pilot could drink too much and then sleep late the next morning. That was not the way
it was at J.G. 1, where the pilots were always eager for a scrape to increase their scores. If a pilot wasn’t that way, the
Herr Rittmeister shipped him right out.

This afternoon at lunch it was announced that the Weather Service had forecast clearing skies by late afternoon. “If there
is enough blue to make a shirt, we fly,” Herr Rittmeister had proclaimed from his place at the head of the main table, and
had gone on to say that he would lead the hunt.

Goldstein and the other fliers had cheered. It was good to see their leader smiling. The Herr Rittmeister had recently been
depressed. The Herr Cavalry captain was being forced to fly less due to his administrative duties and the demands of his extensive
propaganda tours back home. In addition, Operation Michael—and its follow-up, assault Operation Georgette, begun on April
7—had not been as successful as the Ministry of Propaganda’s newsrags wanted the rank and file to believe. Despite the facts
that the Russians had disposed of their Czar and there was no longer an eastern front, there was still the inclement weather
to contend with and the fact that the Allies were putting up a stiff land and air resistance. The German advance, meanwhile,
had bogged down as it outran its own artillery and supply support, and as the Fatherland’s soldiers, pushed too far and stretched
too thin, were defeated by their own exhaustion.

When Michael began, J.G. 1 had been stationed at Léchelle, a comfortable, permanent aerodrome the British had only recently
vacated. That first week J.G. 1’s four Jastas flew constantly. It had been the most intense period of fighting in Goldstein’s
ten months at the front, and the hunting had been good. Herr Rittmeister Richthofen’s circus was then ordered farther west
to keep pace with Herr General Ludendorff’s advancing infantry. J.G. 1 had packed itself up onto its horse-drawn lorries and
hurried to this muddy, barren field a few miles north of Cappy, a small, bombed-out village on the Somme. The weather had
immediately turned bad, preventing flying and making daily life a muddy, cold misery that sapped the men’s strength.

But today, true to predictions, by sixteen hundred hours the rain had stopped. The ground crews in their greasy overalls had
fueled the planes and rolled them out to the ready line. The pilots had clustered around Richthofen as he went over the map.
The Air Warning Service’s observers had telephoned from the front that ten British Sopwith Camels and five Bristol F.2b two-seaters
were headed toward J.G. 1’s patrol sector. With around three hours of daylight left the Herr Rittmeister and his cubs could
have themselves a good hunt and be home by dark.

At last it was Goldstein’s turn to take off. He signaled to his ground crew to pull the chocks from the Fokker’s hard rubber
wheels. At once the plane lurched forward, and Goldstein turned it into the wind as he opened his throttle. As his Fokker
gathered speed Goldstein adjusted his goggles against the roaring wind that blew his engine’s putrid exhaust fumes into his
face. He pulled back on the stick and felt his usual thrill as the ground dropped away.

He maneuvered to take his place in the stacked Vee formation of Fokkers circling the field. Herr Rittmeister Richthofen in
his scarlet machine was in the lead—the point of the Vee—with the least experienced pilots just behind and above him. The
most experienced fliers formed the two widened legs of the Vee, highest up in the formation. Goldstein’s place was high up
in the widest part. He was proud that the Rittmeister had assigned him this place of honor. It meant that Richthofen considered
him to be good enough to take care of himself, if need be.

The formation of fourteen airplanes gradually gained altitude. Goldstein could see the drab, smoke-filled valley of the Somme
below. He had sharp eyesight or else he wouldn’t be where he was, so he could make out figures wandering in that desolate,
chocolate-hued mudscape broken by straw-colored patches of dead grass. He could see the twisted trunks of leafless blackened
trees, and, scattered everywhere, the glinting wreckage of killed tanks and who knew what other kinds of ruined machinery—