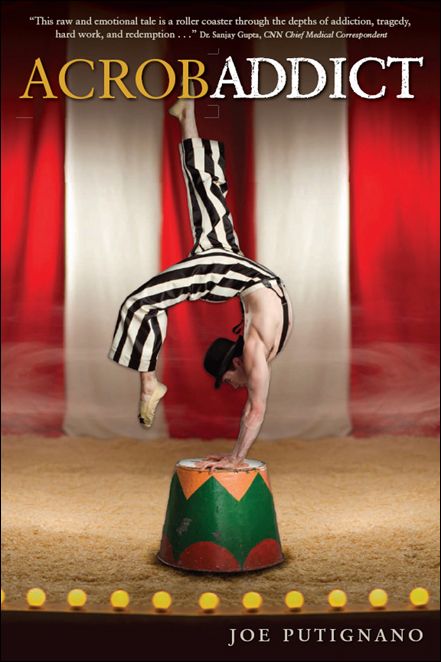 “Joey Putignano tells a harrowing story of a life redeemed at great cost. Try as you follow his words to picture the events—for this is a movie and must be seen to be believed.”

“You will not read a more candid book this year. Prepare to be frightened and taken to the depths of despair and then lifted up triumphantly. It is never too late to hit the reset button on your life—that is what you are about to learn from Joe Putignano. He is equally adept at taking you through the remarkable journey of his own terrible addiction as he is in the world of acrobatics, descending from the Cirque du Soleil big top as a human mirror ball—the figurative spark of change in humanity.

This raw and emotional tale is a roller coaster through the depths of addiction, tragedy, hard work, and redemption that truly reflects Joe’s spirit and determination to stay clean in a world where he is surrounded by temptation. It is proof that with hard work, anything is possible.”

“
Acrobaddict
isn’t just another book about someone who has been to hell and back. Rather, it brings the reader into the emotional world of the addict and the step-by-step process toward an ever-elusive recovery. What I admire about Joe Putignano’s story is the way he drives the reader down the highway of life with exits of temptation along the way. Sometimes you get off on one of those exits, but in the end you find the on-ramp to recovery.”

“Joe Putignano’s story of survival and hope against incredible odds is compelling. Understanding what drove him to drugs and, more incredibly, how he has successfully fought and continues to fight his demons, is the ‘cautionary tale’ that must be shared with everyone. I have had the pleasure of photographing Joe on several occasions, and it has always struck me how his stoicism clearly translates into all his images. His has not been an easy path, but, having witnessed his bravery and fortitude of character, it is one that I find inspiring.”

Central Recovery Press (CRP) is committed to publishing exceptional materials addressing addiction treatment, recovery, and behavioral healthcare topics, including original and quality books, audio/visual communications, and web-based new media. Through a diverse selection of titles, we seek to contribute a broad range of unique resources for professionals, recovering individuals and their families, and the general public.

No part of this publication may be reproduced, stored in a retrieval system, or transmitted in any form or by any means, electronic, mechanical, photocopying, recording, or otherwise, without the written permission of the publisher.

Excerpts from the poem
To This Day
by Shane Koyczan. From the book
Our Deathbeds Will Be Thirsty
.
www.shanekoyczan.com
. Used with permission.

Publisher’s Note:
This is a memoir, a work based on fact recorded to the best of the author’s memory. To protect their privacy, the names of some of the people, places, and institutions in this book have been changed.

Central Recovery Press books represent the experiences and opinions of their authors only. Every effort has been made to ensure that events, institutions, and statistics presented in our books as facts are accurate and up-to-date.

FOR ANYONE WHO HAS EVER WANTED TO DIE
,

WHO HAS GIVEN UP ON THEMSELVES

AND ON THEIR DREAMS
.

FOR THOSE WHO HAVE STOOD IN

THE MIRROR AND THOUGHT:

FOR ALL THOSE WHO HAVE BEEN

Chapter Thirty-eight: The Human Being

I first met Joe Putignano in the fall of 2008 at the Metropolitan Opera in New York City, where he had recently been employed as an acrobat in various opera productions. I had been invited there to stage Berlioz’s
La Damnation de Faust
, the story of an aging man dissatisfied with his life as a scientist who encounters Satan’s envoy, Mephisto, who offers to give him back his youth in exchange for his soul. After leading Faust through the many pleasures of debauchery and the illusions of love, Mephisto deceives him and drags him down the predictable path to Pandemonium, where he is condemned to be consumed by eternal flames. In this piece, Joe played one of the acrobatic devils unleashed from the bowels of the Earth to plague the world with lustful sins; the performers were asked to defy gravity by crawling up and down the abrupt façades of the set.

At the time, little did I know about Joe’s own downward spiral or the nature of the hellish lifestyle from which he had just recently emerged. The young artist I had been introduced to seemed to be a fit and healthy athletic performer with boyish looks, apparently capable of accomplishing any physical task. But his frightened eyes told a whole other story. I noticed that after rehearsals he never joined the cast for a drink, nor did he take part in any of the post-show celebrations organized by the Met. It was only much later when I mentioned this to him that he confessed to me his past tribulations with heroin and his day-to-day struggle to stay in recovery.

For the next few months, Joe and I agreed to further discuss his struggles through a series of emails. There were, of course, occasional meetings where most of the time I sat quietly as a citizen of Thrace
listening to the chilling tale of Orpheus’s return from the underworld and felt that this was definitely something that deserved to be shared with others.

The following year I offered Joe a chance to take part in
Totem
, a new Cirque du Soleil touring show about evolution. This time he was asked to personify the Crystal Man, a luminous entity in the shape of a human mirror ball that opens the show, contorting as he descends from the outskirts of the universe, carrying with him the initial spark that is at the origin of all life forms on our planet. On tour, Joe quickly became the spokesperson for the show and eloquently took advantage of the new public platform to tell his own personal story, inspiring many recovering addicts and giving hope to thousands of substance abusers around the world.

In the past few years I have been a privileged witness to the developmental phases of Joe’s book project, and discovered quite early in the process that he was a gifted writer and a great storyteller. He paints an informed and detailed portrait of a social disease that is the direct consequence of our dysfunctional families, our flawed educational system, and a competitive culture that urges everyone to try to be number one instead of helping one find his or her own uniqueness. I truly believe the reason that Joe’s story will resonate so strongly with people everywhere is that it not only speaks to our addictive natures, but has the courage to raise important existential questions about the lack of meaning and spiritual void that have become so emblematic of our Western societies.

Absolute Zero by Chuck Logan
Body Shot (Tapped Out) by Cari Quinn
Wouldn’t Change a Thing by Stacy Campbell
Overnight by Adele Griffin
Pathfinder by Orson Scott Card
The Bad Wolf by Michelle Clay
White and Other Tales of Ruin by Tim Lebbon
His Jazz Affair by Fife, Nicky
Tempting the Light: Legends and Myths Police Squad (L.A.M.P.S. Book 1) by Bonnie Gill
Murder on the QE2 by Jessica Fletcher
Our partner