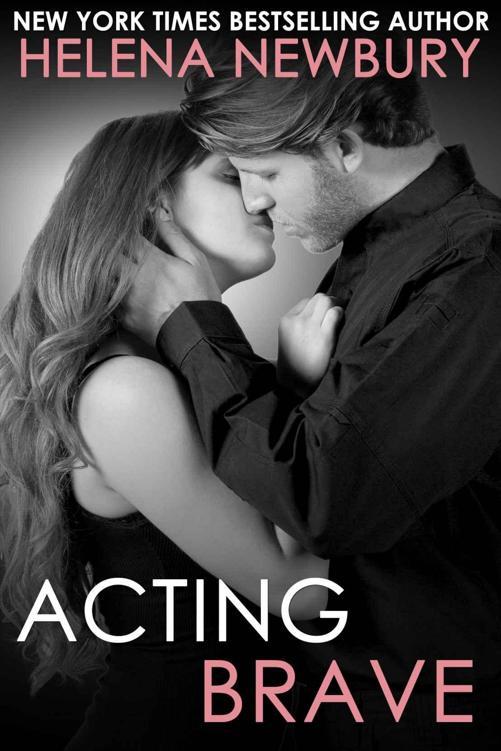 Join my newsletter and I’ll let you know when I release a new book so you can snap it up for 99c on launch day instead of paying full price. You’ll also get “
Losing My Balance
,” the free, exclusive novella that tells Neil and Clarissa’s story.

The right of Helena Newbury to be identified as the author of this work has been asserted by her in accordance with the Copyright, Design and Patents Act 1988

This book contains scenes that may be triggering for survivors of physical abuse and rape.

Aubrey, Andra, Emily, Julianne and Maria for their feedback.

Phil Marley, Devon Mayson and Harry May for the cover photo

But thank you most of all to my readers, who made this series a success.

The Greyhound sped through the night; I huddled in my seat and didn’t move.

Firstly, I didn’t want to interact with any of the other passengers: some sleeping, some talking, some drunk. I didn’t want anyone to ask what the matter was. So I stayed still, the hood of my sweatshirt almost hiding my fact, and hunkered down, staring out of the window.

Outside were endless plains—Ohio, I figured, by now. Every mile pushed Chicago a little further behind us, but it was like being an ant crawling away from a huge, hovering foot that could come down and crush me at any time. A mile didn’t make a difference. A thousand miles wouldn’t make a difference. So, secondly, I sat there frozen, sick with fear, waiting for his car to blast past the bus. Even if I didn’t see it happen, I’d still tense up every time we stopped, in case he’d somehow gotten ahead of us and was waiting for me.

But the main reason I didn’t move is that I couldn’t. Twisting shifted my ribs, which I figured were cracked again. Standing meant the bruises on my thighs and ass woke up and started throbbing again, a wash of raw pain that brought tears to me eyes.

So I sat there like a statue and I waited.

And I prayed he’d never find me.

All cities are ugly at dawn. The flaws hidden by the night—the drunks and the addicts and the homeless—are still there, but now cruelly exposed. The streets are clogged with overflowing trashcans and the air’s alive with last night’s discarded strip club flyers.

New York was beautiful. In my eyes, there were no flaws. Everything was fresh and clean and new, because I was seventeen hours away from Chicago. I watched the sun turn the windows of skyscrapers into gleaming gold. My own reflection, a slightly top-heavy girl with her red hair pulled back into a ponytail, was barely visible, and I was glad of that.

I had a lot to do. I even had a list. But I allowed myself two indulgences, a little celebration of having made it out. First, a warm sourdough pretzel from a street vendor, together with a cup of coffee that was the best thing I’d tasted in days.

Second, I shouldered my pathetically small backpack and hiked all the way down to Battery Park. I stood and looked out at the Statue of Liberty and, once I’d checked that I was the only person in sight, I did something I hadn’t allowed myself to do for a long time. I cried.

The first thing I needed was a place to stay. Chicago had taught me that money can buy anything, if you find the right sort of person. Even in a strange city, my life had attuned me to be able to find them. A sort of homing instinct that took me straight to a seedy motel where there wouldn’t be any questions.

I hadn’t slept for two nights and I was practically hallucinating. But before I crashed out, there was one last thing I had to do. I pulled the Polaroid camera from my backpack and took off all my clothes. And then, using the self-timer, I took photos of everything he’d done to me.

In the room, the threadbare curtains safely closed, I opened my backpack and looked underneath the concealing layer of clothes. Six thick rolls of greasy bills. Enough to pay my tuition and rent a place—not a nice place, but a place—for at least a few months, until I could find a job. By September, when the academic year started, I could be all settled in.

You can’t just change your name. You have to alert people by putting your intended change in the local newspapers for a set period of time, so that people can still find you.

I didn’t want anyone to find me.

I knew that I needed to meet with a judge to get a special court order that would allow me to make the change without telling the press, and then seal the order so that no one could find out. To do that, I had to explain why my safety was in danger. And there was no way I was going to tell the truth.

First, know your audience. The judge, sitting slightly impatiently in his book-lined chambers, looked to be in his sixties. The photos on his desk told me he had children and grandchildren. The dusty computer and the overworked assistant told me he didn’t like technology. A family man, then, and a traditionalist. He’d have strong views, which would make it easier.

His eyes flicked over my crumpled sweatshirt and ripped jeans, but I didn’t feel that blast of male lust I get when a man’s checking me out. He wasn’t turned on by a scared eighteen year-old girl, then. If he had been, it wouldn’t have surprised me. I was a long way past trusting anyone associated with the system.

If anything, he looked concerned. I saw his eyes flick to one of his framed photos. He saw me as a younger version of his daughter. Perfect.

“There’s this guy,” I told him. I was inventing as I went, creating the ideal monster for him to hate, one perfectly suited to his prejudices. So far, the man in my mind was just a big, muscled, amorphous mass.

“Someone you know?” the judge asked, leaning forward. “Family?”

“My ex-boyfriend,” I said in a small voice.

The judge took a breath. Just the tiniest intake of air, but I knew what was coming. A lecture on personal responsibility and how I should face up to the man through the courts, so he didn’t hurt anyone else. He needed a push.

“My—my daddy,” I choked out, my voice breaking, “he tried to warn me. He—said he was trouble.”

The judge’s face darkened.
Bingo.
He’d been that father, ignored by the wayward daughter. He was going to go into full-on Papa Bear protective mode. He just needed a little push.

I’d done my homework, of course. That morning in the library, I’d worked through every case he’d presided over in the last year and noted which races got the harshest sentences. I knew exactly how to light his touch paper. The tears were running down my cheeks, now, and they weren’t faked. All I had to do was let about one percent of the pain I felt inside seep to the surface.

“He—he’s called Carlos,” I told the judge, squeezing the words out between sobs.

I saw the change in his face, the deep-seated racism he probably wasn’t even aware of making his forehead and cheeks flare red. I had him, but there was still a danger he’d insist on righteous justice, on pursuing the mythical Carlos instead of shielding me from him.

“He’s always moving,” I said quickly. “Always on the road. He doesn’t have an address, so the police can’t catch him. And I think he might come to New York.” I sniffed. “I—I want to make a fresh start, and go to college, and—”

The judge gave the tiniest shake of his head, probably unconscious. He was winding up to give me a speech about putting Carlos behind bars.
Quick! Push him over the edge!

“He did this to me,” I blurted, and scattered the Polaroids across his desk.

He lurched backward as if burned. My naked breasts, black with bruises. A purple foot mark across the creamy white of my ass cheeks. More bruises on my thighs, my sex visible at the top of the photo. The judge closed his eyes, but it was too late—he’d glimpsed the body of the girl sitting across the desk, and his face was crimson with embarrassment. “I don’t need to see that!” he snapped. “Put them away!”

I gathered the photos up, nodding as if ashamed, which I knew would make him feel even guiltier. When he finally brought himself to look at me again, I could see the burning anger in his eyes. The judge was well into his sixties and not much bigger than me but, if my abuser had been in the room with us, right at that moment, the judge wouldn’t have let him out alive.

I’d brought the judge to exactly where I wanted him. I could feel the rage and guilt pouring off him. Some bastard—
some bastard his precious justice system couldn’t catch!
—had done awful things to me—in his mind,
his daughter!
He’d failed to protect me. But he could at least see I was protected in the future.

He could barely keep his voice level as he signed my court order. “Do you know the name you want, Emma?” he asked. “Surname first.”

“Kane,” I told him. I figured that was simple and easy to remember and different enough from my old name—MacGinnis.

I’d decided years ago, a teenage dream that became a hope to cling onto and finally became a desperate, last-ditch plan. “Jasmine,” I told him. “I want to be called ‘Jasmine.’”

I knew exactly what I was going to do. Back in Chicago, I hadn’t dared send off for a brochure from Fenbrook Academy, in case my dad saw it. I’d kept my dream locked away in my head, something to be brought out in the dead of night, when I lay awake with tear-wet cheeks. Now, it was becoming real. The first time I walked past the red brick building and touched the polished plaque, I almost started crying again.

It was only May. I had almost four months until the fall semester began and I could start as a freshman. That gave me plenty of time to get ready.

I found an apartment. The landlord was a sleazebag, but I figured it was an acceptable risk. I was naive enough to think, back then, that I’d soon trade up to somewhere nicer.