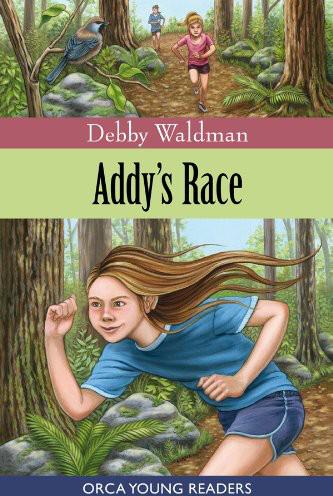 Summary
: Addy joins her school’s running club and learns not only is she a great runner, but she can also be assertive and let others know there is more to her than hearing loss.

Orca Book Publishers is dedicated to preserving the environment and has printed this book
on paper certified by the Forest Stewardship Council
®
.

For Elizabeth and Noah

You would not believe how many people expect me to be like Helen Keller. Not the blind part—it’s obvious I’m not blind. I’m not banging into walls or carrying a cane or being led by a dog wearing a harness. I don’t even need glasses.

And it’s obvious I can talk. As soon as anyone asks, “Don’t you speak sign language?” (usually while waving their hands around as if
they’re
speaking sign language), I say, “I don’t have to. I’m not deaf. I hear fine with my hearing aids.”

Then they act surprised. The ones who watch the Discovery Channel ask, “Why don’t you have those bionic things for your ears?” They’re talking about cochlear implants. I want to say, “Are
you
the one with the hearing problem? Cochlear implants are for deaf people. I just told you I hear fine with my hearing aids.”

When I say that—minus the first sentence—they act disappointed, as if I said there’s no such thing as Santa or the Tooth Fairy. As if it would be better if I couldn’t hear at all.

The people who feel sorry for me are worse. It’s not as if I’m dying of cancer or can’t walk or have flippers for arms. I can’t hear as well as most people, that’s all.

Last week an old woman in the grocery store looked at my hearing aids and said, “Oh, you poor dear! It must be so difficult for you.” I wanted to say,
Wait till you get hearing aids. It’s going to be a lot
more difficult for you—you’ll have to get used to them.
I’ve been wearing them my whole life.

But instead I put on my sweet Addy face and said, “Thank you.” I don’t think my mother even heard the old woman talking to me. Which is a good thing. If she had, she would have launched into her “How I Found Out about Addy’s Hearing Loss and What a Tragedy It Was for Me” story, in which she is the heroine with a handicapped child and my role is to generate pity for her.

My mother was an actress before she married my father. She was in commercials for dishwashing soap, laundry detergent, canned soup and salad dressings. She says making the ads prepared her to be a stay-at-home mom.

I think she misses being in front of the camera. When she talks about how she found out about my hearing loss, she gets very dramatic. This is how she starts her story: “When we brought Addy home from the hospital, Rick (that’s my dad) rang a bell next to her ear. When she didn’t turn her head, he said, ‘I don’t think she can hear,’ and I said, ‘Rick, she’s four days old. No four-day-old baby can turn her head!’”

If my father is nearby, he smiles as if he’s thinking, There she goes again. I roll my eyes. My mother never notices.

The second part of her story goes like this: “When Addy got a little older, Rick got upset because she didn’t greet him at the door. I said, ‘Rick, she’s not like the dogs you grew up with. She’s not going to run to the door with your slippers and the newspaper as soon as you come home.’”

I don’t know what she’s talking about. Even on television, I’ve never seen a dog run to a door with slippers and a newspaper. The dogs I know eat slippers and pee on newspapers.

The third part of my mother’s story makes me the maddest: “When Addy was a year and a half, Rick came home from a business trip and all he could talk about was how the baby next to him could make animal noises. As if somehow I had failed as a parent because I hadn’t taught our daughter to moo, bark and oink.”

This is where I want to say,
No, Mom. I failed. Me.
Addy. Not you
. But it’s her story. Fortunately I can turn off my hearing aids, so I don’t have to listen.

“You are so lucky,” my best friend Lucy says when she picks me up on the first day of school. “I wish I could turn off my mother.”

“What did she do this time?”

I feel bad for Lucy. Her mother, Joanne, is a jock. She runs about ten miles a day, more if she’s training for a marathon, triathlon or biathlon—any kind of “on” that involves sweating and a finish line.

She’s trying to make Lucy into a jock, but Lucy doesn’t even like gym. She’s the biggest girl in our school. She’s as tall as some of the teachers, and she’s not even twelve. My mother says she’s solid, “like a farmer’s wife.” She said that to my aunt on the phone when she thought nobody was listening.

Lucy thinks she takes after her father. I’ve seen pictures of him. He does kind of look like a farmer. He died of a heart attack when Lucy was four.

Joanne says there’s nothing wrong with Lucy’s heart, it’s just that she doesn’t want to try. That’s not true. Lucy will try anything, but why should she join a club she’s not interested in? One thing about Joanne though—she’s stubborn. So Lucy is stuck in running club.

I nodded, wishing I could take it back. Running makes me sweat, and sweat makes my hearing aids slimy. Plus, I’m not very fast. Then again, neither is Lucy.

“You know who’s going to be in running club this year?” Lucy said.

Before I could guess, Stephanie and Emma appeared on either side of us. Stephanie looked at Lucy and said, “Hey, my mom says you’re joining running club.”

She was acting so friendly, if you didn’t know better, you’d think she was nice. But Stephanie and Emma are never nice. They think they’re better than everybody. And because they dress alike and wear their hair the same way and spend all their time together, they’re like one person in two bodies, which means they take up twice as much space, like some kind of superhero, but not the good kind. I think of them as Stem. Like part of a plant. A stinkweed plant.

They always behave around teachers, so teachers love them. If you get stuck doing a project with them, they’ll suck up to you until you end up doing the work, which frees them to brush their hair, compare notes about what their mothers bought them at Aritzia and lululemon, and flirt with boys.

They were the most irritating people in grade five. Also grades four, three, two, one and kindergarten. The first day of school hadn’t officially started yet, and already it looked as if they were going to win the award again for grade six.

“You’re not even good in gym,” Emma said. “Why would you want to be in running club?”

Kidnapped by the Greek Billionaire by Lyndhurst, Rachel
Empress of the World by Ryan, Sara
Shadows of Sherwood by Kekla Magoon
Courting Trouble (Reality Romance Book 5) by Lizzie Shane
Costume Not Included by Matthew Hughes
John Aubrey: My Own Life by Ruth Scurr
A Season of Miracles by Heather Graham
A Rancher for Their Mom (Rodeo Heroes) by Leann Harris
The Whispering House by Rebecca Wade
Twelve Red Herrings by Jeffrey Archer
Our partner