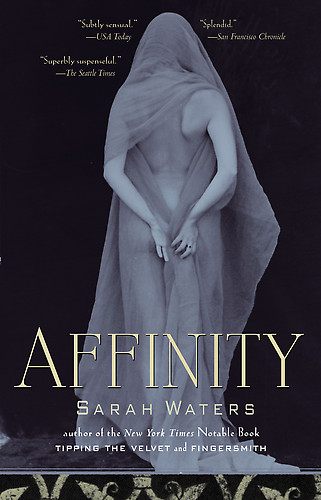 Affinity
is a tale of power and possession that Henry James himself might admire. In her first novel, __, Sarah Waters explored secrets and longing--capping off this lesbian romp with a utopian-socialist vision. Her intricate follow-up is just as sensual but infinitely darker, its moral more difficult to descry. Its stylistic and psychological rewards, however, are visible at every turn, the author's persuasive imagination matched by her gift for storytelling.

In late September 1874, Margaret Prior makes her way through the pentagons of London's Millbank Prison, a place of fearful symmetry and endless corridors. This plain woman on the verge of 30 has come to comfort those behind bars, several of whom Waters brings to instant, sad life. And our Lady Visitor plans to take her role dead seriously, having recovered from two years of nervous indolence in her family's Chelsea house. One person, however, makes her job a passion. Opening an inspection slit (or "eye" as these devices are known), Margaret hears "a
perfect
sigh, like a sigh in a story." Peering inward, she's confronted by the most erotic of visions--a woman turned toward the sun, caressing her cheek with a forbidden violet: "As I watched, she put the flower to her lips, and breathed upon it, and the purple of the petals gave a quiver and seemed to glow..."

Selina Dawes may indeed have the face of a Crivelli angel, but this medium is in for fraud and assault, her last session having gone very badly indeed. Suffice it to say that the first full encounter between these two very different women is enthralling. "You think spiritualism a kind of fancy," Selina riddles. "Doesn't it seem to you, now you are here, that
anything
might be real, since Millbank is?" And soon enough Margaret receives several viable signs of the supernatural: a locket disappears from her room, flowers mysteriously appear, and her dazzling friend knows everything about her. Strangest of all, Selina seems to love her.

As Margaret records her weekly prison forays, her own past comes into focus, notably her plans to travel to Italy with her first love (who is now her sister-in-law). But her current journal, she convinces herself, is to be very different from her last one, which "took as long to burn as human hearts, they say, do take." Meanwhile, Waters offers a narrative two-for-one, placing Margaret's diary cheek by jowl with Selina's chronicle of her pre-Millbank existence. This dispassionate, staccato record initially suggests that we can separate truth from desire. Or can we? What Waters's haunting creation leaves us with is a more painful reality--that knowledge and belief are entirely different things.
--Kerry Fried

Her first,
Tipping the Velvet
, was good; her second is just terrific. Moody, haunting, and haunted (it's about love among Victorian spiritualists),
Affinity
is two parts Wilkie Collins, with whose
The Woman in White
it shares an obsession with prisons, madness, journal-keeping, and elaborate, carefully engineered deceits; and just a dash of Jeanette Winterson for up-to-the-minute lesbian-historical-fiction flavor. ("He, she--you ought to know that in the spheres there are no differences like that.")

All rights reserved. This book, or parts thereof, may not
be reproduced in any form without permission.
Published simultaneously in Canada

I was never so frightened as I am now. They have left me sitting in the dark, with only the light from the window to write by. They have put me in my own room, they have locked the door on me. They wanted Ruth to do it, but she would not. She said ‘What, do you want me to lock up my own mistress, who has done nothing?’ In the end the doctor took the key from her & locked the door himself, then made her leave me. Now the house is full of voices, all saying my name. If I close my eyes & listen it might be any ordinary night. I might be waiting for Mrs Brink to come & take me down to a dark circle, & Madeleine or any girl might be there, blushing, thinking of Peter, of Peter’s great dark whiskers & shining hands.

The 39 Clues Invasion by Riley Clifford
The Target Committee (Kindle Single) by Paul Ham
The Apostrophe Thief by Barbara Paul
Lois Greiman by Bewitching the Highlander
The Reluctant Communist by Charles Robert Jenkins, Jim Frederick
You Only Love Twice by Elizabeth Thornton
StrategicLust by Elizabeth Lapthorne
Rite of Summer: Treading the Boards, Book 1 by Tess Bowery
In the Claws of the Eagle by Aubrey Flegg
Sweet Blood of Mine by John Corwin
Our partner