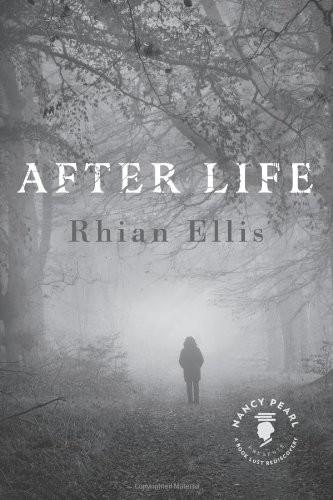 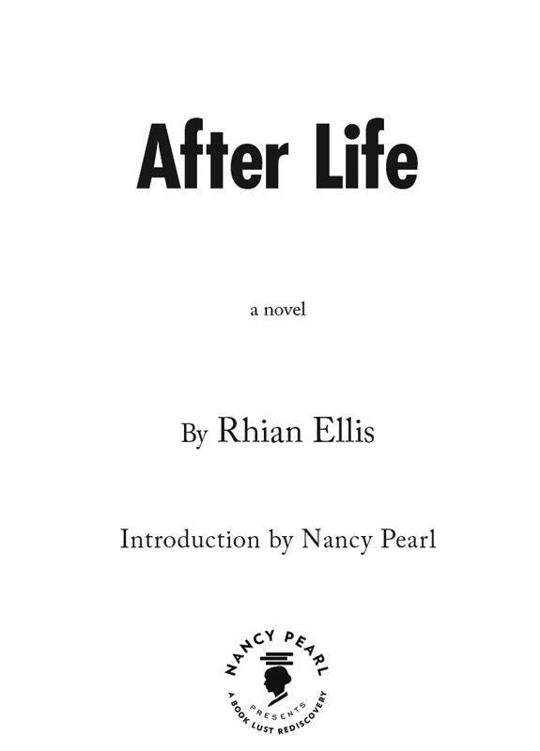 for Diane Vreuls and Stuart Friebert
and my parents, Sally and Robert Ellis,
with love

Spiritualism is a philosophy, science, and religion founded in the nineteenth century and still practiced by many thousands of people across the world. This book, however, is a work of fiction, and the specific principles and beliefs set forth here are not meant to represent those of any particular group, sect, church, or person.

Among the books I consulted while writing this novel are
Thirty Years of Psychical Research
by Charles Richet;
Zolar’s Book of the Spirits
by Zolar;
The Science of Seership
by Geoffrey Hodson;
The Law of Psychic Phenomena
by Thomson Jay Hudson;
Beware Familiar Spirits
by John Mulholland; and
The “I AM” Discourses,
volume 3, by the Ascended Master Saint Germain.

For help with research into Spiritualism, thanks to my sister and brother-in-law, Laura and David Goodworth. For New Orleans info, thanks to Mary Bosworth.

And for other kinds of help, thanks to: Julie Grau, Lisa Bankoff, Mary Evans, Lisa Dicker, Alex Babanskyj, Rebecca James, Ed Skoog, Jill Marquis, and Leslie Van Stavern Millar II of the Brunswick Building in Missoula, where this was written.

Deepest thanks to Betsy Lerner, to Carole DeSanti, and to John.

7 there’d always been deer heads in the ha-ha

9 she was more than a glimmer

Readers’ Guide for After Life

Rhian Ellis’s debut novel,
After Life
, is one of the books that always comes to mind when I tell my students at the University of Washington’s Information School that no two people ever read the same novel (and, moreover, that no one ever reads the same novel twice). What I mean by this is, of course, that a novel, as a work of art, is not something that should be simply and passively received, or absorbed, by a reader. (Is this perhaps an essential part of what it
means
to be a work of art? I think so.) When we read a novel, we all bring ourselves—our thoughts, our feelings, and our experiences—to the pages of the book. And those thoughts, feelings, and experiences are, of course, different from one reader to the next. In a very real sense, then, we collaborate with the novelist in writing the book we’re reading. (Novelist Paul Auster expressed the essence of what I have in mind here with admirable conciseness in his book
The Art of Hunger: Essays, Prefaces, Interviews
when he wrote: “The one thing I try to do in all my books is to leave enough room in the prose for the reader to inhabit it. Because I finally believe it’s the reader who writes the book and not the writer.”)

After Life
is a strange and wonderful novel that I found myself inhabiting. The “roominess” in its prose is reflected in how difficult it is to categorize. When I first read it in 2000, shortly after it was first published, I remember wondering if there was any other contemporary novel that could be read in such a myriad of ways. I couldn’t come up with one. Is
After Life
psychological suspense, like the novels of Barbara Vine or Shirley Jackson? Is it a tale about the often fraught relationship between mothers and daughters, like Carol Shields’s
Unless
or Gail Godwin’s
A Mother and Two Daughters
? Or is it a coming-of-age novel, such as
The Little Friend
by Donna Tartt or
Ellen Foster
by Kaye Gibbons? Or might it be a “whydunit” sort of mystery, in the manner of Elizabeth George’s
What Came Before He Shot Her
or Ruth Rendell’s
A Judgement in Stone
? (It’s certainly not a “whodunit,” since we know from Ellis’s wonderful opening line, “First I had to get his body into the boat,” that a killing has occurred, and there’s no doubt about who committed it—the title of the first chapter is, after all, “what I did.”)

You might think that the strangeness of
After Life
is due simply to the strangeness of many of its characters, who are mostly involved with the spirit world in one way or another as clairvoyants, mediums, fortune-tellers, psychics, and such. But for me it was mostly the ambiguity, the slipperiness, of the novel’s narrator, Naomi Ash. (Ah, Naomi! I simply didn’t know what to make of you.) Normally, I must confess, I don’t do well with ambiguity. I would really rather know how a book ends before I begin it, and I all too often feel the urge—not always resisted successfully, alas—to peek at the last chapter immediately upon finishing the first, simply to relieve the tension. That’s why I tend not to enjoy novels with unreliable narrators. The uncertainty makes me too nervous. In order to allow myself to be absorbed into the voice of the narrator (or to have the narrator’s voice absorbed into me)—which for me is at the heart of the pleasure of reading—I need to believe that he or she is telling me the truth, or at least attempting, in good faith, to do so. (Thus my fascination, and love/hate relationship, with memoirs, where this is always an issue.) So Naomi both fascinated me and made me extremely uncomfortable, because I just couldn’t tell how reliable she really was as a narrator.

Everything she related, from the disposal of the body in the first chapter to the resolutions of the last, sounded so plausible. Perhaps too plausible? I just couldn’t shake off the niggling questions that arose: Has Naomi really told us everything that she could have about her childhood? And her relationship to Peter (the body she’s trying to get into the boat)—has she told us all that we need to know about his death? And if not, might the book mean something entirely different than what I thought? And then I realized that that uncertainty—what kind of book am I reading? what is Naomi really like?—despite my discomfort with it, is a major reason why I fell under the spell of
After Life
and why I knew I had to include it in the Book Lust Rediscoveries series.

After Life
held other delights for me as well. The way an author uses language is always important to me in the books I choose to read. I realized a long time ago that, of all the books I’ve most enjoyed, the vast majority are characterized by their authors’ ability to put words together in ways that surprise and enchant me, ways that cause me to look at the world as I never had before. Invariably, there are sentences and paragraphs in these books that I am compelled to read aloud to my husband (or whomever happens to be close by), post on the bulletin board in my office, and copy into the by now multi-volumed set of notebooks I have kept for years and years, which contain my favorite poems and lines from the books I’ve loved, to be read to myself when I need comforting or aloud, by my husband, to help me fall asleep.

Here are two of the lines from
After Life
I wrote down in 2000 in my notebook. One is, I think, central to understanding Naomi, while the other I am drawn to simply because it puts into words an inchoate feeling I’ve often had.

The first: “My mother began in honesty and ended in fraud; I began in fraud and ended in something at least close to truthfulness.”

And the second: “…and I felt a small but swelling happiness, the kind that comes from a smooth carrying-out of an errand.”

Finally there is Ellis’s evocation of the setting of
After Life
. Although I am a novel reader who, as might be apparent by now, tends to pay more attention to character development and agility with language than a novel’s setting (unless I’m reading historical fiction), I found it impossible not to be wowed by the way Ellis brought the upstate New York town of Train Line to life. Train Line is based on the real community of Lily Dale, New York, which I felt I had heard of before I read Ellis’s novel. But maybe not. I’d certainly never felt any particular urge to visit there until after my first reading of
After Life
. When I finished the novel, I actually sat down at my computer and tried to figure out how many planes, trains, and buses it might take for me to get there from Seattle. (And believe me, it was much harder to get that kind of information in 2000 than it is today.) I still Google Lily Dale occasionally, noting with a skeptic’s delight that I could obtain a list of all the registered mediums in town, should I ever feel the need to consult with one. I have yet to make the trip, in part, I think, for fear that the possibly mundane reality of Lily Dale would mar the wonder of Train Line and of the young woman at the center of this unforgettable tale (written by Rhian Ellis—and me).

I hope you enjoy
After Life
as much as I did.

First I had to get his body into the boat. This was more than ten years ago, and I’ve forgotten some of what came before and after, but that night and the following day I remember in extravagant detail. I had lain awake all night, trying to imagine how I might get him off the bed and down the stairs and into the rowboat, since he weighed at least a hundred and fifty pounds and might have gone stiff. My bed, I remember, felt absurdly uncomfortable, as if someone had slipped walnuts and bolts into the layer just beneath the ticking, and there was something sharp and prickly, like hay, poking out of my pillow into my face and neck, yet I hardly moved all night. Every noise paralyzed me with fear. I had to force my eyes shut to think, literally hold them shut with my fingers, and in this way I worked through the problem—getting him into the boat—over and over again, allowing for variations, so that by morning I was pretty sure I had it down. Once he was in the boat it would be easy.

Ink Spots by Lissa Matthews
The Hounds of the Morrigan by Pat O'Shea
Bartleby of the Big Bad Bayou by Phyllis Shalant
Fitness 4Play: One Night Stand (Novel 1) by Marcus Woods
The Dark Brotherhood by August Derleth, H. P. Lovecraft
The Right Kind of Trouble by Shiloh Walker
Shadow on the Land by Anne Doughty
Taming the Night (Creatures of the Night Book 1) by Tisha Wilson
Abuse of Power by Michael Savage
Force Majeure by Daniel O'Mahoney
Our partner